Last year, when Blue Water Baltimore discovered that the city’s Back River and Patapsco wastewater treatment plants had been releasing millions of gallons of partially treated human waste into area waterways – in some cases, 400% above permit limits – the natural question arose:

“Where has the oversight been?” Blue Water’s Baltimore Harbor Waterkeeper Alice Volpitta asked at the time.

A likely answer comes from a new report:

It has steadily declined over the last two decades and plummeted sharply during the Hogan administration.

That was the conclusion reached by five nonprofit organizations that came together to analyze inspection and enforcement actions by the Maryland Department of the Environment (MDE) during the last four governors going back to 2001.

“Water pollution enforcement took a dramatic nosedive in the past six years under Governor Hogan,” said Courtney Bernhardt, director of research at the Environmental Integrity Project.

“MDE needs to staff up and turn these trends around.”

Among the report’s findings:

• In fiscal 2020, MDE only inspected 2,296 water-related sites, a record low over the past two decades. During the administration of Parris N. Glendening in the early 2000s, the agency averaged 8,000 inspections per year.

• There were some slight drops in enforcement during the 2008 recession, according to the Chesapeake Accountability Project (CAP) “Enforcement Scorecard,” but it was the decline between the administration of Martin O’Malley and Larry Hogan that was most dramatic.

The analysis found that MDE’s Water and Science Administration division under Gov. Hogan has: 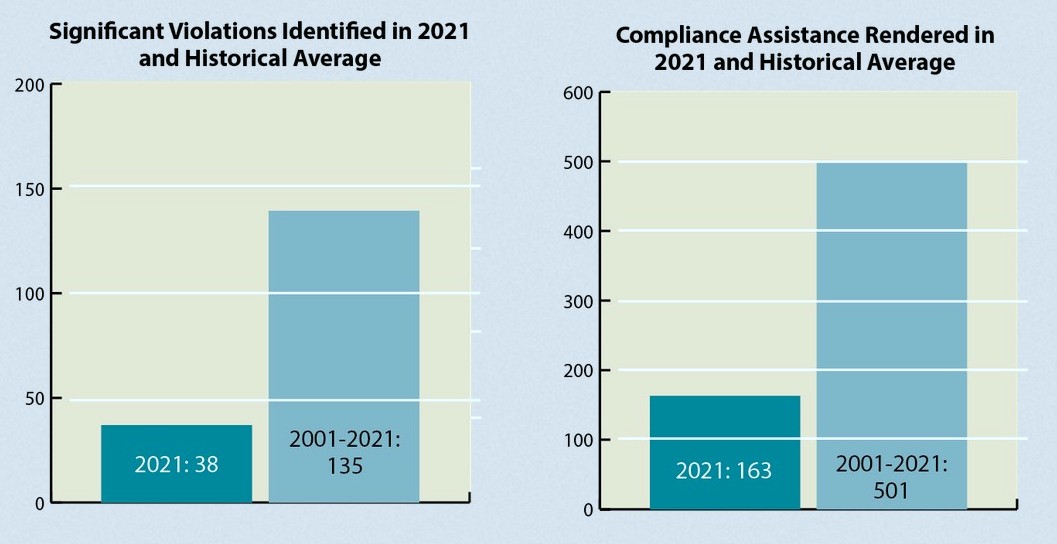 The report’s authors, releasing their findings this morning, faulted MDE for failing to crack down on “rampant non-compliance” with industrial stormwater permits.

Whenever it rains or snows at auto salvage yards, processing plants and landfills, harmful chemicals, heavy metals and toxic compounds end up off-site in local waterways through stormwater.

Between 2017 and 2020, roughly three-quarters of inspections found that industrial facilities with stormwater pollution permits were not complying with the permit terms.

But during that period, MDE took formal enforcement actions against less than 1% of non-compliant sites.

“MDE has not been afforded the courtesy of a pre-review of the report and is unable to provide a specific response,” said communications director Mark Shaffer in an emailed statement.

“The department’s focus is on protecting public health and keeping Maryland communities clean and safe, starting with those under-served or overburdened with pollution and utilizing a balanced and common-sense approach.”

Under Hogan, MDE uses a “compliance assistance approach” to enforcement, meaning a non-compliant entity is allowed to send written documentation that the correction has “been made or commenced,” Shaffer said.

Under MDE’s regulatory approach, a non-compliant permit holder can submit documentation that corrections have been made or commenced.

But the data leave “unclear whether MDE verifies the written documentation in any way,” the CAP analysis concluded.

The report faulted another strategy it said MDE has increasingly employed – delegating enforcement responsibilities to local jurisdictions, but without either increasing financial support or ensuring sufficient oversight.

Reduced enforcement could also be seen in the drop in fines collected from polluters.

From the 2022 CAP Enforcement Scorecard. (chesapeakeaccountability.org)

Declining resources are one explanation for diminished enforcement, the report said.

MDE lost one out of every seven positions between fiscal year 2002 and 2022. Its budget shrunk by about a third during that time.

The agency has half the share of funds it received two decades ago.

The number of pollution inspectors has declined from 62 inspectors in 2000 to 50 in 2019 despite more permits being approved in the state. This has resulted in widespread noncompliance among various sectors

The authors called on lawmakers to increase funding for staffing at the agency.

Asked how the Back River and Patapsco wastewater case illustrate the report’s findings, the authors declined to go into specifics, citing pending litigation.

Chesapeake Legal Alliance (CLA) has filed a lawsuit on behalf of Blue Water Baltimore against Baltimore City for violations of the Clean Water Act. MDE later filed legal action against the city for the failures at the plants.

But the authors did have an opinion on MDE’s general responsibility for identifying longstanding violations there, and acting to prevent massive discharges.

“Here we have a nonprofit organization [Blue Water Baltimore] identifying a violation and bringing it to the attention of the agency,” said Eliza Smith Steinmeier, co-executive director at CLA.

“When it should be the agency which has regular touch points with regulated entities, who should be catching these violations well before they become the problems that they have in this case,” she continued, “so that pollution wouldn’t enter the waterway.”