Assembling for the first time in-person after two years of virtual meetings only, City Council members emerged from their basements and home offices last night almost giddy to find themselves in their ornate chambers at Baltimore City Hall.

Some held forth for television crews about the momentous occasion, while others chuckled over usually casually dressing colleagues (like Councilman Ryan Dorsey) spiffed up in sports coats and neckties.

Several buzzed over the swag bags placed on their desks. Each contained a black-and-gold cellphone stand, a pen and a lapel pin, all inscribed with the same words:

“It’s my pleasure and honor to formally welcome you home,” Mosby boomed at the start of the meeting, drawing applause. 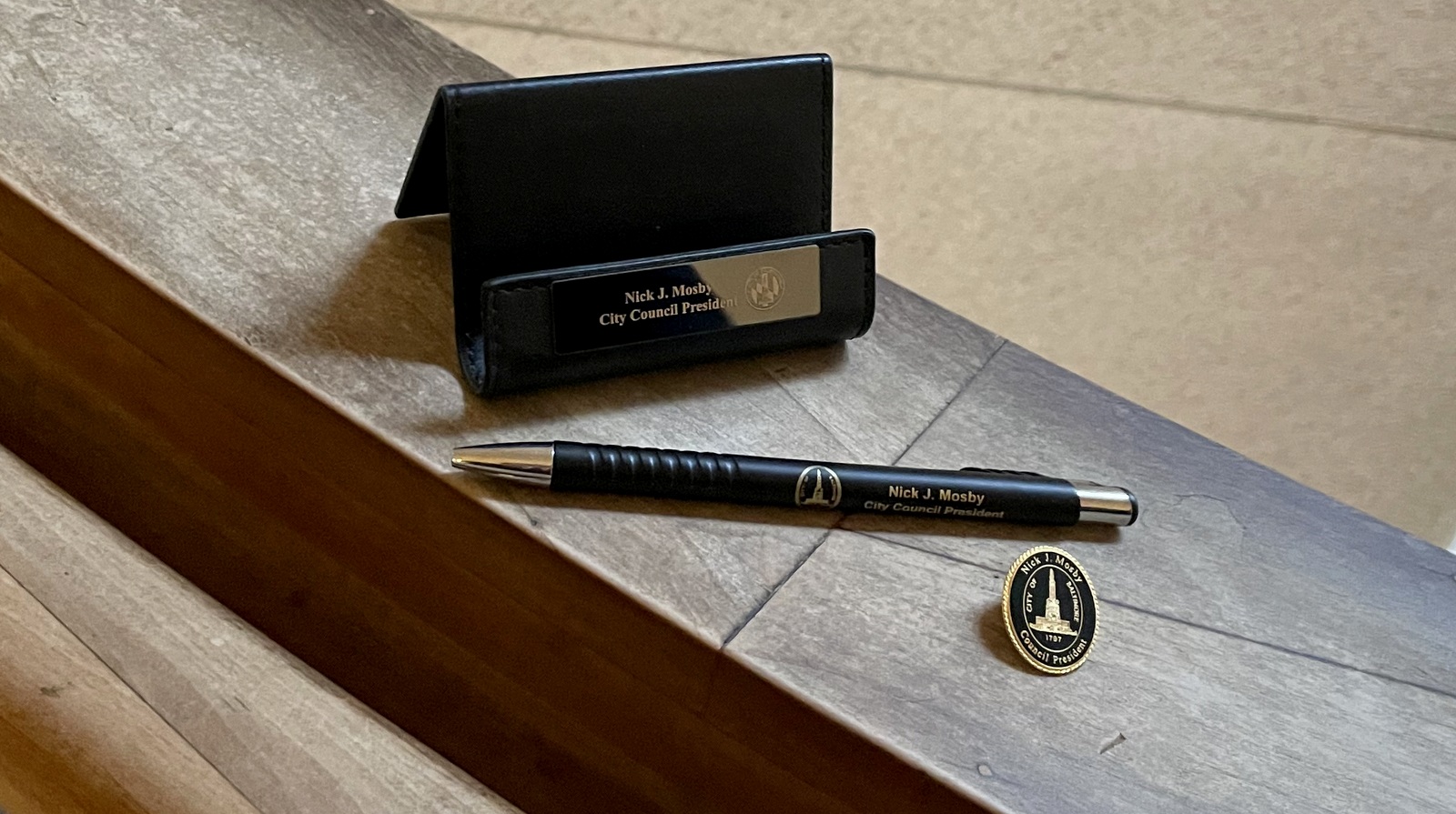 Death of a Homeless Woman

Also welcoming the lawmakers, but in some cases not so jovially, were members of the public who have been unable until last night to buttonhole their representatives in person. There were dozens of people in the audience, including many community members.

What’s up with the Sisson Street Bridge? That was the question Remington resident Joan Floyd put to representatives Odette Ramos and Robert Stokes after the meeting broke up.

“DOT still hasn’t effectively blocked it off, even though they closed it precipitously weeks ago after suddenly declaring it unsafe for all types of traffic,” Floyd explained to The Brew later.

“Is it unsafe or isn’t it?” Floyd wanted to know.

Another audience member had an even more dire issue to raise.

“Not a word tonight about the woman who died,” a woman remarked to no one in particular.

She and homeless advocate Christina Flowers approached Mosby as he headed toward a side door to tell him about a homeless person who died Saturday at a downtown encampment near the Fallsway.

“It was Miss Linda. She died in her tent,” Flowers said. “That’s, like, the fifth homeless person to die in the last month.”

“It was Miss Linda. She died in her tent. That’s, like, the fifth homeless person to die in the last month”  – homeless services provider Christina Flowers.

Flowers said Linda Mull was born in 1963, but she was uncertain about other details, including what caused the woman’s death, saying, “She was unresponsive when I got there.”

Flowers said she spoke to Mosby and other city officials about what happened after the meeting, but wasn’t sure what would come of it.

“They just listened,” she said.

(Flowers is holding a press conference this morning at 10 a.m. at Fallsway and East Lexington Street to remember Mull and call attention to the latest death of a homeless person.) 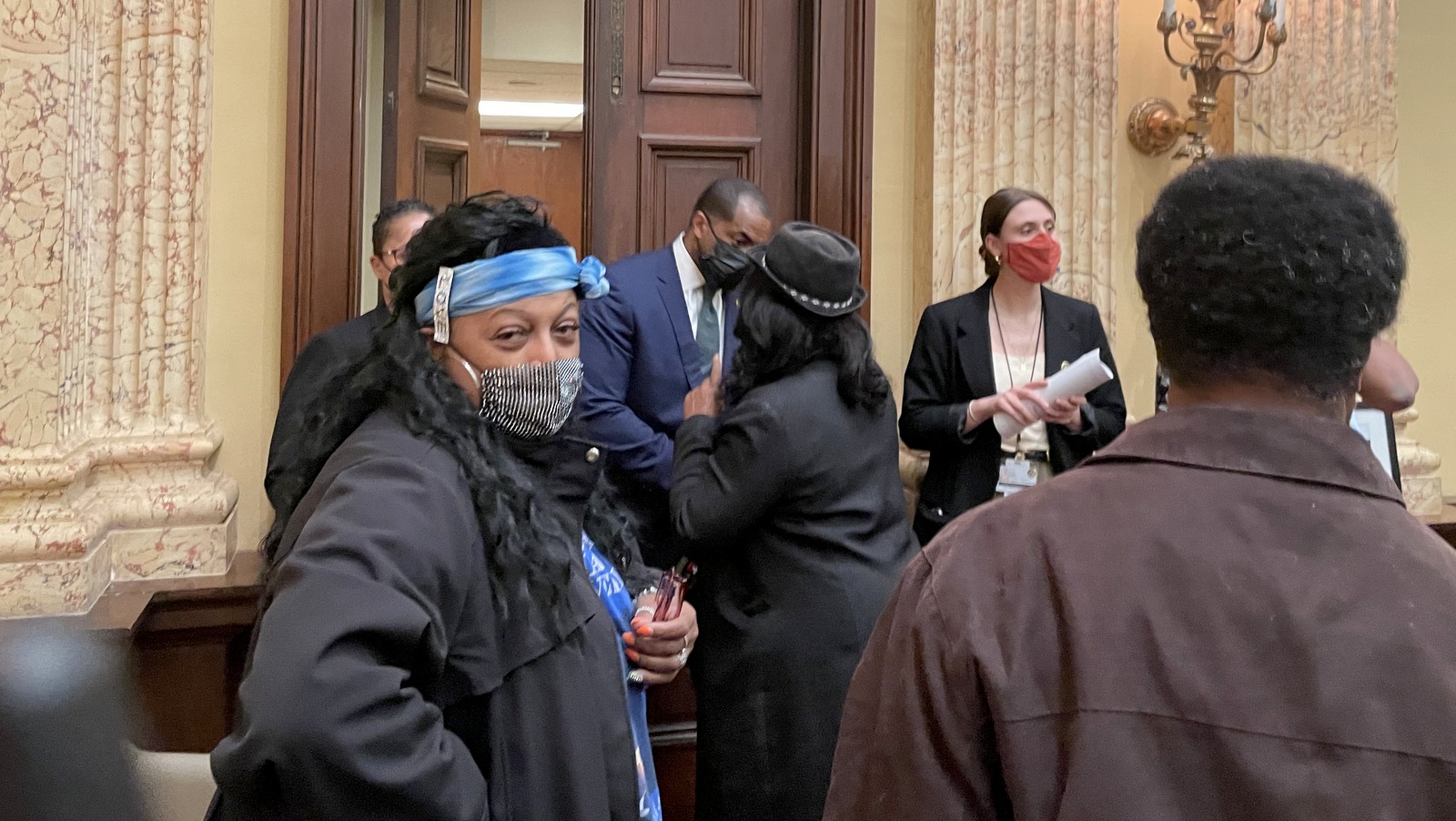 Mayor Brandon Scott, under pressure to reopen City Hall and other government buildings closed because of the pandemic, had announced last month that he planned to reopen the buildings.

• Baltimore City Council meetings to be in-person next month, but not hybrid (3/16/22)

Beginning this week, Council meetings will be held once again at City Hall at 100 Holliday Street.

Today Scott will deliver his annual State of the City address in the Council chambers and the Board of Estimates will meet in-person tomorrow.

Visitors to the building should be prepared for a temperature scan at the door and must show ID.

A staffer yesterday met a reporter at the elevator and escorted her to the chamber – not a normal practice during pre-Covid times.

Visitors are also required to wear a mask while in the building. 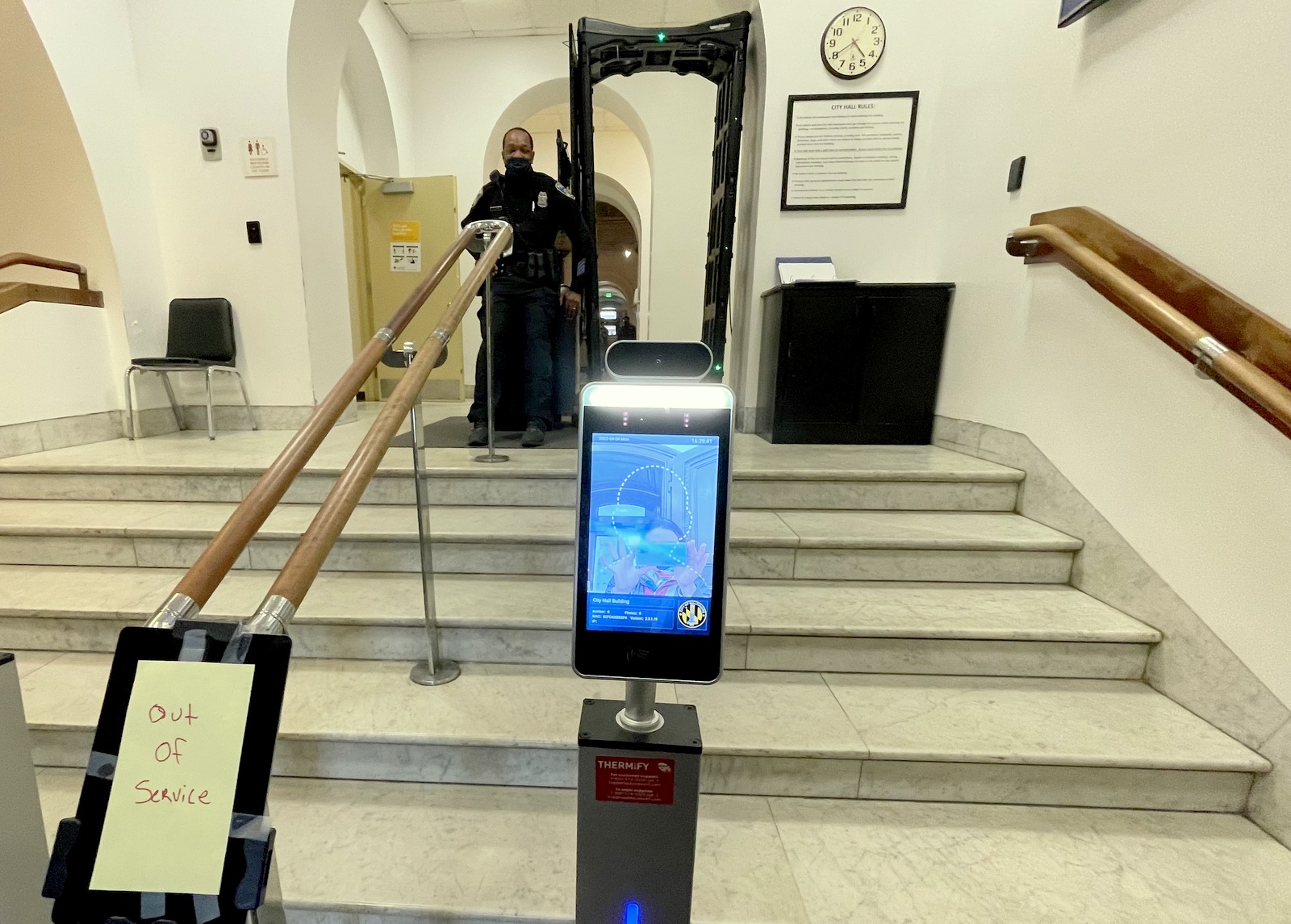 At City Hall, visitors must stand in front of the screen for a temperature scan before going through the metal detector. (Fern Shen)

Mosby said at the Council luncheon yesterday that members will be permitted to go maskless inside the building because “we know them, they are vaxed, double-vaxed, boosted and in some cases double-boosted.”

Once yesterday’s meeting got underway, it proceeded at a smart pace, with little discussion.

There were some quiet cheers from legislative staffers for a couple of bills approved for final passage.

One requires building permit holders to  submit proof of proper disposal within a certain period of time after the permit work is concluded. Another sets the goal of having city government operations achieve net-zero emissions by 2050.

New bills were introduced, including Ramos’ resolution to conduct a study that will produce a report on the effectiveness of Tax Increment (TIF) Financing for development, a practice that has drawn criticism over the years.

In one case, a bill was introduced to formalize a change that has already been made – to switch the name of the park long known as Robert E. Lee Park at 1000 Lakeside Drive to Lake Roland Park. (The signs have already been altered, Mosby noted.)

The meeting ended – as Council meetings always do these days, whether virtual or in-person – on a somber note.

Vice President Sharon Green Middleton called for a moment of silence for those who died as a result of the opioid epidemic, the Covid-19 pandemic and “the 81 victims of homicide so far this year.”