State’s Attorney Marilyn Mosby – who has not formally declared her candidacy but has been raising money, rallying supporters and stockpiling lawn signs – brought her message to Roland Park last night.

Before the monthly meeting, some members tried to talk Claudia Diamond, president of the Roland Park Civic League, out of letting the city’s indicted top prosecutor come.

Others, at the meeting, questioned why other candidates in the race had not been invited.

That discussion ended when Mosby swept into the church basement room, equipped with a binder full of talking points.

“We hear about the rapes, the robberies, the non-fatal shootings every single day, but we don’t often hear about the outcomes of those cases because what is perpetuated by the media is negativity.”

She went on to recite the details of several recent convictions, the philosophy behind her policies, her office’s heavy caseload and other challenges.

The audience of about 35 people listened politely, but several had issues they wanted to raise.

Tony Foreman, who owns several restaurants including Petit Louis Bistro on Roland Avenue, said he was concerned about safety.

“I’ve watched the attitudes change greatly toward coming into the city for those businesses and toward purchasing a home in the city and participating in the tax base,” he said. “And when I think about when that change started, it coincides really clearly with the beginning of you being in office.”

While some of the policies she has put in place may be “thoughtful,” Foreman said, “I struggle seeing the general effectiveness of those policies. I’d like to know what you have to say about that.”

“That’s not what I said”

There’s a “false correlation,” Mosby replied, that her policies “are responsible for the sentiments of the current day.”

She noted that since she became state’s attorney in 2015, Baltimore experienced the Uprising following the death of Freddie Gray, a U.S. Department of Justice report on “the discriminatory practices of the eighth largest department in the country,” and the federal Gun Trace Task Force prosecution, “one of the largest police corruption scandals in the history of the country.”

“And furthermore,” she continued, she was hampered by the instability of “having to work with five police commissioners and four mayors in six years.”

After she concluded that “there are a whole lot of other collateral issues,” Foreman said, “I know about those other issues. You are the one in charge.”

Later in the evening, Foreman again raised the issue of responsibility:

“You are the top law enforcement official in the city, correct?”

“One of them, correct,” she said, pointing to the police commissioner and the mayor.

“Who is over you?” Foreman pressed.

“There’s no one over me. I represent the citizens of Baltimore,” Mosby said.

“There’s no one over me. I represent the city of Baltimore”  – Marilyn Mosby.

“So, if you are the top, then – and looking at the change over the last seven years – you’re essentially saying it’s not your responsibility,” he continued.

“That’s not what I said at all,” she answered.

“You’re accepting no responsibility!” he cut in.

“You clearly didn’t listen to what I said,” she shot back.

At this point, League President Diamond, who was moderating, cut the conversation off.

“Then try the case”

Mosby’s appearance came two days after a judge pushed back the trial date for her federal indictment. Now her jury trial is scheduled to take place on Sept. 19 – meaning, after the July 19 Democratic primary.

The two-term incumbent is charged with two counts of perjury and two counts of making false statements on loan applications for two Florida vacation properties.

He referenced the allegation that she lied about Covid-19 hardship in order to withdraw money early from her pension fund without a financial penalty.

“I’m concerned right now, given the optics of your situation, how any person in Baltimore can feel comfortable with the state’s attorney who spends time in Florida, flaunting an annual salary of $250,000,” Dolina said. “And then decides to do what many people in our city can’t do: Take money out of their pension fund so they can flip houses and make a profit.”

“And if you want to talk about your innocence, then try the case! Why did you add instability to this primary run by postponing this case when you said [previously] you want to be tried right away? You are creating disrespect in the legal community. Your prosecutors are overworked. Because they don’t want to work for you.”

Facing his image on the Zoom screen, Mosby answered:

“I have nothing to be apologetic about in utilizing my own money”  – Marilyn Mosby.

Repeating the allegation that her lawyers have made in court filings – that she is “racially and politically and personally being attacked” by prosecutors – she fired back about the pension withdrawal charges, saying, “I have nothing to be apologetic about in utilizing my own money.”

“It’s not your money – it’s the taxpayers’ money!” Dolina exclaimed.

“It is my money!” she insisted. “I am here to talk about the work. And I’m not going to allow you or anyone else to distract me. Next question.” 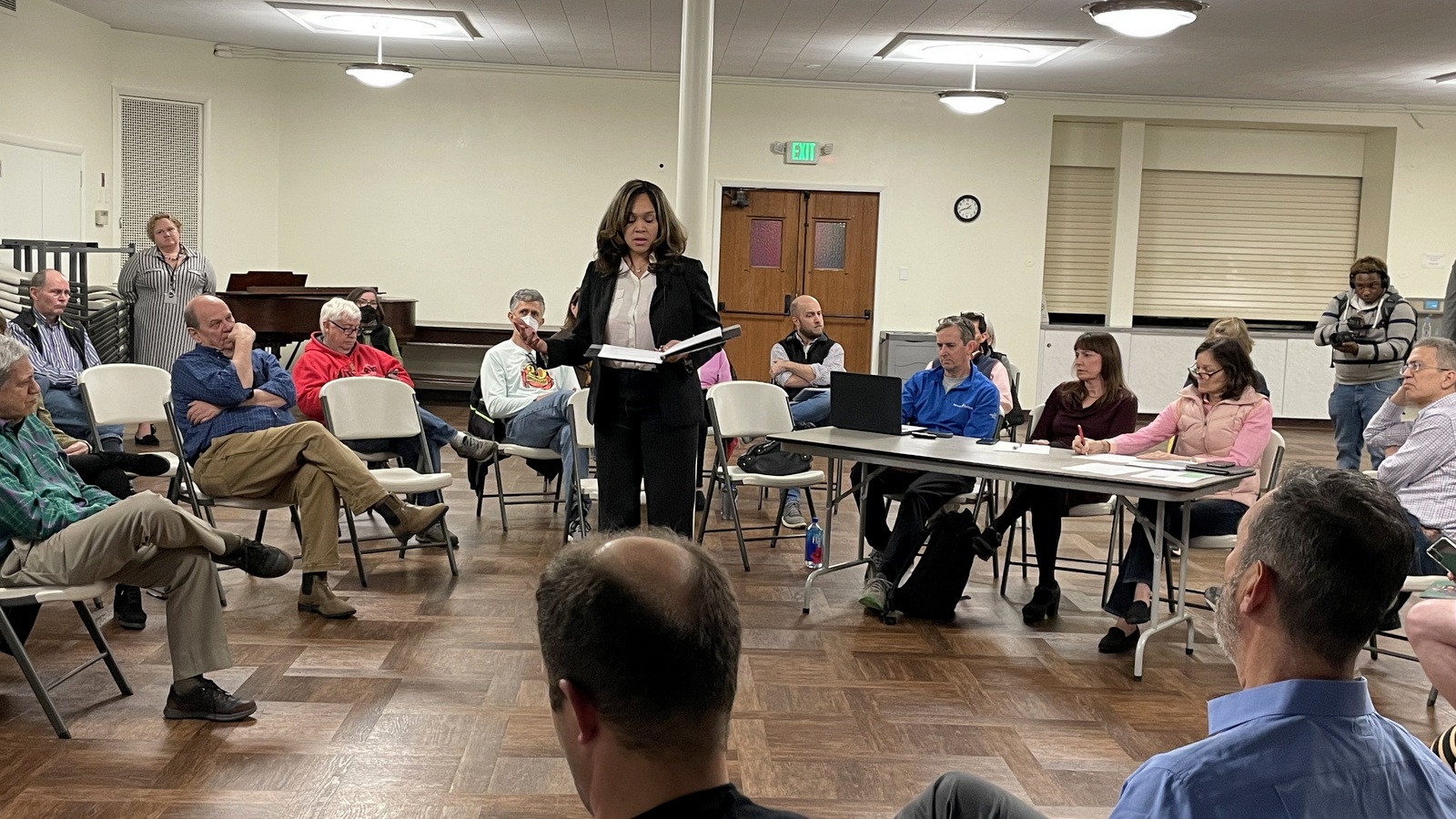 One Civic League officer, Bobby Marinelli, said afterwards that Mosby’s appearance was “a bad idea,” and that “the optics of the residents challenging her is likely to be seen as a racial issue.”

Mosby spoke passionately to the audience, all of whom were white, about “the racial inequities that permeate the criminal justice system” and that hurt “poor Black and brown people.”

“If you’re a Black person in this country, you’re four times more likely to be arrested for marijuana possession than a white person,” she said. In Baltimore, the likelihood jumps to six times.

“We need to address our history of racism. That meeting will only serve to reinforce the perception of Roland Park as ‘whites only’”  – Bobby Marinelli.

Several Civic League members fretted privately that legitimate questions about Mosby’s policies and personal legal troubles would be be disparaged, coming from an affluent neighborhood – one still working to move beyond its ugly early history of property covenants that excluded Blacks and Jews.

“We need to address our history of racism,” Marinelli said. “That meeting will only serve to reinforce the perception of Roland Park as a ‘whites only’ neighborhood. I am so bummed by this.”

Diamond was asked, at one point, why the other primary candidates – Ivan Bates and Thiru Vignarajah – were not invited.

“Our agendas are really full with a lot of community business. I just thought that we should not necessarily use our monthly meetings for campaign stops,” she said.

Mosby had been scheduled to appear at the Civic League’s March meeting, but the organization then announced that she had canceled because her office’s annual report wasn’t ready.

Diamond said she had tried to organize a public forum for Mosby and Bates at the Bolton Street Synagogue.

Bates was willing to attend, but Mosby was not interested, according to Diamond. (At that point, Vignarajah had not entered the race.) 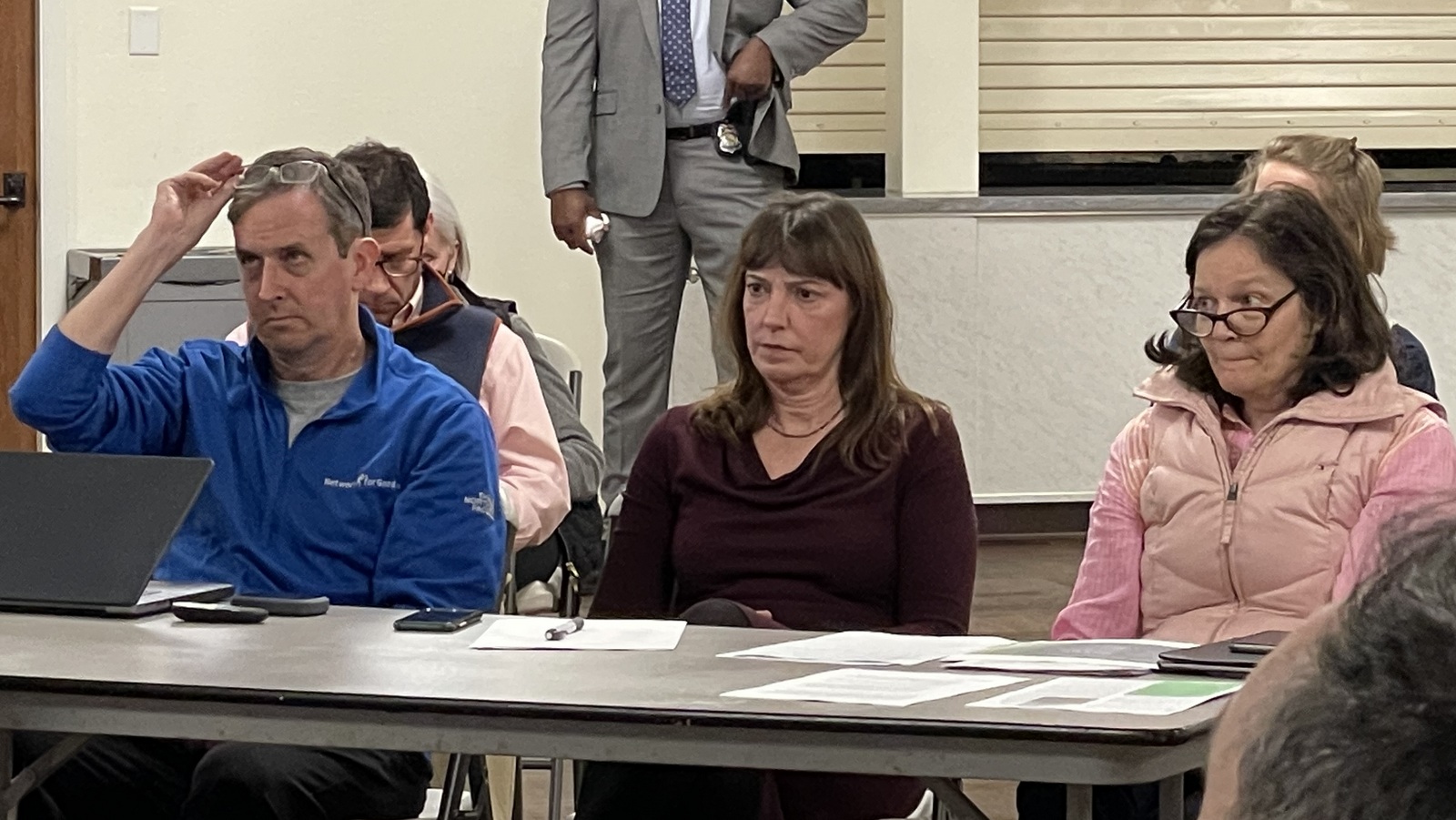 “Remember, guys,” the Civic League president added, “Ms. Mosby has not actually filed to run at this point.”

That explanation brought an eye roll from Foreman.

“I was at a meeting with the candidate earlier in the week and she assured everyone that she was running again,” he said. “So this is a campaign stop.”

An assistant dean at the University of Baltimore Law School, Diamond also made a point of describing Mosby’s ties to the community and to her professional life.

“I just want to acknowledge that your daughters go to Roland Park Elementary and Middle School. My daughter did as well,” she said.

“You and I have connections through UB Law School. I’ve been involved with the state prosecutors program, and I also have many alums that I taught who work in your office.  So I really appreciate you coming and talking tonight about the office and your activities and the annual report.”