Illegal sewage releases from Baltimore’s Patapsco Wastewater Treatment Plant are worsening, a new inspection report shows – and not only in ways that threaten the environment.

Dangerous chemicals that pose a safety threat to workers are turning up in the facility’s backed-up sewage sludge, says the onsite contractor hired to remove it, Middle River-based Synagro, Inc.

The company reports that “diesel range organics, gasoline range organics and acetone have . . . been detected in the sludge,” in addition to high hydrocarbon concentrations, according to the inspection report by the Maryland Department of the Environment (MDE).

“There is a fire hazard and the potential for an explosion associated with the levels of hydrocarbons detected in the sludge if the sludge is processed through their dryer,” the MDE report explains.

The dangerous sludge issue is one of the many problems identified in the report, contributing to calls for MDE to do as it has with Baltimore’s failing Back River Wastewater Treatment Plant:

Take it temporarily away from city management and place it under state control.

“There is a fire hazard and the potential for an explosion associated with the levels of hydrocarbons detected”  – MDE May 2022 report on the Patapsco WWTP.

The Patapsco facility’s worker safety concerns appear to be unique, but they contribute to systemic failures and Clean Water Act violations that mirror those documented at Back River.

The state inspection report explains that Synagro will no longer use a more efficient method of removal, pelletizing the sludge, but is relying on a slower technique, processing the solids to cake.

The result is that solids are backing up at an alarming rate at the facility, said Angela Haren, senior attorney at Chesapeake Legal Alliance.

“Significant amounts of solids are accumulating and gumming up the works and not being disposed of properly,” Haren said, noting that the material is not only unsafe, but that failures in one part of the treatment system have a cascading effect on other parts.

The MDE report offers no explanation for the changing composition of the solids. Haren noted that the Patapsco plant, located in Curtis Bay, serves more industrial customers than Back River.

“Whatever’s going on there, the city needs to act quickly,” she said. “But we don’t see the urgency.” 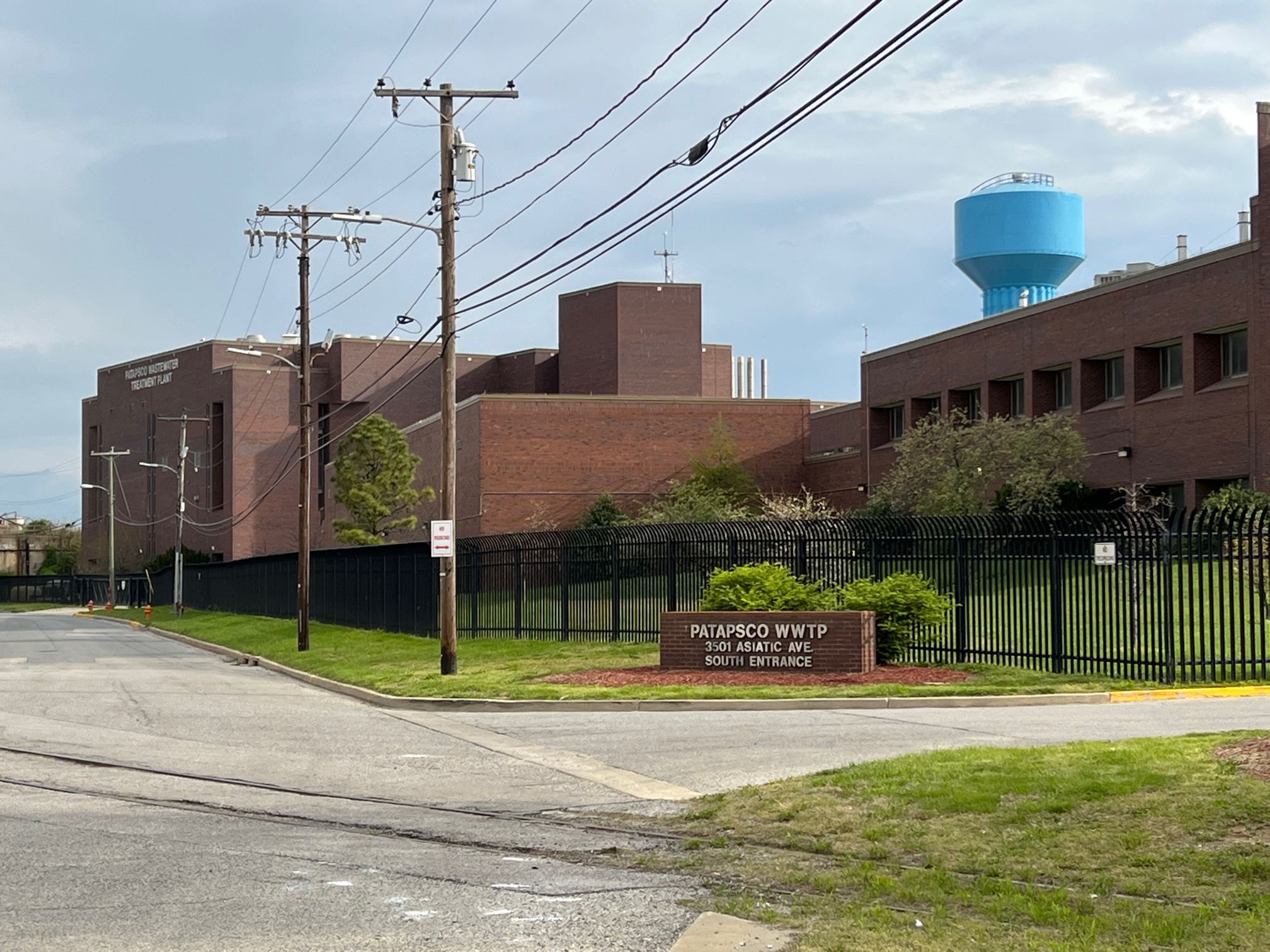 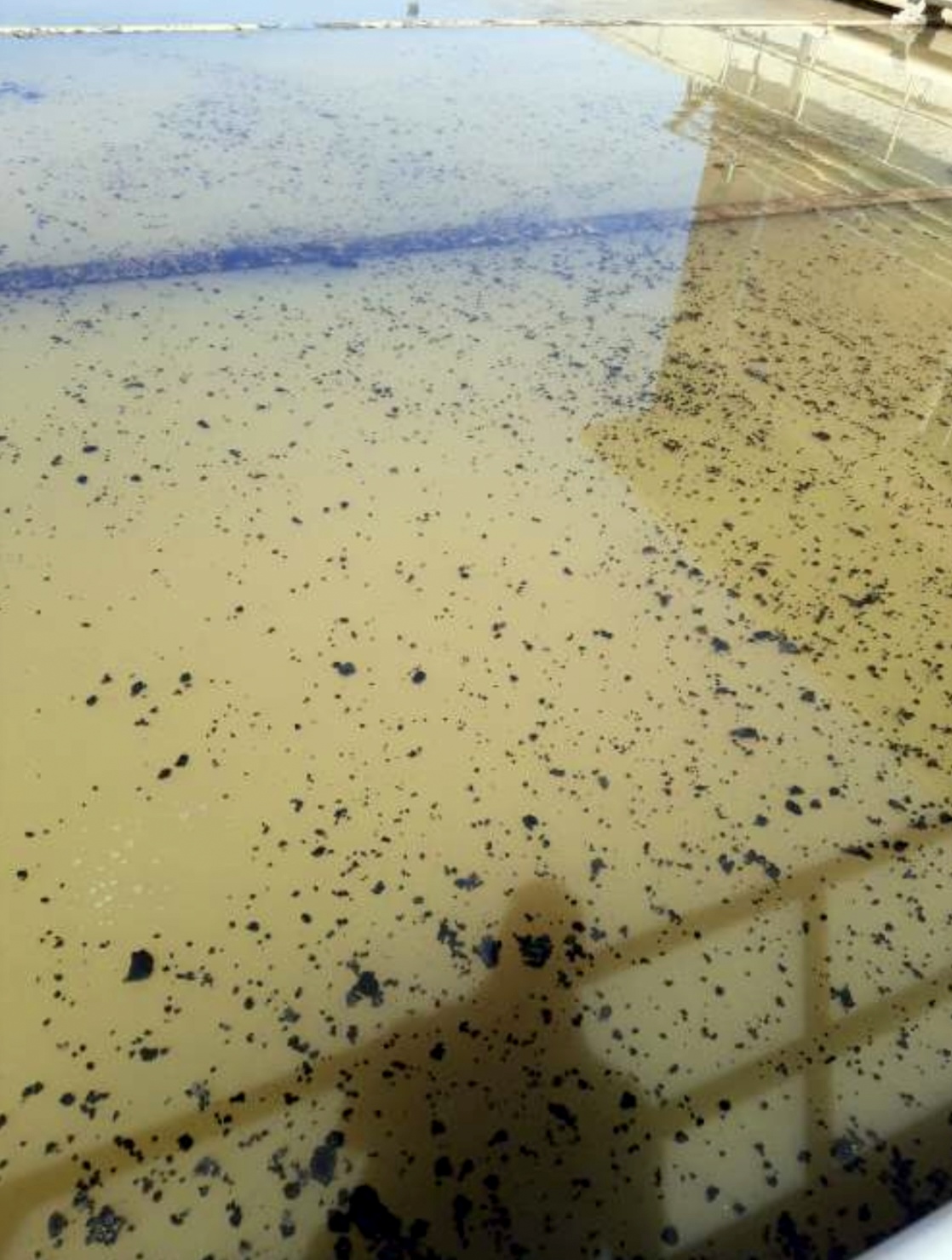 Her warning came after MDE released a 38-page report yesterday showing that the plant has continued to fail to properly treat and dispose of human waste and, as a consequence, is releasing tons of illegal pollutants into the Patapsco River and Chesapeake Bay.

Citing similar concerns, MDE removed from the Back River plant from city control in April and placed it in the hands of the semi-public Maryland Environmental Service. (For background: here and here.)

The Chesapeake Legal Alliance and Blue Water Baltimore want the state to take the same action with Patapsco, temporarily removing it from the management of the Baltimore Department of Public Works.

The groups also said they will ask a federal judge to issue a temporary injunction compelling Baltimore, which owns both plants, to address the problems at Patapsco. The groups have filed a federal lawsuit against the city over alleged mismanagement of the plants that they say constitutes violation the federal Clean Water Act. 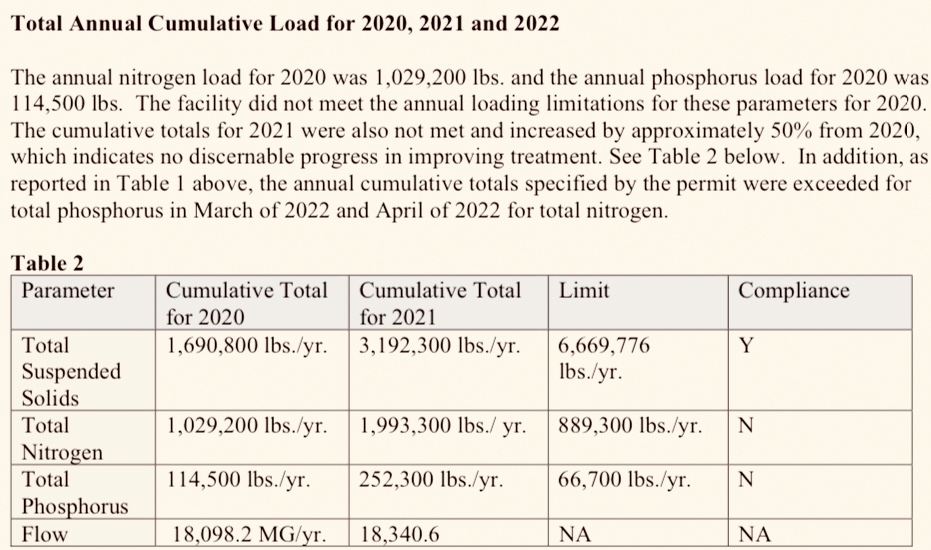 REVERSE PROGRESS: Nutrients released last year from the Patapsco treatment plant were  50% above the releases in 2020. (May 2022 inspection report, MDE)

Alice Volpitta, Baltimore Harbor Waterkeeper at Blue Water Baltimore, said she was shocked by the Patapsco inspection report, especially its finding that the plant’s nitrogen filters “are being completely bypassed in the treatment process.”

“The system is so clogged with sludge and bio-solids that it has been rendered totally dysfunctional,” she said.

Nitrogen and other nutrients released into the Bay and other waterways cause algae blooms that result in low-oxygen “dead zones” that are toxic to wildlife.

“For a short time in 2020, the city was meeting these goals. Then it all went downhill”  – Angela Haren.

In 2021, the Patapsco plant discharged more than a million pounds of nitrogen over its permitted legal limit, according to the MDE report. In the first 4½ months of 2022, the facility has already exceeded its total limit for the year, the report indicates.

Haren noted that more than $1 billion in state taxpayer funds have gone into upgrades designed to bring the Back River and Patapsco plants up to federal Enhanced Nutrient Removal (ENR) levels – levels Patapsco is now far exceeding.

Water treated to this standard should have no more than 3 milligrams per liter of nitrogen. “For a short time in 2020, the city was meeting these goals. Then it all went downhill,” Haren said.

The latest inspection found that the Patapsco facility has been releasing over 20 milligrams per liter. “When you get to 30 milligrams, that’s raw sewage,” Haren observed. 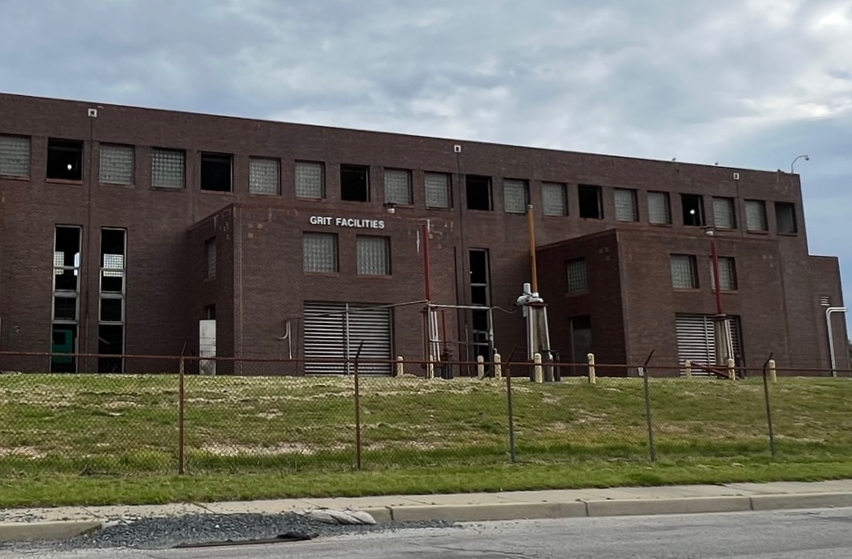 The equipment used to remove grit from sewage coming into the Patapsco plant was found clogged with rags, paper, plastics and other debris. (Mark Reutter)

The inspector’s report included a wide-ranging list of issues identified on multiple visits, including “at least 19 effluent violations” between 10/1/21 and 4/30/22.

He documented spilled sludge near storm drains, conveyor belts in the grit screening area that were inoperable due to accumulated rags, paper and plastic, and critical equipment sent out for repairs that had not been returned for service a year later.

The facility exceeded its annual allocation for PCB releases, mishandled samples it is required to collect and had ” no plan going forward on how to effectively manage biosolids in order to bring the Patapsco WWTP into compliance with the permit,” the inspector wrote.

“If Synagro is not able to process the solids, the Patapsco WWTP has no backup plan,” he continued.

“Patapsco WWTP is storing the unprocessed solids at an on-site transfer station and in a secondary clarifier,” he wrote. 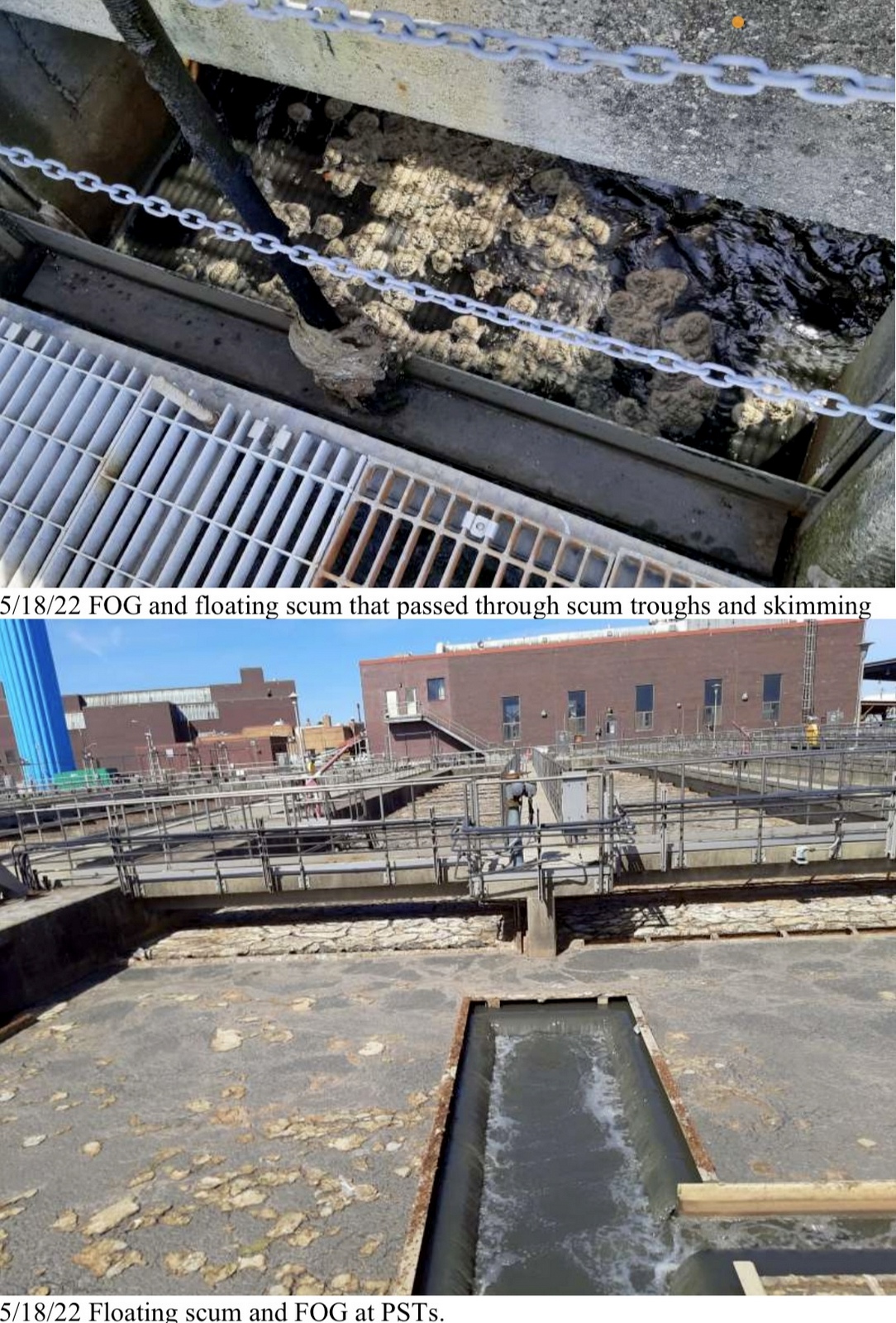 Observed at the Patapsco sewage plant on May 18, floating scum and fats, oils and grease. (Maryland Department of the Environment inspection report)

Another problem the inspector discussed at length was scum and Fats Oil and Grease (FOG) solidifying in some parts of the works, potentially causing pipes to clog and “impeding downstream treatment processes.”

The report ordered DPW to correct the violations, including the spiking FOG problem.

“The causes of the excessive amounts of FOG entering the treatment works should be investigated and corrected by evaluating significant industrial users and source tracking activities,” the report said.

“We are fully aware of the concerns at the Patapsco Treatment Plant. We have been addressing these concerns for the last five months. Employee safety is paramount and we will continue to take actions that ensure our employees’ safety. The hydrocarbons’ concern is being misconstrued. Sludge is not being heated. We are trucking the sludge off the plant until we find the source of the issue. We will continue to keep our employees and our regulators informed regarding these concerns.” 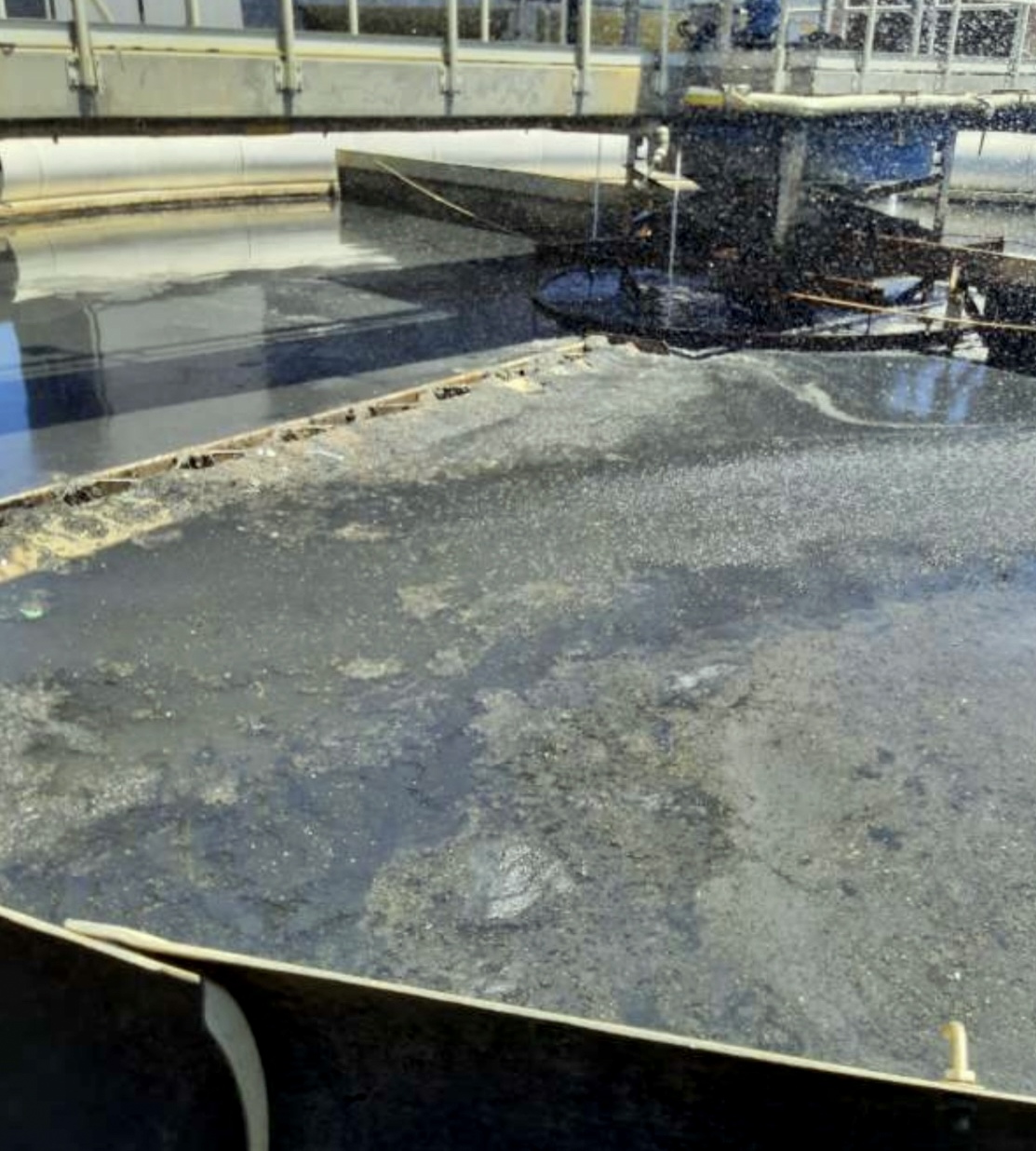 Gravity sludge thickeners, a step in the sewage treatment process “are receiving more sludge than they can process,” the May 2022 MDE inspection report on the Patapsco WWTP says.

• To reach a reporter: fern.shen@baltimore.brew