Consider the mixed messages coming out of City Hall about what matters most to Baltimore’s movers and shakers: real estate and money.

The Bureau of the Budget and Management Research (BBMR) released a report last week saying the city should cap and even curtail overly generous tax breaks for developers.

At the same time, Mayor Brandon Scott and the City Council under President Nick Mosby are expanding and lengthening the life of three of the biggest subsidies.

Adding to the policy disconnect, both the budget office and the politicians evoke “equity” and “sustainability” as their guiding principles for either shrinking or boosting the giveaway programs.

Left unchanged and unchecked, tax rebates to real estate investors and developers will gobble up 9% of the city’s gross property tax revenues by 2031.

That estimate was made before the City Council expanded the geographic scope of the Enterprise Zone tax credit and reauthorized rebates for upscale apartment construction and historic property renovation.

What is the mayor’s rationale for supporting ballooning rebate programs for wealthy investors – an issue that has sparked community protests over the years and now includes concerns voiced by the city’s own budget director, Bob Cenname?

Mosby voiced his support for re-authorization by proclaiming that the tax breaks will “bring sustainable solutions that bolster smart and equitable development.”

Photos of developer Warren E. Halle, whose company picked up $1,149,000 in tax rebates for 10 Light Street in 2020, are scarce, but photos of his luxury yacht are widely available. (hallecompanies.com)

A tangle of programs, most of them administered by the secretive Baltimore Development Corporation (BDC), governs how tax credits are parceled out to prominent developers like Mark Sapperstein, the Bozzuto Group, Scott Plank, Beatty Development, Bill Struever, and the Paterakis and Gorn families.

You may have heard of the Enterprise Zone program. But are you aware of High Performance Market Rate Rental Tax Credits that returned $20.1 million in rebates this year for those investing in high-end apartment construction?

Or Brownfields tax credits that, offering 50% tax savings for five years, can easily be jigsawed into Enterprise Zone “Focus Areas” to yield 70% tax forgiveness across a full decade? 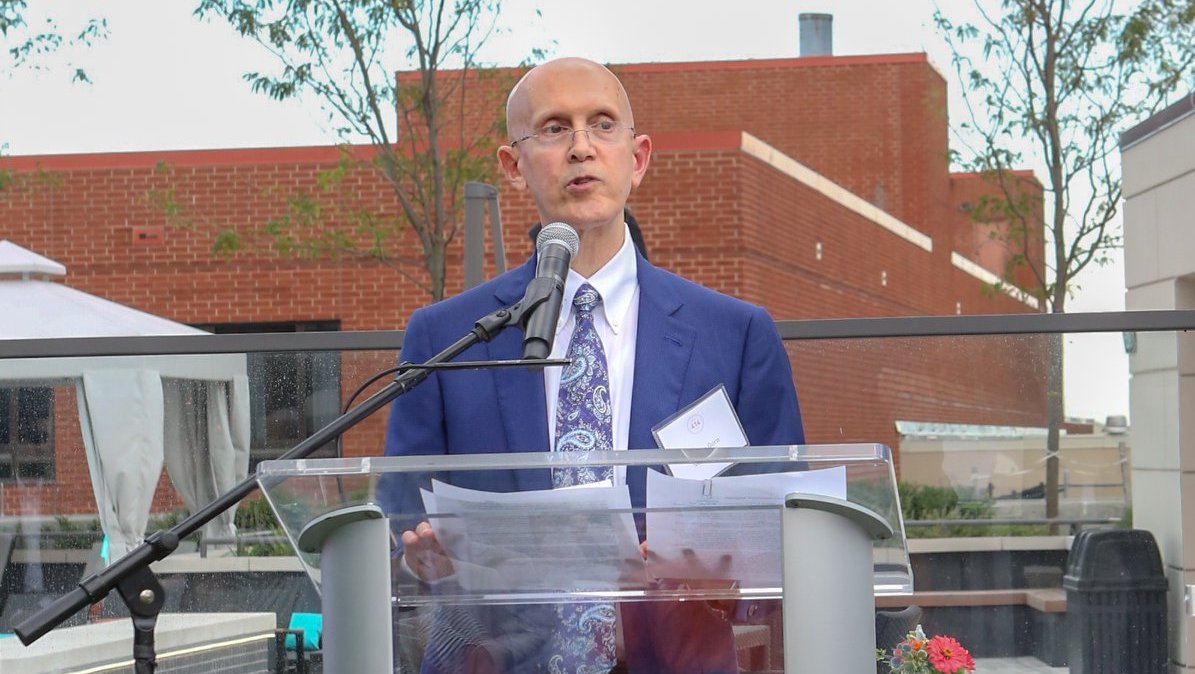 Developer Stephen Gorn at the 2018 “Grand Opening Party” for 414 Light Street (SHOWN BELOW), whose penthouse units reportedly go for about $8,000 a month. (Facebook) 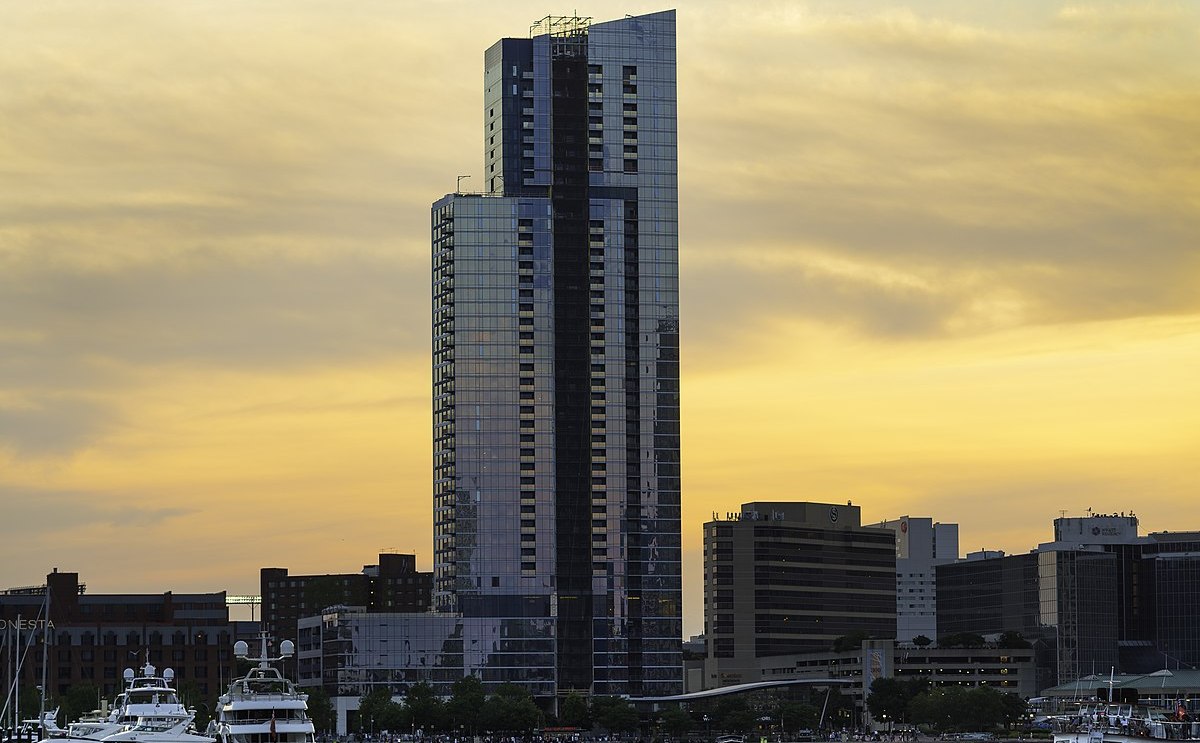 These programs are a relatively recent phenomenon. The Brownfields program was authorized by the state and introduced into the city in 1998, while handing out rebates to builders of upscale “high performance” apartments wasn’t on the political agenda until 2013.

(Interestingly, developers rarely cite the above justifications. They simply say that with the city’s property tax rate so much higher than surrounding counties, tax rebates make their bottom lines work.)

Collectively, the giveback programs are consuming more and more of Baltimore’s tax revenue stream, according to BBMR.

In 2013, for example, credits from the EZ, High Performance Rental and Brownfields programs cost the city $8.3 million in lost property tax revenues.

No other Maryland jurisdiction wipes away developer tax dollars like Baltimore does.

While intimate ties between real estate interests and local governments are a way of life across the state – witness Howard Perlow’s annual Maryland Party in Las Vegas – no jurisdiction wipes away developer tax dollars the way Baltimore does.

”Our analysis shows that the city spends far more on total tax credits and development tax credits compared to other larger Maryland counties,” the report notes.

Baltimore County, for example, awarded $13 million in developer tax credits in 2019, or 1.3% of its total property tax revenues, the report found.

Prince George’s and Montgomery counties each shaved off only 0.7% of their gross property tax revenues in developer rebates, while Anne Arundel County essentially demanded full tax payments from builders, awarding just $1 million in credits in 2019.

“A logical conclusion is that development would have taken place anyway, and someone came up with a tax credit”  – Councilwoman Odette Ramos.

While it’s long been argued that such credits are essential for Baltimore to attract private investment, the BBMR concludes that at least two programs – the Brownfields and Historic tax credits – are “far more generous than is required to spur development.”

What’s more,“the unique way” that the programs are set up means that the city gets “no new tax revenues for five years on Brownfield projects and for 10 years on Historic projects,” the BBMR noted.

(In the case of Brownfields, the city diverts 30% of the added property taxes to the State Brownfield Fund while simultaneously awarding 70% to the owner.)

“A logical conclusion is that development would have taken place anyway, and someone came up with a tax credit,” Councilwoman Odette Ramos told The Brew. 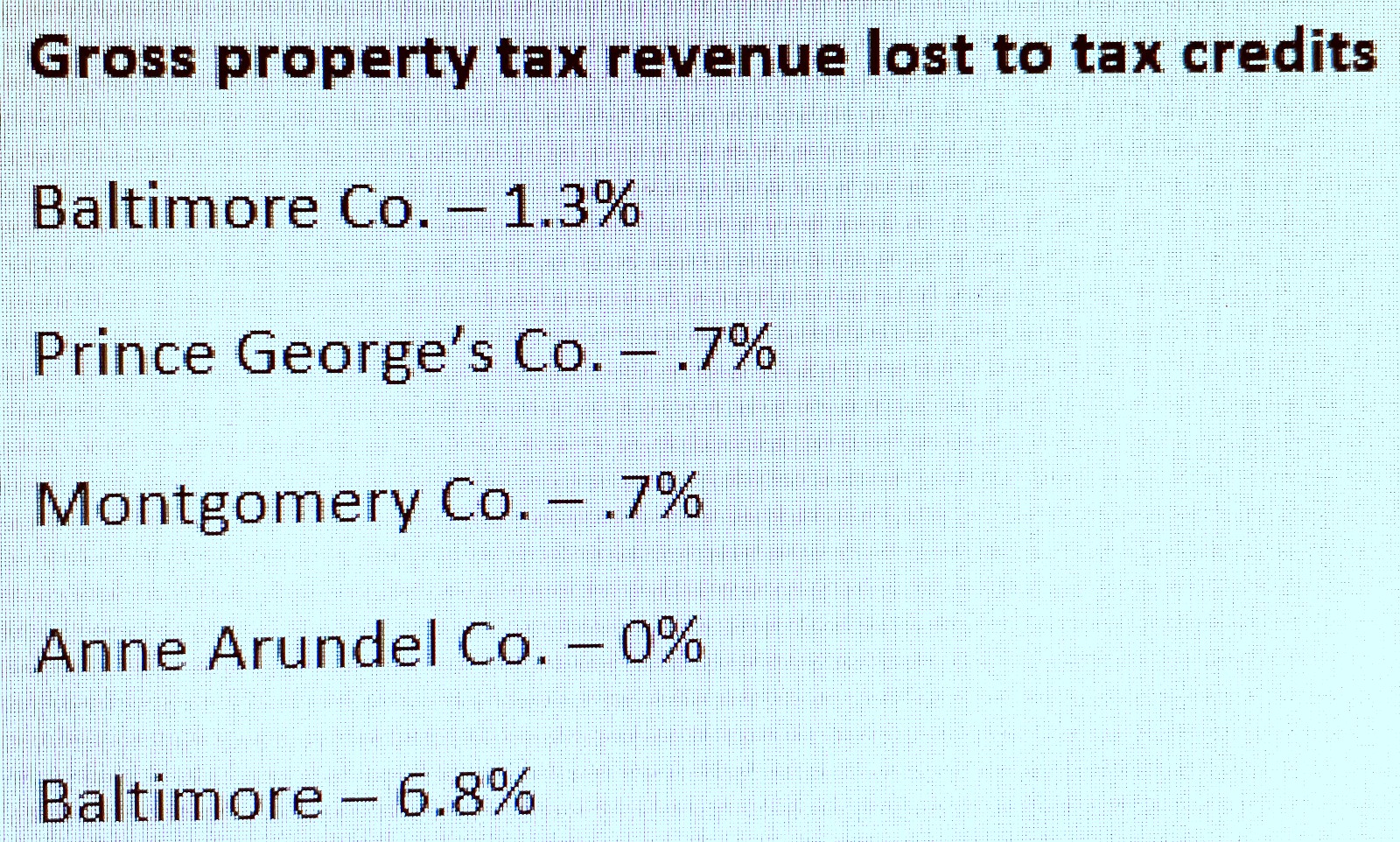 From “A Comprehensive Review of the City’s Current Tax Credit Programs,” BBMR, August 2022.

Missing from Report: PILOTs and TIFs

Significantly, the report only analyzes direct tax reimbursements given to developers.

The PILOT program, for example, resulted in the payment of $1 a year for 25 years on the 752-room Marriott Waterfront Hotel at Harbor East.

The deal, signed by former Mayor Kurt Schmoke in 1997, saved the hotel’s owners (the Paterakis family) $61.5 million in property taxes, The Brew reported based on BDC records.

So far, Plank, the founder of Under Armour, and Goldman Sachs, his Wall Street partner, have utilized $137.5 million in TIF bonds, which are to be repaid over 30 years.

To do that, nearly $300 million in future property taxes – assessed on the value of new office and apartment buildings at the site – will be diverted from the city treasury to bondholders to pay off the interest and principal through 2050.

If the bondholders aren’t paid, taxpayers are not legally responsible for the shortfall. But in the past, Baltimore City has paid TIF bondholders the money owed on troubled projects to avoid default. 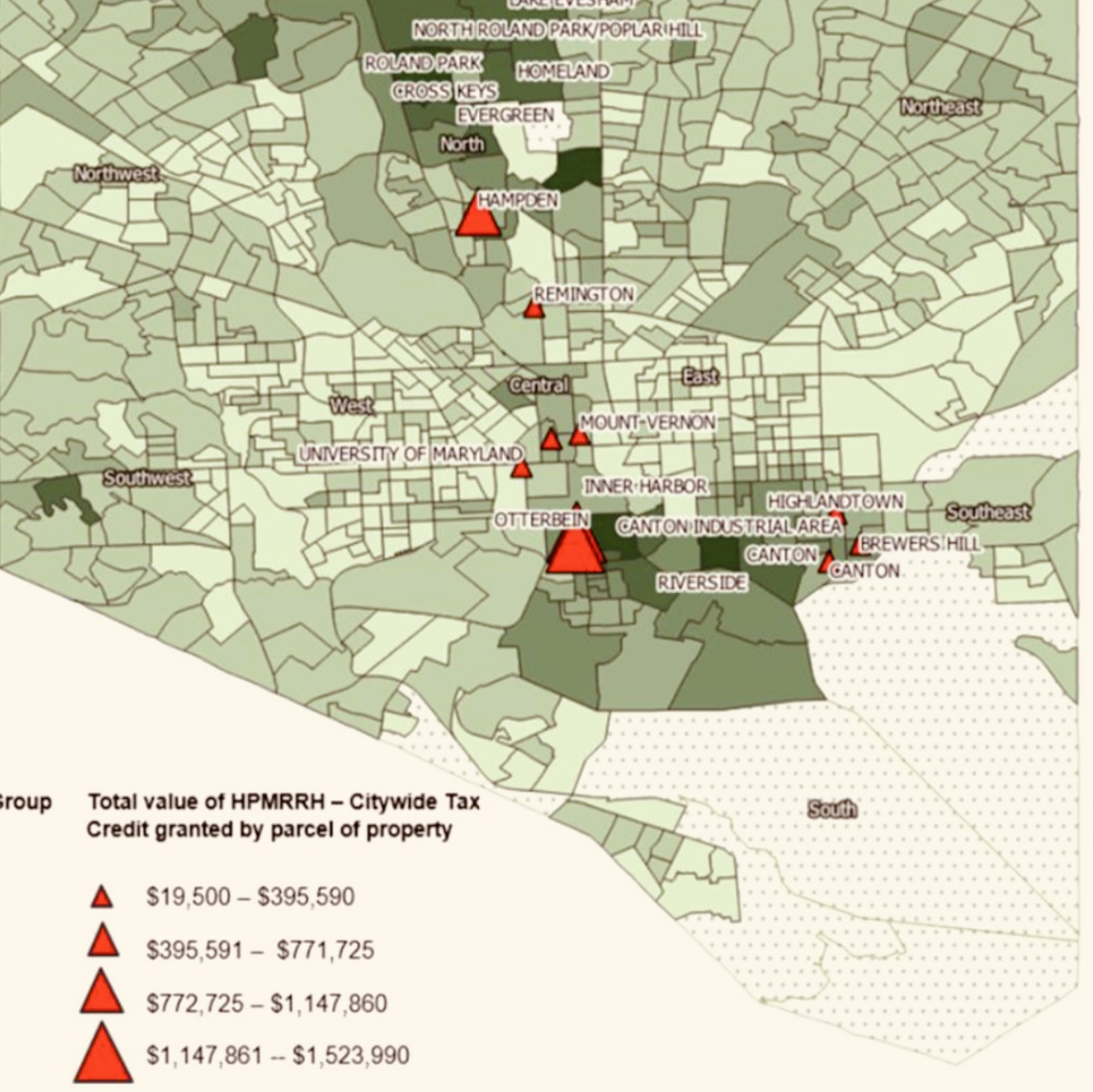 The red triangles show the location of tax credits granted to developers of “high performance” apartments whose rents are far above the means of average city residents. (BBMR report)

A New Type of Redlining?

A decade’s worth of data showed that nearly all new construction supported by EZ and other credits was located in predominantly white neighborhoods.

The greatest beneficiaries were clustered around the harbor – Canton, Fells Point, the Inner Harbor/Otterbein, Riverside and Locust Point – with some “uptown” spill-off in Mount Vernon, Station North and Charles Village.

”The city’s tax credits favor the stronger and more established neighborhoods,” the report says, carefully avoiding the racial implications of its findings.

Those familiar with the research of Professor Lawrence T. Brown well know the alignment fits snugly into the “White L” that splits the “Black Butterfly” of East and West Baltimore.

Forced segregation by city ordinance a century ago, followed by “redlining” in federal housing loans, pretty much eliminated private investment in the “butterfly” other than rental conversions left behind when white homeowners headed for the suburbs.

Tax credits awarded  by the city to private investors, so went the theory, would reverse that process and bring capital back to long-neglected neighborhoods.

65% of upscale apartment credits were awarded to downtown or Inner Harbor projects. None went to a Black neighborhood.

It certainly hasn’t worked out that way. Take the High Performance rental credit, which applies to market-rate housing out of reach to lower-income families.

Rebates to developers closely tracked neighborhoods where housing demand has been strong over the last decade.

Fifteen of the 23 credits (65%) went to downtown or Inner Harbor projects. Of the remaining eight, two were located in Mount Vernon, one in Station North, one in Remington, one in Hampden (West Cold Spring Lane), one in Highlandtown, one in Canton and one in Brewers Hill. None was situated in a Black neighborhood.

The glass-encased high rise at 414 Light Street, owned by the Gorn family’s Questar Properties, got a whopping $3.2 million property tax credit in 2020 alone, the report says. Penthouse units were to rent for about $8,000 a month, the company told the Baltimore Business Journal.

The former Maryland National Bank tower at 10 Light Street, converted to 420 high-end apartments, picked up $1,149,000 in credits the same year. The credits went to The Halle Company, whose owner, Warren E. Halle, sold the building in 2021.

Tax credits are doled out to the builders of $8,000-a-month penthouses and $8 million waterfront condos.

Brownfields tax credits have been lavished on Four Seasons condo owners, who pay many millions for a waterfront unit, and on Riverside and Locust Point developments owned by Warhorse developer Scott Plank and 28 Walker’s Mark Sapperstein. 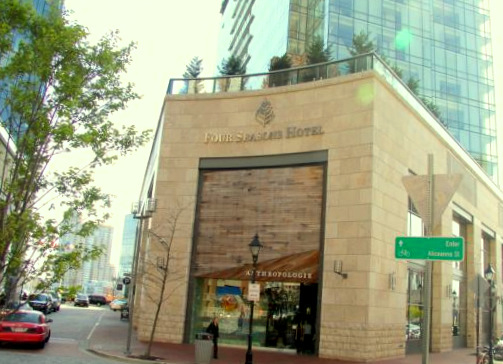 Not a single investor applied for credits in a predominantly Black neighborhood, a fact that underscores the practical problems of trying to lure private capital to long-neglected communities.

Seeking to maximize returns, developers and other real estate professionals naturally seek out places with the highest market demand.

In many parts of East and West Baltimore, there is no market demand. Black families have been fleeing those districts for decades. Blocks of vacant houses and empty lots are the depressing reminders of the mass exodus.

The data suggest what’s needed to lift up the whole city is government action.

Better schools, effective  law enforcement, clean streets and modern infrastructure (just like that going to Port Covington on behalf of a billionaire) are among the prerequisites to any successful effort to bring residents, jobs and private capital back to Baltimore.

In contrast, throwing money at upscale lofts and pricey condos in “stronger and more established neighborhoods” is not only socially inequitable, but fiscally unsustainable.

That’s the key take-away of the BBMR report, which unfortunately lacks a “Next Steps” chapter.

The mayor and City Council could write that next chapter, if they summon the will to act on the data now before them.