Now that the Harford Road Bridge project has been completed, motorists and pedestrians are relieved to know that a failing 1911 structure has been replaced with a broader, stronger bridge and they can traverse the valley safely.

But the new bridge has its share of oddities. For instance, there’s a southbound bus-only lane that’s unmatched by any northbound equivalent.

Then there are the piles of boulders laid underneath the bridge. Running along Herring Run, they have turned parts of a once bucolic stream into an outtake from a Mad Max movie.

But the greatest peculiarity is the pedestrian tunnel at the south end that abruptly terminates in front of a weed-studded embankment.

“We call it the ‘underpass to nowhere’,” says a frequent Herring Park user, who asked not to be identified, pointing out that the phrase is a play on the infamous expressway built across West Baltimore dubbed the “highway to nowhere.”

Less than two months after the $25 million Harford Road Bridge opened to traffic, the tunnel has attracted confused strollers and copious amounts of graffiti, which now cover its beige walls and are fast encroaching on its smooth oval ceiling. 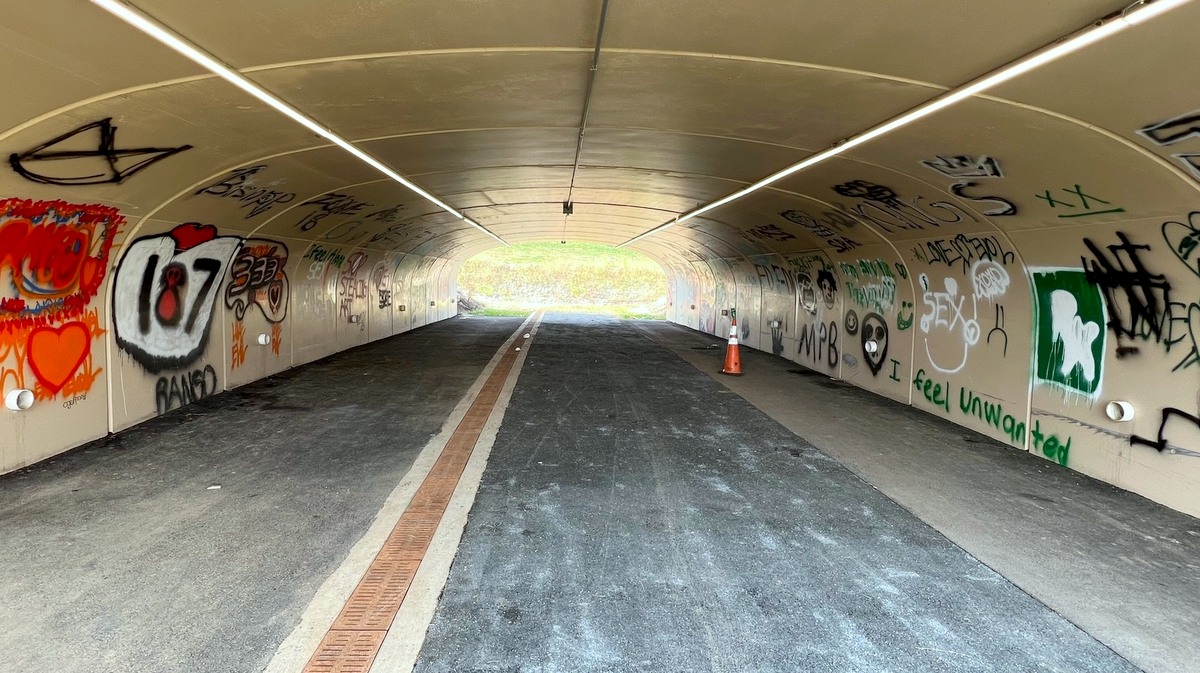 “I feel unwanted,” says one of the scrawled messages inside the wide, brightly-lit tunnel. BELOW:  The yellow dotted line shows the tunnel, “E” the land owned by DPW, and “A-B” the bridge over Herring Run. (Mark Reutter, DOT) 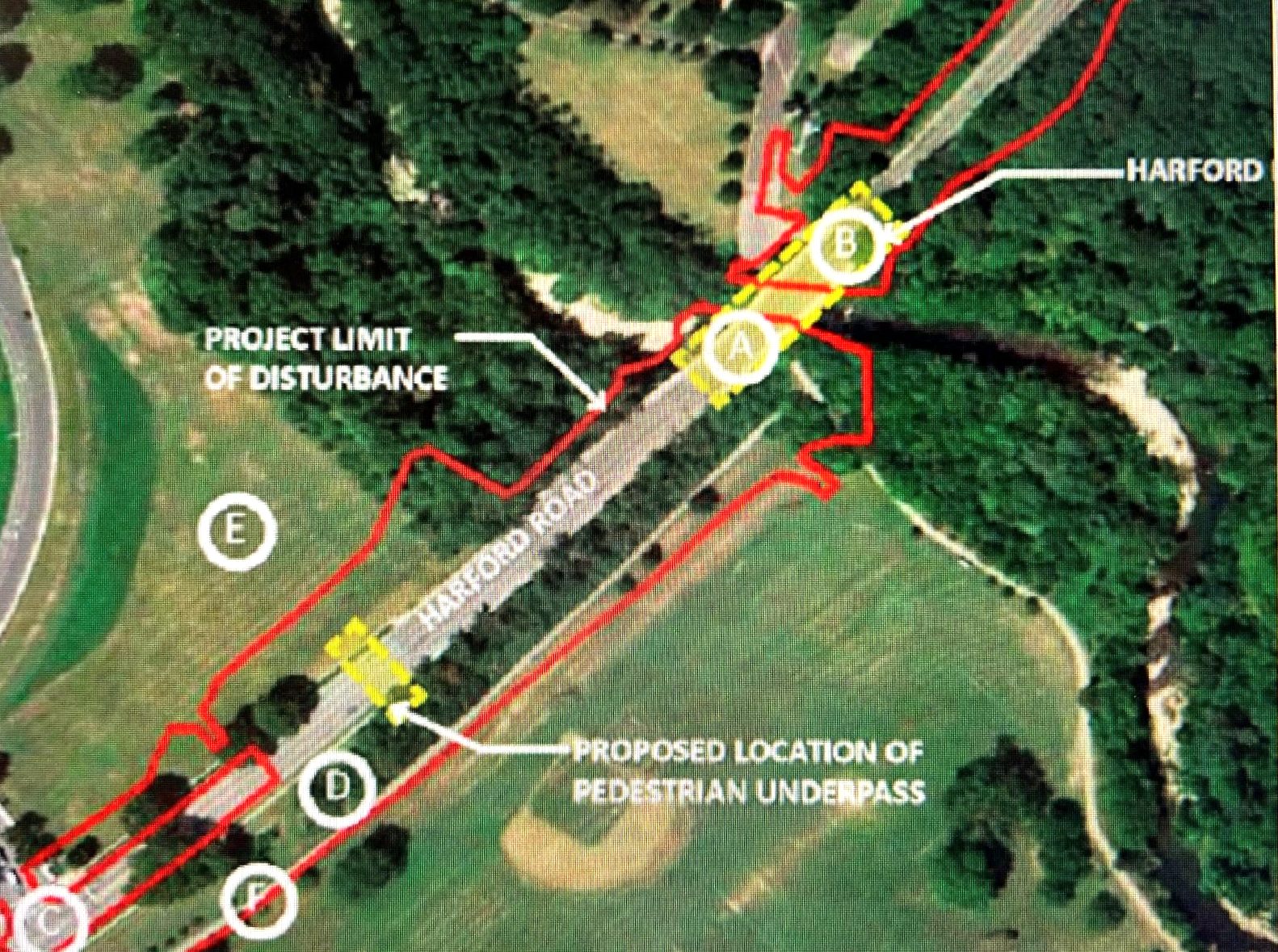 Missing in the Mix: DPW

The tunnel is the outgrowth of plans, started 20 years ago during the O’Malley administration, to connect the Father Hooper playing fields on the east side of bridge with Lake Montebello on the west.

The underpass was envisioned as a safe passageway for bicyclists, hikers and children between two popular recreation areas that would better integrate Herring Run into a broad swath of greenspace in northeast Baltimore.

Plans for the bridge were presented to the public by the departments of Transportation and Recreation and Parks in 2014, and the tunnel was part of the bridge contract awarded to Technopref Industries in 2018.

“Why in the heck would citizens think that such a large capital project would not have buy-in from all agencies involved?”

Trouble was that nobody ever got the Department of Public Works, which owns the property west of the bridge as part of its Montebello Water Filtration Plant, on board.

“I remember BCRP presented the plans for the tunnel to the Friends of Herring Run. But they never once alluded to the fact that DPW wasn’t on board,” says a former member of the group.

“Why in the heck would citizens think that such a large capital project would not have buy-in from all agencies involved? I guess we all should have been smarter and wiser than we were.” 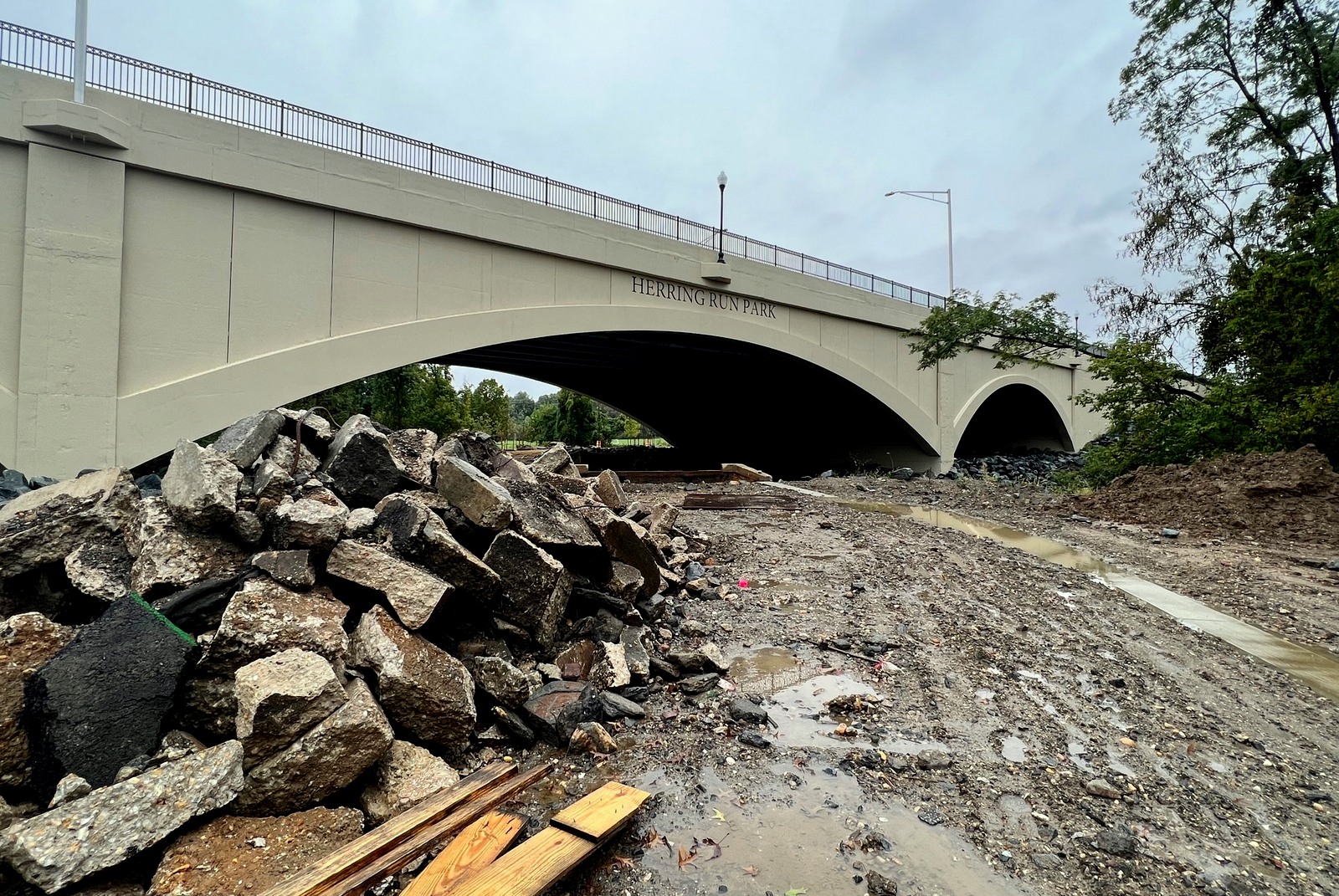 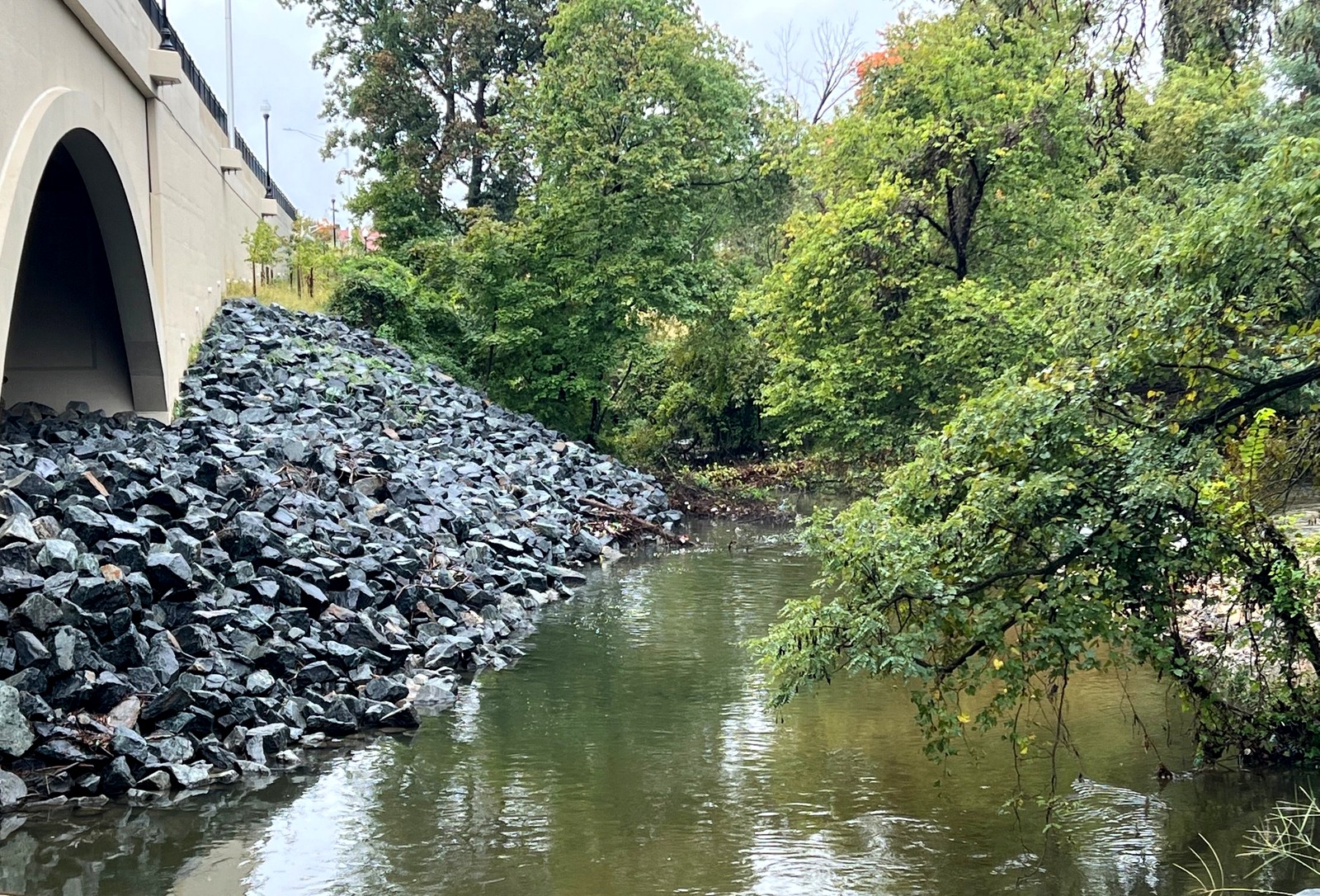 In Search of a Solution

Now confronted with a truncated tunnel, Recreation and Parks says it will try to find a solution.

“We are negotiating a design task to plan for improvements to Father Hooper Field and a pathway connection under the bridge and over to Lake Montebello,” explains Whitney Clemmons Brown, public relations officer for Rec and Parks.

But there are hurdles to overcome, she says.

DOT, meanwhile, has washed its hands of the errant underpass, saying it was just responsible for bridge construction.

Once Technopref finished putting some decorative rocks and other landscaping around the tunnel openings, DOT’s work was considered done. “Rec and Parks will review future park design and planning,” said spokesperson Marly Cardona-Moz. 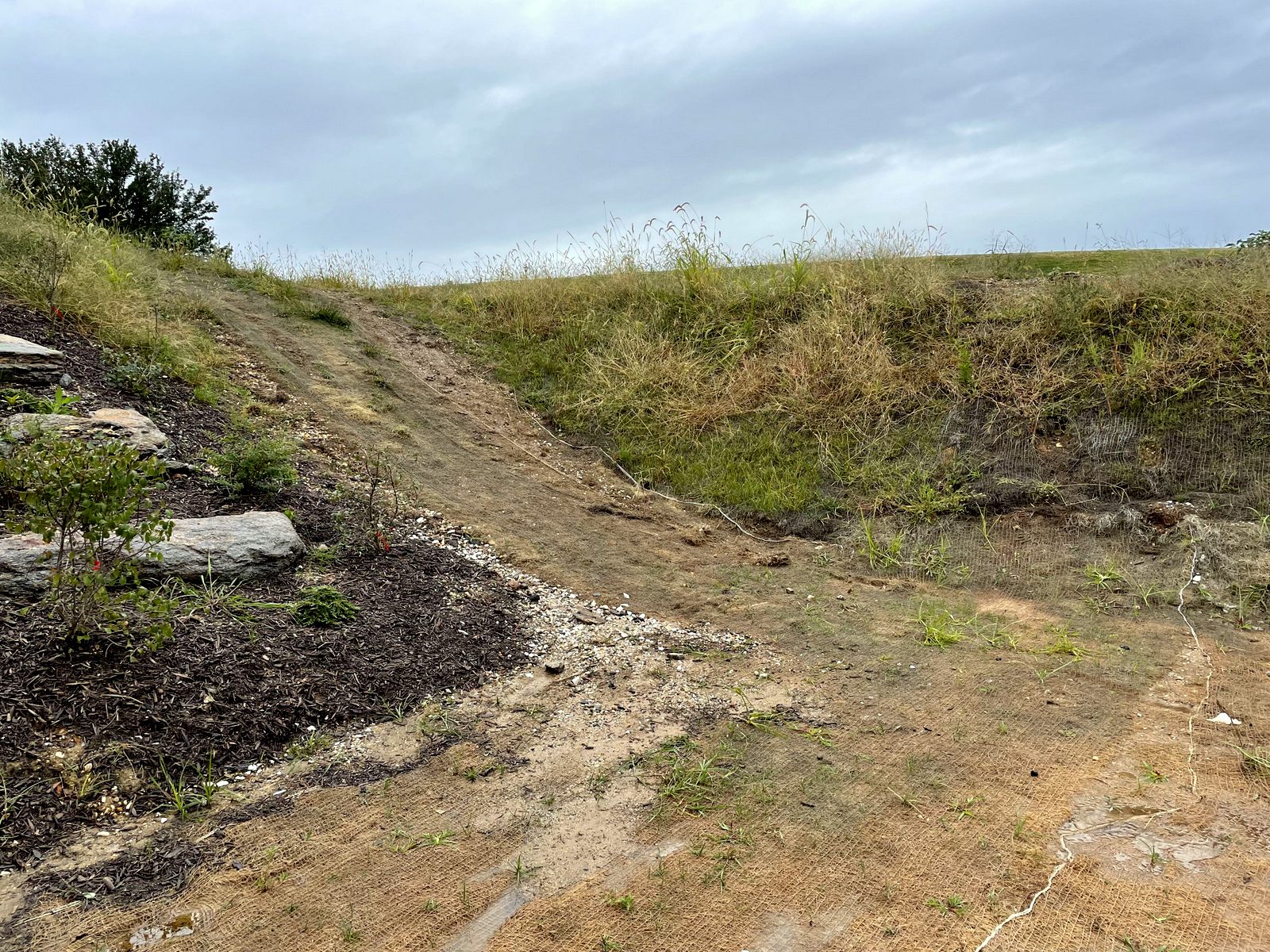 Part of the hill rising from the tunnel up to Curran Drive and Lake Montebello. Note the narrow band of DOT-contracted landscaping at left. (Mark Reutter)

What About the ADA?

Who will actually pay the bill to lift the pedestrian path out of its muddy terminus is uncertain, says Adam Boarman, chief of capital development for Rec and Parks.

Tearing down bureaucratic “silos” and expediting capital projects were supposed to be the tasks of the city administrator hired by Mayor Brandon Scott two years ago. But coordination continues to be propelled, or repelled, by different agencies.

Boarman says Rec and Parks hopes for “a potential connection” to Lake Montebello, but will defer to DPW “as far as when any improvements are made and who does them.”

Tearing down bureaucratic “silos” and expediting capital projects were supposed to be the tasks of the city administrator hired by Mayor Brandon Scott.

The sharp hill that rises from the tunnel to Lake Montebello and nearby Curran Drive may complicate those efforts.

Federal requirements under the ADA (Americans with Disabilities Act) may necessitate a zigzagging path rather than a straightforward set of stairs, which could, in turn, encroach upon the earthen breastworks of Lake Montebello.

Safety concerns by the Bureau of Water and Wastewater could torpedo any trail along the breastworks, a DPW insider warned.

What’s more, a sewer line that runs adjacent to the Harford Road Bridge could further hamper a future way forward. Not far away is the 1880s storm drain tunnel whose partial collapse on November 10 undermined the key water main that serves East Baltimore and downtown.

The resulting sinkhole forced the emergency re-routing of water to a smaller line at Lake Montebello, a reminder of the fragility of the city’s infrastructure.

More from The Brew Archives: 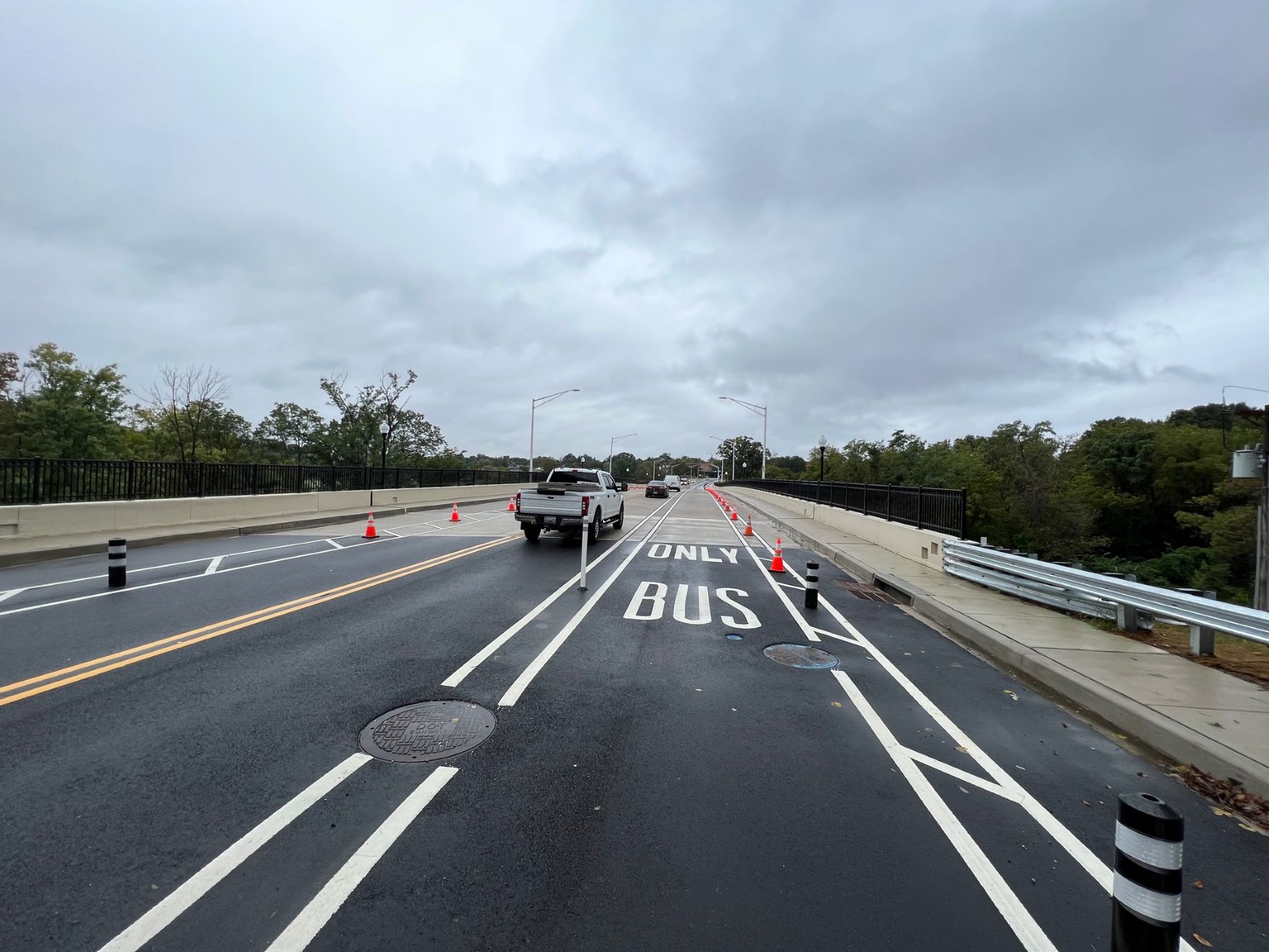