In December 2019, running for mayor, City Council President Brandon Scott announced he was returning $4,500 in campaign donations he had received from J.P. Grant.

His statement followed confirmation that the Columbia-based businessman, who was handling the city’s lucrative master leasing contracts, had secretly funneled $100,000 to former Mayor Catherine Pugh to help her buy a second home in Ashburton.

The former mayor had just pleaded guilty in federal court to fraud and tax evasion charges arising from other illegitimate “Healthy Holly” payments, and Scott wanted to take a stand during a busy news cycle.

“Cleaning up city government and restoring public confidence is my top priority” was the reason Scott gave for returning the Grant contributions. He subsequently abstained from approving another master leasing contract to Grant, which was pushed through by then-Mayor Bernard C. “Jack” Young.

Now that he is the mayor, Scott has accepted what he once rejected.

On October 31, his campaign committee reported a $5,000 donation from Grant, $1,000 short of the maximum contribution allowable, according to State Elections Board records.

Scott got still more money from two parties linked to the construction company that The Brew has identified as secretly financed by Grant.

That company is Commercial Utilities LLC.

The three contributions constituted 80% of the money that Scott raised in his most recent finance report, which covered the period October 24 to November 15.

The contributions by J.P. Grant, Judy Johnson and Ron Adolph, totaling $15,000, came two weeks before the Board of Estimates added $12 million to a contract that all three have links to. (State Board of Elections)

On November 16, the Board of Estimates approved a $12 million increase to the conduit contract that Commercial Utilities co-manages with KCI Technologies.

The contract TR-16020 – which started out at $26 million in 2016 and has since ballooned to over $120 million – is the financial lifeblood of Commercial Utilities, which otherwise boasts a small portfolio of scattered projects.

Construction costs channeled to Commercial consume about 80% of the contract’s total value, while KCI’s professional services constitute the other 20%.

Scott has said that contributions do not influence the votes he takes on the Board of Estimates. “Every single vote that I’ve taken is only based on one thing and that’s what is in the best interest of the citizens of Baltimore, and it’s done ethically and legally,” he told Fox45 News when he was running for mayor.

Scott has since said he is “very careful” to comply with the city ethics code.

Scott’s office did not immediately respond to questions about Grant’s contributions or the circumstances of the conduit price increase.

UPDATE: “We are not commenting on this matter,” the mayor’s spokeswoman, Monica Lewis, said in response to our questions.

Grant and Adolph did not return voice and email requests for comment. Reached today at her wellness center in Howard County, Johnson said, “I did that by myself [contribute to Scott].”

Asked why, she replied, “What I do is none of your business for real” before hanging up.

Johnson and Adolph have never before made campaign contributions to Scott, Elections Board records show. 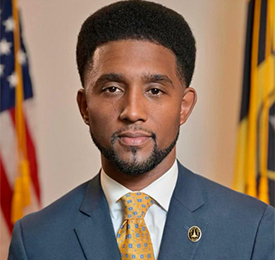 Brandon Scott says he votes only for the best interests of the city. His office announced the mayor is “not commenting” on the Grant and Commercial Utilities donations.

Technically, Scott did not approve the $12 million price increase because he did not attend the November 16 BOE meeting.

Instead, his appointed designee, City Administrator Christopher Shorter, voted for the measure.

“The timing of the donations and the alleged relationship of the contributors to the contract would suggest a possible conflict”  – Retired chief state investigator James Cabezas.

The sequence of events gives the appearance of a conflict of interest, James Cabezas, retired chief investigator for the Office of the State Prosecutor, said in an interview.

“The timing of the donations and the alleged relationship of the contributors to the contract would suggest a possible conflict. If I were State Prosecutor [Charles] Howard, I would want to check the bank records of the contributors,” Cabezas said.

The cost increase for the Commercial-KCI contract was approved on November 16.

The Brew has tracked the conduit contract, starting from its mysterious origins as a single-source agreement to repair and upgrade the tube-like ducts that carry electric, telephone and fiber-optic cables under city streets.

There are hundreds of miles of these subterranean ducts, some dating back to the 1890s, used by Baltimore Gas and Electric, Comcast, the University of Maryland, Bank of America, Kennedy Krieger Institute and the city itself to support its street lighting and traffic control systems.

Private users pay an annual “conduit occupancy fee” to the city. In 2015, the Rawlings-Blake administration upped that fee, sparking a lawsuit by BGE that was settled when the administration pledged to rehabilitate the network, using the increased fees to underwrite the costs. 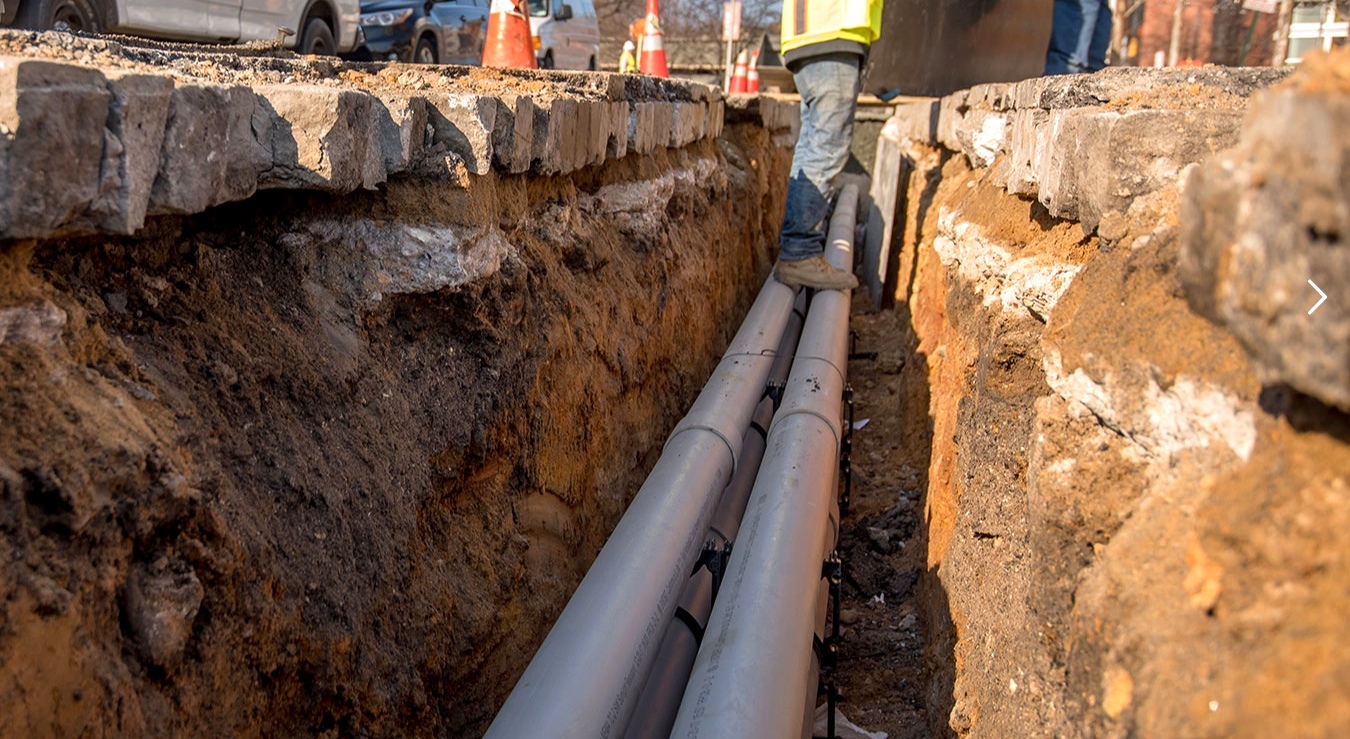 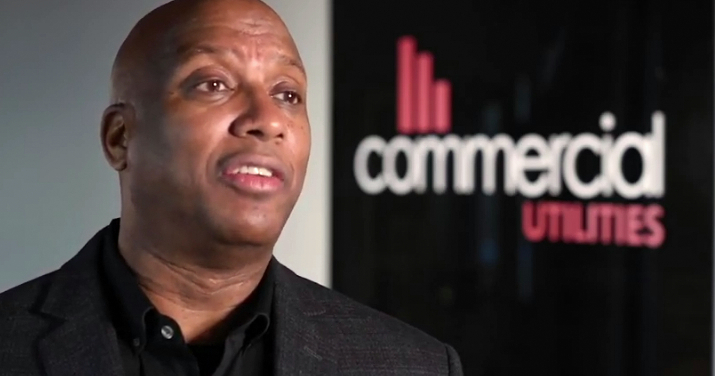 From this legal and financial landscape arose TR-16020, a “design-build” contract that had unusual features from the get-go.

Most unusual was the stipulation that Whitman Requardt & Associates and two other firms best able meet the financial qualifications were ineligible to compete.

The end result was that one group wound up as sole bidder on the contract, which was then “mistakenly” submitted to the Board of Estimates as worth only $26 million – a price low enough for the winning bidder to meet the city’s financial pre-qualifications.

That winner was KCI-CG Tri-Venture, a group consisting of KCI Technologies and Commercial Group. The latter was headed by Kevin Johnson, a former drywall installer then in the midst of completing the cost-overrun-laden Greyhound Bus Terminal in South Baltimore.

The conduit project began to consume large amounts of cash when the city decided to tear out and enlarge the duct bank under Greenmount Avenue to meet future BGE and broadband requirements.

Much to the dismay of Waverly businesses, the 1.25-mile rebuild between 29th and 43st streets took two long years to finish.

When it was finally completed last July, the price of the contract had skyrocketed to $98 million.

Commercial Utilities estimates the contract will end up at $130 million – five times the $26 million originally approved.

On July 20, the Board of Estimates added another $10 million to the agreement. The vote was unanimous, with Finance Director Henry Raymond acting as the designee for Mayor Scott, who was again absent.

That brought the contract up to $108.7 million.

The vote on November 16 boosted the price tag to $120.7 million, which the city Department of Transportation justified as necessary to “support the essential scope of the conduit program during the Covid-19 pandemic and other emergency conduit repair work.”

DOT has not specified what it expects the contract’s final price tag to be.

But Commercial estimates TR-16020 will wind up costing $130 million – or five times the $26 million originally approved in August 2016. 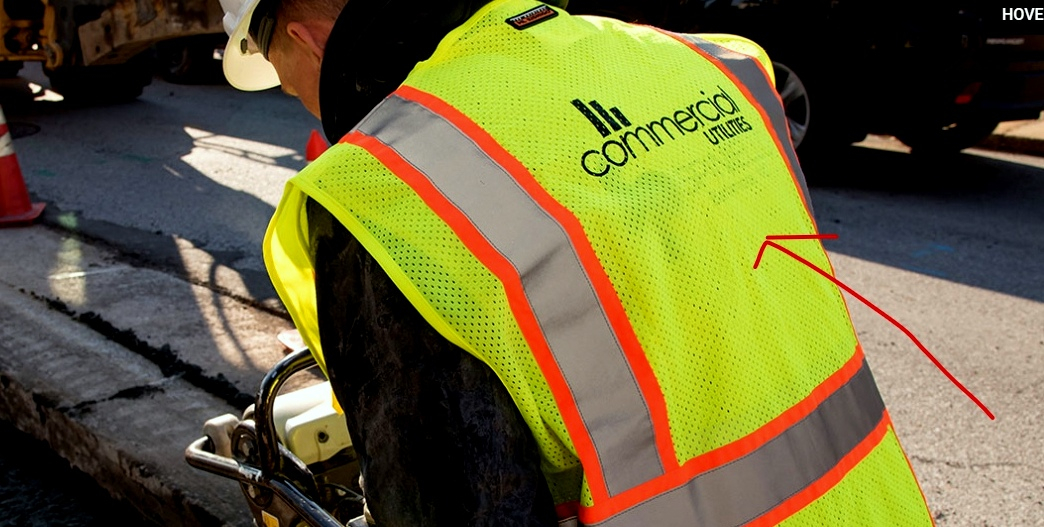 The conduit contract is the lifeblood of Commercial Utilities, which has relied on Spiniello workers to do the actual work, as indicated by the Spiniello logo seen beneath this Commercial safety vest. (commercial-group.com)