After word spread that the Greek Orthodox Cathedral of the Annunciation wanted to tear down a set of 1890s rowhouses in Mount Vernon, the response from the public was forceful.

By mid-morning, 156 people had sent in letters or emails to oppose the demolition, the city’s preservation chief, Eric Holcomb, said at a hearing today.

By a unanimous voice vote, they decided that the houses at 35-43 West Preston Street “contribute to the character” of the historic Mount Vernon District, an important determination the commissioners will take into account when they consider the church’s request to demolish the buildings.

“Yes!” shouted several in the audience of about 30 people amid applause and cheers.

CHAP staff had recommended that CHAP take this step, pointing out that Dr. Esther Loring Richards, a professor of psychiatry at Johns Hopkins, had lived at 41 West Preston.

“Richards was a nationally significant figure in pediatrics and psychiatry and is therefore significant to the city of Baltimore,” the staff wrote, citing her published works and noting that she “taught a whole generation of medical students until her retirement in 1951.”

Trailblazing Johns Hopkins psychiatrist, Dr. Esther Richards, lived in one of the houses targeted for demolition.

The row of houses, designed by architect John Appleton Wilson, were described as “unique to Baltimore” and a superb example of late 19th century Colonial Revival and Eclecticism styles.

Another staff conclusion contrasted sharply with the church’s contention that the vacant properties were too dilapidated to be saved.

“Their structural integrity is not compromised,” their report concluded.

Caroline Hecker, the church’s lobbyist, attended but did not speak at the meeting.

She will have an opportunity to make her case at a second meeting after which CHAP will vote on the demolition request. 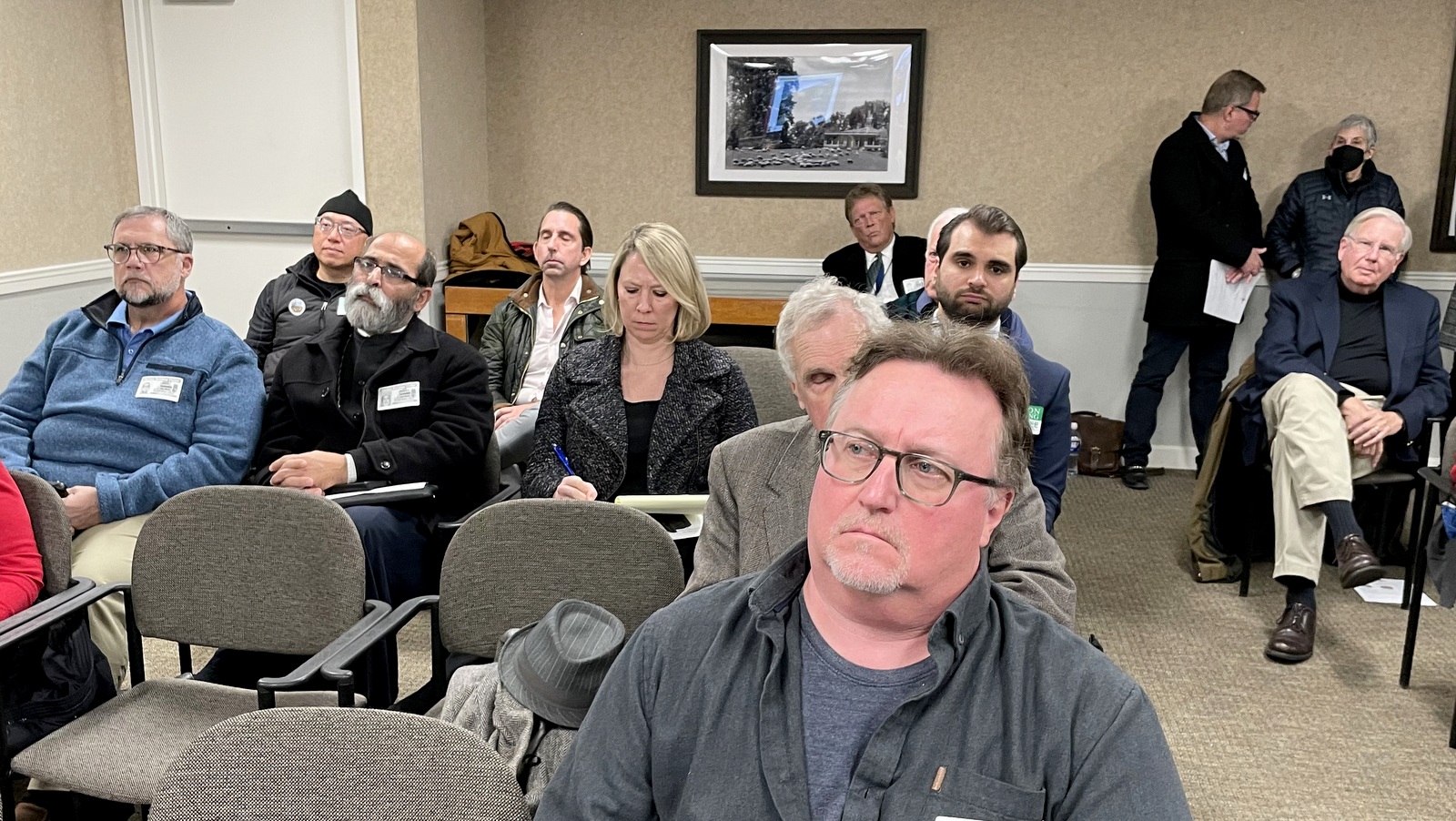 Given the staff recommendation and commissioners’ findings, the speakers today were preaching to the choir.

But preach they did.

“This block of buildings – it should be obvious to anyone that they’re just lovely and beautiful,” said David Weisand, a 36-year resident of Mount Vernon who owns two businesses there.

“Mount Vernon needs people,” Weisand said. “It’s a village and the need for housing – especially beautiful housing like this – we cannot let this opportunity pass us by.”

Attorney John C. Murphy invoked the French phrase that was central to the creation of the country’s first historic district in New Orleans – tout ensemble, meaning all together.

“If you take down these buildings, you’re damaging the other buildings. They all draw sustenance from each other,” Murphy said, describing Baltimore as “a living laboratory” of historic buildings that have been successfully restored.

“I was inside. You should see it in there – the moldings, the staircases, the mantels,” she told The Brew after the meeting. “They just cannot tear all this down.” 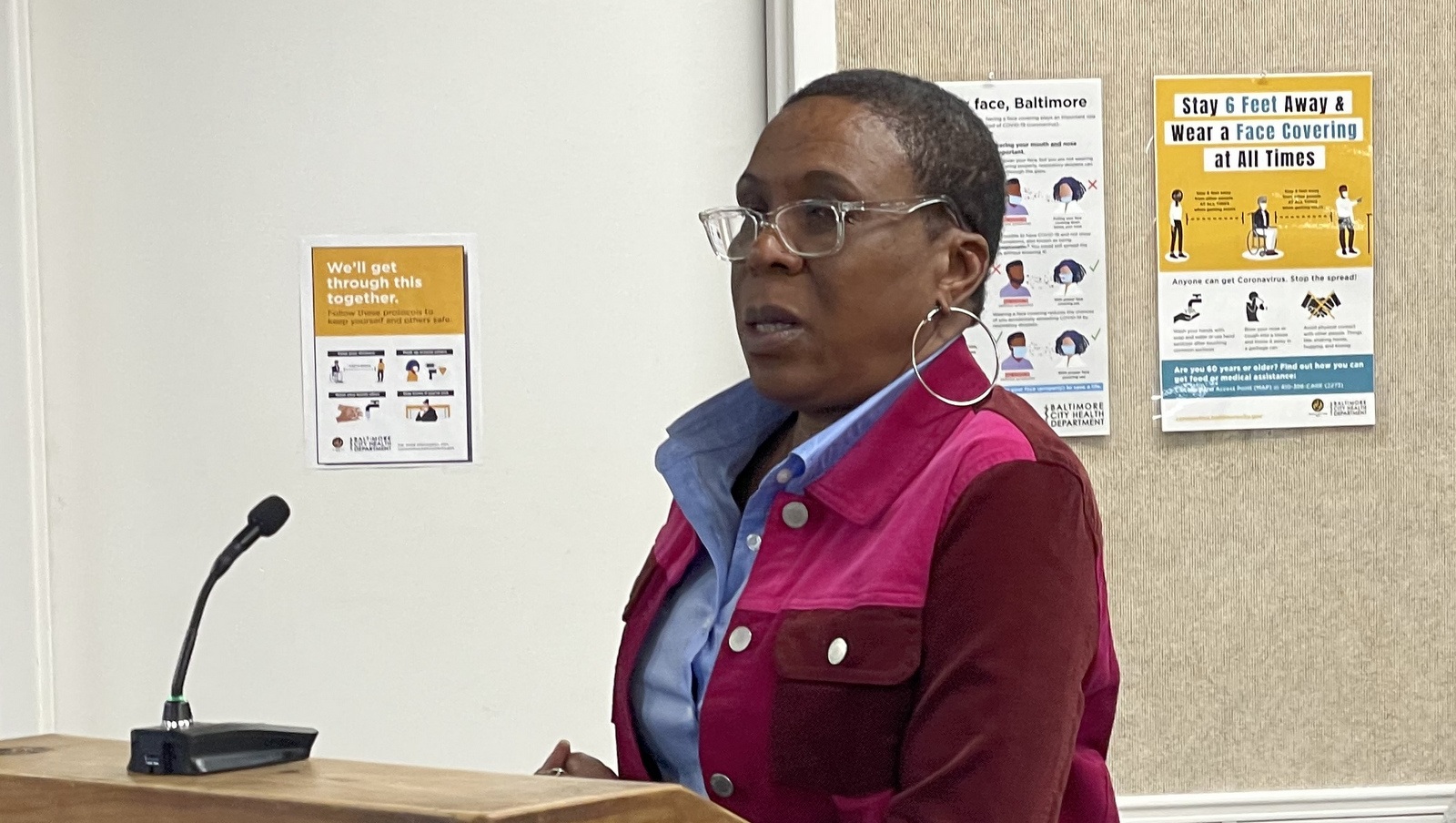 Photographer Lashelle Bynum called the threatened buildings beautiful inside and out. (Fern Shen)

Charles Duff, of Jubilee Baltimore, said his company is working with a project that is rehabbing buildings on 22nd Street that are in much worse shape than the ones on Preston Street.

“We Baltimoreans rebuild buildings like this every day and we can do it here,” said Duff, who has toured the structures.

Johns Hopkins, executive director of Baltimore Heritage, who has also been inside, said the conditions of the houses vary.

The two on either end “are in quite good shape,” while the rears of two properties are “not in good shape but still retain their integrity.”

The middle structure – 39 West Preston Street, “the one with the tree” growing out of it – “retains integrity in the first room, but not so much in the back.”

All of them are intact enough to meet CHAP criteria, Hopkins said, citing other more dilapidated properties that have received CHAP tax credits. 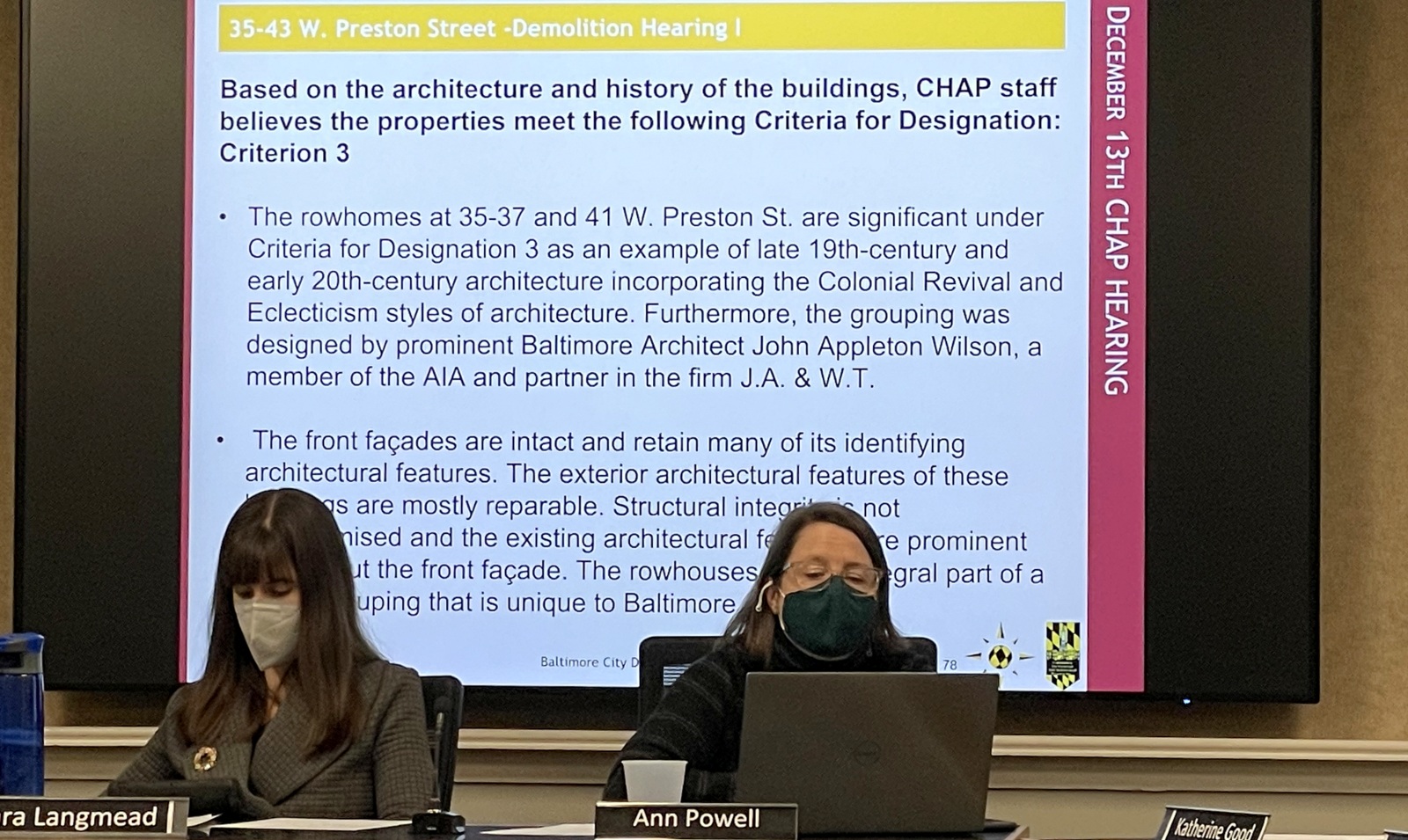 Staff presentation at the hearing on the Greek Cathedral’s proposal to demolish five rowhouses on Preston Street. (Fern Shen)

Hopkins closed by commending the church for its decision in the 1930s to buy the vacant church building that became their main sanctuary at 24 West Preston Street.

“The church was a fantastic neighbor and saved the building,” Hopkins said. “We are asking that the church, just as it respects and values its own history, now respect and value Mount Vernon’s history.” 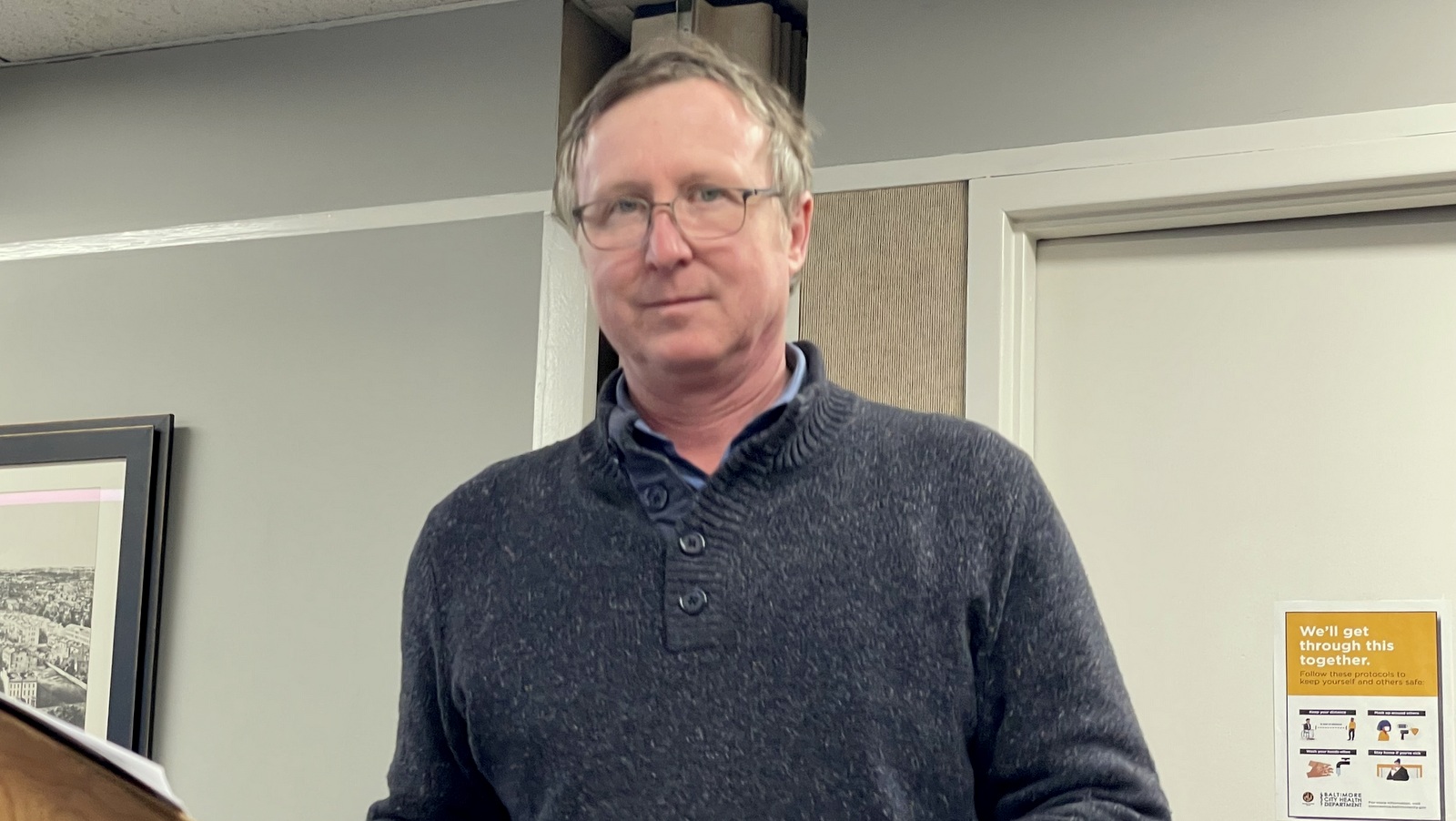 Jack Danna, president of the Mount Vernon-Belvedere Association, had a sharply different opinion.

“The cathedral has not been a good neighbor and steward of those properties,” he said.

He called it “shameful” for the church to tout its $91,000 investment over two decades in the properties.

“That comes to about $900 a year in maintenance for each,” he said.