The city’s spending board yesterday allocated another $669,007 to fix last year’s botched reconstruction of Roland Avenue, this time to “protect” the stately procession of Zelkova trees on the median strip and to pay for improved drainage and brick pavers.

The latest cost overrun will hike the cost of the Roland Avenue Improvements and Traffic Calming Project (TR 12314) to $6,708,265.77 – or 72% above the original bid price. The project involves about 1.2 miles of roadway between Cold Spring Lane and Northern Parkway.

The 272 Zelkovas were impacted when contractor M. Luis was ordered by the city Department of Transportation to replace 16,200 linear feet of too-low curbing – some curb sections being no higher than the roadway itself – after repaving was completed last June.

The move was made after some residents had experienced severe flooding and complaints were registered at the highest levels of City Hall.

DOT never acknowledged that the curbs were too low in the original construction drawings, instead insisting that unexpected drainage problems were the cause of the decision to replace the curbs. This was done after the agency stonewalled the community for several weeks  about the too-short curbs, which violated DOT’s own regulations requiring curbs to have a “reveal” of 4-6 inches.

In July 8, 2015, for example, DOT Project Engineer Paul Goldbeck emailed a colleague: “The drainage issues and low profile of the curb that the community is complaining about is being investigated. There is no information to pass on to the public at this time, unless [other DOT officials] would like to make a statement.”

This was fully a month after Division Chief Bimal Devkota had written to Goldbeck: “We have to do the work [replace the curbs]. How best we can do and what the total cost for doing all the problems you are talking about.” Devkota said he was responding to complaints by the Roland Park Civic League.

When asked in a subsequent email why “construction did not fix curb issue from the start,” Goldbeck forwarded an April 6, 2015 email he said he had sent to his DOT superiors.

It read: “This email is to give you notice that the existing roadway and curb grades on Roland Avenue will not be changed as per the TR 12314 construction drawings. Since there is No grading changes, there will be ponding water at all the ADA ramps and bus pads.”

Goldbeck said he received “no response” to the email, so the low-profile curbs and existing grades were followed by the contractor.

“It is Going to Get Way Worse”

After the community uproar about flooding caused by the lack of proper curbing and grades along the repaved road, M. Luis was handed a work order by DOT to reconstruct the median and roadway curbs.

The contractor began ripping into the median last September with backhoes and large mechanical shovels, scooping out the old curbing and piling debris beside the Zelkova trees, in some places badly tearing their roots and in other places exposing the root system.

The rough handling of the trees prompted Bill Vondrasek, chief of parks, to write a series of emails complaining about the contractor’s practices, according to correspondence obtained by The Brew under the Maryland Public Information Act.

“I know this project has been very complicated with more changes than anyone would like,” Vondrasek wrote in one email to Devkota, Goldbeck, DOT Director William Johnson, Deputy Mayor of Operations Khalil A. Zaied, and others.

“But after seeing the trees yesterday, I can assure you it is going to get way worse in terms of community backlash when most of the trees are 60 percent dead or more.”

If M. Luis’ median work is not altered and remedial efforts not undertaken immediately, “We will have a median with beautiful new curbs filled with large dead trees,” Vondrasek told them last September 15. 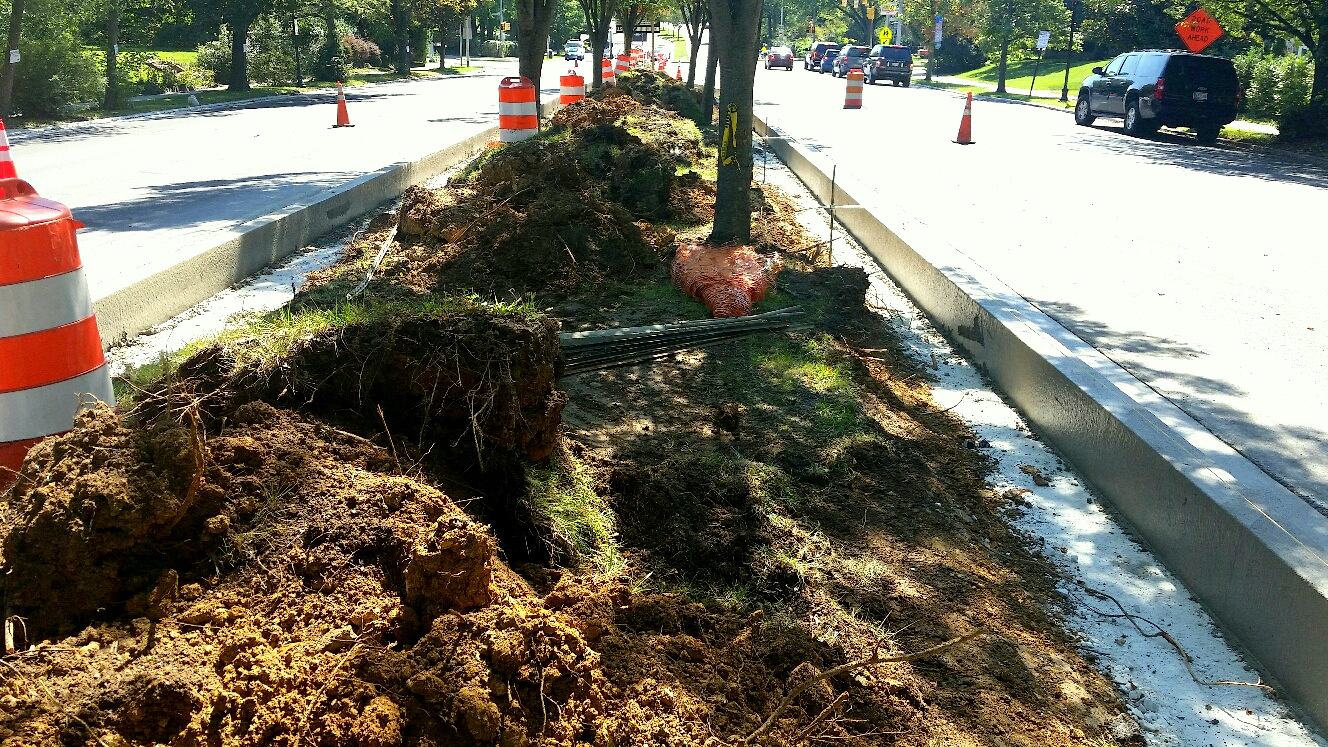 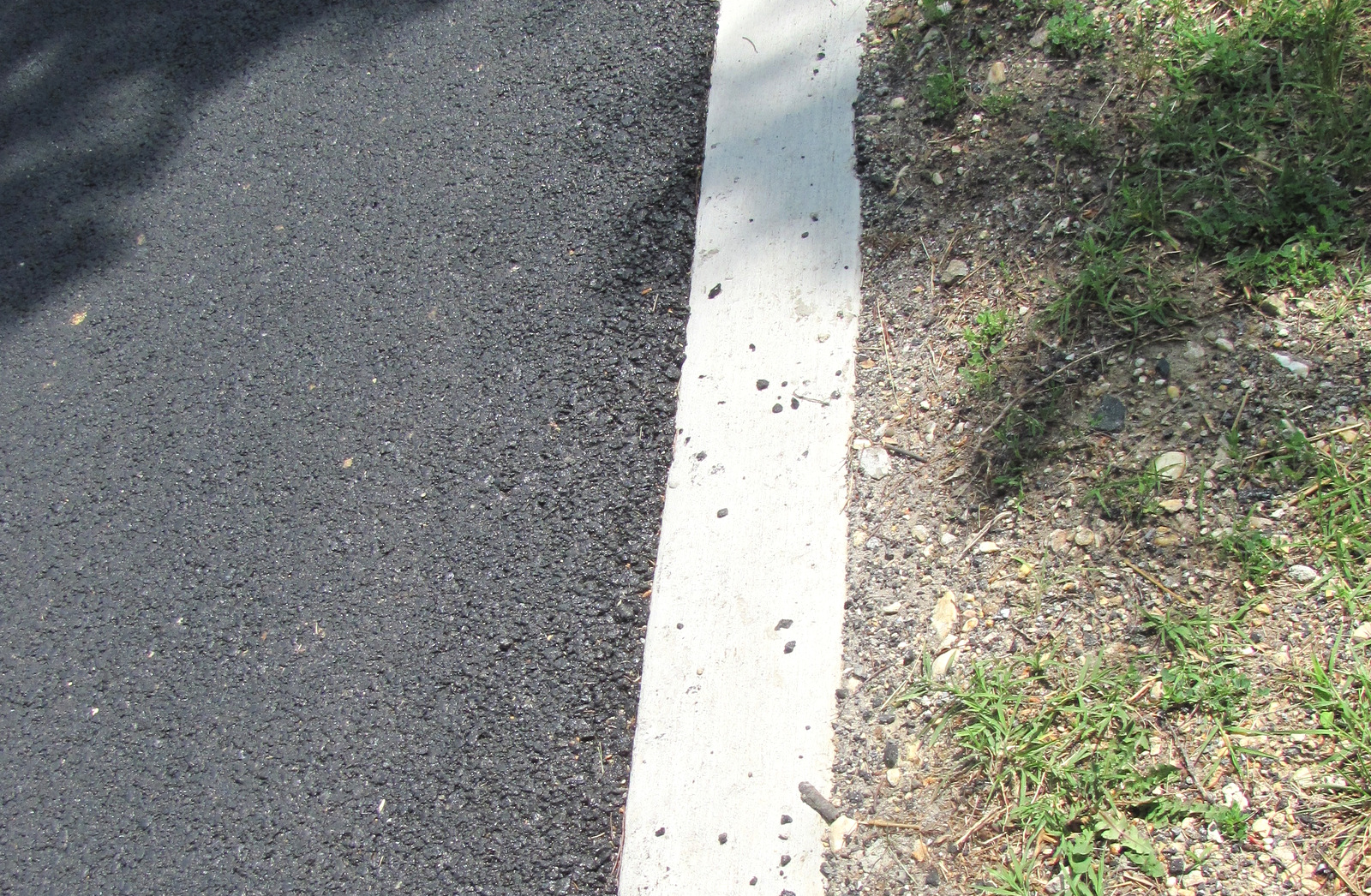 Example of the original curbing along the median strip, with no curb “reveal” against the repaved road. (Mark Reutter, August 2015)

He demanded that the contractor be ordered to stop work for a day or two while emergency pruning was done by outside tree experts.

“I cannot over-estimate how important this is,” Vondrasek wrote. “We keep meeting and e-mailing and nothing changes, the contractor just keeps plowing along.”

Vondrasek’s recommendations were followed, and the Roland Park Civic League hired an arborist. About $50,000 worth of root pruning, vertical mulching and deep-root fertilization and watering was conducted on the trees in the median and curb strips, according to DOT correspondence.

“The community really appreciates your attention to this urgent matter,” Chris McSherry, president of the Civic League, wrote back to Zaied and Johnson, thanking the city for paying for the arborist and “also agree[ing] to replace any of the trees that do not survive this construction project.”

From The Brew Archives:

Last fall’s efforts appear to have paid off.

The Zelkovas have leafed out this spring and seem reasonably healthy. Yesterday’s allocation of funds is for additional work to protect the trees along roadway, according to the Board of Estimates agenda.

The work “will be completed at the request of the community to Baltimore City Department of Parks and Recreation [stet],” which “also strongly recommends that this work to be done,” the agenda said.

In addition to protecting the trees, the new funds will go to improve the drainage flow at three cross-streets (Oakdale, Upland and Wyndhurst), ADA ramp adjustments and brick paver reconstruction in front of the Gilman School and the Roland Park Elementary/Middle School.

Some of the latter work was needed after Midasco LLC, a city subcontractor, damaged Gilman property while installing new traffic signals, according to DOT emails.

Adding up the Costs

Yesterday’s Extra Work Order, or “EWO,” is the fourth adjustment to TR 12314 since the contract was awarded to M. Luis in late 2014.

Meanwhile, DOT has completed the cycle track along Roland Avenue, the subject of several contentious meetings at the Civic League, with a number of Roland Park residents and business owners strenuously objecting to the track’s configuration.

Green strips have been installed at intersections to protect bicyclists from motorists turning off of Roland Avenue who otherwise might not see the cyclists because their view is obstructed by cars in the new parking zone located between the curbside cycle track and main roadway.