It was a dramatic first hearing day for Baltimore’s new Liquor Board.

By a 2-1 vote, the commissioners last month extinguished the liquor license of a gay bar in Mt. Vernon under protest by residents who said the neighborhood fixture had become a dangerous nuisance.

Witnesses against The Drinkery gave testimony about being frightened or awakened in their homes by fighting, screaming and the sound of bottles breaking at its 203-209 Read Street address.

According to a petition submitted to the board, 284 calls were made to police in the past year to report disturbances. Two police officers described responding to calls for an assault and a stabbing and arresting a man for having an illegal weapon.

The Drinkery’s defenders painted a very different picture, saying that the bar was a friendly place.

“I’ve never seen a fight inside,” said customer Anthony Pressley. Long-time licensee, Frederick Allen, said he couldn’t be responsible for what happens outside. The bar’s attorney, Melvin Kodenski, pointed out that no one had been arrested inside the establishment.

After an explosion of online anger about its decision, the new Liquor Board reversed itself last Thursday, again by a 2-1 vote.

The reason cited? The commissioners learned, via the Drinkery’s motion for reconsideration, that one of four witnesses against the bar, Jason Curtis, is a licensee for a nearby establishment, the Hotel Indigo.

Curtis had not disclosed this fact.

Video of the June 2 hearing in which the Liquor Board reversed its decision in The Drinkery case.

State law specifies that a liquor license protest petition shall be “signed by not less than 10 residents, commercial tenants who are not holders of or applicants for any [liquor] license issued under this article, or real estate owners in the immediate vicinity in which the licensed place of business is located.”

Commissioner Aaron Greenfield, agreed with Kodenski and said that Curtis’ testimony was “a violation of the rule.” Chairman Albert J. Matricciani Jr., said he did not find “sufficient grounds” in Kodenski’s argument and voted against restoring the license.

The decision came down to Commissioner Dana Petersen Moore.

She had opposed renewal on May 19, but supported it on June 2, saying she was “concerned” by Curtis’ testimony. “He’s not just a licensee, he’s a competing licensee,”  she said. “I feel it’s only fair to grant the motion for reconsideration.”

Leading up to Thursday’s reversal, the case was argued in dueling legal briefs. (Reconsideration is permitted if the original decision was based on “fraud, usurpation, surprise, mistake or inadvertence.”)

Kodenski made a number of arguments, including that the state liquor law never intended to create “the draconian result” of non-renewal of a license. But the only argument the commissioners referenced in reversing themselves was that Curtis’ testimony was improper.

Community Law Center attorney Becky Lundberg Witt, who represented the protesting Mt. Vernon-Belvedere Association, argued that Curtis’ testimony was valid and that the law specifies a decision can’t be reconsidered because of “a mere change of mind.”

She said that Curtis was testifying not as a commercial tenant but as an area resident (he lives on Chase Street in the Belvedere) and as the former president of the Mt. Vernon-Belvedere Association (he headed the group for 14 years, concluding his tenure in December.) 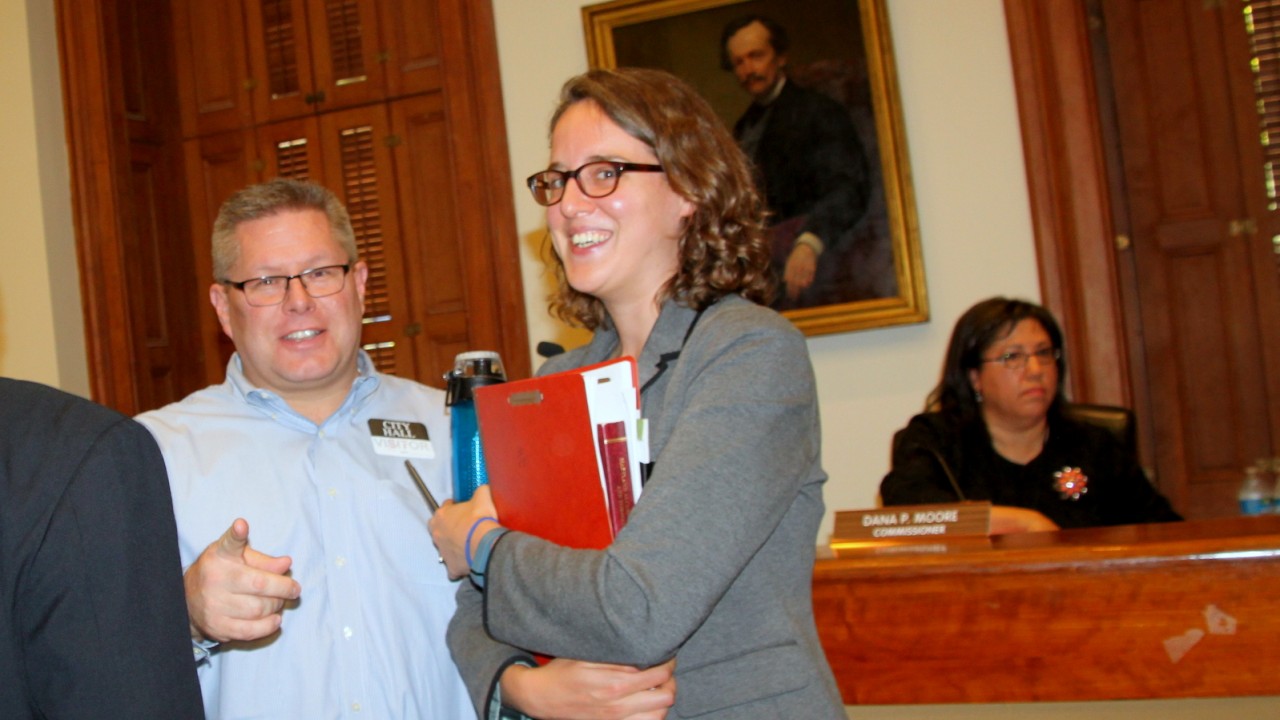 Jason Curtis and Becky Witt after the Liquor Board’s 2-1 vote in May to extinguish the Drinkery’s license. (Fern Shen)

Witt argued that even if Curtis’ signature wasn’t valid, there were 35 names on the petition, more than enough (a minimum of 10 are required), so his name was not needed. The rule, she said, applies to the petition signers, not the witnesses.

“Once a protest is filed, any person may be heard at the protest hearing,” she said, quoting the 2008 Pridgeon v. Board of License Commissioners for Prince George’s County case.

Curtis’ failure to disclose was not the only lapse during the board’s hearings. Among the witnesses Kodenski called to vouch for the Drinkery was Abraham Hurdle.

Hurdle, a resident of Read Street, said that he has “never had problems with The Drinkery.”

“Are you co-counsel in this case?” Chairman Matricciani asked him after he had finished. Hurdle acknowledged that he was, adding “I helped write one of the motions.”

“Why didn’t you disclose that up-front?” Matricciani demanded, glowering.

Outside of the dry realm of legal argument, the decision to extinguish the Drinkery’s license had been debated in the community with fervor.

During the first hearing, the only charge of racism leveled was against licensee Allen, who is white. Mark Henderson said Allen use the “n-word” in his presence, and that Allen had sent him a threatening note that he considered racist.

But afterwards supporters blasted the board, alleging racism and classism in the shutdown of the decades-old gay bar known lately for its racially diverse clientele.

“I haven’t been back very much in the last couple of years,” wrote blogger Mark Miazga, “but when I was first navigating the LBGTQ bars in the city, it was easily the one that felt most welcoming.”

“The targeting by largely white neighborhood members of the gay bar whose clientele is largely African-American always had the stench of racism and gentrification-fueled scapegoating,” Miazga wrote.

(All four residents who testified against the bar were white. Of them, three were gay men.)

Video of the May 19 hearing. The Drinkery case starts at about 1:33.

Drawing a contrast, Miazga observed that in places like Federal Hill, Canton and Fells Point, the phenomenon of “mostly white people loudly carousing in the streets” is allowed.

Taking issue with that on Facebook, Fells Point’s Joanne Masopust said that “noise, fighting, public urination and property destruction have no skin color.”

“It’s not fair to dismiss the very real struggle that people in the neighborhoods mentioned have made to close bars that were flagrant lawbreakers and/or had underage or problem patrons,” Christy Wolfe, also of Fells Point, wrote. “We do not walk around saying La La La these assholes are white so we don’t mind them. Far from it.”

Some argued that the nuisance issues raised by Drinkery critics are real. Others questioned how a reversal could be based on one witness’ failure to disclose a conflict. “Geez, seems like a pretty trivial point, was his testimony that critical?” a Facebook commenter said.

Beyond the debate over the specifics of the reversal decision or the legitimacy of the complaints, dismay over the changing nature of traditionally funky, gay-friendly Mt. Vernon has also rippled through the controversy.

Many mourned the loss last year of another area gay bar, the iconic Hippo, whose owner said it was being sold and converted to a CVS drugstore. For them, the shuttering of The Drinkery represented the loss of one more bit of local LGBT culture. And when last Thursday’s reversal came, they cheered.

“Hell yeah!” crowed a commenter on Baltimore Reddit. “The ‘gayborhood’ was beginning to look a lot less gay after Hippo, Jays and the Eagle closed.”