Reassured that developer Michael Beatty is not earning excessive profits, the Board of Finance today approved $39 million of tax increment (TIF) bonds for the second stage of infrastructure building at Harbor Point.

The amount is nearly three times the original $14 million in Phase 2 bonding for the waterfront development.

The Baltimore Development Corp., which oversees the project, upped the costs of various infrastructure that the city will pay in Phase 2, including $7 million more for a central plaza fronting the Exelon Tower and $3 million for a sewage pumping station that was not planned when the city agreed to support Beatty’s project in 2013.

Comptroller Joan M. Pratt, who sits on the board, abstained from approving the bond issuance because she said the Finance Department did not give her enough time to review the material.

“My concern is that our last meeting was on May the 9th, and I wasn’t given the information on the ‘but-for’ test and reallocation of funds until Wednesday evening, which isn’t enough time for I and my staff to review it,” she said.

Walter Horton, an aide to Pratt, expressed worry that city resident are “going to lose the public benefits” of a waterfront promenade and park at Harbor Point because of the Phase 2 cost overruns.

Budget figures show that the promenade and Point Park are slated to receive about $20 million fewer TIF funds than originally promised when the project was approved by the City Council in 2013.

City officials told the board that won’t happen.

“We believe we can absolutely do that [keep the park and promenade intact] with the way the project has been phased and redesigned,” said Steve Kraus, deputy director of finance.

Dan Taylor, project manager for BDC, explained it another way.

“The differences in the park costs in Phase 3 are not going to be seen when you are walking along the parks. There will still be the same fixtures and the same furnishings, the grass and the trees,” he said.

That’s because, Taylor said, “the engineering required to build those parks has gone down. As we’ve gotten into the site, what we’ve found is there is less structure to be put in place to support things like the promenade and Point Park.”

For example, most of the promenade can be built on land, Taylor said, compared to the original plan of building much of the structure over the water, which “is many times more expensive.”

Taylor’s optimistic words were contrary to what Colin Tarbert, deputy mayor for development, told the BDC in closed meetings in March whose minutes were released after The Brew, Baltimore Business Journal and Baltimore Sun protested the closed sessions to the Maryland Open Meetings Compliance Board.

Tarbert described Harbor Point as a prime example of the risks of not having enough TIF capacity, which will require the city eventually “to dip into the general funds in order to complete the project.”

Tarbert used Harbor Point as a warning that the city must have enough TIF capacity to bankroll the infrastructure of Port Covington for Under Armour CEO Kevin Plank.

The opened BDC minutes revealed that Plank’s real estate company had originally proposed $400 million in TIF bonds, but the BDC and Rawlings-Blake administration called for $535 million – or 33% more – to cover contingencies and unexpected costs.

In the case of Harbor Point, a major cause of its increased needs for more bond money for Phase 2 is to cover unanticipated costs of building the Exelon Tower over the capped portion of the site.

In discussing the profits going to Harbor Point’s developer, Keenan Rice, the city’s financial advisor, said it was nearly impossible to say how much Michael Beatty earned upon selling the Morgan Stanley Building at Harbor Point in late 2013 because of various loans and land transactions tied up in the deal.

Rice said it was probably fair to say the investors got back their principal and an interest in three other real estate projects, and that Beatty and his backers made a profit but “not an extraordinary profit.” 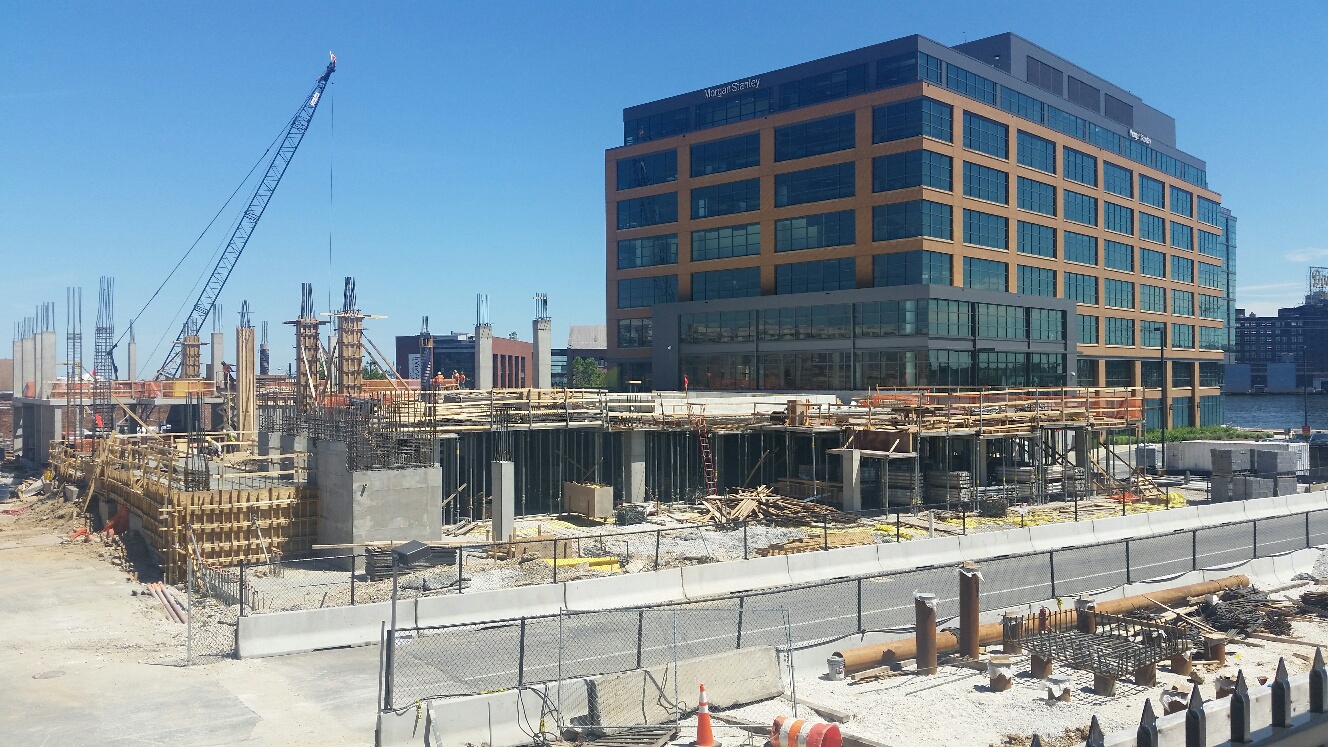 The Point Apartment Building is rising at Harbor Point next to the Thames Wharf building occupied by Morgan Stanley. (Mark Reutter)

There has been a total of 341 new hires by companies working on the project, of which 195, or 57%, are listed as city residents.

“That is quite impressive,” said board member Dana Moulden before she and three other members (Larry I. Silverstein, Frederick Meier Jr., and Kaliope Parthemos representing Mayor Stephanie Rawlings-Blake) voted to authorize the Phase 2 TIF allocation.

Pratt said after the meeting that when BDC said there would be a reduction in costs in Phase 3 because of better engineering, “I was wondering why isn’t there a reduction in the need for the TIF? That was one of the things I am concerned about.”