A young couple in bathing suits balancing on stand-up paddle boards – their dog along for the ride – splashed each other, clambered in and out of the water and finally just laid out on their boards under sunny June skies.

A big brown turtle basked on one on one of the orange booms positioned to catch trash coming out of a storm water outfall.

But this recent scene was not Maui or a photo-shoot for the Title Nine catalogue – it was the famously foul lower Charles River, just above Boston Harbor.

For a visitor from Baltimore,  the two waterfront cities have a lot in common but the contrast on water quality was striking.

Boston and surrounding communities, like Baltimore, have for years been treating their waterways like a giant toilet bowl, dumping millions of gallons of sewage into them along with a potpourri of other pollutants.

Boston, again like Baltimore, has been the subject of federal orders requiring it to clean up its act. But unlike Charm City – where the latest Inner Harbor grade for water quality was “F” – Boston has managed to comply with that mandate.

Consider where both cities were in 1995: 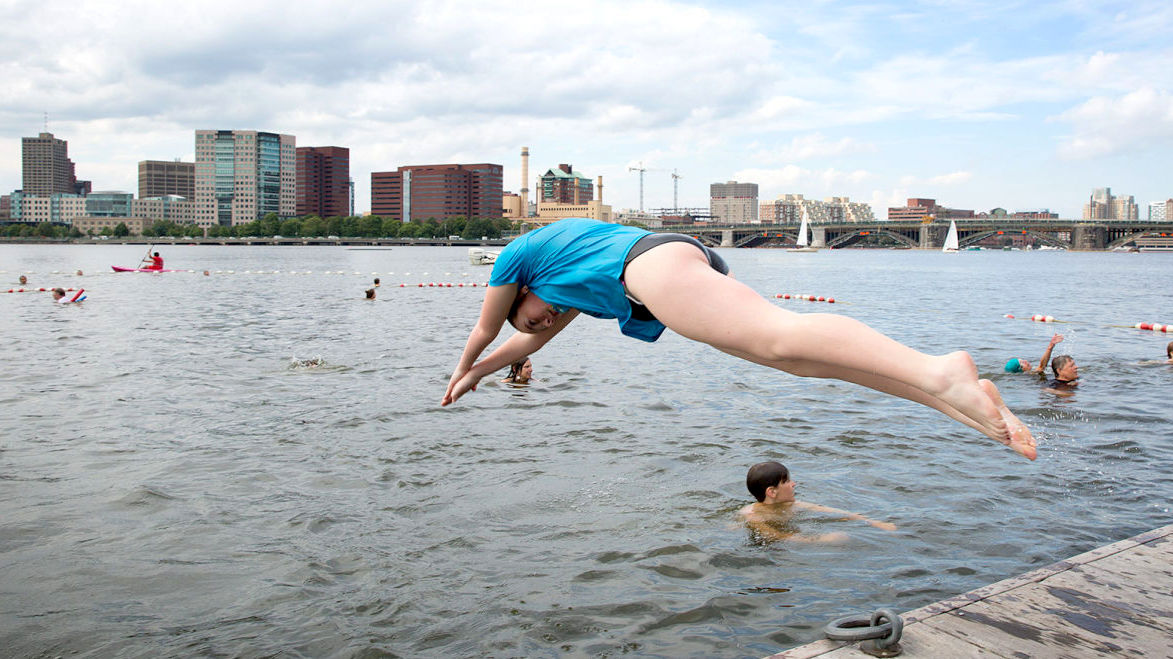 Given an A- grade by the EPA, the city had made major progress eliminating wastewater connections and overflows that had sewage mixing with stormwater runoff. And they held the first sanctioned public swim, something that has become an annual tradition.

“Perfectly clean,” declared Matthew Beaton, Massachusetts Secretary of Energy and Environmental Affairs, speaking with reporters while treading water near Fiedler Dock along with about 200 other people.

Which brings us to Baltimore.

Charm City also came under scrutiny by the feds at the end of the 1990s, culminating in the 2002 consent decree in which the city promised to stop releasing raw sewage into the Jones Falls.

Fast-forward to this year, 14 years later, when Baltimore’s consent decree deadline was up – nobody was jumping for joy into clean waters.

• Even on a substantial curve, the Inner Harbor received a failing water-quality grade for the third year in a row from the Waterfront Partnership.

• After spending $700 million and tripling water and sewer rates, Baltimore had blown its deadline badly. Only half of the necessary work has been completed.

• Raw sewage still pours into the Jones Falls (and, hence, into the Inner Harbor and Chesapeake Bay) and backs up into homeowners’ basements. One outfall alone spewed 30 million gallons of sewage into the stream this winter. 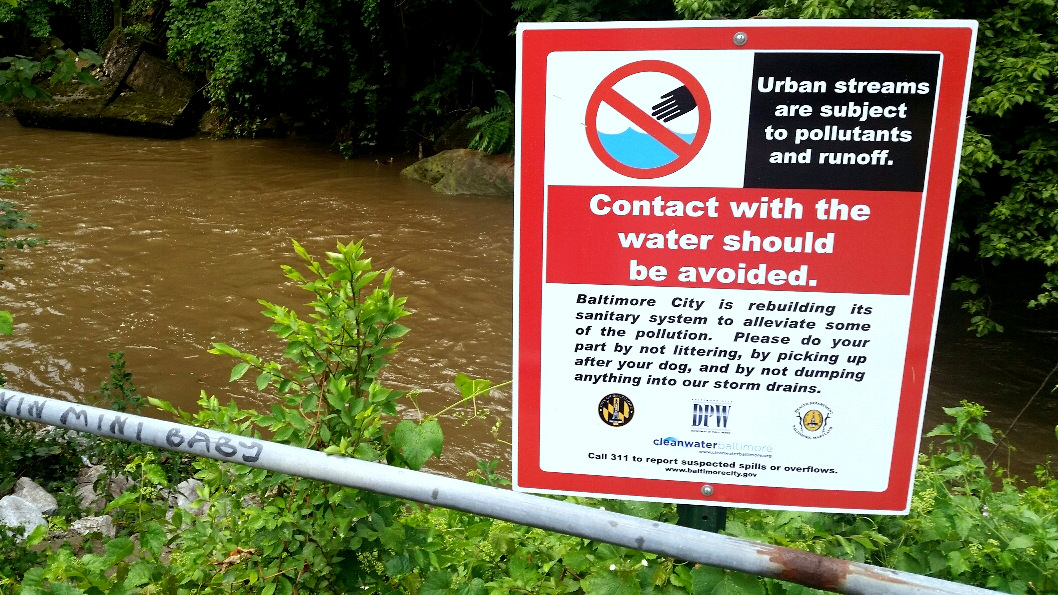 At the rate it’s going, Baltimore is not going to have a “fishable, swimmable harbor” as promised by Mayor Stephanie Rawlings-Blake in 2011.

Under a revised consent decree disclosed last month, so-called “structured overflows” – or the intentional release of human waste designed to relieve pressure on a malfunctioning system – would continue for another six years, until July 1, 2022.

Meanwhile, the full set of clean-up requirements would not have to be met by Baltimore until 2030.

Both cities have infrastructure that dates back to the days of bowler hats and blunderbusses, and yet one got much of the job done in about 18 years, while the other is on course for a lapse of nearly three decades.

To be sure, Boston’s water quality troubles are far from over. Conditions don’t always permit swimming there. In August 2013, just a month after that first sanctioned Charles River swim, officials were posting signs on the riverbank warning people not to swallow the water and to rinse off after contact. The cause: a massive algal bloom.

Still, conditions are improving overall on the Charles, the Boston Globe noted, reporting on that year’s algae attack. The paper said that the previous year, the river met EPA bacterial water quality standards for boating 91% of the time and for swimming 65% of the time.

That was a dramatic turnaround from 1995, when the river met swimming standards just 19% of the time.

In Baltimore, meanwhile, bacterial levels in the Harbor between 2009 and 2014 continued to show no improvement and remained unhealthy, sometimes spiking to 400 times the safe level for Enterococcus bacteria, the Environmental Integrity Project (EIP) found in a report last December. 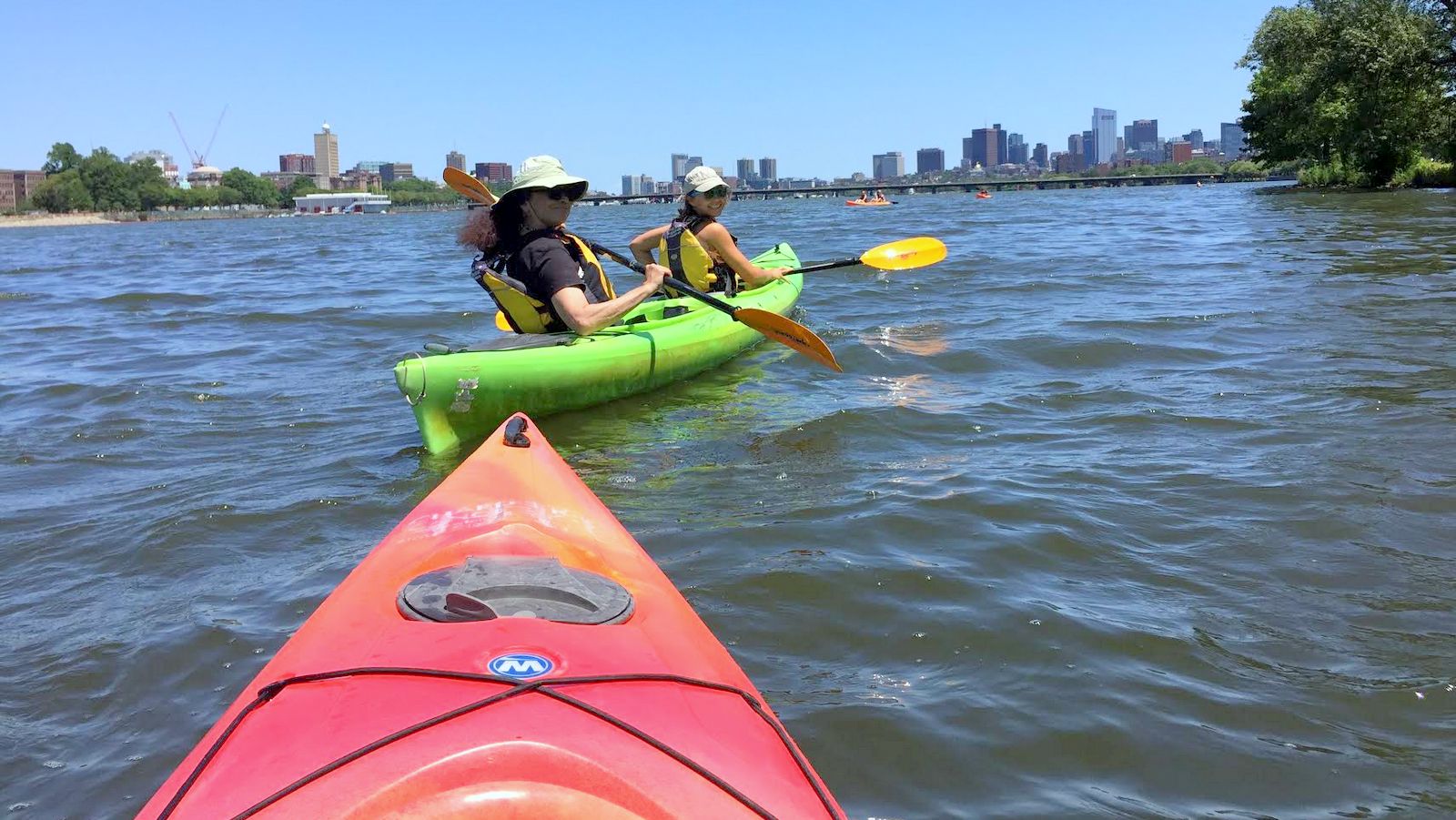 The author and niece Carly Dennis paddle a sparkling and clean-seeming Charles River last month. In the distance, the Boston skyline. (Andy Shen)

A ripe subject for debate if not a doctoral thesis, exact comparisons between the two cities are, of course, difficult, with differences in the amount of money spent and the precise fixes required for  pipes and treatment plants.

Proclaiming What Can’t Be Done

But it’s hard not to be left with the image of Bostonians bobbing happily in their urban waterway and wonder, why can’t Baltimore do this?

Among the answers EIP found for Baltimore’s failure to live up to the 2002 decree was bureaucratic delay and fingerpointing – the city and the EPA haggling over the scope of the project before it even got off the ground.

Mayor Rawlings-Blake has little patience for critics second-guessing Baltimore’s efforts, repeating that the city is doing its best to overhaul its aging infrastructure.

The same mentality pervades the city’s bureaucracy, whose mantra is that the original timeline was too ambitious for Baltimore’s abilities. “We need more time to do the work because this system is a big system,” an engineering supervisor at the Department of Public Works explained to EIP.

Which brings to mind the comment in a Boston Globe editorial about the Charles River clean-up in the year of that first sanctioned civic swim:

More about Baltimore’s sewage mess in The Brew: