Like many large cities and jurisdictions, Baltimore County has a crisis intervention team which “works with the county police to assess, triage and stabilize situations involving mental health issues.”

And yet in the clearly acute situation police encountered Monday after officers broke into Korryn Gaines’ Randallstown apartment to serve her with a warrant – they found Gaines allegedly sitting on the floor holding a shotgun, her five-year-old nearby – the crisis intervention team was never called in.

After a six-hour standoff, during which police said an at-times agitated Gaines occasionally aimed her gun at them and at one point demanded they leave or be shot, an officer fired the first shot at her.

This triggered two blasts from Gaines and then the officer returned fire with three shots, killing the 23-year-old.

Why was the crisis team never called in to try and de-escalate?

“I don’t know the answer to that question,” Baltimore County police spokeswoman Elise Armacost said last night. “I have to look into that, how that unit is dispatched. I can’t answer you right now on that.”

That question is one of many swirling as Gaines’ death comes under national scrutiny, amid the continuing controversy over the police use of lethal force against African-Americans.

“If Korryn Gaines is now dead and her son, without his mother, is shot, who exactly did the police aim to protect in that house? It was surrounded. She couldn’t leave,” wrote New York Daily News columnist Shaun King, discussing her death along with other recent high-profile police shootings, including those of Eric Garner and Tamir Rice.

“It appears that police just didn’t feel like waiting it out any longer,” he wrote. “Why not? Was her life not worth the wait?”

Responding to The Brew’s questions Tuesday, County Police Chief James Johnson defended his agency’s tactics, saying they were “concerned about the safety of the child.”

Locally, police also are being criticized – including by the American Civil Liberties Union of Maryland – for failing to end the encounter peacefully.

“It should be an explicit goal for police in every encounter that all of the people, both the police and the community that they serve and protect, survive the encounter,” the ACLU said in a statement on Gaines’ death.

“And from what we know today about the Baltimore County Police Department’s response to Ms. Gaines,” the group said, “Police failed to honor that goal, with devastating results.”

Gaines’ distraught family members also spoke out against the police handling of the encounter.

“We see hundreds of videos where these people are taken into custody without harm. What was so different in this situation?” Gaines’ aunt, Dawn McGee, told WBALTV. “If they truly felt like something was wrong, then address her accordingly.”

“The weapon was on her lap beside her. She didn’t fire until they fired on her,” aunt Shannon Gaines told the station.

Chief James Johnson has said police did use “trained negotiators” to try to get Gaines to surrender peacefully Monday. And police did consult with “mental health professionals,” during the standoff, according to Armacost.

But with many details still to be revealed, the rough outline of what happened – a SWAT team kicking down the door to serve a warrant for minor offenses and then firing the first shot – suggests Baltimore County police may not have followed current thinking on best practices in such situations.

Police agencies across the country are increasingly using special training and crisis intervention teams to help officers deal with people who may have mental health issues.

“Studies have found that the training can alter the way officers view people with mental illness,” according to a review of the issue by The New York Times.

“The approach, which teaches officers ways to defuse potentially violent encounters before force becomes necessary, is useful for officers facing any volatile situation, even if a mental health crisis is not involved,” the Times noted, citing law enforcement experts. 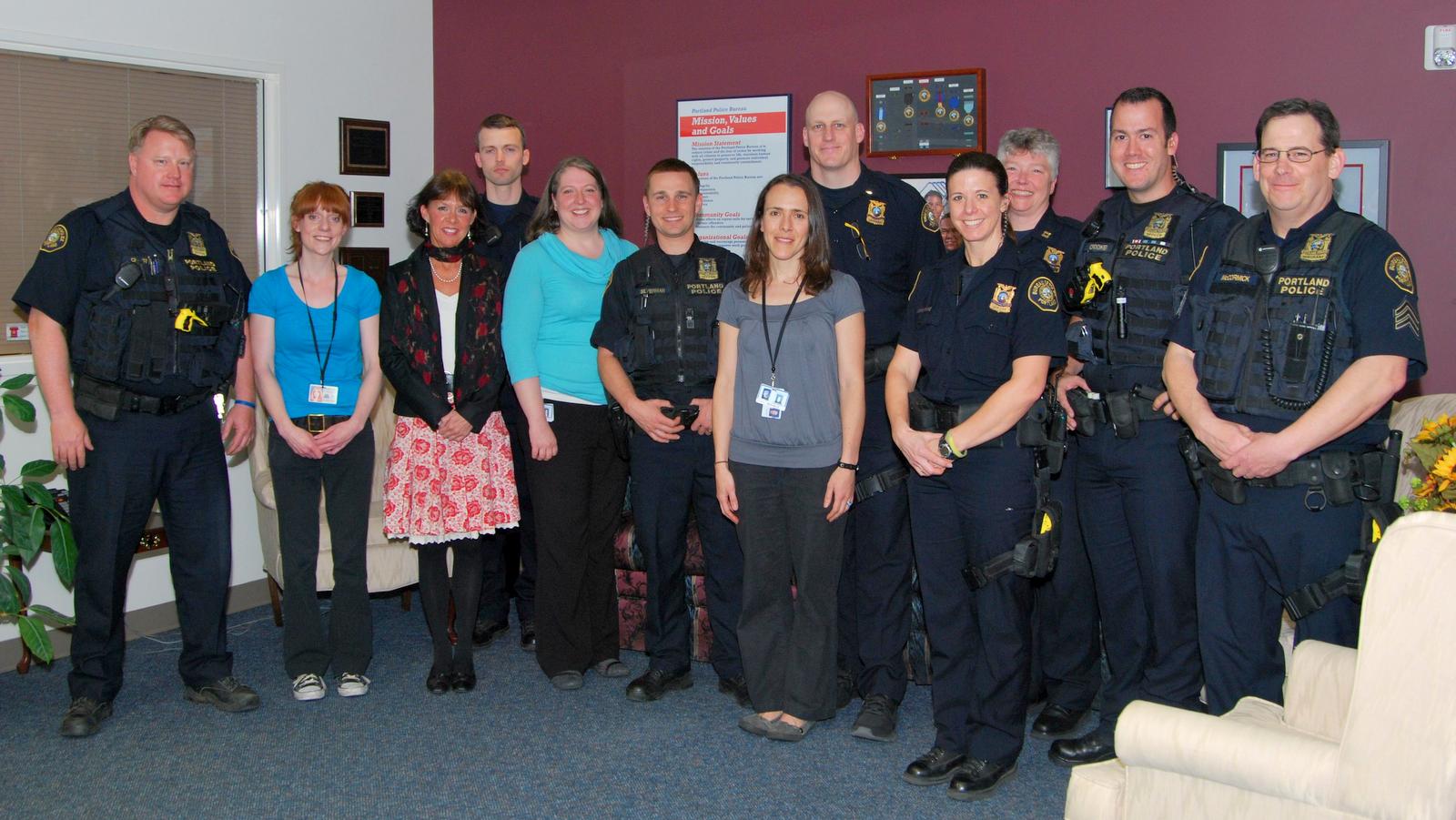 A Behavioral Health Unit, aimed at assisting in interactions with people with mental health issues and avoiding the use of lethal force, is launched by the Portland Police bureau in 2013. (portlandoregon.gov)

Under this model, experts are also made available to assist officers in many jurisdictions, including in Baltimore County according to its website – which notes that the Mobile Crisis Team “pairs a mental health clinician with a police officer to provide emergency police response to persons in need of crisis intervention.”

Armacost would not discuss Gaines’ possible mental health issues with reporters, citing privacy, but the public record and the agency’s own encounters with Gaines suggest police had good reason to anticipate that she might have some.

In a 2012 lead paint lawsuit, Gaines’ attorneys said she had “neurological impairments” as a result of childhood lead exposure. A physician’s report stated that Gaines had “a history of problems with anger and impulsive behavior.”

Gaines’ aggressive behavior during her March 10 traffic stop for not having license plates on her vehicle was another possible indication. An increasingly agitated Gaines refused to turn over her drivers’ license, challenged the officer’s authority and had to be physically removed from the car, according to the police report.

“You guys are going to take me away from here in a body bag,” she told officers in video she made of the traffic stop, which also shows her advising her five-year-old “You see what they do to us? You fight them!”

With the agency’s review of Gaines’ fatal shooting still pending, police say they will not soon be releasing the name of the officer who shot her because of threats the incident generated.

In a statement to the media, Chief Johnson said the department has “received an unprecedented number of threats against police, including threats and actions against specific officers and officials.” Their decision comes on the heels of the fatal ambush of five police officers in Dallas last month during a demonstration against police shootings.

Not just the number of threats but concern about the 23-year-old’s political affiliations played a part in the decision not to release the officer’s name. Johnson also cited “Gaines’ ideology, consistent with anti-government sentiment.”

“While Gaines does not appear to have been actively affiliated with any specific anti-government group,” Johnson wrote, “she identified and behaved as a ‘free person’ who does not recognize governmental authority.”

Narrative from the Baltimore County Police report on their March 10 traffic stop of Gaines at Pikeswood Drive and Liberty Road. 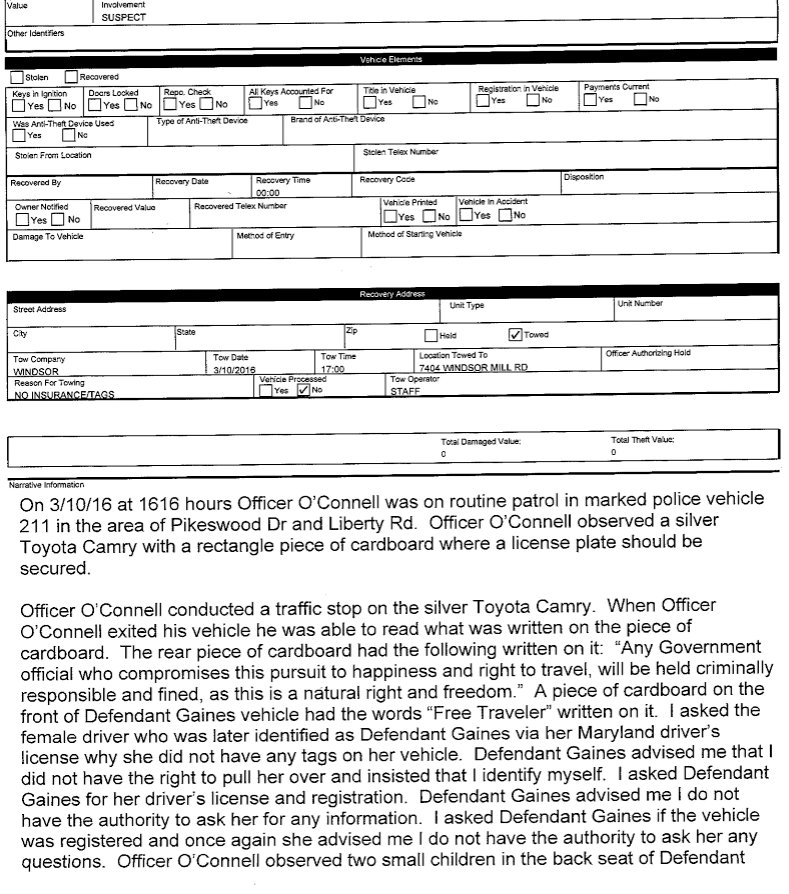 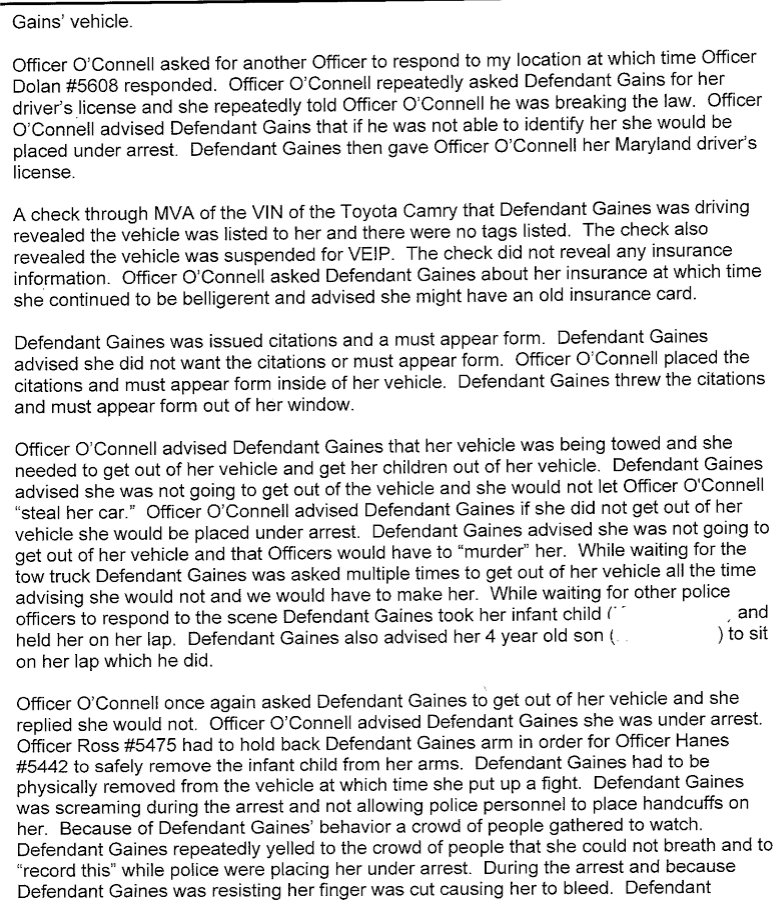 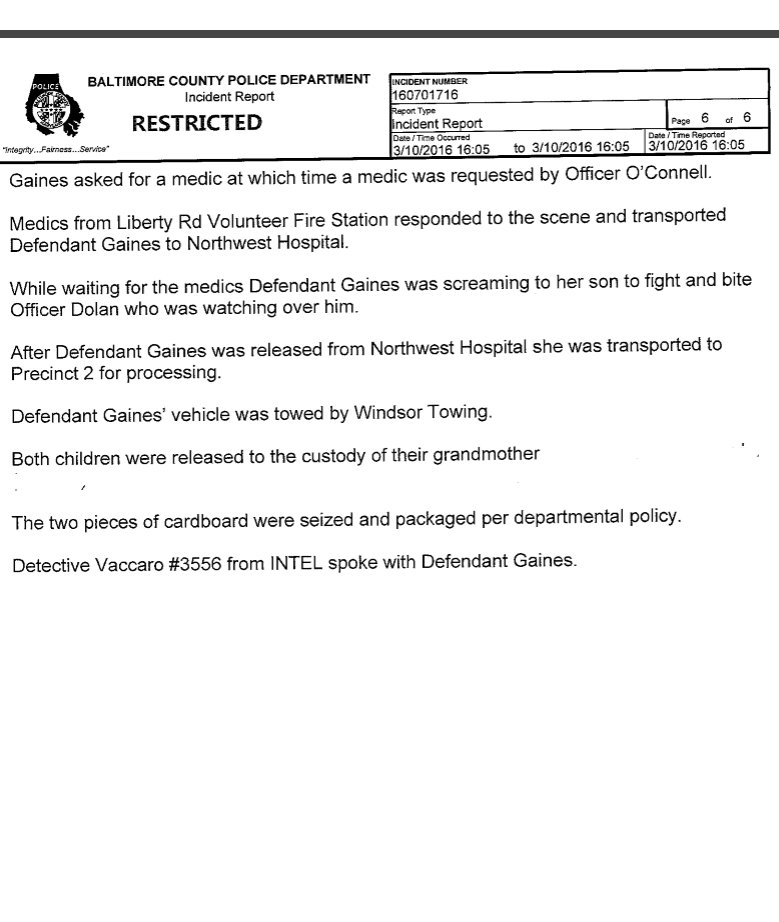