Why are Baltimore’s first protected bike lanes, “cycle tracks” as planners call them, being built in majority white areas and not in black neighborhoods?

As equity questions boil up with the imminent debut of the $700,000 Maryland Avenue cycle track (which is opening on the heels of the Roland Park cycle track), it’s worth pondering this bit of history:

There once was a bike lane in West Baltimore on Monroe Street, but after complaints from some in the community, the city removed it.

We went back to The Brew’s coverage of the debacle five years ago to recall just what happened.

Reading back over our three articles, one problem was the failure of city transportation officials to include the community in the planning for the bike lane. The other key factor was that some powerful opponents got the ear of Belinda K. Conaway, the former 7th District Councilwoman.

William Brewer, then president of the Whittier-Monroe Community Neighborhood Association, and Dr. Franklin Lance, pastor of Mt. Lebanon Baptist Church and president of the Greater Mondawmin Coordinating Council, brought their concerns to Conaway.

“It’s  a recipe for disaster,” Brewer said. He called  the bike lane a safety hazard, ill-conceived by the city and never discussed with the community.

Also clear from our reporting was this takeaway:

Many area residents liked and were already using the West Baltimore bike lane. 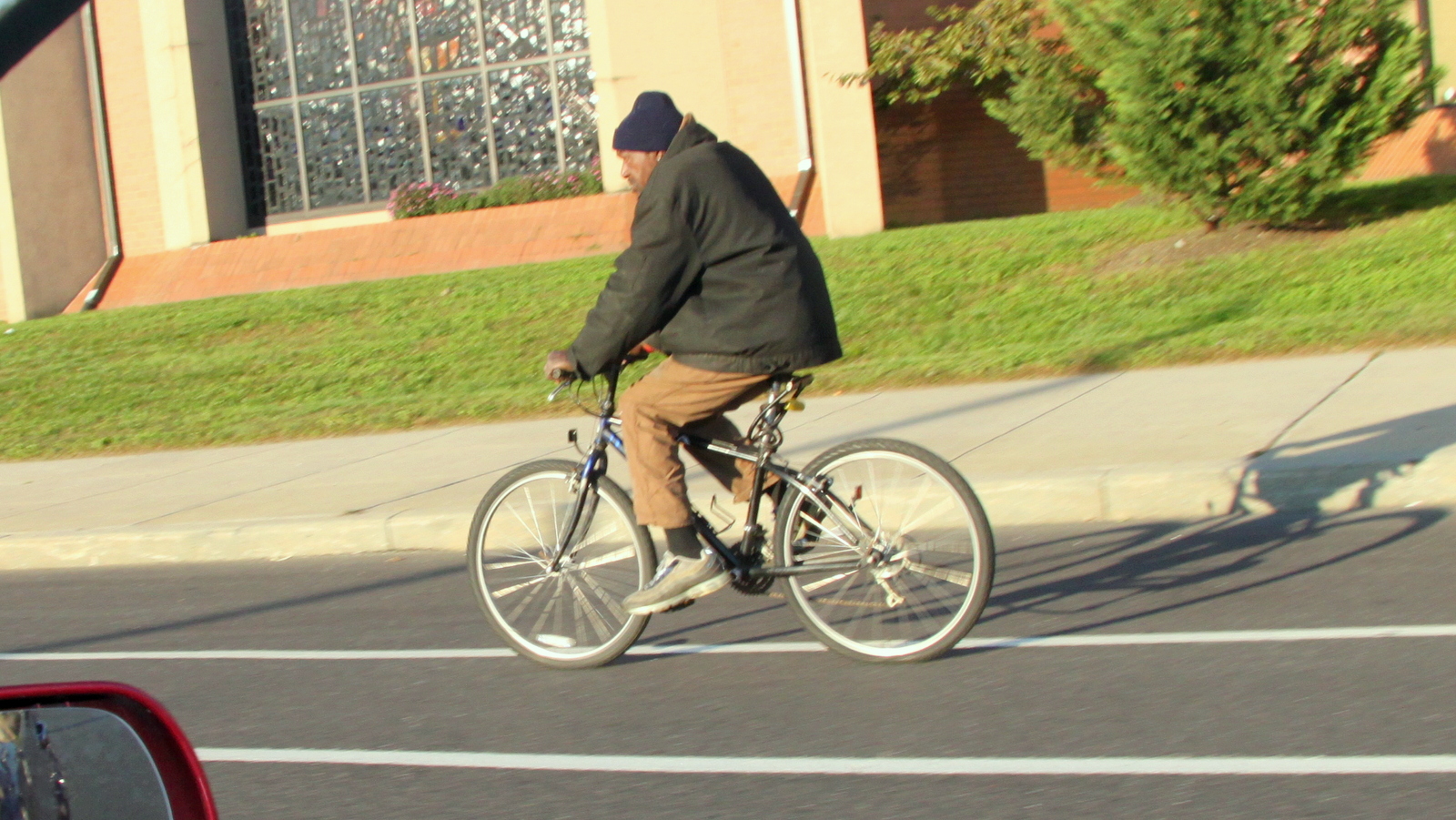 The Monroe Street bike lane under use in 2011. (Fern Shen)

Monroe is a southbound one-way street which cuts through the low-income and predominantly African-American communities below Mondawmin Mall.

The bike lane created there in May 2011 was designated with a white line and “sharrows” painted on the west side of the road. It replaced one of two vehicle traffic lanes.

(A similar bike lane was established around the same time on University Parkway and Roland Avenue. Earlier this year, a portion of that lane, between Cold Spring Lane and Northern Parkway, was converted to a state-of-the-art cycle track.)

Herman Powers, then 66, was one of the people we found on two wheels there on a crisp fall day in West Baltimore five years ago.

“These lanes give more respect for cyclists. And that’s what’s lacking now, respect and courtesy, between cars and cyclists,” Powers said.

Powers said he lived around the corner on North Avenue and used the bike lane several times a day. 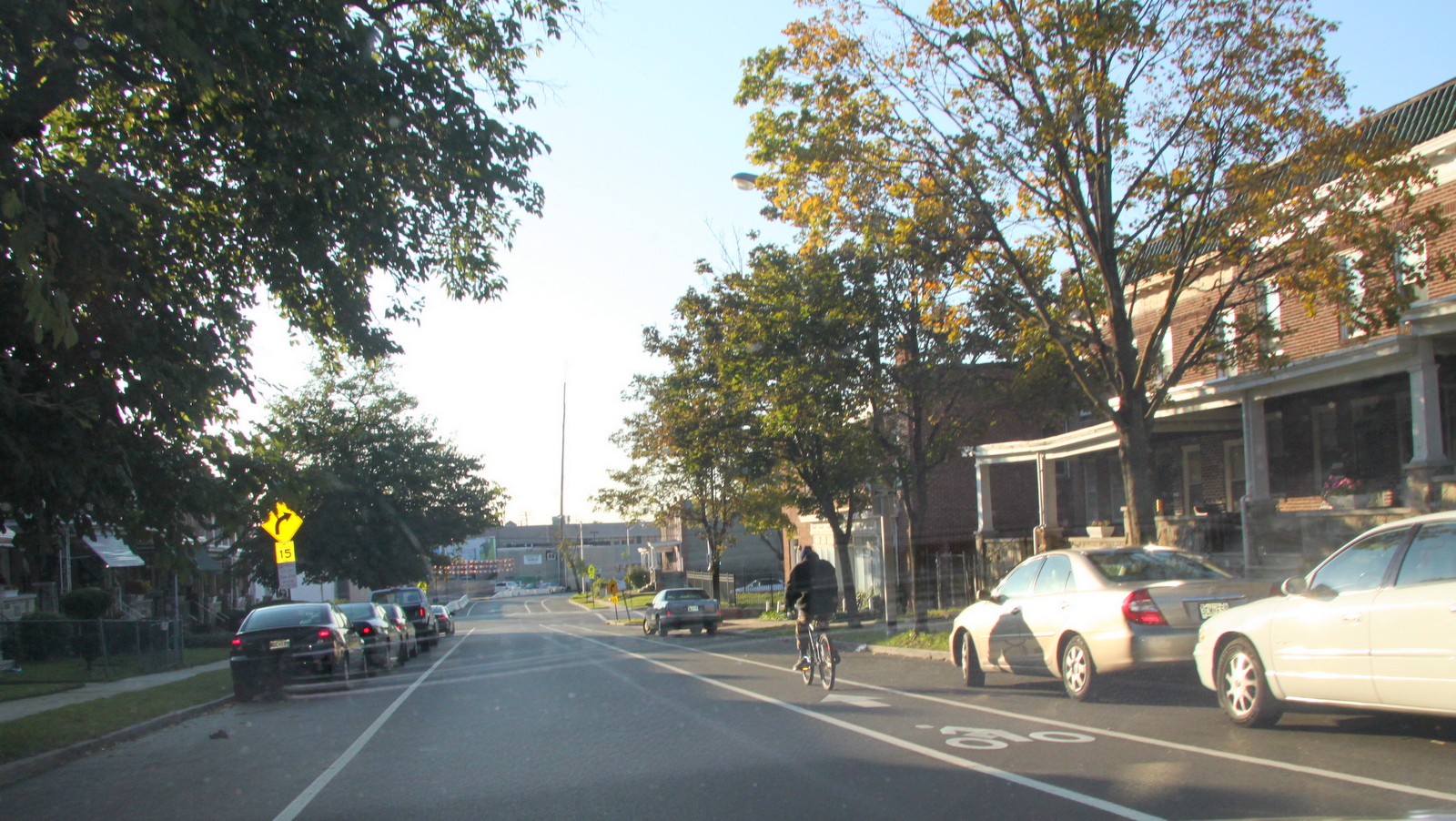 Another bike rider, Robert Wynder, said he was commuting back home to Bentalou Street from his workplace off 41st Street near I-83.

Wynder, who had begun cycling for health reasons over the summer, said he was using the Monroe Street lane regularly. He had just one question, “Why does it stop?”

Like many bike riders we spoke with, Wynder wondered why the lane terminated below North Avenue, returning Monroe Street at that point to two lanes of vehicle traffic.

That made riding there “hairy,” he said.

These days, it’s a moot question. The entire roadway has been returned to a car-dominated one-way street for motor vehicles.

As we explain in these stories, Baltimore DOT scraped off the stripes and sharrows five months after laying them down.

There had been 11th-hour attempts by bike advocates to engage the community in discussions about salvaging the bike lane or finding alternate routes, but these ended in fruitless finger-pointing.

The city canceled a planned meeting, and Pastor Lance confirmed that he had refused to attend if keeping Monroe Street’s bike lane was still on the table.

Meanwhile, how did residents who lived along Monroe Street feel? We found reaction there mixed, but several, like Marsha Franklin, wished the city wasn’t taking the lane away.

“We had a lot of accidents before they put in the lane. Just this year, three children on bicycles got hit by cars. And one adult. A couple of these were hit-and-runs,” she said, adding:

What Happened to Monroe Street’s Bike Lane? Brew Coverage in 2011: