In her successful run for mayor in 2007, Sheila Dixon raised $1.92 million, according to her fundraiser Rachel Rice.

In her attempt to regain City Hall as a write-in candidate last Tuesday, Dixon secured a shade over $10,000, according to her last pre-election campaign report.

Meanwhile, the person who narrowly beat her in the Democratic primary was sitting on a pile of cash, spending relatively little of it.

State Sen. Catherine E. Pugh reported a cash balance of $429,086.02 coming into the final stretch of the general election on Tuesday. That amount remained after she had plunked down $23,000 on TV ads in October, mostly, it seems, to remind residents that they were voting for a new mayor on Tuesday.

Pugh forked out another $75,000 in direct mailings, according to her pre-election report. Totaling up these and various miscellaneous costs, such as $228 for “thank-you flowers,” Pugh spent about $100,000 through October. (Additional expenses closer to election day won’t be disclosed until the end of November.)

Dixon’s last minute write-in campaign, announced on October 11, operated on a shoestring. Prior to her announcement, the former mayor had just $4,480 in her election kitty. After that, she got two big donations.

National Materials, a company owned by “Demolition King” Pless B. Jones, gave $4,000 to Dixon on October 18. On the same day, M&A Infrastructure Solutions chipped in another $4,000.

M&A’s address is listed as the Baltimore County home of Tejpal S. Ahuja. Chief of water engineering when Dixon was mayor, Ahuja now runs DME Consulting, a minority-certified valve and water-main design firm that does work for the Department of Public Works.

Dixon ran a spirited volunteer campaign that presumably won her nearly all of the 49,000 write-in votes recorded on Tuesday. (The city elections board has not yet separated out the names of the write-ins.)

Adding Dixon’s presumed votes to those cast for Alan Walden, the Republican Party’s mayoral candidate, and Joshua Harris, the Green Party candidate, the total vote count not going to Pugh amounted to 43%.

Since registered Democrats outnumber Republicans by 20-1 and Greens even more, Pugh’s victory can be seen as a less-than-overwhelming mandate to govern for the next four years:

(NOTE: Absentee ballots are being counted today by the elections board.)

But in terms of money, Pugh’s advantage in the election was overwhelming. In the eyes of developers, contractors and consultants, she became mayor months ago.

The cash flowed accordingly. The $255,166 Pugh raised in private contributions between late August and late October compares to $15,248 raised by Harris and just $965 by Walden.

Harris picked up nearly as many individual contributors as Pugh did during this period. The big difference was in the amounts given.

The average donation to Harris was about $50. The vast majority came from individuals, not companies.

More specifically, Baltimore’s new mayor got a financial boost from a September 27 fundraiser by Thomas Bozzuto, a waterfront developer, and from $9,000 by Gannett Fleming and its top management, an “on call” water consultant for the Department of Public Works.

Other players could be seen shifting their allegiance to Pugh after supporting Dixon in the primary.

Prominently among them: more members of the Paterakis family ($6,000 from Venice Paterakis, the legal maximum in Maryland, and $6,000 from her son, F.G. Smith). Also $3,000 from M. Luis Construction, currently the city’s biggest street paver who held a well-attended fundraiser for Dixon last January.

Or in the case of several former aides of outgoing Mayor Stephanie Rawlings-Blake, you can find money finding its way to Pugh.

For example, Sharon Pinder. The ex-minority business development chief at City Hall tapped her next-door neighbor to become a $60,500-a-year consultant (they both live in Howard County).

Pinder left city government early last year, as did the neighbor, whose consulting contract was quickly terminated. Will her $1,000 contribution to Pugh in late September augur a future city job?

Then there is the case of “Demolition King” Jones, who has had a lock on the city’s emergency demolition contracts for over a decade.

Jones hired Dixon as marketing director of his Maryland Minority Contractors Association after she was forced to resign as mayor in 2010 after a corruption conviction. (That job continues to be Dixon’s steady paycheck, along with a city pension.) 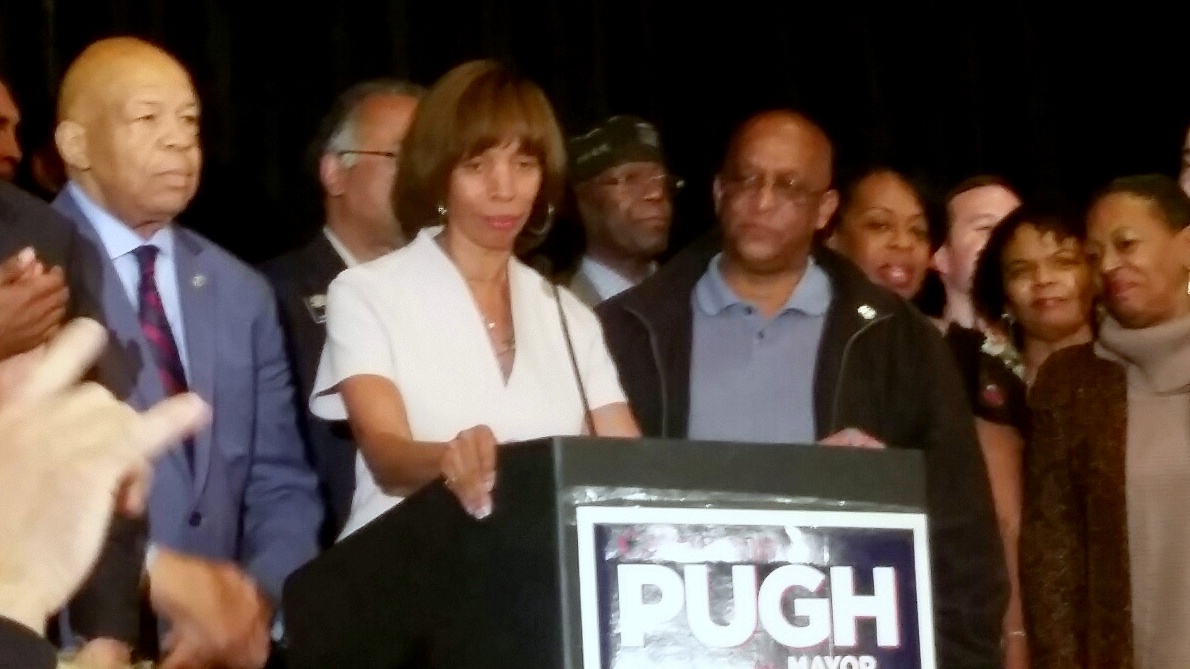