Time to send in the Feds?

Mayor Catherine Pugh disclosed today that she’s been in talks with the FBI about ways to a stage a federal intervention to reduce violence in Baltimore, which is on pace to reach the highest homicide level in two decades.

“I am expecting some response in reference to some requests that we made. We should probably know by the end of next week about the additional help we are asking for,” she said at her weekly press availability.

She declined to go into specifics except to say that “we do believe we need more people on the street.”

“In terms of technology,” she continued, “we have done some things as relates to, since Freddie Gray, body cameras on police officers. But we are trying to implement some new technology. We understand that there is some more technology out there that the city has not had access to. So we’ve made some requests. Again, I should know more sometime next week.”

Even with the help of G-Men, violence in Baltimore won’t stop until there is a cultural change, according to Pugh.

“This is not just something they [law officials] can stop because they have a gun in their hand. . . This is a community problem. This is relationship problems. We’re trying to wrap our arms around all of these issues, including drug addiction.

“When I walk up and down certain streets in our city, it’s like a march to nowhere. You see the drugs on our streets. You see the people who are drug addicted. There are more drug overdoses in our city than ever before. The governor has declared a statement of emergency. This is not just Baltimore’s problem. This is a problem statewide. It’s a problem nationwide.”

The FBI already assists the police department in areas pertaining to its mission, which includes investigating violent crime as well as drug trafficking, terrorism, public corruption and civil rights violations.

Shortly after the April 2015 riots spurred by the police-in-custody death of Freddie Gray, a special “war room” was set up at police headquarters by Commissioner Davis and then-Mayor Stephanie Rawlings-Blake.

The war room gathered a large cast of federal law enforcement personnel – including from the FBI, Drug Enforcement Administration, Bureau of Alcohol, Tobacco, Firearms and Explosives, and the U.S. Marshals Service – to help city police fight a spurt in violent crime and homicides.

Until two months ago, the war room was commanded by Lt. Col. Sean Miller, who was demoted after seven officers in his gun task force were charged with federal racketeering, including shakedowns of Baltimore citizens, home burglaries, false arrests and filing fraudulent overtime claims.

Despite the war room’s presence and many administrative changes instituted by Davis, violent crime has continued to climb. 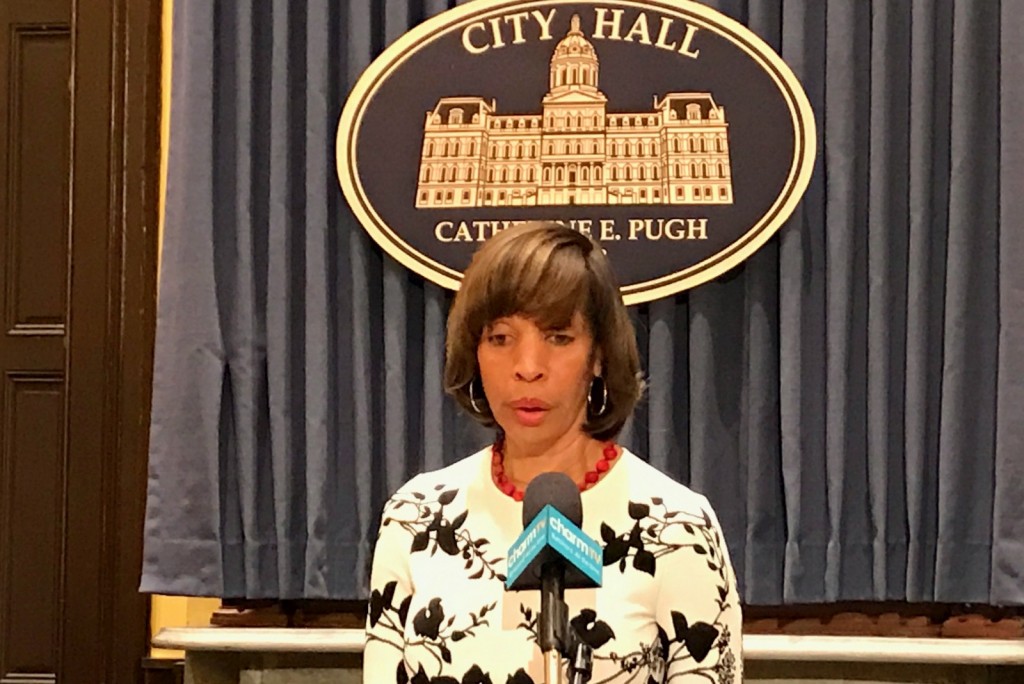 On Monday, Baltimore passed a grim marker of the 100th reported homicide in 2017, a level of violence not matched since the 1990s.

“We need to get the murder rate down,” Mayor Pugh said today, echoing the lamentations of other elected officials as the carnage grows.

On the same day, Councilman Brandon M. Scott, chairman of the Public Safety Committee, called for the creation of a 20-member citizens advisory commission to advise the police department on public safety.

Nearly all members of the Council signed on as supporters of the measure.

Gordon B. Johnson, the special agent at the Baltimore Field Office, did not attend today’s press availability. His office has not responded to a request for comment about the mayor’s statement.

Anthony McCarthy, the mayor’s spokesman, also declined to discuss the mayor’s conversation with the FBI except to say that it was “very positive.”

Pressed about Pugh’s crime-fighting strategy, McCarthy said that she is “very much committed to the idea we have to do something differently.” He noted that she talks to mayors around the country daily “about what they’re doing, not just with crime, but about renewable energy, about young people and recreation” in order to get the best advice possible.

Asked if she believes that Davis is up to the task of reducing crime this summer, a time when street violence traditionally spikes, McCarthy said, “She has complete confidence in our police commissioner.”