Mayor Catherine Pugh today announced that she will follow the recommendations of a year-old task force on how to handle Confederate monuments in Baltimore by appointing a new task force that will “provide a public time line for removal of the monuments.”

Reacting to a protest march and calls by a councilman to “destroy” the city’s four monuments following the neo-Nazi violence in Charlottesville, Va., Pugh said, “It is my intention to move forward with the removal of Baltimore City’s Confederate statues.”

In her statement, she blamed ex-mayor Stephanie Rawlings-Blake for not acting on the matter more quickly, saying, “I have read the recommendations of the task force set up by the previous administration, which were reported in January 2016 and provided to the public in writing in August of 2016.” 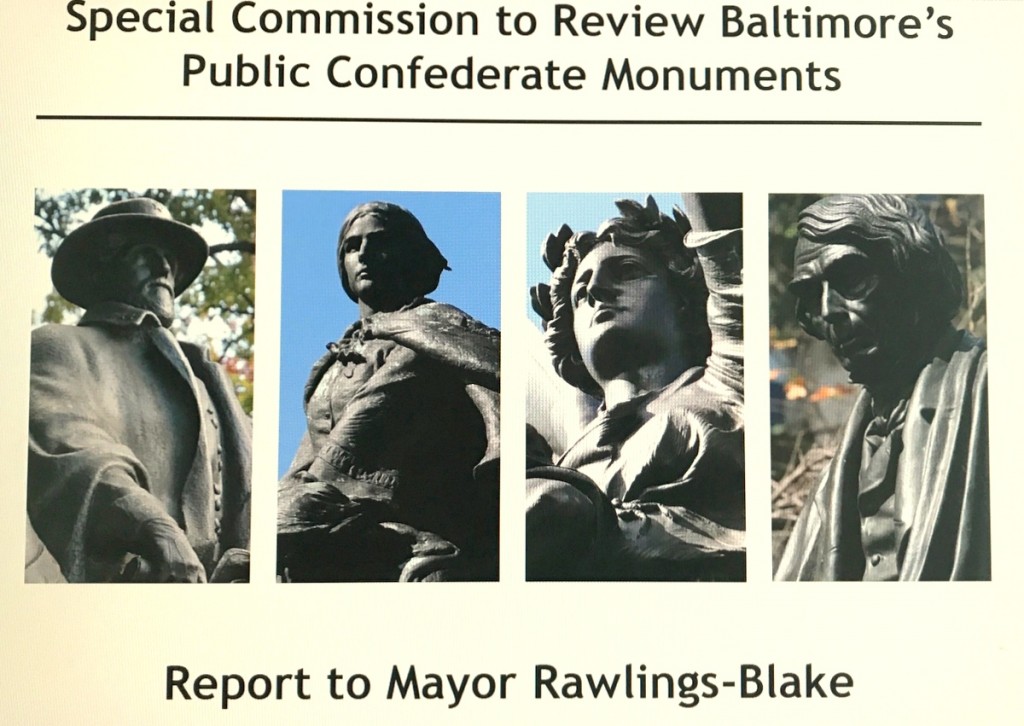 That report recommended deaccessioning and removing the Lee and Jackson Monument across Wyman Park Drive from the Baltimore Museum of Art and the Roger B. Taney Monument in Mount Vernon Place.

Retaining but “recontextualizing” the Confederate Soldiers and Sailors Monument on Mt. Royal Avenue and the Confederate Women’s Monument at University Parkway and Charles Street was completed by the Rawlings-Blake administration before Pugh became mayor last December.

“I am calling for the immediate destruction, not removal, of all of these monuments,” he said this afternoon.

“We shouldn’t even be having this discussion about removing them because the last time I checked, the Civil War is over. We won. We won. So why are we honoring them?”

Scott said he would introduction a resolution to this effect at tonight’s Council meeting.

Pugh: This will Take Time

Noting that “it is my understanding that to-date none of the recommendations to remove the Lee-Jackson and Taney monuments have been implemented,” Pugh said she will form what she described as both a task force and a working group to handle the matter.

Pugh identified its members as staff from the Commission for Historical and Architectural Preservation (CHAP), Baltimore Office of Promotion and the Arts (BOPA), the historic properties program coordinator at the Department of General Services, and “two members of the private sector to help us with the fundraising.”

Before the Lee-Jackson and Taney monuments can be removed, however, a number of steps need to be taken, according to the mayor.

They include “identifying legal requirements for deaccession, negotiating and executing agreements with potential recipients, procuring funding, and receiving approval from the Maryland Historical Trust Easement Committee for removing the Lee-Jackson Monument.”

She said that she recently met with with Mayor Mitch Landrieu of New Orleans and was told that its spent $1 million to physically remove its four Confederate status – plus another $1.1 million in police overtime and storage costs.

Pugh said she has requested several construction firms to “examine the process for removal of the monuments and provide the city with a proposal for removal.”

“We will inquire as to their willingness to accept the monuments and prepare agreements for the transfer,” Pugh promised.

–Fern Shen contributed to this story.