“We’ve been waiting for the baton to be passed for too long – now we’re going to take it,” the 33-year-old Scott said at yesterday’s event in Clifton Park. “It’s our time.”

As the crowd cheered, the whir of a drone hovering overhead caused people to look up and one man to crack: “That’s probably McFadden!” 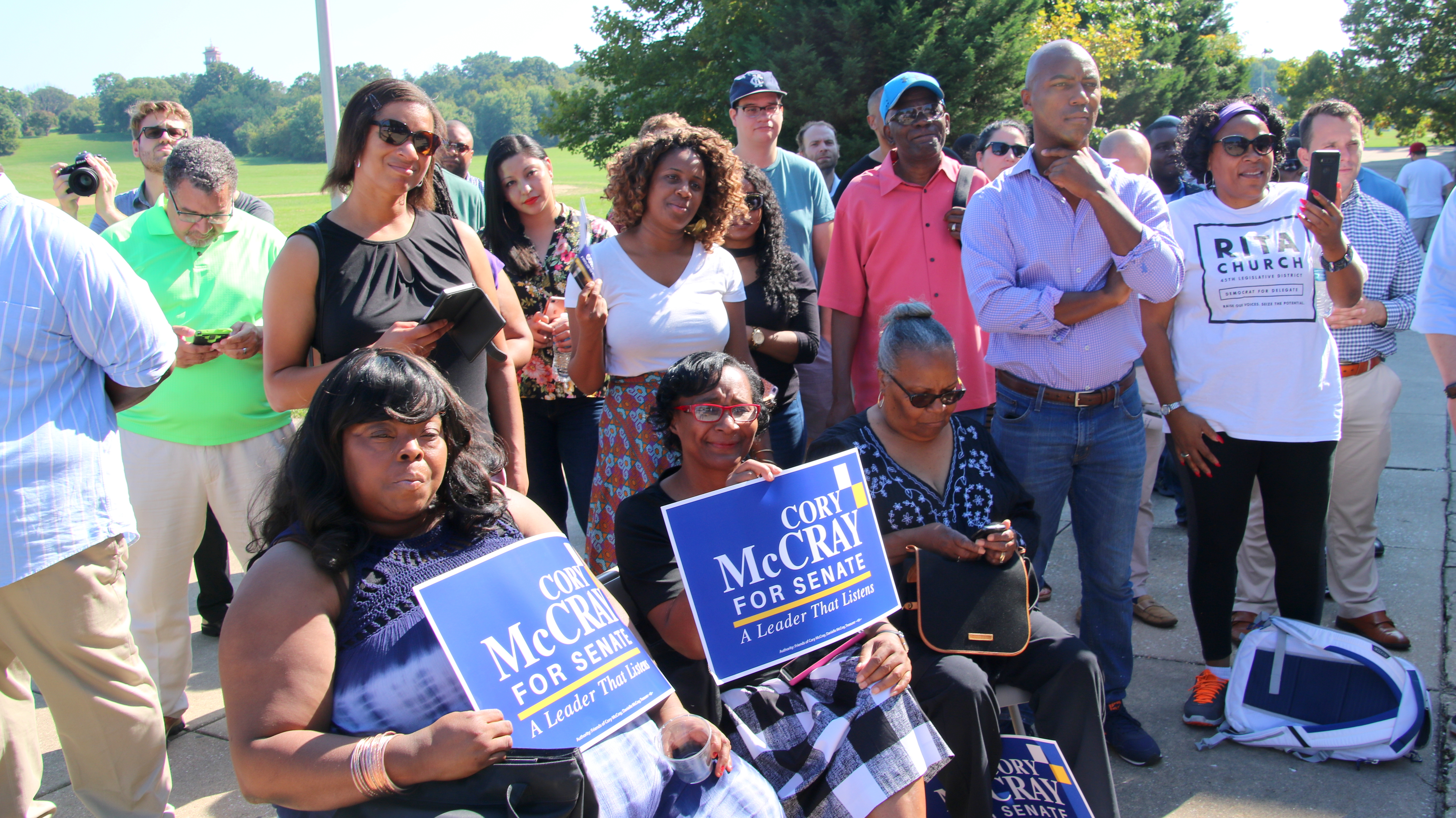 The crowd outside Harbor City High School (the former Fairmount-Harford High School) for the kickoff of Del. Cory McCray’s Senate campaign. Among them, at right in the lavender shirt, was Kelly Cross, a candidate in last year’s city council election who sought the 12th district seat that ultimately went to Robert Stokes Sr. (Fern Shen)

The unseen presence of Sen. Nathaniel J. McFadden – the 45th District incumbent McCray hopes to topple – hovered likewise over the crowd, providing a sober counterpoint to the speakers’ optimism.

After 35 years in elected office, leading up to his current Senate president pro tem position near the top of the Annapolis pecking order, the 71-year-old McFadden has powerful allies.

Taking him on in a state where Democratic leaders maintain tight control on the levers of power and look askance at those who “jump the line” could be perilous, McCray acknowledged.

“I know the risk today but I tell you, I will make it worth it,” he said, after thanking by name the politicians who stood with him.

McCray is only the latest upstart challenging an incumbent in next year’s Democratic primary.

Attempting an even bigger leap is SEIU union leader Aletheia McCaskill, who is taking on Sen. Shirley Nathan-Pulliam in the 44th district.

“Don’t just listen to me. Walk with me. Support me. I need you to pray that good prayer,” McCaskill, chair of SEIU’s REGIONAL C.O.P.E., said at her announcement event earlier this month. 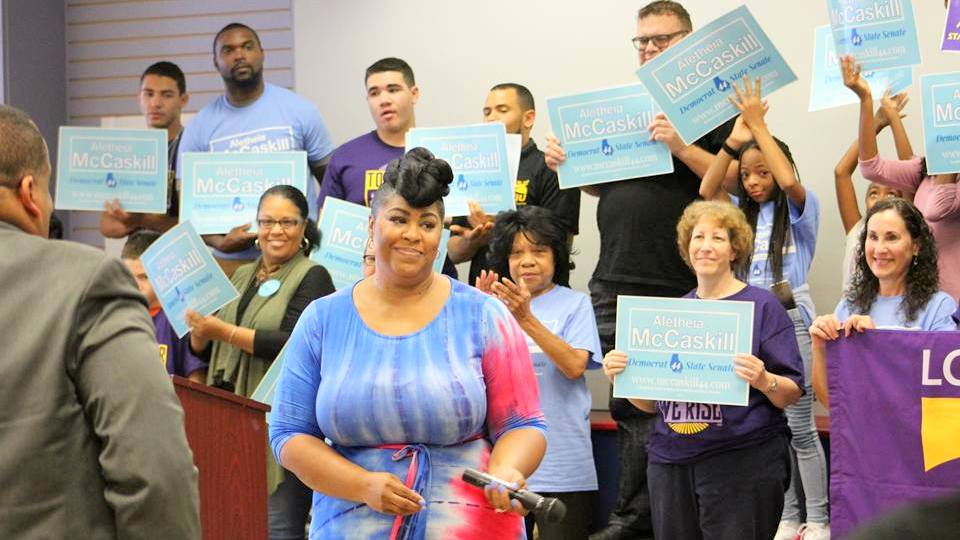 In addition to financial support from her union base, McCaskill may have another resource to draw on in the match-up – voters unfamiliar with the incumbent in the recently redistricted 44th, which now includes voters from Baltimore County.

The owner of a daycare business, McCaskill was an active street team organizer in the last election, motivated in part by her commitment to Baltimore passing a $15 minimum wage bill.

Also squaring up against an entrenched officeholder in the June 26 primary is Del. Antonio Hayes, who is vying for Sen. Barbara Robinson’s 40th district seat.

Likewise Del. Mary Washington is taking on a fierce opponent in Sen. Joan Carter Conway. Conway, representing the 43rd district, has served in the Senate since 1996 and chairs the Senate Education, Health and Environmental Affairs Committee.

One Senate seat being closely watched is the 41st district, where the incumbent senator, Nathaniel T. Oaks, is currently facing federal indictment. Oaks has pleaded not guilty to nine counts in connection with allegations that he was recorded by the FBI accepting $15,000 in cash to use his position to help a development project.

No one has yet filed or announced plans to run against him.

“My Story is Baltimore’s Story”

Speaking in the hot sun outside his former high school, McCray yesterday spoke of his accomplishments, everything from troubleshooting potholes and busted streetlights to successfully pushing legislation that allows felons to regain the right to vote after they leave prison. (He and the measure’s allies successfully overturned a veto by Gov. Larry Hogan.)

But mostly, through a story he will likely re-tell many times on the stump, McCray portrayed himself as an unlikely success story with a personal connection to the city’s struggles.

“As a juvenile, I was charged for a crime as an adult. I would spend my 18th birthday at Baltimore City jail,” he said.

“Each and every week it was my mother who would visit me when I was away [in prison] in Western Maryland,” he said, explaining that he grew increasingly discouraged. “I conceded to the fact that I was a failure. That I couldn’t be cured and that trouble would never leave me.” 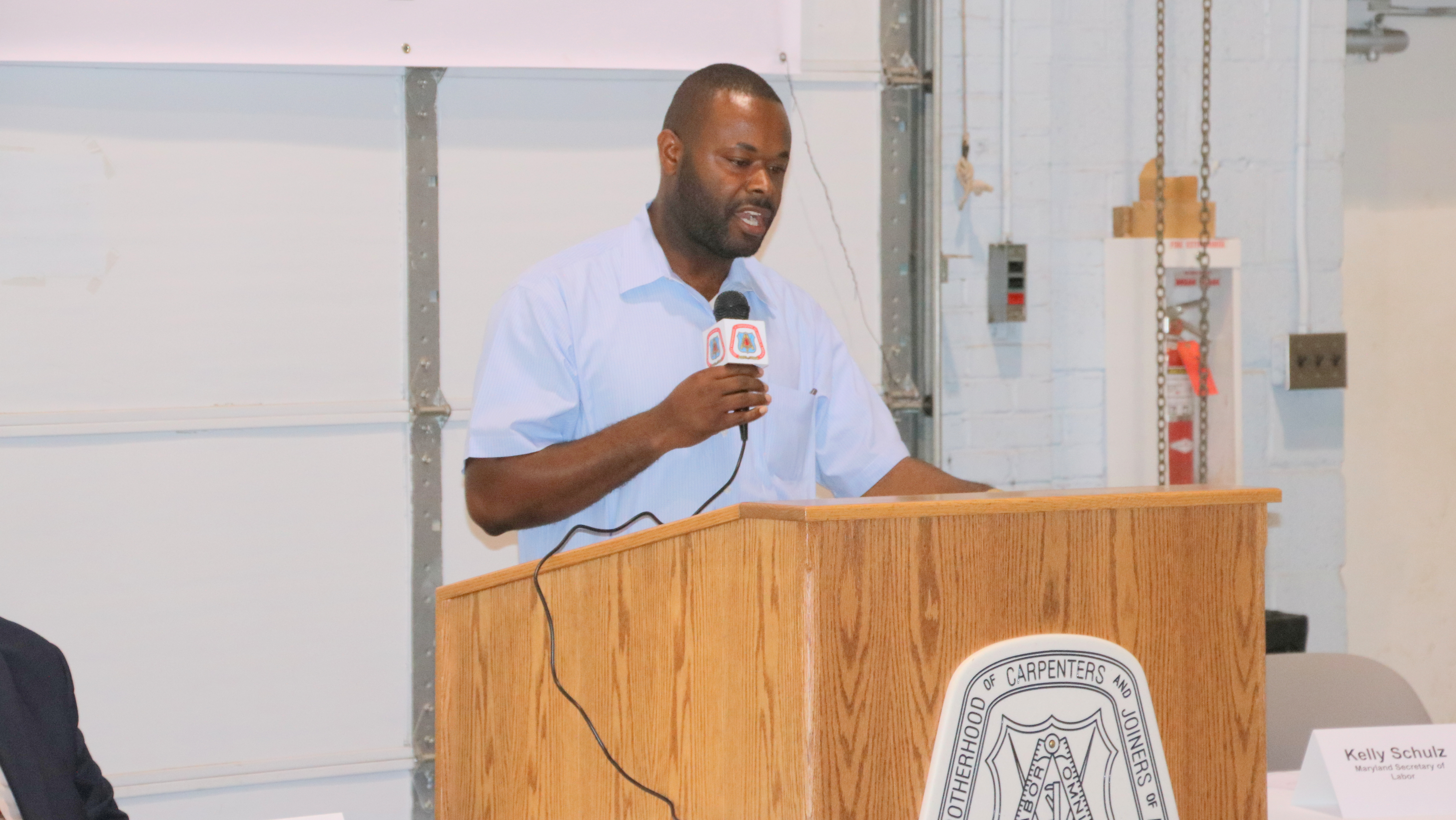 But with support from his mother and a union apprenticeship, he said, he got on a path that led to him becoming a licensed electrician, an entrepreneur, a married father of four and a member of the Maryland House of Delegates.

“It was my mom who looked me straight in the eye . . . and said ‘I’m always going to believe in you until you believe in yourself,’” he said.