Maryland’s limits for emissions of the ozone-producing substance NOx, which are out of compliance with federal rules, are getting a makeover. The state recently drafted new rules for power plants that would require lower emissions.

But NOx or nitrogen oxide, which contributes to the formation of health-harming smog, is a deep concern for many in Baltimore, where experts say 12% of adults have asthma.

Yesterday a City Council committee unanimously approved a resolution calling for the state to lower the limit on these emissions further still.

The packed hearing was hostile territory for a representative of the company that runs Baltimore’s biggest NOx producer, the BRESCO incinerator located near Interstate 95 and Russell Street.

“As regulations change, we continue to meet them,” said Mike Dougherty, marketing manager for Wheelabrator Technologies. 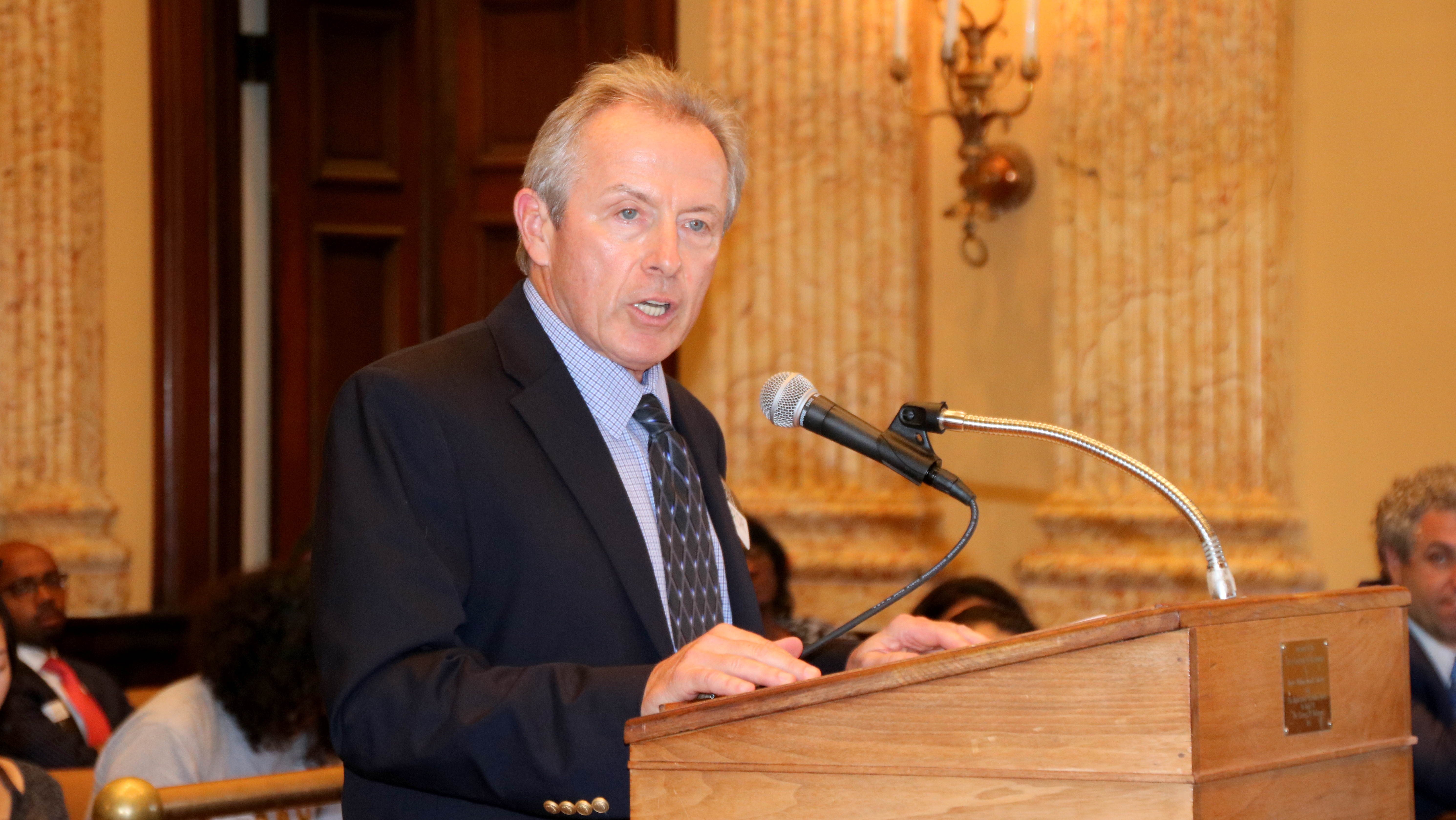 Pressed to explain why the company could not do better than comply with the new regulations, Dougherty had little response other than to reiterate his prepared remarks.

He was there to support an earlier version of the bill that simply endorsed the state’s proposed 150 ppm (parts per million) limit. He did not support the Council measure, amended yesterday, to call for MDE to lower the limit to 45 ppm.

“Is it money? Is that why you are on such a gradual schedule?” asked Councilwoman Mary Pat Clarke, co-sponsor, with Councilman Ed Reisinger, of Council Bill 17-0034R.

“The city has changed in many ways and one of the ways is, we can’t live with this environment and atmosphere anymore,” Clarke said. “The regulations from the old days aren’t holding you hostage. . . We need you to go real low, real fast.”

Her remarks drew applause and cheers from the crowd, which included environmental groups and residents of South Baltimore communities near the plant, whose tall white smokestack is a local landmark.

Westport resident James Alston, who lives less than a half mile from the BRESCO facility, said he would have opposed its construction three decades ago “if I knew then what I know now.”

Alston said the trash-to-energy power plant “carelessly exceeded NOx emissions limits with no real notification to the community” and may have cost the lives of “community elders.”

Baltimore needs to move towards more accountability for BRESCO and a Zero Waste policy, Alston said, “and if that means dismantling BRESCO, so be it.”

The other facility is the Montgomery County Resource Recovery Facility, in Dickerson, operated by Covanta.

At an MDE meeting last January, a BRESCO representative said that NOx emissions could be reduced to 170 pp, but that more significant reductions would cost too much.

Yesterday Dougherty said his company would comply with the proposed 150 ppm limit and would then reduce emissions to 145 ppm by May 2020.

He said the plant currently releases about 205 ppm of NOx. Complying with the new rules would cost the company $1.6 million over the first three years and $400,000 annually after that.

Experts testifying before the committee said BRESCO is Baltimore’s biggest ozone producer and that reductions there would have a significant positive impact on health.

Michael Ewall, of the Energy Justice Network, said that 60% of the city’s NOx emissions come from the power plant. Leah Kelly, of the Environmental Integrity Project, said the plant was the fifth largest NOx emitter in Maryland last year. 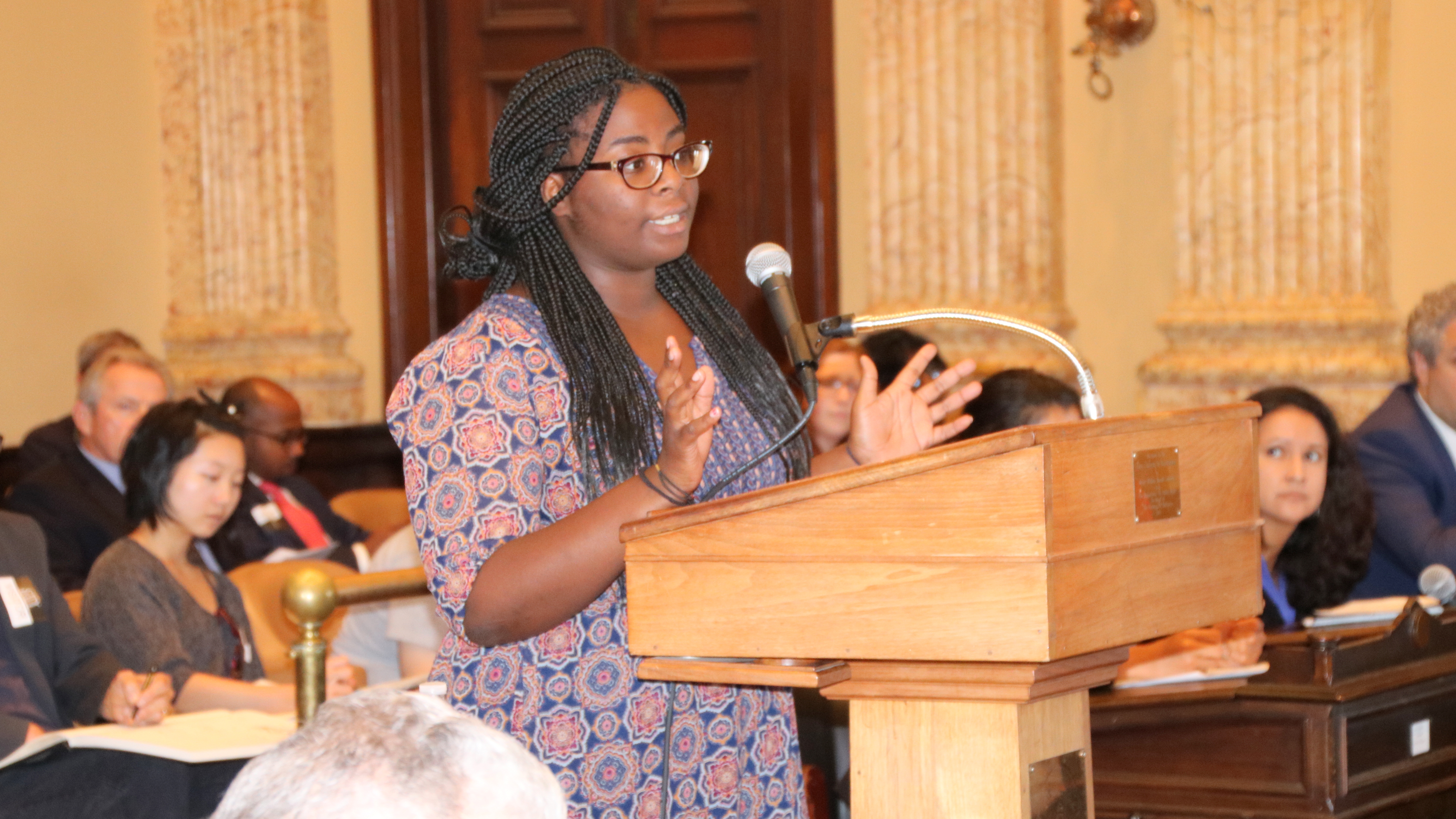 “Our communities in Baltimore are treated like dumping grounds,” said Curtis Bay’s Destiny Watford, calling on Maryland to draft tighter rules on NOx emission from the BRESCO incinerator. (Fern Shen)

Baltimore has an “extremely high” rate of asthma and other diseases whose symptoms are worsened by smoggy air, said Jeff Amoros, legislative director for the Baltimore Health Department.

“About 12% of Baltimore City adults have asthma, which is 4 points higher than the statewide average,” Amoros said. “And one in five children have asthma – double the national average.”

Others noted the impact emissions have on children and the elderly in the low-income, predominately black neighborhoods closest to BRESCO.

“If that’s not the definition of environmental racism, I don’t know what is,” said City Councilman Ryan Dorsey.

Clarke: “Do what Montgomery Did”

According to the Maryland Department of the Environment, the proposed 150 ppm limit (on a 24-hour average) would reduce BRESCO’s annual NOx emissions by 200 tons and bring Maryland in line with rules in Connecticut and New Jersey.

She noted that a incinerator built new today would have to meet a limit of 45 ppm (on a 24-hour average).

The Montgomery County incinerator – newer than Baltimore’s and equipped with better pollution controls – will be subject to a 105 ppm limit (on a 30-day basis) under MDE’s proposed rules.

On the other hand, BRESCO would still be emitting 900 tons of NOx a year – or more than twice what the Montgomery County plant emits annually under MDE’s proposed rules.

Clarke pointed out that the Montgomery County plant’s NOx emissions already represent a significant reduction – they were halved in recent years as a result of new pollution control technology.

“Why can’t BRESCO do what Montgomery County did?” she asked Dougherty.

Reisinger: “This is very Unprofessional”

Pressing him further on this point was Reisinger, who represents the district where BRESCO is located.

“Why can’t Wheelabrator make a commitment that they will re-engineer the plant?” he asked. When he questioned whether BRESCO received renewable tax credits, Reisinger exploded.

“I’m not a happy camper here that they sent someone who can’t answer questions,” he fumed. “I think it’s very unprofessional.”