Spiniello Companies has a lock on Baltimore’s sewer contracts. They’ve been awarded more than $100 million since 2010, most notably on “urgent need” contracts where sewers are breaking and the Department of Public Works has neither the time nor inclination to seek out competitive bids.

The Livington, N.J., company apparently has another lock on the city – the ability to win lucrative settlements on completed contracts through aggressive lawyering.

A year ago, the contractor secured $518,000 extra by invoking the Variation in Estimated Quantities (VEQ) clause in a sewer contract.

Here was an unusual case of a cost underrun on a municipal contract – a virtue for which the city was repaid by being forced to fork out more than twice the original unit cost for cured-in-place pipe (roughly $83 per linear foot compared to $36 per linear foot) because Spiniello held a lawsuit over its head.

Which takes us to today’s Board of Estimates meeting.

Later this morning, Mayor Catherine Pugh and two other elected officials – Comptroller Joan Pratt and City Council President Bernard C. “Jack” Young – will be asked to approve millions of dollars to Spiniello to “resolve all disputes related to the contractor’s request for excess funds” for its repair of the Mulberry Street and Cathedral Street sewer breaks.
______________________________
UPDATE: By a 4-1 margin, BOE approved the Spiniello settlement. Voting “yes” – Pugh, Pratt, City Solicitor Andre Davis and Dale Thompson (subbing for DPW director Rudy Chow). Voting no – Young. No explanations were given for the votes during a meeting that lasted under three minutes.
_______________________________

The Brew wrote in detail about the sinkhole that swallowed up a block of West Mulberry Street on July 4, 2016, followed by a cave-in under Cathedral Street next to Mt. Vernon Place.

In both cases, the city invoked Article VI, Section II of the charter and directed DPW Director Rudy Chow to ask Spiniello to fix the sinkholes as emergency non-bid procurement contracts.

At its meeting on March 1, 2017, the spending board awarded $8.5 million to Spiniello to pay for the sinkhole repairs. By that time, the work was nearly complete.

The underground line at Mulberry Street was finished, with only street paving and sidewalk restoration needed, and the new sewage chamber beneath Cathedral Street was about to be sealed.

The contractor was about to remove the above-ground bypass pipes that had disrupted property owners and interfered with traffic along Monument, Franklin, Cathedral, Madison, Park and other streets.

So why, 7½ months later, is Spiniello about to be handed a “settlement agreement” that increases the cost of fixing the sinkholes by $5,373,933.10 – or 63% above the original price? 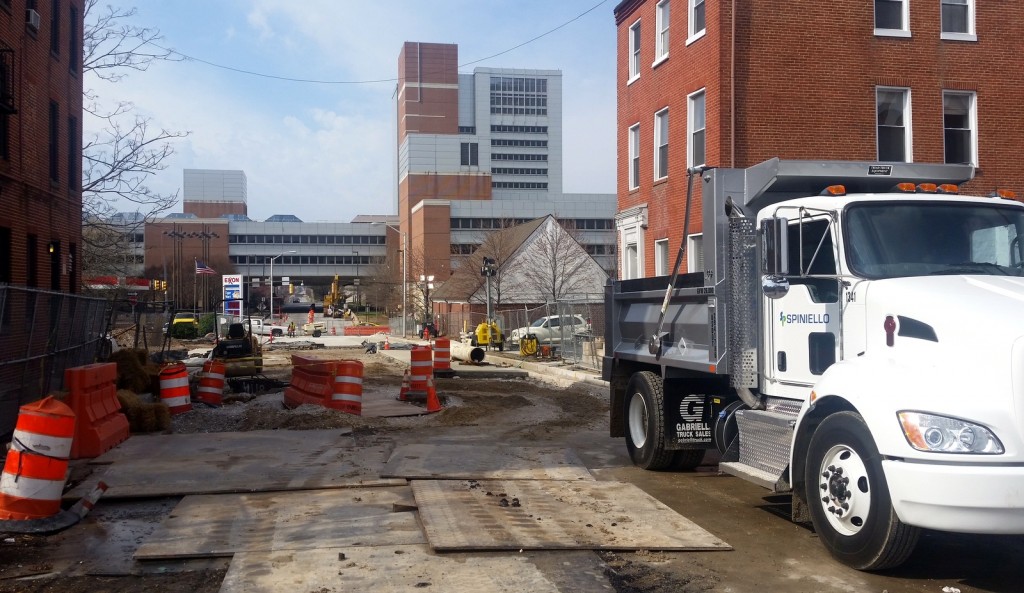 Spiniello was wrapping up work last March at both the Mulberry Street (above) and Cathedral Street (below) sites when the Board of Estimates approved $8.5 million in payments. Now the price tag is set to rise by over 60%. (Mark Reutter) 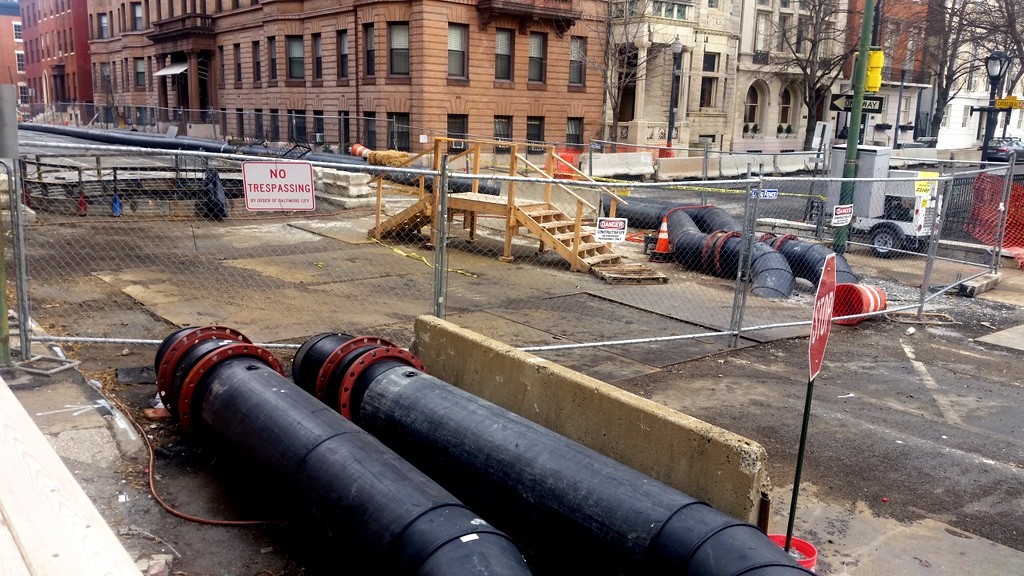 Due to “unforeseen conditions,” the work that Spiniello performed “was materially different in scale, type and duration than that indicated in the scope of work contained in the contracts.”

While defending Spiniello’s claims of unforeseen costs, the agenda item does not explain why Mayor Pugh and other board members were not made aware of those costs and conditions last March when they approved the contracts.

What is clear is the city’s defense for taking this pricey step – “to avoid the expense, time and uncertainty of protracted litigation,” the agenda says.

In addition to its three elected members (Pugh, Pratt and Young), the Board of Estimates consists of two other members.

They are Rudy Chow, the DPW director who awarded the original non-bid contracts to Spiniello, and Andre M. Davis, the city solicitor whose law department crafted the settlement agreement with Spiniello.

Right now, the Spiniello settlement is set to whiz through the Board of Estimates this morning without any debate or public explanation as a “routine” agenda item.

Given the mayor’s repeated pledges to keep an eagle-eye on spending, her vote should be of interest to everyone who pays ever-escalating city sewer and water bills. 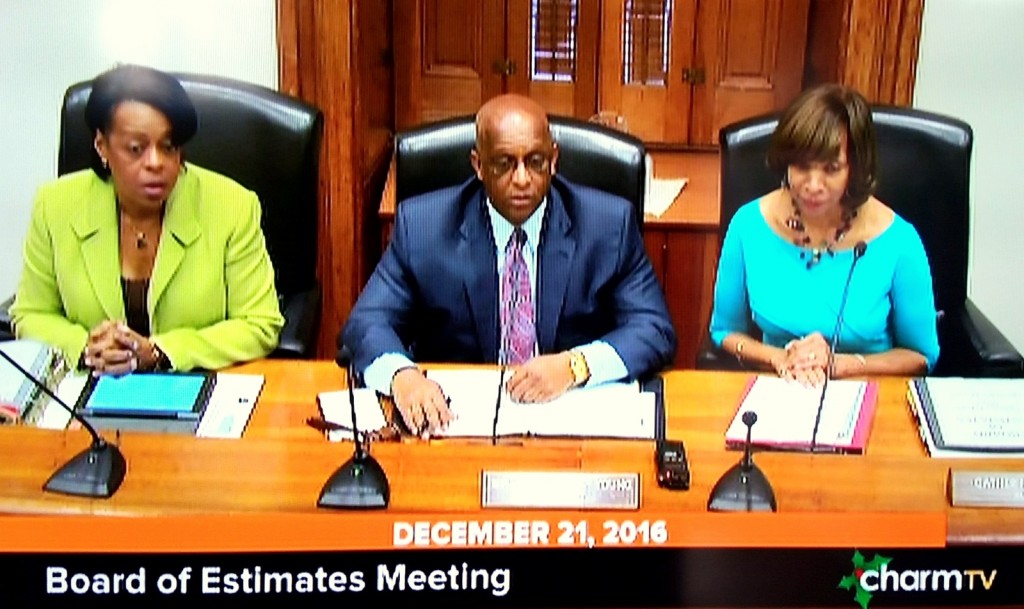 The three elected officials on the Board of Estimates are (from left) Comptroller Joan Pratt, Council President Jack Young and Mayor Catherine Pugh. (Charm25TV)