Saying nice things about outgoing board members, allowing them to look back on accomplishments – it would have been no big deal at a normal Baltimore School Board meeting.

But the furious, sign-waving people packing this meeting wanted to talk about the near-freezing conditions that students were subjected to last week in buildings allowed to deteriorate over decades.

And about lead-tainted water fountains.

And about “mouse turds on the desks.”

And about lack of transparency.

For the first hour, the commissioners at the front of the room honored and thanked outgoing chairman, Marnell A. Cooper, and fellow departing school commissioner, Tina Hike-Hubbard, for their service to children.

But, finally, the people in the back of the room exploded Tuesday evening.

“Oh, come ON!” some shouted loudly, interrupting Schools CEO Sonja Santelises in the midst of her emotional remarks to departing colleagues.

“EXCUSE ME!” Santelises shot back, livid, bringing the room to silence. 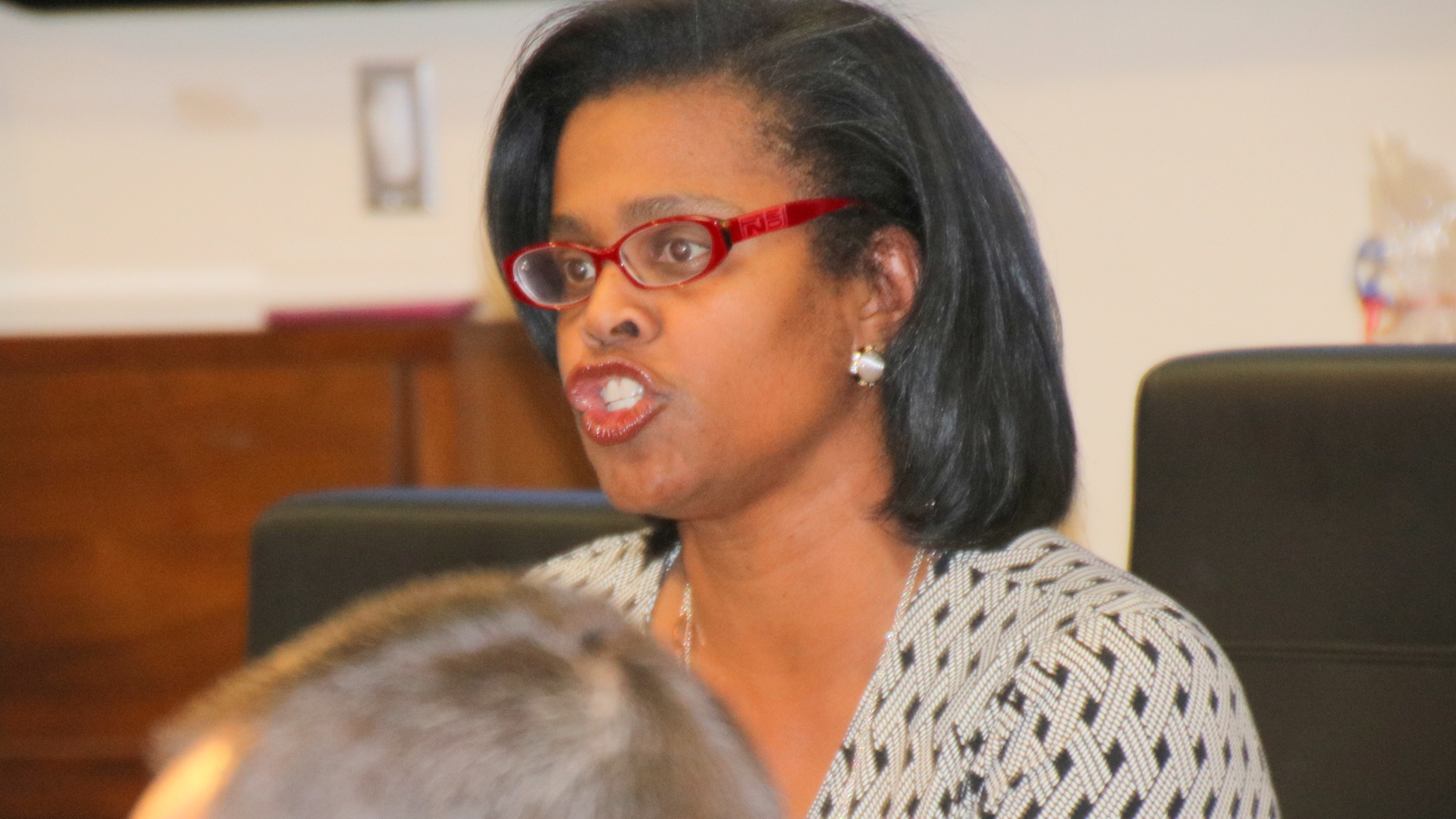 “You will have an opportunity to speak,” she said, noting that this was a regular board meeting and that a three-minute-apiece public comment period was later on the agenda.

“It is rude and disrespectful to service to undermine what is an acknowledgement of service,” she chided them.

The school system had turned off the live feed to the overflow rooms during the parents’ outburst.

But the feed was turned back on for Santelises’ reply, according to Baltimore Fishbowl.

“This is a Tragedy”

What followed was a meeting that veered in and out of control over the course of nearly three hours. The announcement of a subsequent meeting on January 22 mollified few.

“You don’t know how we feel,” one parent screamed, her voice ragged.

“But you don’t care nothing about our children being in the cold.”

“Our schools don’t have no heat! And you tell us don’t get upset?!” 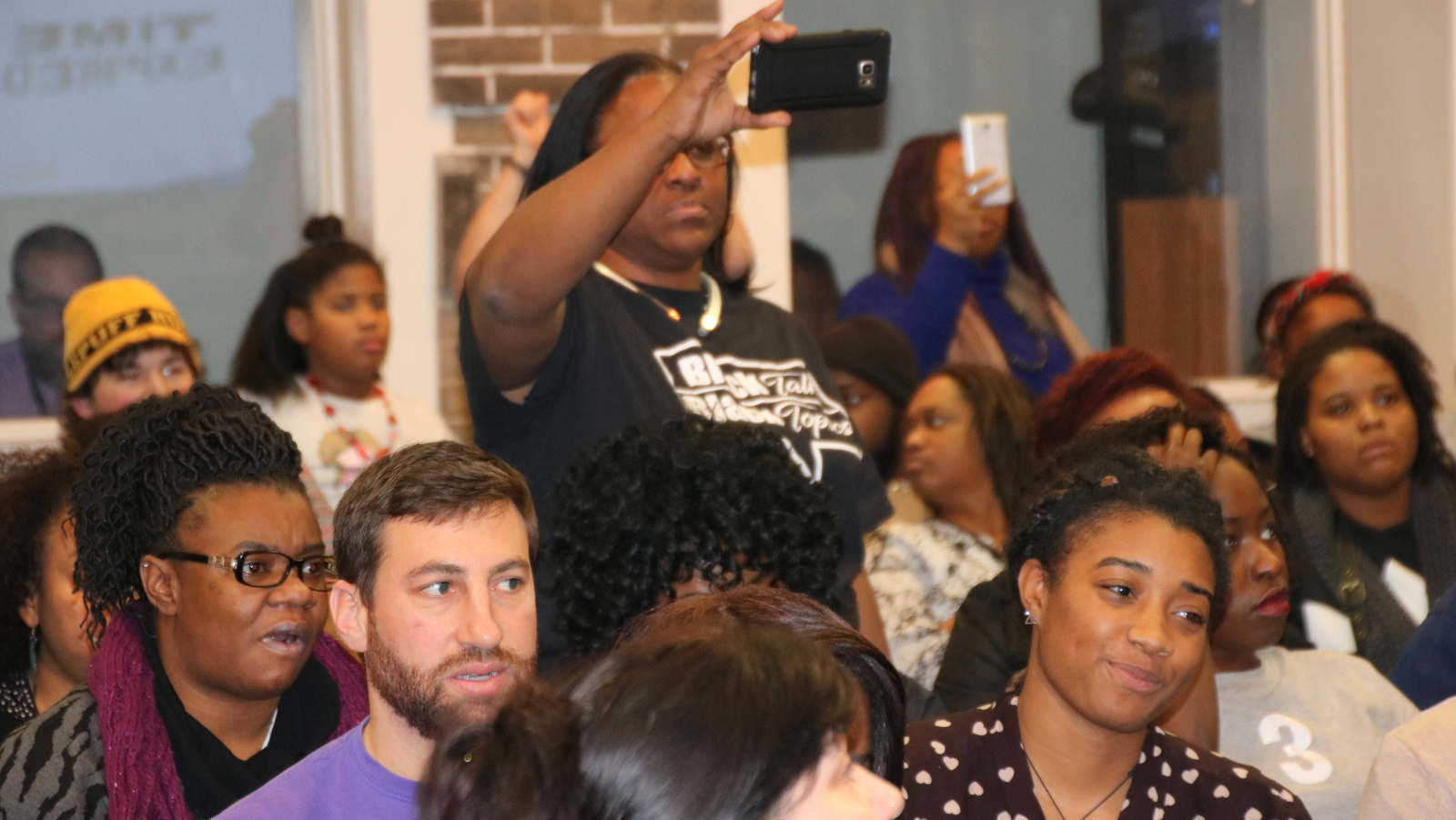 Hundreds of people, many of them in overflow space upstairs, came to Tuesday’s school board meeting. (Fern Shen)

Santelises tried to resume, but she finally gave up in the face of the fractious crowd and the unique situation – one of the school system’s worst public crises in years.

School Board Chairwoman Cheryl A. Casciani announced she would take the agenda out of order and allow the public to speak.

(Baltimore has had to return $66 million in state funding for building repairs. School officials say the funding rules were to blame.) 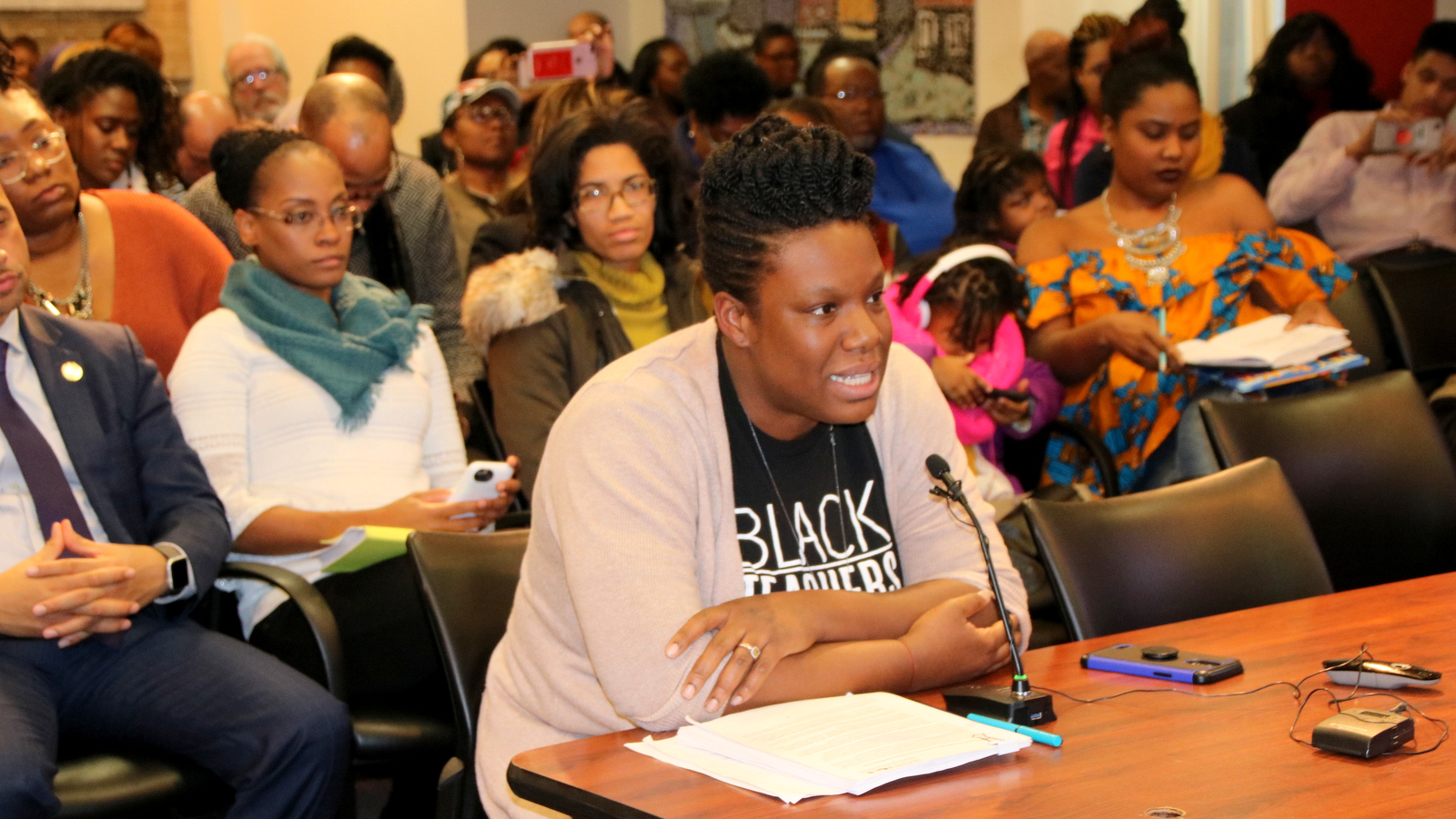 Khalilah Harris, a city school parent and former Obama administration official who who works in education policy, said she is part of a grassroots group of educators developing a racial equity plan for schools.

“The school facilities are a symptom of lack of equity for our children,” Harris said, going on to fault school officials for not finding the money to fix the system’s aging, dilapidated facilities.

“We can’t wait for you to tell us what’s going to happen any further because you all don’t seem to have a level of urgency for our children,” she said.

“We sit in front of an un-elected school board. There is no accountability here,” she added. “We are disenfranchised.” 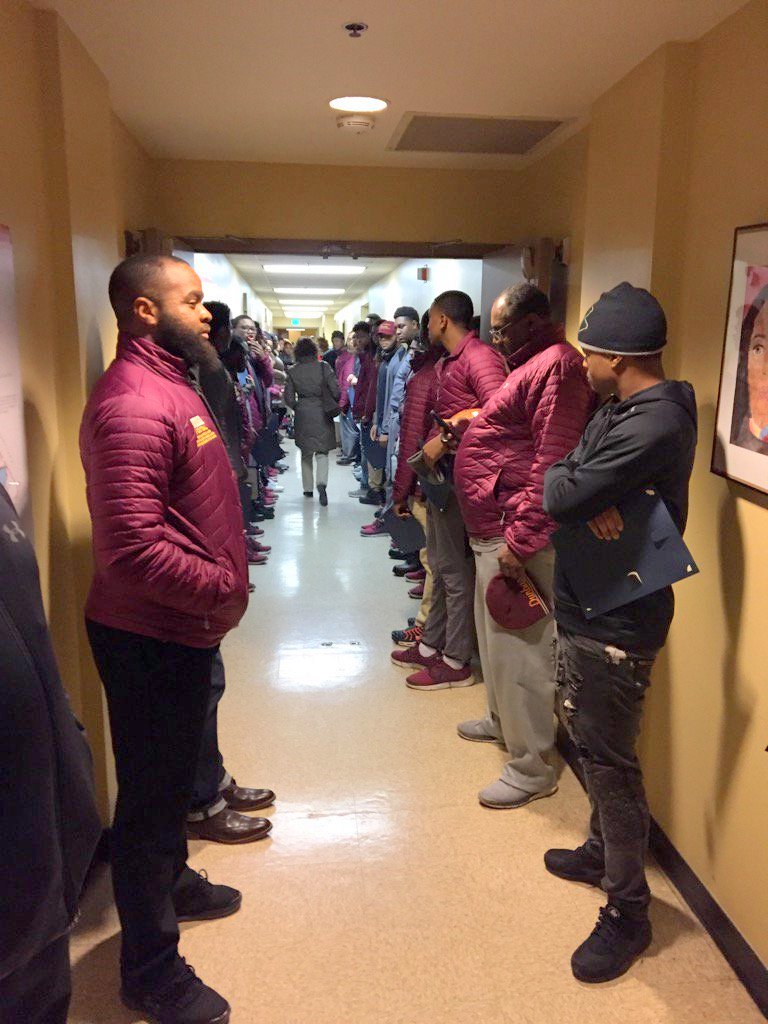 “An impressive number of Dunbar young men are in the house here at the @BaltCitySchools board meeting,” tweeted @KarenDeCamp.

“We have not done . . . a good enough job of calling out the people who are not our friends,” she said.

“All the compromises, all the backdoor deals. It hasn’t resulted in what our kids need,” she continued. “The tension in this room is the byproduct of all of the lack of transparency that has been a benchmark for decades.” 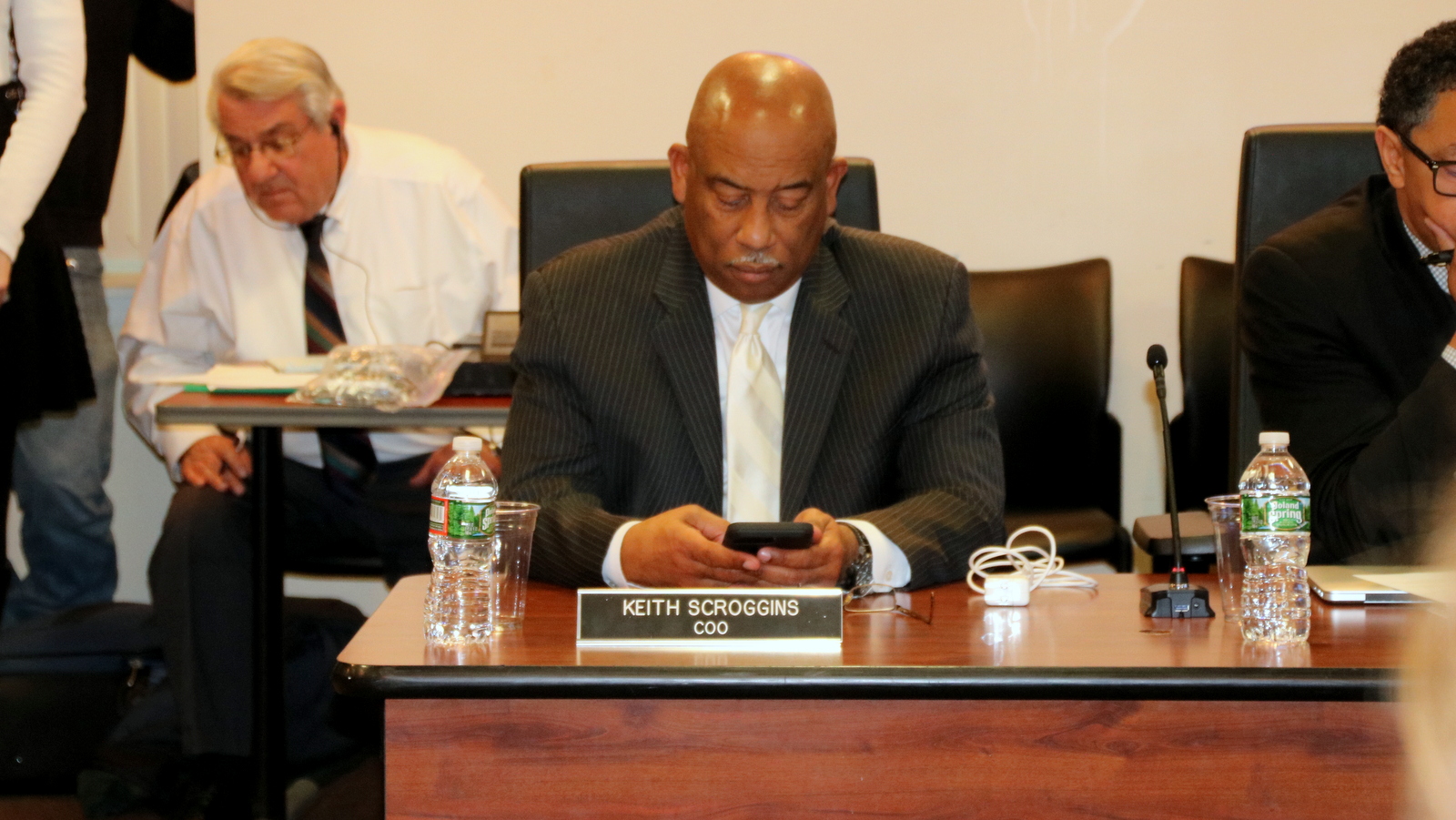 City Schools COO Keith Scroggins was on hand at Tuesday’s meeting, but did not speak. (Fern Shen)

Duncan Evans, who teaches at James McHenry Elementary/Middle School, said she represented the teachers’ group BMORE (Baltimore Organization of Rank-and-file Educators) that has presented the school system with a petition signed by 1,500 people.

The petition calls for students to be guaranteed classrooms that are warmer than 60 degrees and for principals to be empowered to check temperatures and close their schools if conditions warrant it.

Implored to close school last Tuesday and Wednesday when some teachers reported classroom temperatures in the 30s and 40s, Santelises kept most of them open.

“You don’t know how it feels to see my granddaughter go into a cold school and have to try to learn,” one woman said.

“You’re Right to be Angry”

By the end, as activist Tre Murphy began asking questions and refusing to step away from the microphone, the meeting again spun out of control.

“We need $3 billion just to bring the buildings up to standards,” said Murphy.

“I’m not interested in talking about how much you guys have done a good job as public servants. I’m interested in figuring out what are your solutions,” he said.

“The time is now to put out a statement condemning the state and even the city for the failed response to our students.”

Telling him his speaking time was up, Casciani said she would call for a recess vote, but relented after a board staffer warned “that’s going to look terrible in the media.”

New to the role of chair, Casciani struggled throughout the evening to keep order, telling people shouting and interrupting, “You’re right to be angry. What you’re not right about is that we don’t care.” 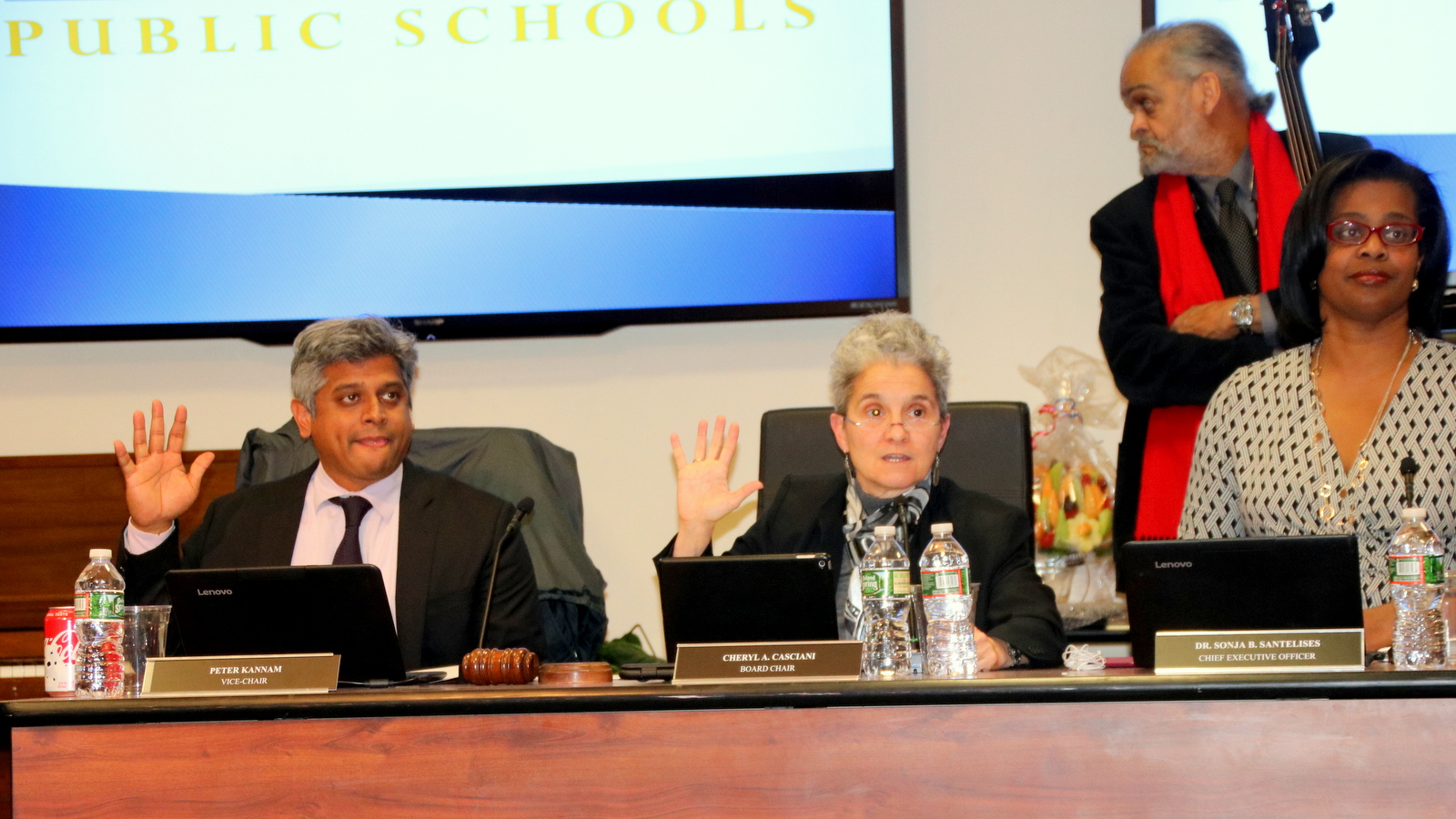 In passionate remarks at the end of the evening, Santelises said she was “fine being held accountable.”

“We messed up. We are cleaning up. But our mess up is not the only mess up. We have seen decades of mess up and a lot of it is connected to funding,” she said.

She also lashed out at the media, charging that some of the coverage has been racist.

“We know the reasons why the narrative is always about incompetence in the city of Baltimore, and it is obviously linked to the demographics of the city,” Santelises observed.

The press, she said, “wants the drama, and we feed the cycle that says we aren’t worthy of the same things that other people are worthy of.”

Out in the Cold

While some were inside trying to hold officials responsible, other were outside seeking to elect new officials.

“If people don’t go to the voting booth, none of this is going to matter and we’ll never have meaningful change,” said Shamoyia Gardiner.

Gardiner and Brittany Oliver, of the group Not Without Black Women, set up a voter registration table outside the building. 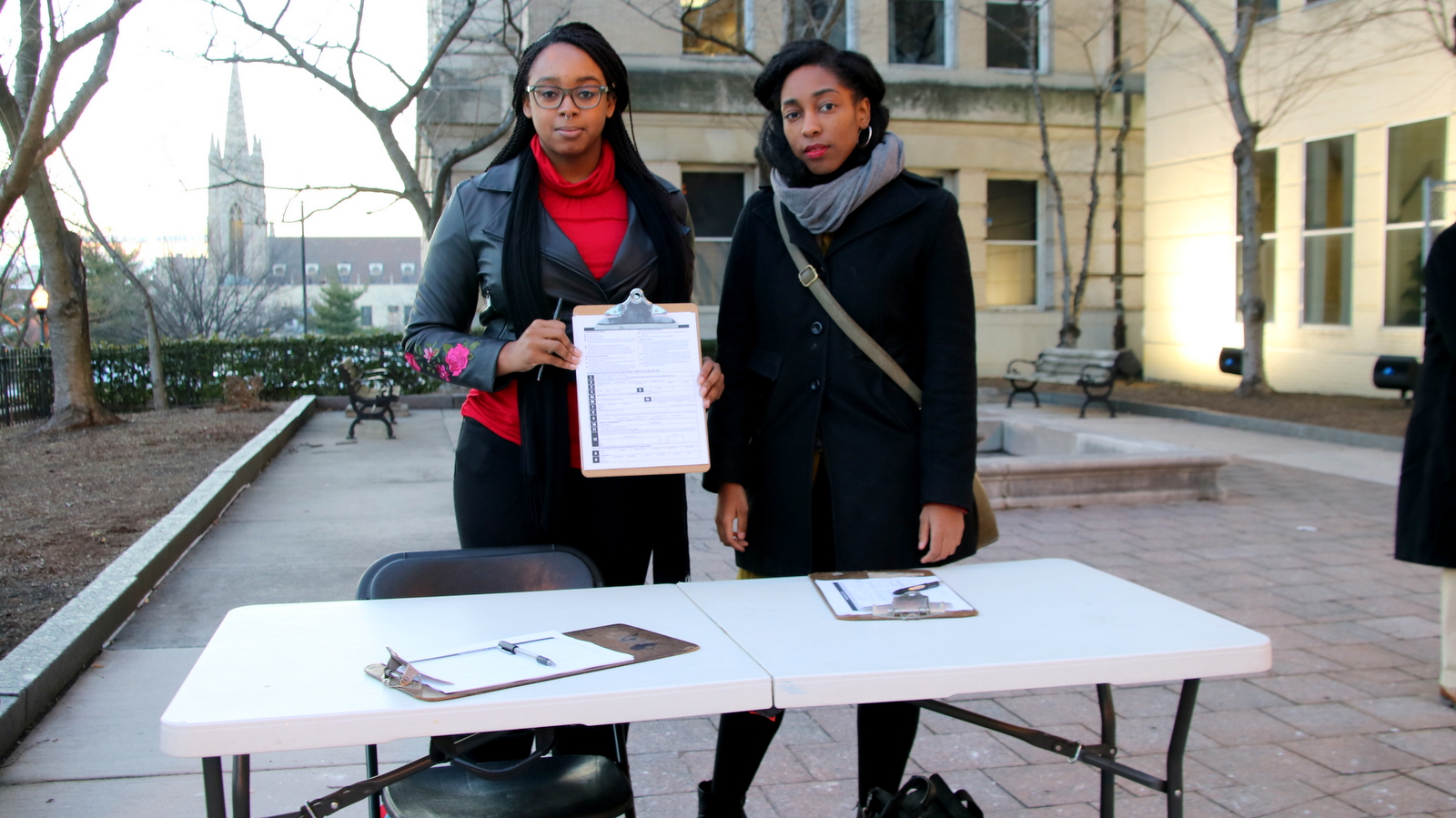 Shamoyia Gardiner and Brittany Oliver, of Not Without Black Women, registered people to vote outside the school board meeting. (Fern Shen)

Nearby, Patterson High School world history teacher Mike Pesa stood silently at the top of the steps with a sign that included thermometers and the message, “I am a human being with rights.”

The temperature in his classroom last Tuesday was 43 degrees.

“For one teacher in my school, it was 37 degrees,” he said. “The music teacher – her radiator exploded like a geyser.”

Asked who he blames, Pesa said he holds adults from Annapolis to Baltimore responsible for the inhuman conditions.

“If a child was kept in 37 degrees or 40 degrees in their home, child protective services would intervene,” he said. “But it’s okay for our students in the public schools our government runs?” 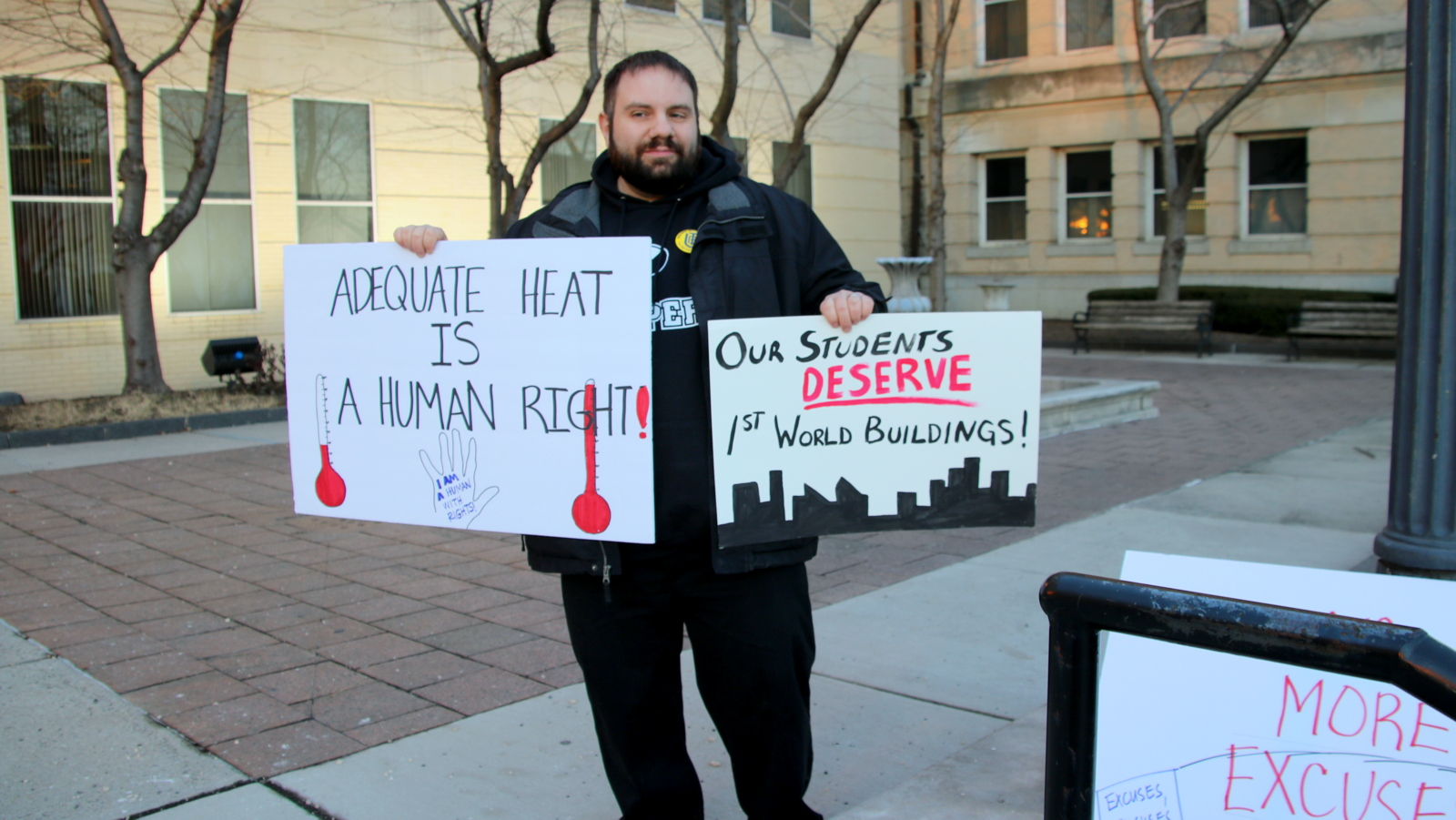