About four blocks from the Penn-North neighborhood where Mayor Catherine Pugh this week railed against corner stores – telling one proprietor that his establishment “looks like a hellhole” – Peter and Ky Lim said they knew nothing about the controversy.

Sweeping through with a cadre of police officers and television cameras in tow, Pugh had said some of the establishments need to be shut down, observing that they sell unhealthy food, stay open too late and attract loiterers and crime.

The Lims also run a corner store – Mama’s Food Market at the intersection of Westwood Avenue and Mount Street – but the resemblance to what Pugh was describing ends there.

A bunch of ripe bananas was positioned on the counter near the cash register yesterday. In the cold food case, there were oranges and heads of lettuce, plus turkey bacon, sausages and boxes of eggs.

“I just need one, Pete,” a woman said, as she grabbed a single onion from a bin.

“It’s his favorite store,” said Renee Smith, the caregiver for four-year-old Dylan, as she grabbed some juice and a snack for him.

“I bring him here every day for a baloney sandwich or, today, a pizza he’s going to eat when we get home,” Smith explained. 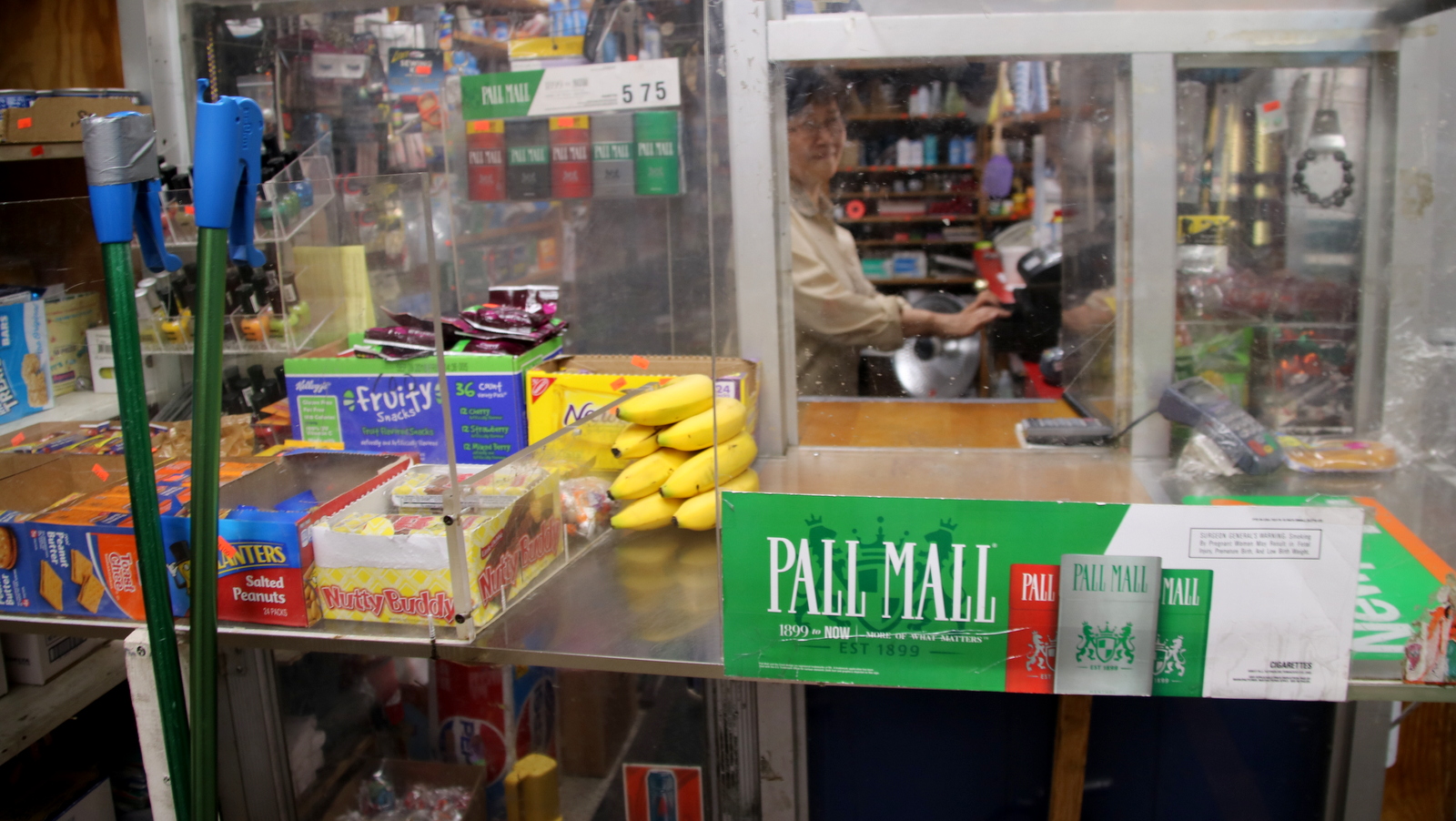 Smith hadn’t heard of Pugh’s complaints about carryouts like this one. She said she knew the kind of trouble spots the mayor was describing, but Mama’s is not one of them.

“They don’t have the teenagers and people hanging around their store. This is a good store,” Smith said, as she and others dropped in, purchasing snacks, drinks, laundry detergent, vegetables and other items.

“The rugs are clean. They have a variety of things. Nothing is dirty here. Everything’s lined up. Nothing is out of date,” Smith continued, adding that she was aghast that someone might lump “the best store around” in with the others.

“I wonder if the mayor has ever been in here,” Smith remarked. “She must not have been.”

Pugh was visiting West Baltimore as part of her broad-based Violence Reduction Initiative, which is centered around daily meetings where department heads share reports on everything from illegal dumping to overdose spikes and homeless encampments.

Pugh’s harsh pronouncements about corner stores drew mixed reviews in West Baltimore, where one man said taking away the small outlets “isn’t going to solve anything.”

“You’ll just have the same bunch of unemployed, undereducated people, but now they’re not going to have anyplace to buy anything,” said Harrison Jones, 45, as he waited for a bus on North Avenue.

“People need to have jobs. That’s the starting point.” 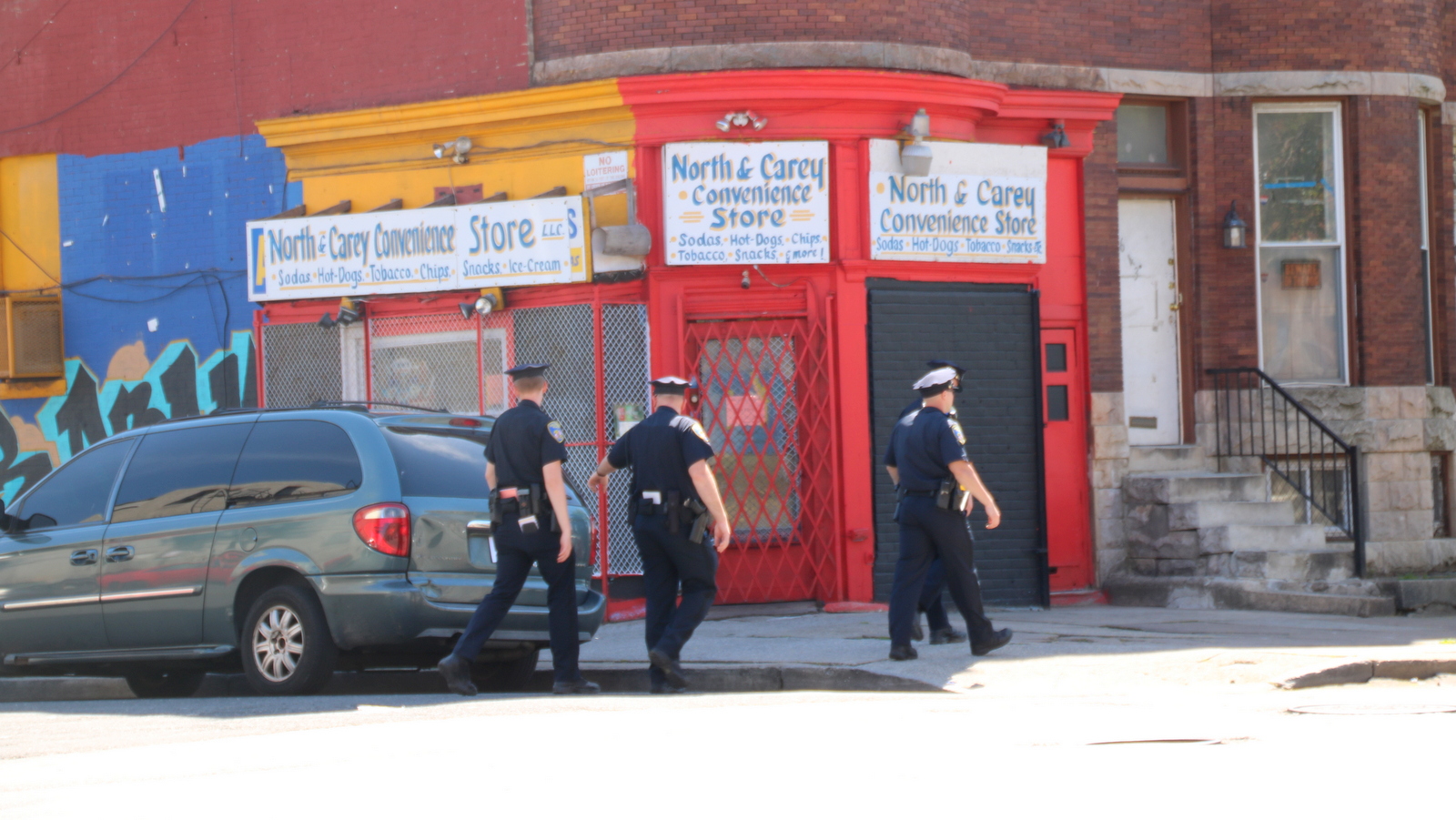 Charlotte Thornton, standing nearby, chimed in, saying some carryouts, along with cheap liquor stores, do attract drug activity and crime.

“We’ve been complaining about this stuff for, like, the past 30 years. Did [Pugh] just wake up and discover it?” said the 64-year-old, who lives in Rosemont.

“Haven’t they had the laws to stop that? Where they been?” 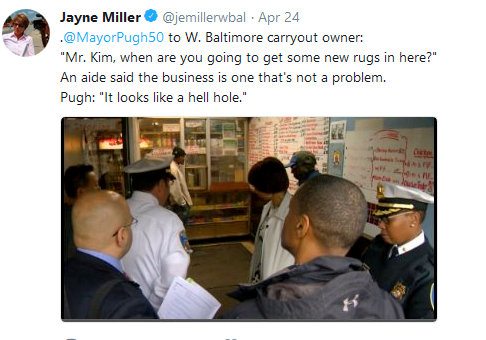 Receptive to research by public health experts who found a correlation between liquor stores and crime and poor health, the city set out during the Rawlings-Blake administration to use zoning laws to cut down on the number of liquor outlets.

On social media, some have found disparity in the way stores are regarded by City Hall from one neighborhood to the next.

While Pugh denounced corner stores in impoverished Sandtown, residents in redeveloping Remington have successfully argued that corner stores should be encouraged  because they boost neighborhood vitality.

“Didn’t we just pass a new zoning code to make it easier to mix uses in neighborhoods and to allow for small businesses to open in corner stores?” one commenter remarked on Facebook. “It’s so bonkers.” 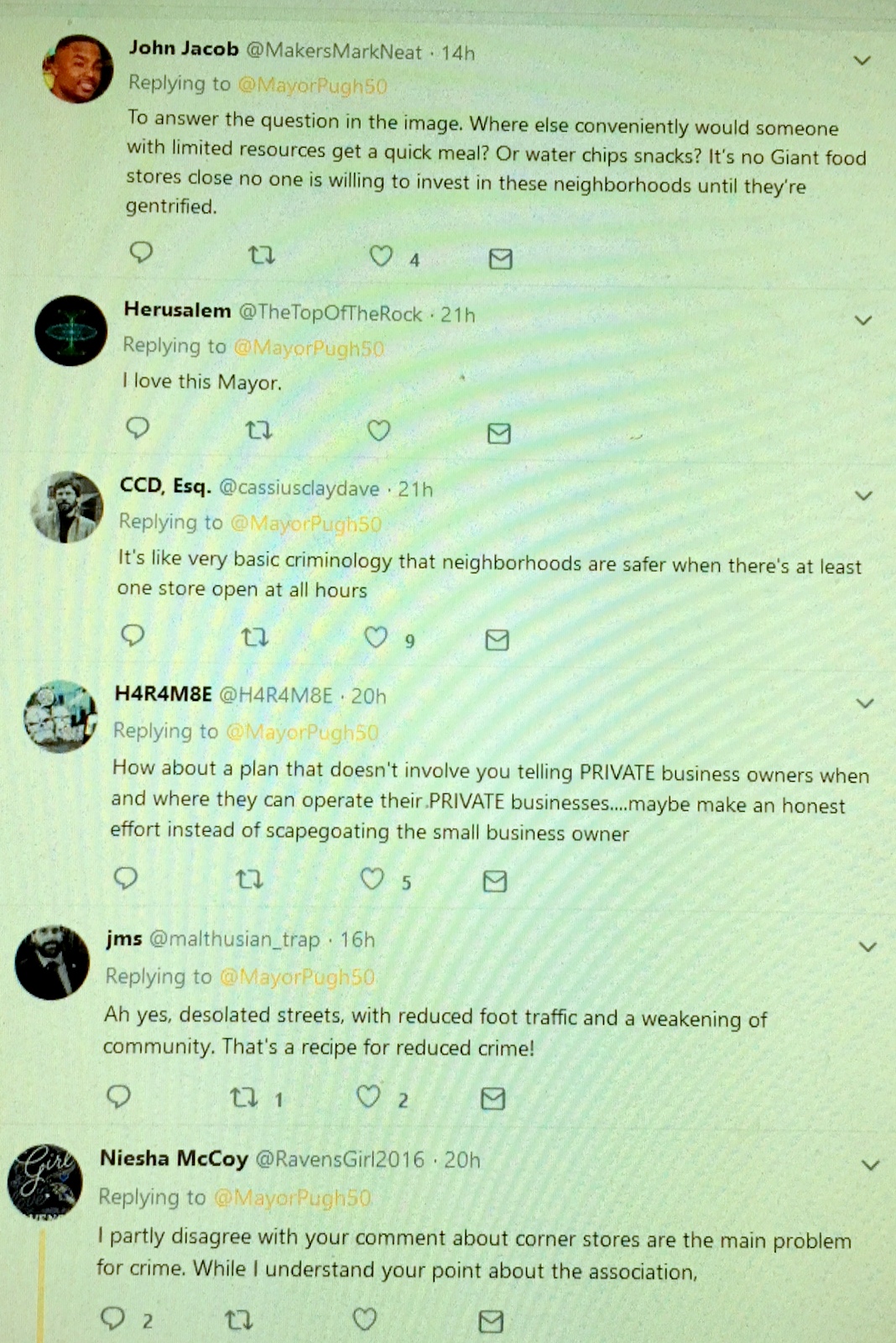 Mayor Pugh asked why it is reasonable to allow carryouts to proliferate “in neighborhoods that are already strained?” Twitter answered.

Asked how he keeps his store atmosphere so seemingly safe and orderly, Lim said he’s strict.

“When those young people want to come around, I tell  them, ‘You can’t stay. I call the police,’” he said. “They know I will do it.”

During the 10 years he’s had the store, he said he’s never been robbed.

“This neighborhood is like a family,” he said. “Sometimes teenagers make trouble, but the neighbors, no, never.” 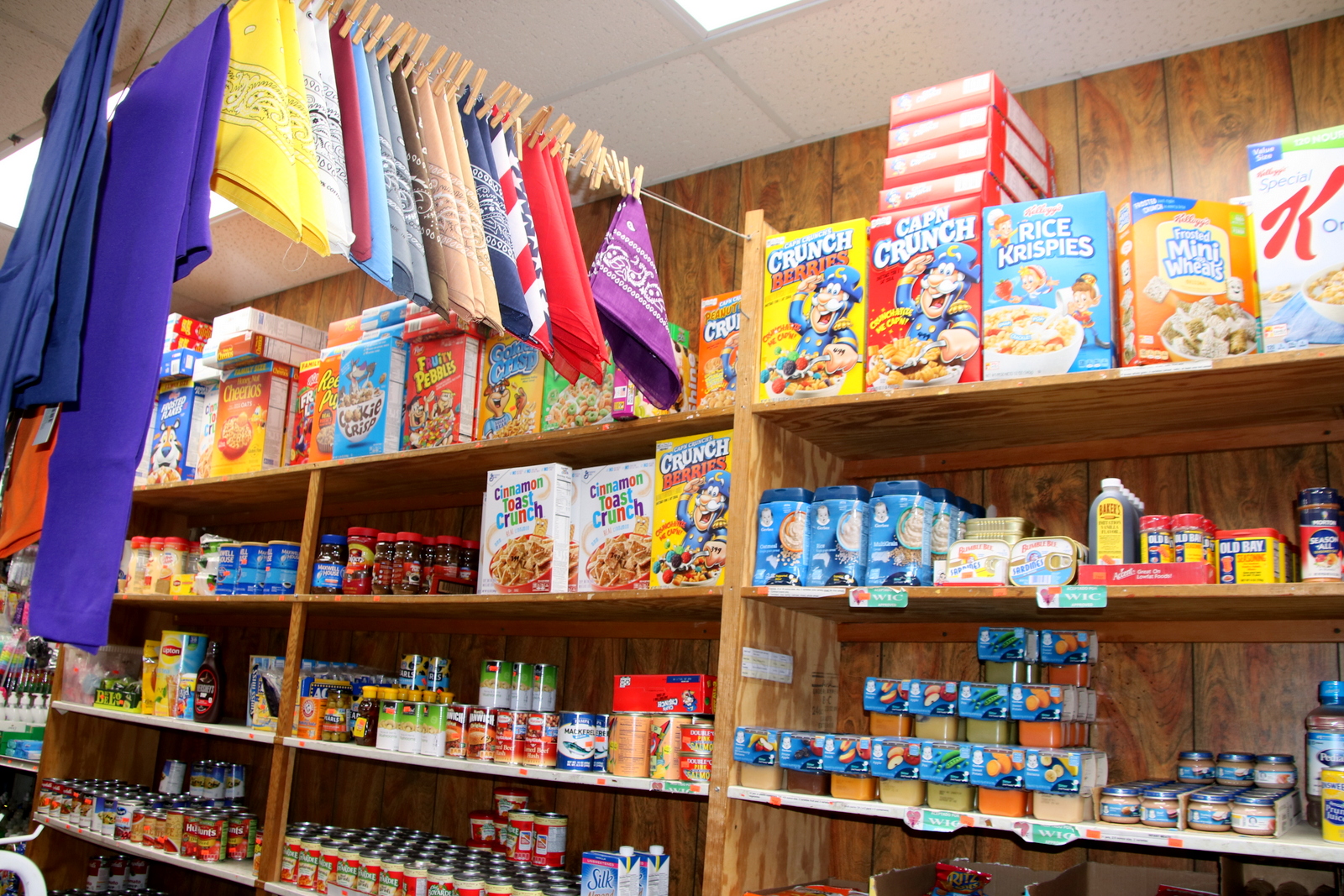 A little of everything is at Mama’ s Food Market. (Fern Shen)

Smith was right when she said the store merchandise is “lined up.”

Yesterday there were orderly rows of baby food, tampons, diapers, ramen noodles, dried fruit snacks, cans of Chef Boyardee pasta and more. Children’s marble notebooks for school were stacked on a shelf next to bottles of white Elmer’s Glue. 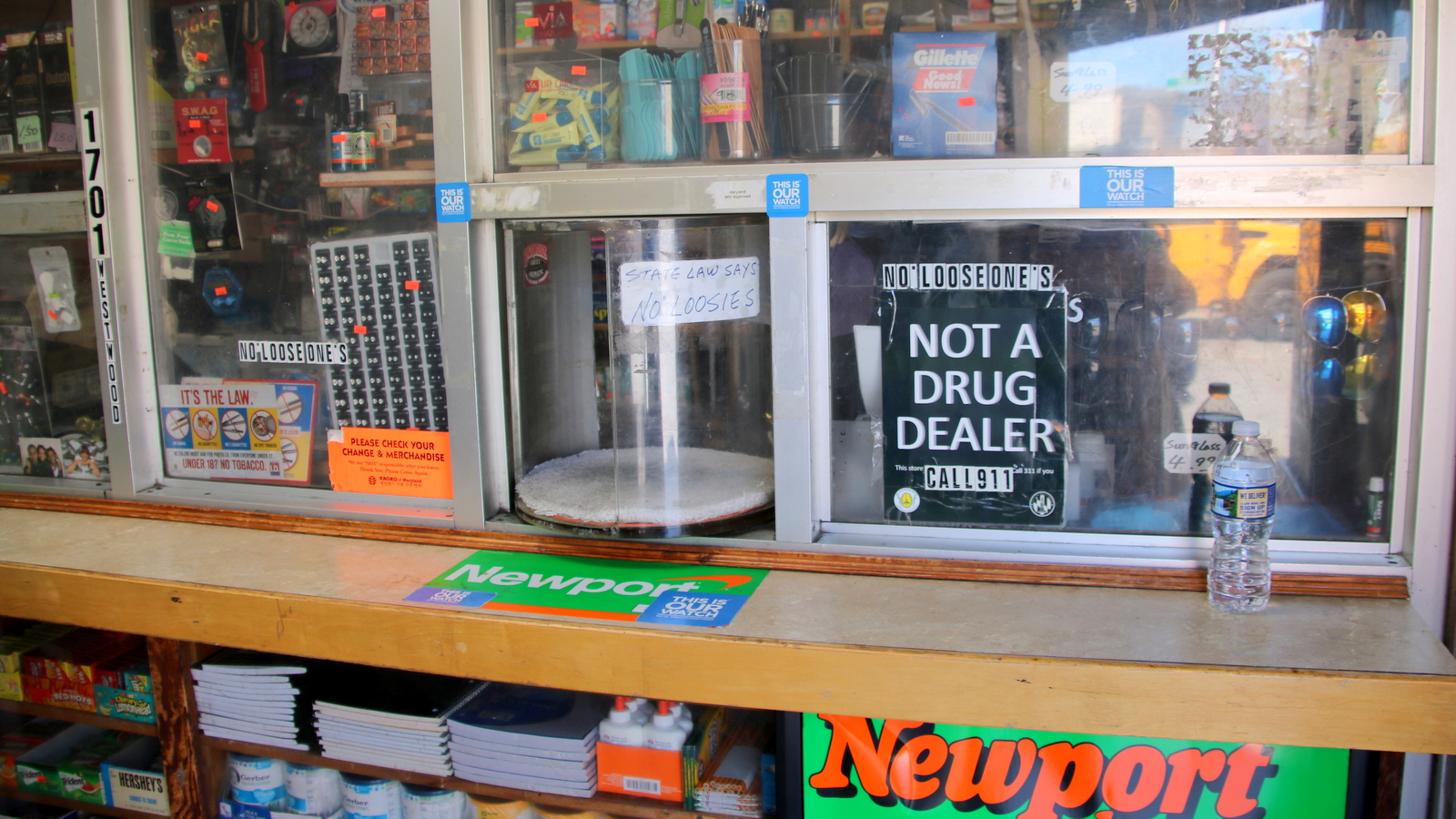 A warning at the cashier’s window. (Fern Shen)

There were also signs of the trouble that Lim has to keep at bay. There were “No Loitering” placards, and several saying, “No Loosies,” referring to single cigarettes, which are illegal to sell.

“NOT A DRUG DEALER,” warned another sign on the plexiglass window toward the front of the store.

Smith said there is nothing about these stores that is inherently bad.

“You just have to clear away the troublesome people,” she said. “It all comes down to how you manage your store.” 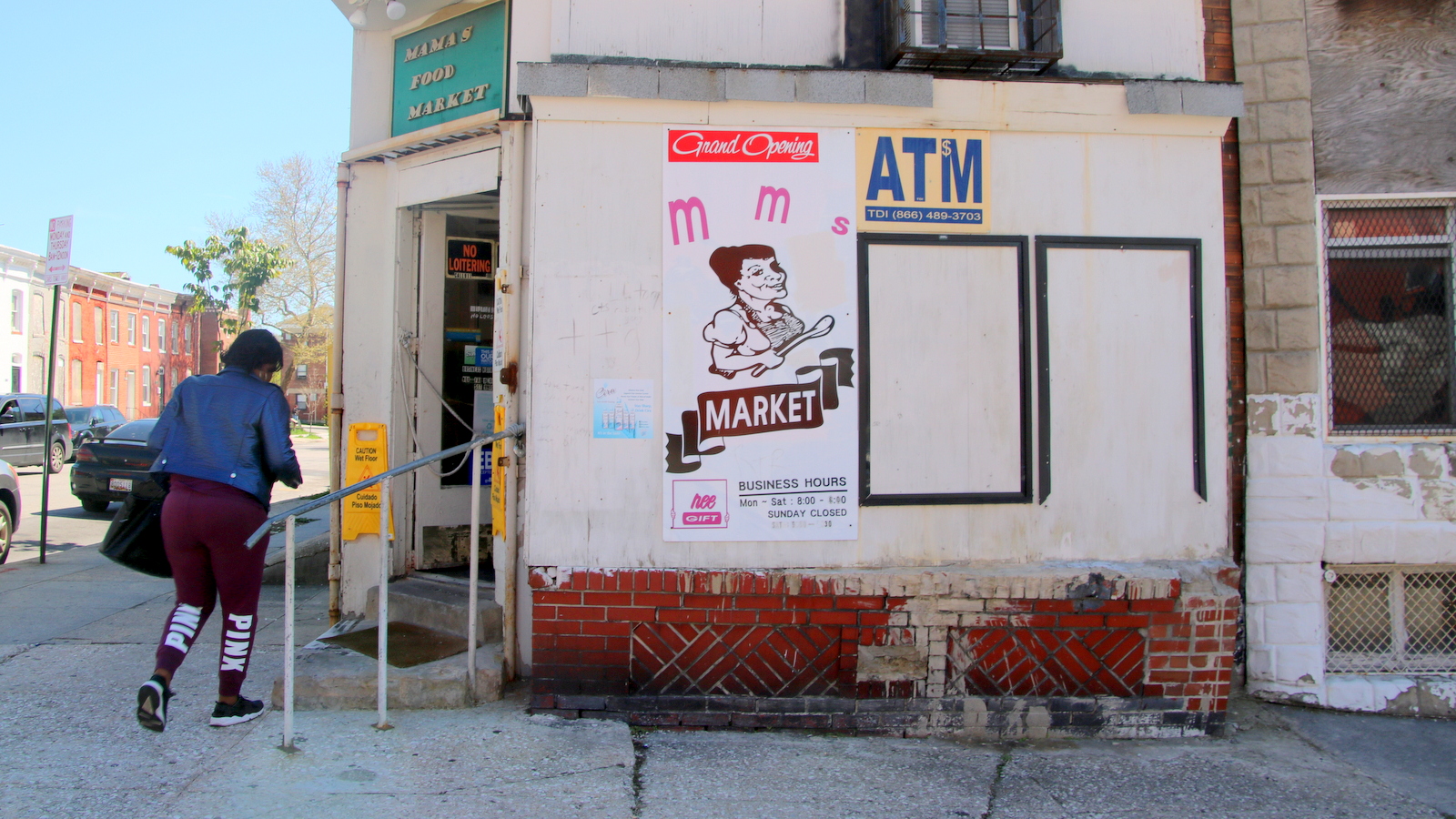