The saga of political intrigue created in Baltimore County by the chief of strategic alliances in Baltimore City continues as new information surfaces in a report filed with the Maryland Board of Elections about the shrouded activities of James T. “Jim” Smith Jr.

Most strikingly, a political entity controlled by Smith paid nearly $300,000 in support of Vicki Almond’s losing bid as the Democratic Party’s candidate for Baltimore County executive in June.

That’s a lot of money, and understanding the whys and wherefores of the strategy behind its deployment requires a little background.

At age 76 and a two-term Baltimore County executive himself, Jim Smith is a throwback to the era of machine politics and backroom b’hoys who is still empowered by an obscure electioneering device known as a “slate committee.”

Such committees can funnel unregulated amounts of money to political candidates who are part of the slate, as opposed to the $6,000 limit for individual campaign contributions by businesses and individuals.

Smith founded the Baltimore County Victory Slate back when he was county executive and later diverted half a million dollars from “Friends of Jim Smith” to the slate when he gave up running for elective office.

All of which makes the Victory Slate a perfectly legal slush fund, available at his command for candidates of his choice, with little transparency.

(Smith’s name does not appear on pre- and post-primary state election disclosure forms – which allows him to deflect questions about his slate. Instead, the latest report lists the slate’s chairman, Phyllis Panopoulos, Smith’s former executive assistant, and treasurer, William “Chris” McCullom, whom Smith appointed to his present post as executive director of Baltimore County’s Ag Center.)

Two years ago, Smith influenced Baltimore City elections by using the Victory Slate to make a $100,000 loan to Pugh during the final days of her primary battle with Sheila Dixon.

The loan was so hurried that Smith forgot to put Pugh’s name on the Victory Slate’s list of affiliated candidates. This violation of state election law resulted in a gentle rebuke by State Prosecutor Emmet Davitt and a $3,000 civil fine.

But consider the upside for Smith:

He got a job, newly created by Pugh after she won the primary and coasted to a lopsided victory in the general election.

That job – chief of strategic alliances – came with a $178,500 salary last year, one of the biggest paychecks in city government. At the same time, his responsibilities are vague, relating to the supervision of the transportation department and expediting real estate development for the mayor.

His appointment was trumpeted by the Towson law firm run by his son, Michael Paul Smith.

And following the senior Smith’s appointment at City Hall was news that David K. Gildea, a senior partner at Smith, Gildea & Schmidt, had garnered a coveted seat on Pugh’s transition team, “tasked with providing recommendations for streamlining and refining the development and permitting process in Baltimore City.”

All of this came at a time when Smith wasn’t even a resident of Baltimore City.

Today, he follows the charter rule that top officials reside within Baltimore’s boundaries. He rents an apartment near Harbor East, while simultaneously owning a condo in Timonium with his wife Sandra. He recently transferred his voter registration address to his Harbor East apartment, making him officially a Baltimore City voter.

As Mayor Pugh’s presumed right-hand man, Jim Smith is a rarely seen and even less so heard from at City Hall.

He makes occasional public appearances, such as watching the mayor ride a scooter at a recent photo-op, but otherwise stays out of the public eye. His office phone does not appear to be answered by a secretary, but goes to automatic voicemail.

Calls and emails by The Brew seeking comment about his use of Victory Slate funds resulted in this terse email reply: “I am not informed re: the Victory Slate.” Asked who authorized the slate’s expenditures, Smith did not answer. 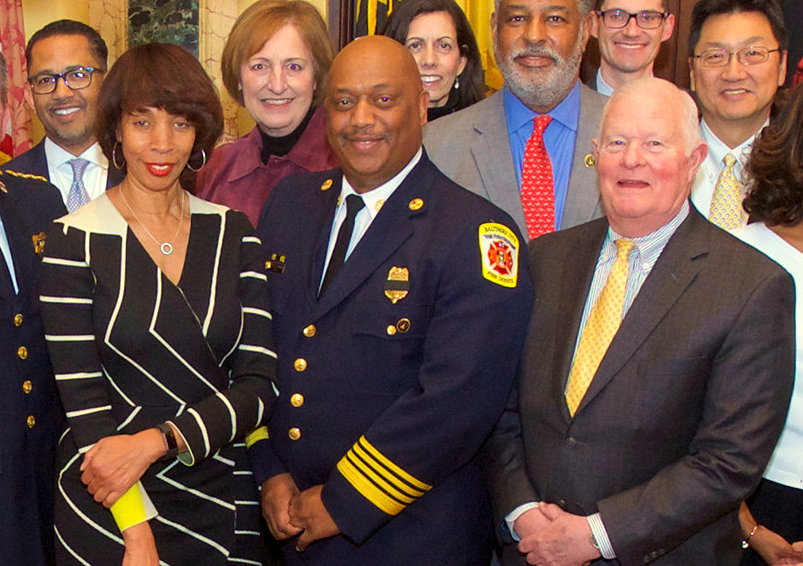 So why did a man who can’t vote in the county lavish nearly $300,000 on Vicki Almond – not to speak of deploying his son Michael, his daughter-in-law Carin Smith, and other members of the Smith law firm to help with the Almond campaign?

• Almond was the flat-out choice of county developers for which Smith, Gildea & Schmidt extracts handsome fees as a representative. (For example, when the senior Smith was the firm’s “of counsel” advisor, it cut a deal with County Councilwoman Almond to smooth the path for the building of Foundry Row in Owings Mills.)

• State Senator Jim Brochin, considered the primary front runner, was not only campaigning against ill-conceived development, such as Caves Valley Partner’s stalled Towson Row project, but had vowed to end “pay to play” politics in the county.

Two weeks before the primary, the Victory Slate started mailing out tens of thousands of attack mailers accusing Brochin of being a liar, a hypocrite, not a “real Democrat” and beholden to the National Rifle Association.

The Victory Slate then sent out tens of thousands of other mailers lauding Almond as an education advocate and a wonderful single-parent mom.

John “Johnny O” Olszewski Jr., the third candidate in the race, escaped the mudslinging and wound up beating Brochin by 17 votes (out of 84,601 cast).

Almond came in third. How much the mailers contributed to Brochin’s defeat is anyone’s guess. 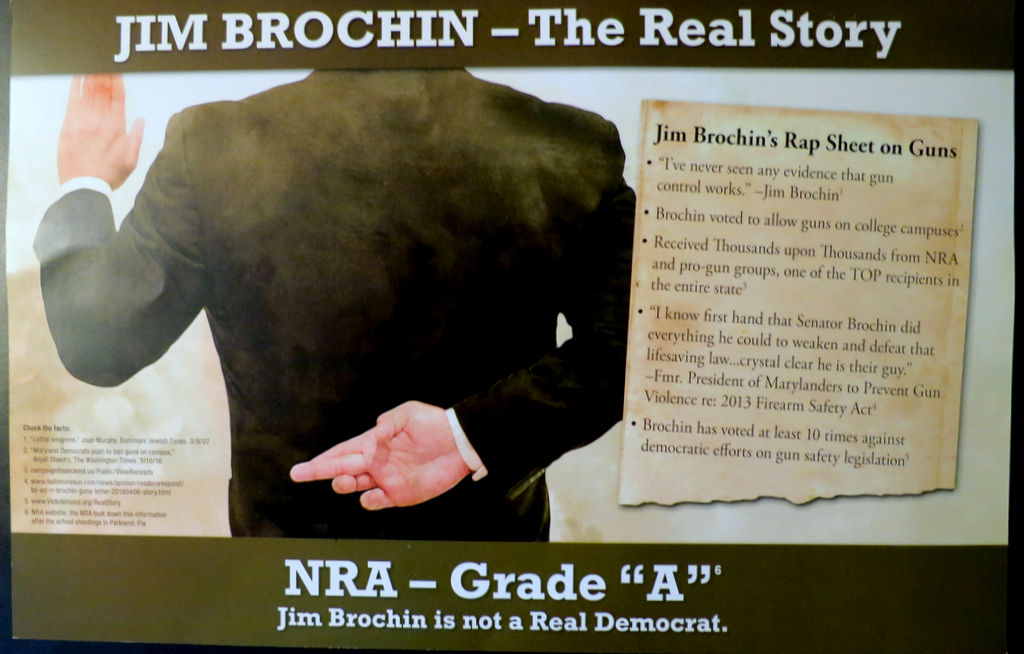 One of the anti-Brochin mailers circulated by the Victory Slate just before the Democratic primary. Did its accusations sway voters against a candidate who vowed to end “pay to play” politics in Baltimore County? (Brew file photo)

Despite the Almond setback, Smith’s influence in Baltimore County affairs is far from over.

He has long been close to John A. Olszewski Sr., the father of “Johnny O,” who served on the County Council while Smith was county executive.

In recent weeks, Michael Paul Smith and David Gildea (who had been big Almond contributors) have switched to Olszewski, who is running against Republican Al Redmer Jr. in the general election.

Tonight, Smith and Gildea will co-host an Olszewski fundraiser in Reisterstown that is sure to attract the developer crowd.

In an email notice sent out by Lawrence Macks, president of Chesapeake Realty Partners, tonight’s attendees will “look forward to a frank conversation about Johnny’s vision for the County.”

As co-hosts of the event, Smith and Gildea have each pledged $4,000 to the Olszewski campaign (as has former Howard County executive Kenneth Ulman, a longtime ally of the senior Smith and member of the Victory Slate).

Asked by The Brew if the Victory Slate was now backing Olszewski, Jim Smith did not respond. 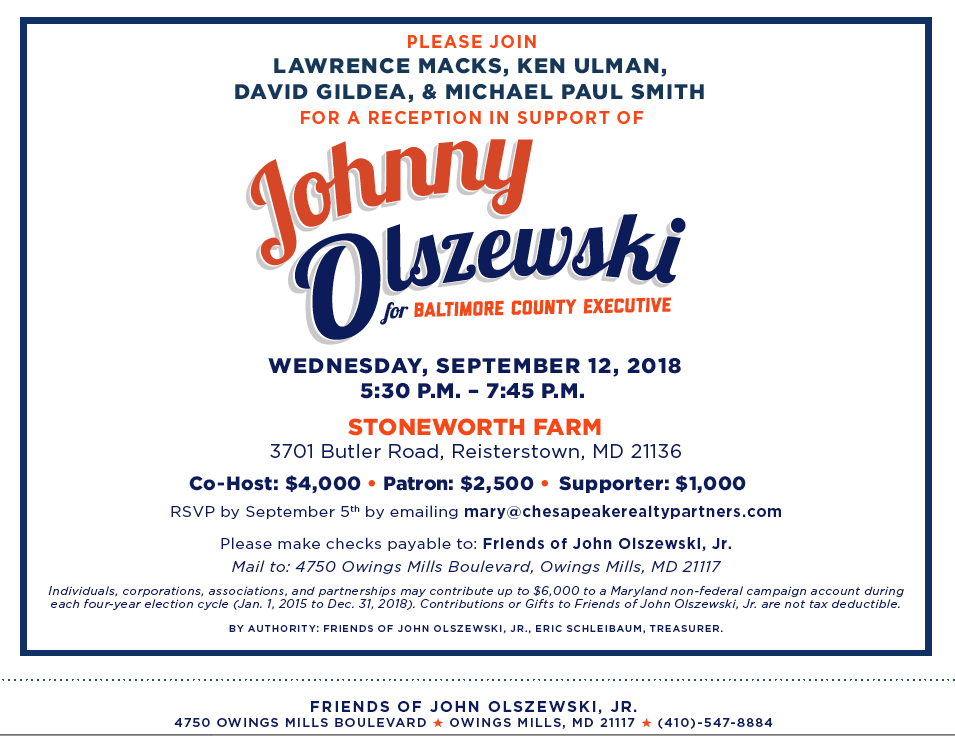 Developer Larry Macks sent out this email regarding tonight’s fundraiser “to get to know Johnny better.”

Returning to the Almond campaign, here is the breakdown of the Victory Slate’s spending in the latest reporting period between early June and August:

• $13,125 to Spiros Consulting, a Washington, D.C., a policy shop known for its opposition research.

• $95,400 to Beytin Group, a Virginia-based direct-mail agency owned by Aaron Beytin and his wife. Beytin is the son of Abby Beytin, president of the Teachers Association of Baltimore County (TABCO) who helped engineer a controversial endorsement of Vicki Almond last March.

• $122,000 to Creative Print Group, a Catonsville direct-mail company that most likely (it is not disclosed in the Victory Slate’s August 28 finance report) printed “positive” mailers that lauded Almond shortly before the primary.

To replenish these funds, Smith will need cash transfers from the campaign committees of the 15 members of the slate. So far, only retiring state delegate Dan Morhaim has given it any money ($3,000 in mid-June).

The two Baltimore City officials on the slate are Mayor Pugh and City Councilman Eric Costello.

Neither Pugh nor Costello has replenished the fund, though both have contributed directly to Olszewski’s campaign since the June primary. ($1,000 came from Catherine E. Pugh & Co., the mayor’s longtime public relations firm, and $6,050 from Costello via “Johnny O’s” own slate committee, the Baltimore County Future Slate.)

While Smith will need considerably more cash to return the Victory Slate to its former glory, the $65,000 he still has on hand could buy him favor with the Olszewski camp as the county executive race enters its home stretch.