When Khalil Zaied left as Baltimore’s deputy mayor for a job in El Paso, Texas, in 2016, then-Mayor Stephanie Rawlings-Blake said, “Our loss will be El Paso’s gain.”

Zaied is now back in Baltimore. And not only back, but working for a private company managing a project that, already doubling in price, was developed and bid during his time as deputy mayor.

Last week, the Board of Estimates upped the amount for repairing the city’s underground conduit system from $26 million to $50 million – with the prospect that the contract may double again to $100 million.

The latest wrinkle is that the person running Tri-Venture is Zaied.

Man of Many Jobs

Although not a licensed professional engineer, the 52-year-old has held a multitude of top-level engineering and public works jobs in city government. He has been a construction project manager for Baltimore City Schools, chief of highways, director of Public Works, director of Transportation, and chief of the conduit division.

As Rawlings-Blake’s deputy mayor – an appointed, not elected, position – Zaied oversaw the Department of Transportation as it prepared a Request for Proposals for the conduit project in the winter and spring of 2016.

The Brew has tried to contact Zaied about his role in the conduit contract and the circumstances of his hire as a regional vice president for KCI, responsible for the “management, oversight and coordination of KCI’s multi-year conduit contract with the city of Baltimore,” according to a company press release.

He has not yet replied to queries by phone, Facebook and email.

Responding on behalf of Zaied and KCI, director of corporate communications Amy Lambert directed The Brew to the Baltimore Department of Transportation.

“Our client has asked that we refer all questions” to them, Lambert said, speaking by phone with a reporter this morning.

Baltimore’s City Code (Section 6-22) forbids a former public servant to “assist or represent a party, other than the City, in a case, contract or other specific matter” if the ex-employee “significantly participated in the same matter as a public servant.”

More simply stated, “a former employee cannot work on the development of a contract, then go work for the company that got the contract,” Avery Aisenstark, director of the Baltimore Ethics Board, told The Brew.

Aisenstark said he would need to know more about “the exact circumstances” of the Tri-Venture contract before he could “opine” on Zaied’s current employment. Neither he nor the ethics board was aware of Zaied’s job with KCI, he added.

Praised by Rawlings-Blake as “a skilled and innovative leader,” Zaied was no stranger to controversy. As DOT director, he supervised the city’s speed camera program that issued tens of thousands of dollars of improper speeding tickets.

He was faulted by the Inspector General for failing to implement improvements in payroll processing that resulted in overtime fraud, while federal prosecutors went after the chief of DOT’s Circulator bus system, who admitted selling surplus bus shelters for $70,000.

Zaied also received, while a city official, more than $14,000 in homestead property tax breaks on a Butchers Hill rental property he owned (and still owns). The credit should only have been available to owner-occupied homes.

He paid back the money after he was questioned by a reporter about an outstanding bill he had received from the Maryland Department of Assessments and Taxation. 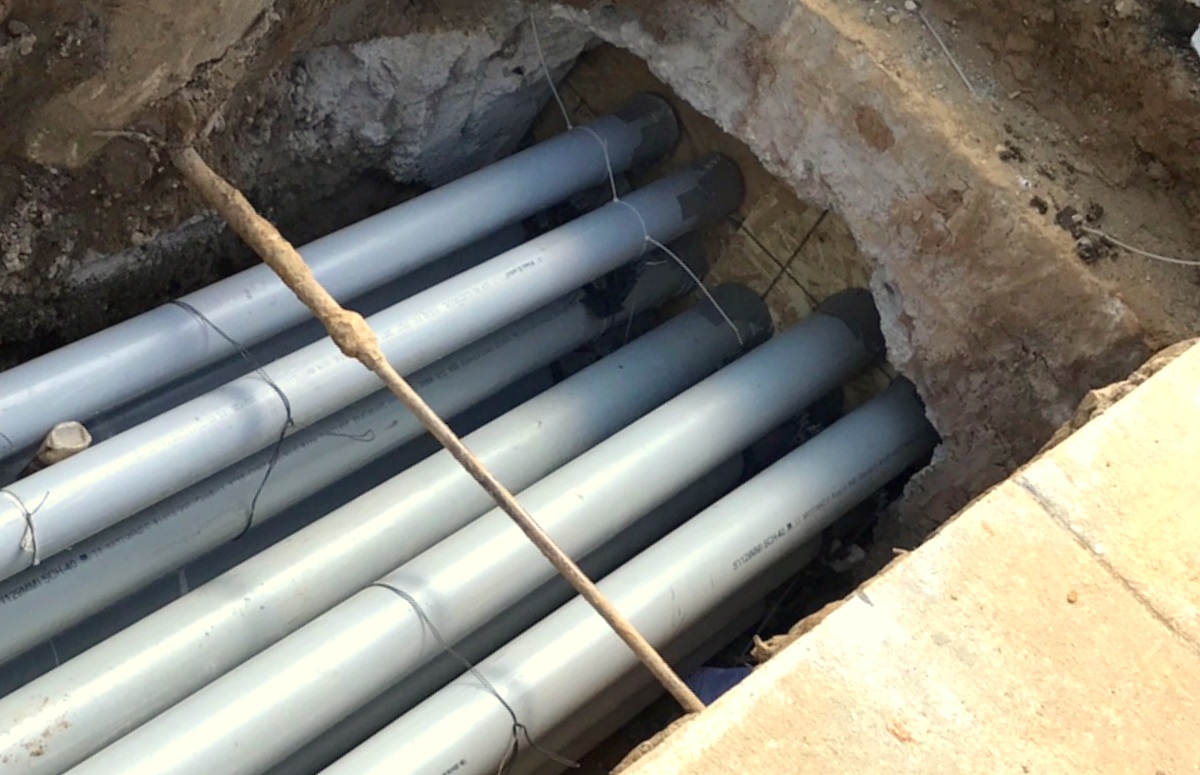 Close-up of a conduit that carries electric, telephone and fiber-optic cables below Baltimore’s  streets and sidewalks. (Mark Reutter)

As conduit manager, Zaied is responsible for coordinating repairs, upgrades and expansion of the duct network with DOT and other agencies.

Much of the work consists of repairing manhole “chimney-top” slabs, fixing damaged duct banks and installing equipment to thwart “outside parties” from gaining illegal entry to the conduits in order to drain off electric power or plug into fiber-optic lines.

DOT admitted last week that the city-wide conduit overhaul, presented to the Board of Estimates in 2016 as a $26 million project, could wind up costing $100 million.

Sources tell The Brew that Tri-Venture does not have enough skilled workers to do the repairs required by the project and has relied on outside firms to complete some of the work.

DOT officials have not responded to questions about how much construction work Tri-Venture has “self-performed” and whether it is meeting its minority business and women’s business hiring goals.