Artscape has a number of new events and activities this year, but local musician Drew Rieger is more concerned about what won’t be there.

Rieger recited his list earlier this week during a meeting of the Mount Vernon Belvedere Association, in which he stood up and asked if neighborhood groups have any say in the lineup from year to year.

“How can they say it’s Artscape and not have the classical arts?” he asked.

The Maryland Institute College of Art has opened its doors to Artscape every year since the first festival in 1982.

But events coordinator Randy Hadaway confirms that MICA will have a greatly reduced presence this year, with buildings usually open to the public during Artscape closed this year. They include the Brown Center, Fox Building, Bunting Building, Main Building and the Fred Lazarus IV Center on North Avenue.

Only the Mount Royal Station will be a center of activity, he said, and that’s because one of Artscape’s main stages is in the dell there.

Hadaway said he’s been getting calls from people who usually go to Artscape and want to know what they’ll see at MICA this year. He said he has to tell them there’s been a change in plans.

“It’s the new Artscape,” he said. “What it is from now on is going to be different what what it has been in previous years.”

Historic Corpus Christi Church, which has opened its doors for organ recitals during Artscape for years, won’t be involved either, according to its pastor, Father Marty Demek.

What was the reason for the church’s decision to not participate this year, Demek was asked.

“Let’s just say it was the because of the decision to change the boundaries of Artscape,” he said. 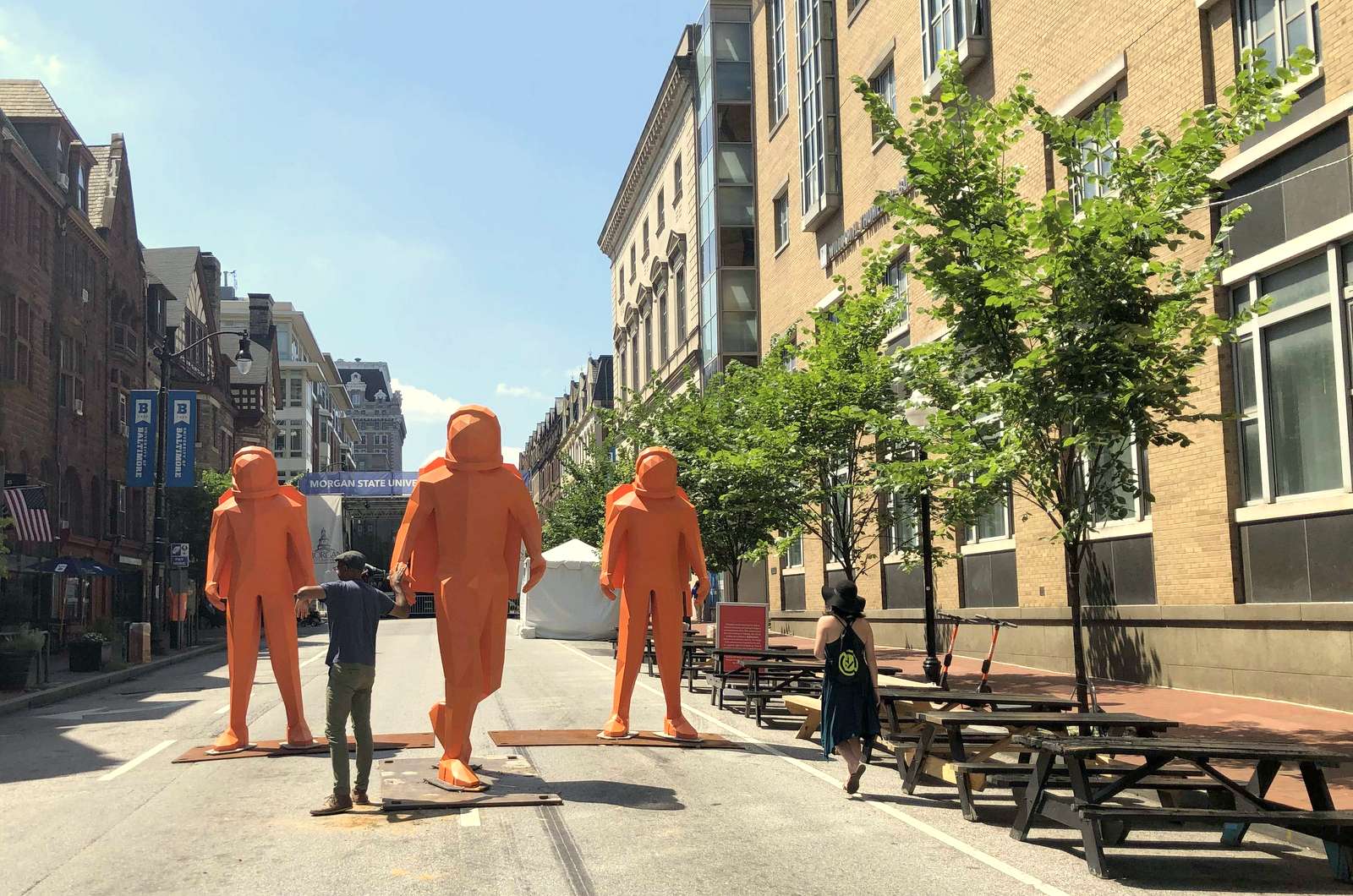 Billed as America’s largest free arts festival, Artscape draws more than 350,000 visitors every year. Its theme this year is Discover, a nod to the 50th anniversary of the Apollo 11 space launch and man’s first walk on the moon.

It also marks the first full year of the festival’s leadership under Donna Drew Sawyer, who replaced Bill Gilmore as executive director of Baltimore Office of Promotion and the Arts (BOPA), the quasi-public agency that produces the event.

As Artscape opens tonight for a three-day run, there has been plenty of talk about its rejiggered boundaries, traffic detours, disrupted Light Rail service due to a water main break, and predicted high temperatures.

But there’s another kind of heat coming from some longtime participants who find themselves outside the new boundaries this year, literally and figuratively – and aren’t happy about it.

They look at this year’s lineup and say they are concerned about changes in programming, not just geography.

Kathy Hornig, BOPA’s chief operating officer and festivals director, says the agency has tried this year to put together a festival that reflects the broad range of artistic talent in Baltimore and beyond. But receiving many more applications than they could accept, officials had to draw the line.

“We have to have a selection process, and we receive many more applications than are selected, “Hornig said. “We can’t say yes to everyone.”

It is also important to showcase new talent, explaining, “Part of the process is that we try to mix it up each year and have new talent and new entertainers and give new artists a chance to be part of Artscape.”

One of the rejected applicants was James Harp, artistic director of the Maryland Opera and longtime organist and choir director at St. Mark’s Lutheran Church.

He said this is the first time in 25 years that he applied and wasn’t accepted.

Harp said he applied this year on February 19, or 12 days before the March 1 deadline. He proposed a one-hour performance, titled “MORE Opera on Demand,” in which three professional opera singers join with the student-aged Maryland Opera Campers to develop a list of arias and ensembles they’re prepared to sing. The audience gets to vote on the spot to determine which ones they’ll perform.

“This program was so successful last year we wish to bring it back,” he wrote in the application, asking for performance times on Saturday at 2 p.m. and 5 p.m.

All he got back was an emailed rejection from BOPA’s Festivals Programming Coordinator. “After careful review we are unable to host your performance at Artscape,” the email said. “Please do apply again in the future.” 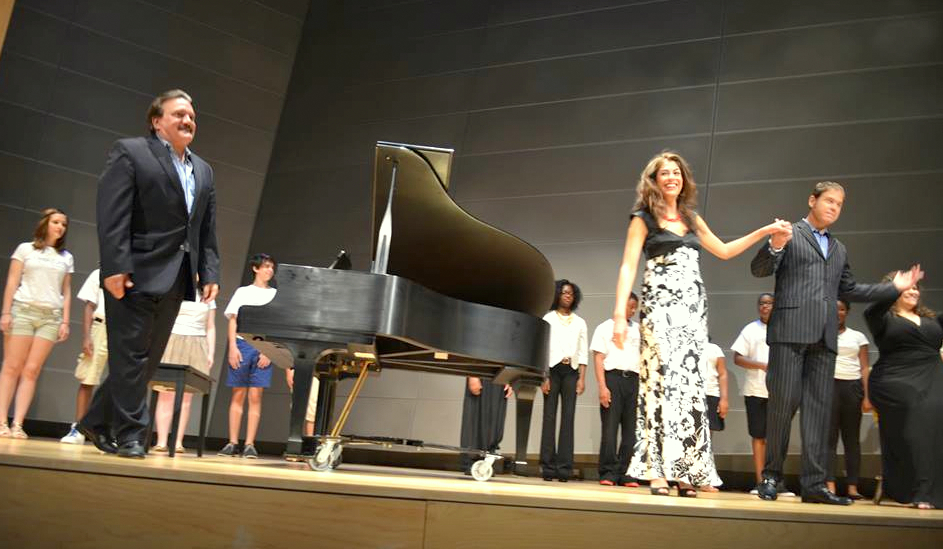 Harp said he was particularly mystified when he later looked at this year’s performing lineup for The Lyric and saw that five prime slots on Saturday were given to the same performer.

Harp said his group would have been delighted to fill just one of his slots. He said he has continued to write to BOPA, as recently as last week, to let them know his group was available on short notice to fill any last minute openings.

“We didn’t hear back,” he said.  “We [have] established a large, loyal audience over decades, 25 years. We have incredible young kids who were going to be part of it this year. I don’t know of any other group that’s performed 25 years.”

Besides feeling bad that his group can’t perform, Harp said, he is concerned about the general absence of classical music at Artscape this year, recalling a time when the Baltimore Opera Company and the Maryland Symphony Orchestra performed Porgy and Bess on the main stage at Mount Royal Station – one of the headliners that year.

“I’m concerned that there is no traditional opera,” he said. Without it, “it just doesn’t reflect the true diversity that is Baltimore, and that is what Artscape should be.” 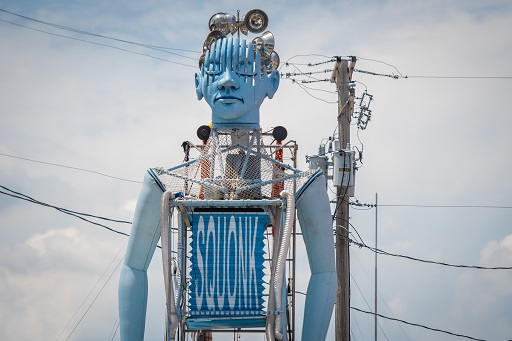 Figure from Pittsburgh’s Squonk Opera, which describes itself as a “wacky” company that attempts to present a form of opera that’s accessible to everyone. (Artscape 2019)

Hornig acknowledged that Harp and the Maryland Opera weren’t invited this year.

“Mr. Harp did apply, but we decided not to feature them and instead open it up to new things,” she said. “It doesn’t mean that we don’t love them and want them to come back.”

Asked about the lack of classical music offerings in general, Hornig said Artscape was expecting to have two performances by the Baltimore Symphony Orchestra at the Meyerhoff concert hall.

But when the orchestra’s summer performances were cancelled because of financial constraints and the ongoing lockout of musicians, she said, those performances had to be scratched, and the concert hall won’t open if the symphony isn’t performing.

“That was something that was independent of BOPA,” she said.

Rieger, a composer, musician and Maryland Opera board member, said he believes the symphony lockout is all the more reason why Artscape’s planners should have been proactive about signing up other classical music performers to fill the void.

“Visionaries would have taken the [Baltimore Symphony’s] current crisis as ‘cause celebre’ for this year’s Artscape.”  – Drew Rieger.

“Artscape is supposed to be a platform for the arts” he said. “Classical music is going through an international crisis right now. Here is a chance to showcase it and give it exposure.”

Given the BSO’s founding in 1916 as a branch of city government and the Meyerhoff’s proximity to the festival grounds, he said, he thought BOPA might have done more to use Artscape to celebrate Baltimore’s symphony orchestra, especially this year. Instead, the BSO ticket office won’t even be open during Artscape.

“It seems to me that promoting it, especially when the Meyerhoff is a linchpin leg of the Artscape route, should be a priority for BOPA,” Rieger said. “Visionaries would have taken the [Baltimore Symphony’s] current crisis as ‘cause celebre’ for this year’s Artscape.”

Rieger also said he believes Artscape’s planners need to engage the Mount Vernon community more in their planning, “since we are in essence the co-hosts with Station North and Mount Royal.”

He noted that Mount Vernon is “the de-facto classical arts neighborhood  by virtue of the fact that the Walters, Peabody, Meyerhoff, Lyric, Center Stage and Baltimore School for the Arts all lay in our boundaries, and many MICA associates live here as well.”

But according its president, he said, the community association was not contacted regarding the festival by BOPA.

Hornig said classical music and ballet will be represented this year by a local group called Afro House and by Andrew Oswinkle, a strolling performer who plays classical guitar.

She noted that there will also be performances by the Baltimore Rock Opera Society and an interdisciplinary group from Pittsburgh called Squonk Opera, which describes itself as a “wacky, provincial” company that attempts to present a form of opera that’s accessible to everyone.

Afro House describes itself as a “disruptive” music group that’s based in Baltimore, but “has roots all over” and performs in a range of genres.

“They are very creative and they do wonderful things, but I look at their website and the word opera doesn’t even appear one time.”

Harp says it might have been illuminating to schedule side by side performances featuring Maryland Opera, with its classical approach, and Afro House, with its futuristic approach.

“Wouldn’t it be wonderful to have Afro House and the Maryland Opera side by side?” Harp asked. “That would show traditional opera and the opera of the future. It would be perfect.”

Asked about the near-complete absence of MICA this year, Hornig said, it is due to the combination of the Fox Building undergoing renovation and the new bike lane along Mount Royal made it difficult for vendors to be located there.

“My understanding of how that all happened is that MICA told us pretty early in the year that the Fox Building would be under construction and not available, so as we were making our pros and cons list of where to take the festival footprint. . . that influenced our decision to shift the activities elsewhere.”

“MICA supports BOPA’s decision to consider shifts in Artscape’s content and scope in order to ensure and showcase the geographic and programmatic diversity that we are so fortunate to have here in Baltimore.”

It wasn’t MICA’s decision to lessen its participation in Artscape this year, a spokesperson says.

Rubino earlier told The Brew that MICA’s leaders would be pleased if BOPA wanted to include the college more in future years. She said it wasn’t MICA’s decision to lessen its participation in Artscape this year.

“If they want to come back, we would be happy to work with them,” Rubino said.

“Who knows?” Hornig said. “We’ve got to see how this year goes. The bike lane will still be there.”

BOPA: Open to Everyone

In response to Rieger’s question about community participation in programming, Hornig said BOPA relies on juries to select some artists and performers for Artscape, and makes other decisions in-house.

“We always have an open call” for applications, she said. “The process is open to everyone, starting at the beginning of the year.”

Hornig has a long list of offerings that she’s enthusiastic about this year. They include the relocated Artists’ Market on Charles Street (“more condensed and intense” than before); Radiant Flux by Kevin Blackstone, (an interactive sculpture that explores light through solar reflection and lunar moonbeams); the popular kinetic Octopus sculpture from last year’s Light City by Tim Scofield, Kyle Miller and Steve Dalenkoff; the Sydmonauts by Amigo & Amigo; nine astronaut-themed works of art from Australia appearing in the U.S. for the first time; the Artist Books, Prints, Multiples and Editions Fair in the Charles Street Garage; and Artscape After Hours in Station North.

With so much available, Hornig disputes any suggestion that the arts are missing from Artscape.

“At the end of the day, Artscape is a good party,” she said. “There’s plenty of art to keep you busy all weekend long.”