After causing a community uproar by razing two historic stone houses that residents thought were to be incorporated into a new apartment complex, developer Katherine Jennings is seeking to raze two more structures in Woodberry to make room for more apartments.

Jennings is a principal of Rockrose View LLC, a group that has applied for permits to build a four-level, 12-unit apartment complex at 2080 Rockrose Avenue.

The land is currently occupied by a one-story building and a garage that would be torn down to make way for the apartments, according to plans on file with the city. It’s almost directly beneath one of the towers on Television Hill used by TV and radio stations for broadcasting.

Several residents and preservationists, alarmed by the surprise demolition of the stone houses and highly critical of the plans for their replacement, say Jennings and her team shouldn’t be granted permits to develop other properties.

“Katherine Jennings’ frontman Chris Mfume – she never attends Woodberry presentations – has lied to our faces before. So why should we believe or trust them again?” said Jill Orlov, a Clipper Road resident who witnessed the destruction of the historic houses.

“They purposefully broke laws, knowing the city’s penalties would only be pocket change for them,” Orlov said. “They broke the trust of our local community and the trust of our councilman and the Housing Department.”

“They purposefully broke laws, knowing the city’s penalties would only be pocket change for them.”  – Jill Orlov.

Speaking more broadly, Johns Hopkins, executive director of Baltimore Heritage, recommends a moratorium on all demolition in Woodberry while the neighborhood decides whether to become a historic district – a move that gained momentum in the wake of the stone house razings.

“There are cases of property owners trying to jump the gun and tear down buildings before the historic designation, and that is a problem,” Hopkins said. 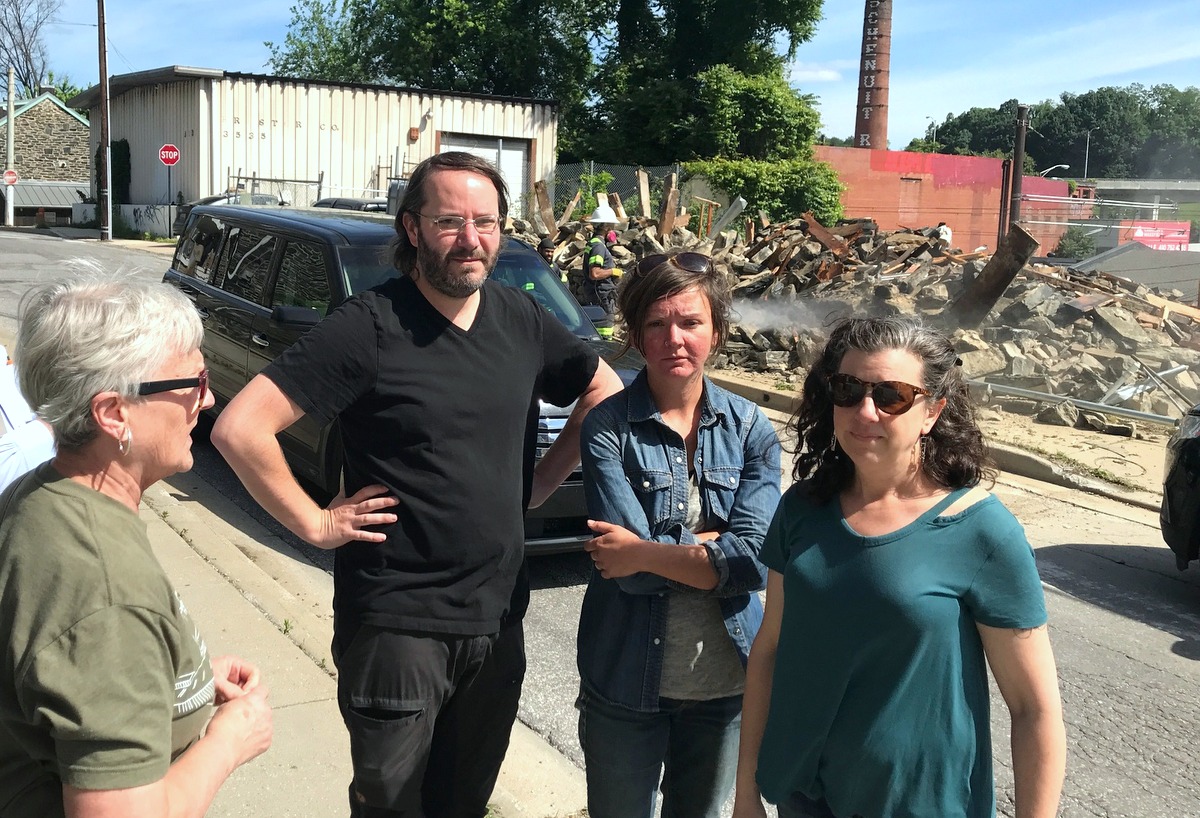 Jill Orlov (right) and other residents stand across the street from where the historic stone houses were being torn down on May 21, 2019. (Mark Reutter)

In her latest project, Jennings had been working with Chris Mfume, the son of former congressman Kweisi Mfume and the person who had represented Jennings in community forums about Woodberry Station.

Mfume says he is no longer involved in either the Rockrose or Woodberry projects.

“I represented Katherine at meetings early on, trying to help out and use my community expertise. But I am not involved anymore in Rockrose or Woodberry, period.”

Also part of the Rockrose project is Kevin Johnson, the plugged-in contractor whose Commercial Group has been the subject of many Brew stories (here, here, here and here).

Elevation drawing of the proposed Rockrose building, which would rise 45 feet above the sloping east side of the 14,250-square-foot lot. (BMZA)

The project is a sign that Jennings is emerging from the shadow of her ex-husband, Larry E. Jennings Jr., who controls at least four parcels around Woodberry and is proposing large-scale developments there.

Both of the Jennings have identified the community as an area ripe for redevelopment, now that the hot real estate market in Hampden has spilled across the Jones Falls.

Both of the Jennings have identified Woodberry as an area ripe for redevelopment.

The onetime textile mill and manufacturing hub has fewer restrictions than a designated historic district, which adds a layer of design review and protection against demolition.

What’s more, its classification under new zoning laws as a Transit Oriented Development encourages higher density residential construction, including “micro” apartments that would range in size from 350 to 450 square feet. 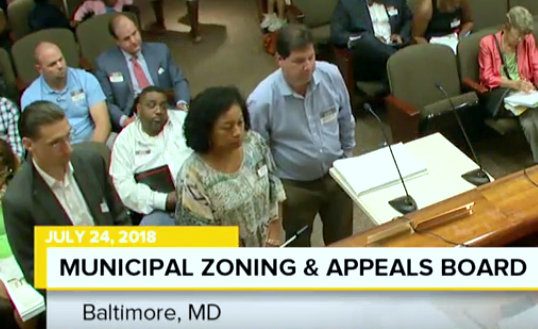 Katherine Jennings appeared, but did not speak, at a zoning board hearing last July. Michael Burton, at right, requested two more apartment units than allowed by the city code. The request was granted. (Charm TV)

Katherine Jennings did not respond to a request for information, but Michael Burton, of Urban Design Group, outlined her plans at a hearing of the Board of Municipal and Zoning Appeals on July 24, 2018.

They call for three apartments on each of four levels, with the main entrance on the west side of the building and balconies for apartments facing east.

The developers needed a waiver from the BMZA because the amount of land at 2080 Rockrose is 14,250 square feet. The city zoning code requires 1,500 square feet of land per dwelling – or 18,000 square feet in order to build 12 units.

The Jennings group requested 12 units, Burton said, because they have to construct a large basement on the site as a result of the land’s steep slope, and they proposed putting residences on that level.

The zoning code requires one parking space per unit, or 12 for a 12-unit building. The Jennings group offered to provide 10 parking spaces, plus one handicap-accessible space for a van, and the zoning board agreed. 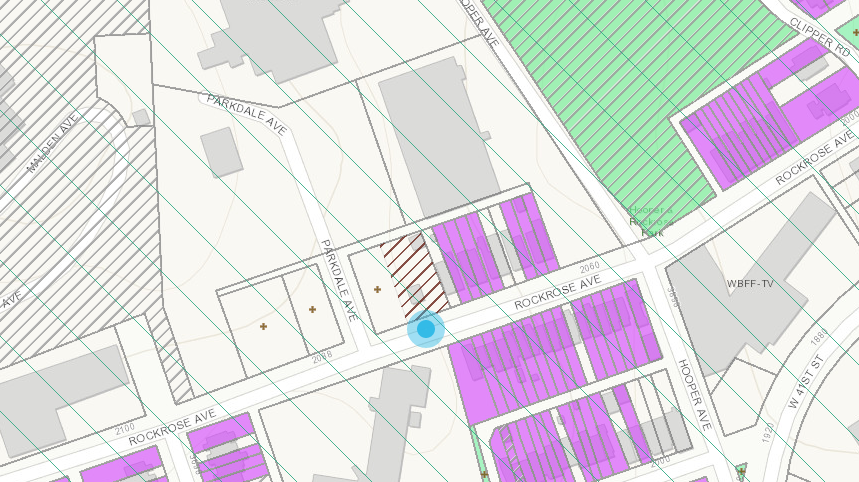 Location of the planned apartment building (blue dot) on Television Hill in Woodberry. (Department of Housing and Community Development)

In May, Jennings’ Sardelli Realty LLC secured a $2.2 million loan from Revere Bank by pledging future rents and leases at the Rockrose property. Jennings originally purchased the property for $140,000.

Sheri Higgins, president of the Woodberry Community Association, said in a 2018 letter to the BMZA that the community association supported Jennings’ project.

“Having satisfied concerns and responded to a follow-up question regarding on street parking for the apartment complex, the Woodberry Community Association, on behalf of residents in the affected area, can offer support for the proposed complex of 12 units with 10 on-site parking spots,” she wrote. 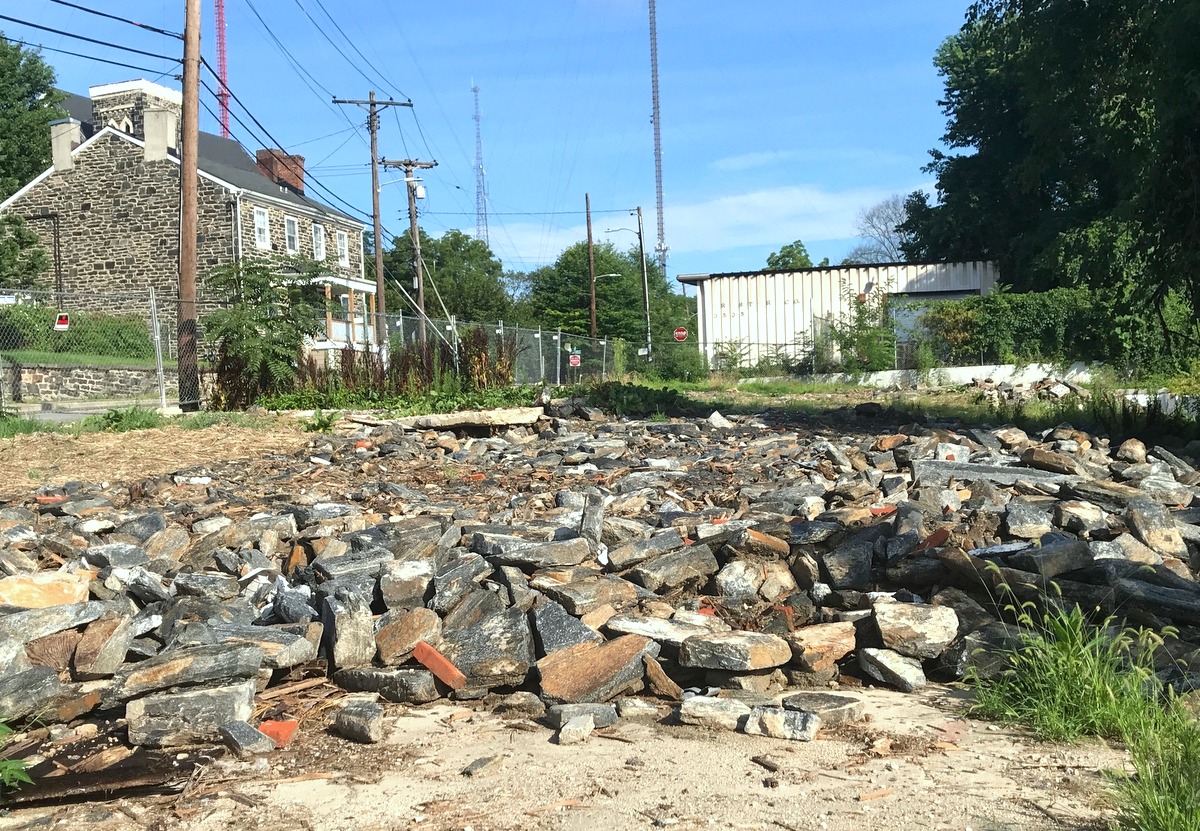 Site on Clipper Road where the stone houses were leveled after Jennings’ LLC had promised to incorporate the structures into an apartment building. (Mark Reutter)

Johnson’s group was also named as a candidate to build another Valstone development, a 30-unit complex proposed at the Poole and Hunt parking lot at 2001 Druid Park Drive.

The latter project has been questioned by attorney John Murphy, who says it consists of “faux” townhomes – or buildings designed to look like rowhouses but would actually accommodate multiple families.

Murphy has called on Planning Director Chris Ryer to review the Valstone project, describing it as “an obvious evasion of the code’s distinction between attached single-family houses and multi-family structures.”