While she was on vacation last month, Seema Shah-Nelson received a disturbing text from the person who was keeping an eye on her house in Mt. Washington.

The text said that someone from the city had come to her door and said she would be assessed a $500 fine “if I don’t take down my Ervin campaign sign on my front lawn,” Shah-Nelson said.

“My mind immediately went to Yitzy,” she said, referring to Isaac “Yitzy” Schleifer, the incumbent 5th District councilman that her preferred candidate, Christopher Ervin, is hoping to unseat in the April 2020 Democratic Primary.

“It really pissed me off. I said, ‘This can’t be true,’” said Shah-Nelson, who soon discovered that other Ervin supporters were also being told that their signs were illegal.

Laura Rashkin said a woman with a city employee photo ID on her blue polo shirt came to her Mt. Washington house with the same warning about her Ervin lawn sign.

“It felt very pointed to Ervin,” Rashkin said. “We had kept our Obama and Stinnett and Jealous yard signs up for long times.”

Shah-Nelson began emailing city agencies as well as contacting the ACLU of Maryland. What she learned only deepened her suspicions:

• The paper the person had brandished to her house sitter was not a citation, but a printout of a 311 service request. And the part about the $500 fine had been typed in.

• There is a city ordinance prohibiting campaign signs on private property earlier than 45 days before an election. But that ordinance was deemed unconstitutional and has not been enforced for years.

Why would a city employee hand-deliver a warning based on an out-of-date law?

“The particular violation language was removed from the citation dropdown box in 2008 when the decision on [a similar] Baltimore County law was made by the courts,” deputy housing commissioner Jason Hessler explained in an email to City Solicitor Andre M. Davis.

Hessler said the incident had caused people to “spread misinformation and various conspiracies,” and he recommended to Davis that the city strike the outdated language from the books.

Shah-Nelson, meanwhile, wondered why a city employee would visit her house to hand-deliver a warning based on an out-of-date law.

She soon discovered from 311 records that eight other people in her neighborhood had received complaints about their lawn signs, all of them signs for Ervin.

“This was complete intimidation,” concluded Shah-Nelson, who has since put her Erwin sign back up.

Schleifer has not returned repeated phone calls from The Brew seeking comment. 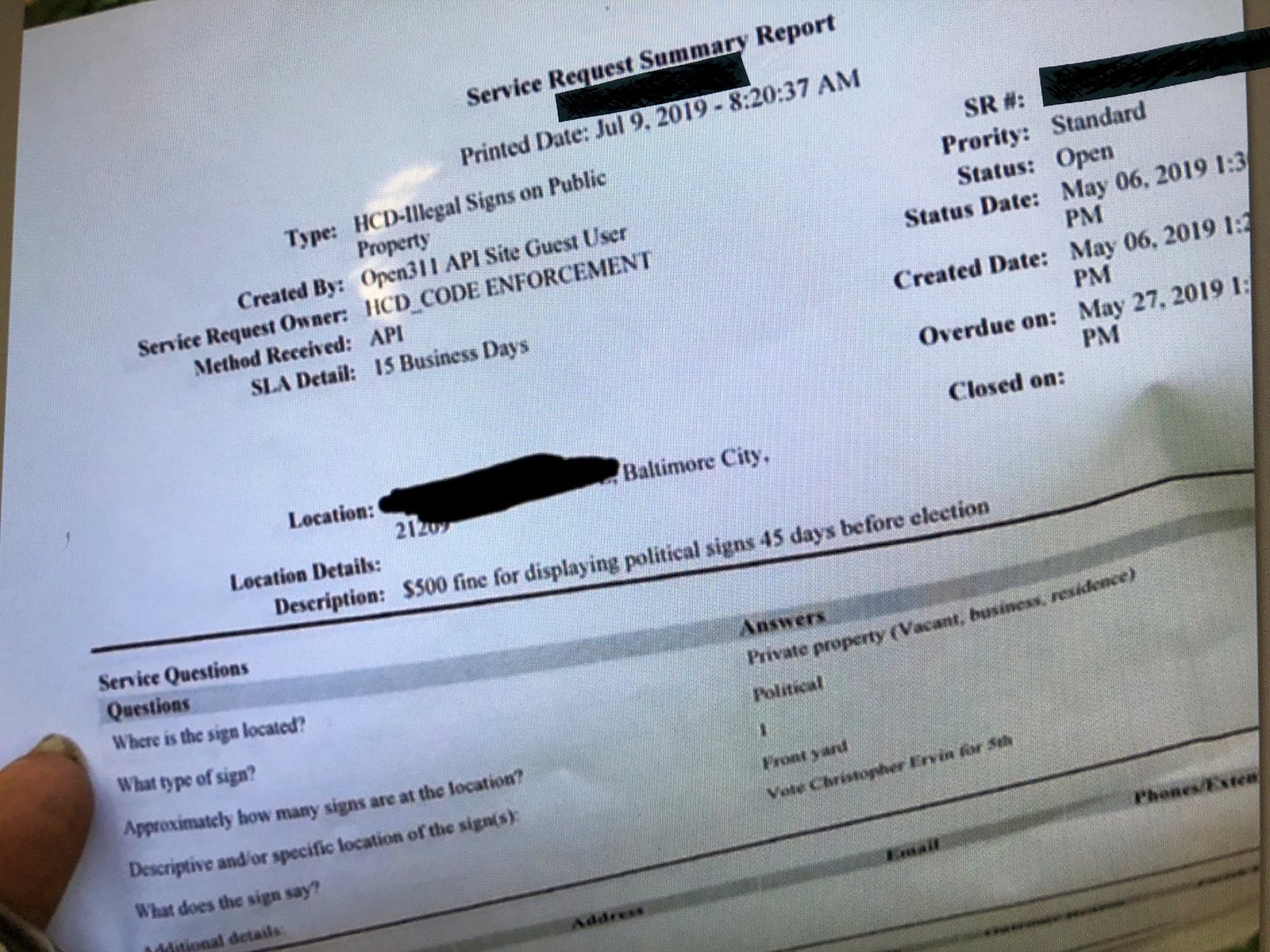 Seema Shah-Nelson says someone who identified themselves as a Baltimore Housing Department employee dropped off this complaint at her house. (Facebook)

So who was the anonymous person who made the law sign complaints?

On the Baltimore Voters Facebook page, several commenters pointed a finger at a Schleifer supporter, Desmond Stinnie, whose technology company provides service to customers that include political candidates.

Stinnie had complained – publicly and specifically – about the legality of Ervin campaign signs in the following exchange: 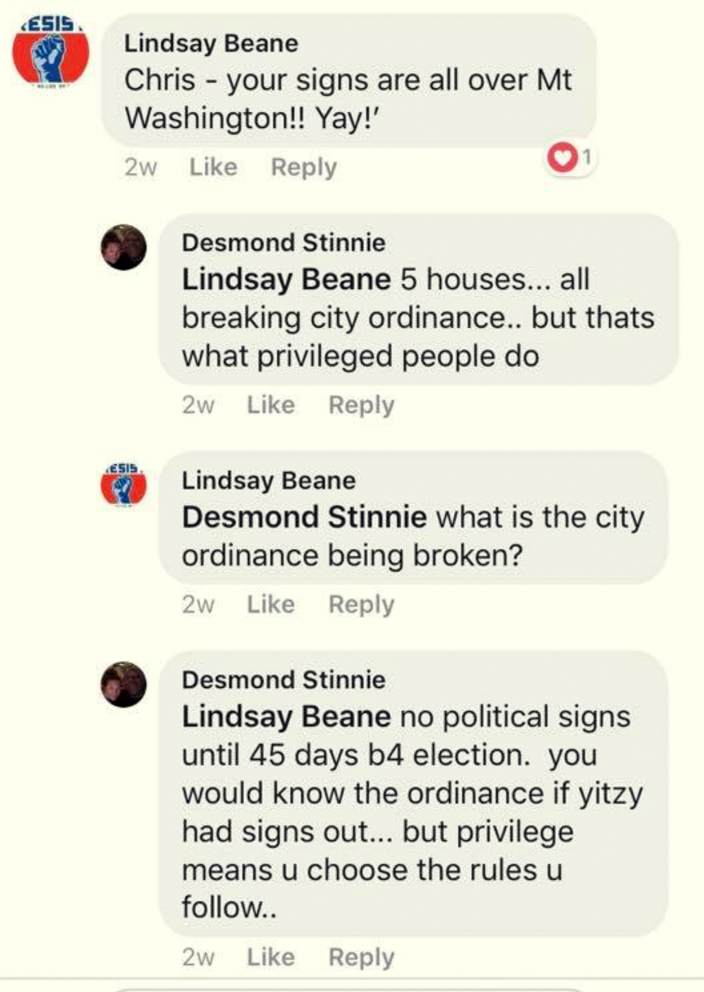 What ordinance, Stinnie was asked in the Facebook exchange, was being broken?

“No political signs until 45 days b4 election,” he chided. “You would know the ordinance if Yitzy had signs out.”

Speaking with The Brew, Stinnie acknowledged those were his comments, but denied any involvement in the 311 complaints against Shah-Nelson and other residents. He said he had no knowledge of city workers’ visits to Ervin supporters.

The controversy is playing out in a corner of the city where distinct African-American and Orthodox Jewish communities have sought to co-exist, but where tensions have historically flared.

“I did post on Facebook that I believed there was an ordinance that said signs can’t go up more than 45 days before an election,” he said.

As far as making a 311 complaint, “that’s not something I would involve myself in,” he said. “I would have no intention or reason to.”

Asked if he does paid work for Schleifer or his political committee, Stinnie replied, “I’ve never worked for any candidate that has run in the 5th District.”

Stinnie, one of his companies and his wife, Colleen Geisen, have contributed at least $2,000 to Schleifer’s campaign between January 2016 and December, 2018, Maryland Elections Board records show.

The couple served as co-sponsors of a December 2018 fundraiser for Schleifer held at Pimlico Racecourse.

Arguably the most prolific online critic of Ervin, Stinnie says he is solely motivated by his concern for the northwest district where he and his family live.

“I’ve looked at both candidates and determined [Schleifer] is the better one,” he said. 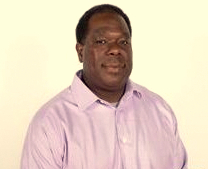 Stinnie is listed in an online resume as president of Opulent Cloud.

A previous company he owned called Political Boost, LLC was forfeited in 2012, according to records on file with the state. Among other election-related services, it provided robocalls, online dialing, political calling, GOTV and “political yard signs.”

Stinnie was also involved in former mayor Catherine Pugh’s formation of the “Healthy Holly” brand. (Pugh’s undisclosed sale of Healthy Holly children’s books to entities that do business with the city and state led to her resignation in April and to multiple ongoing corruption investigations.)

An early iteration of Pugh’s Healthy Holly Company was registered in Stinnie’s name – only to be forfeited the next year for failure to file property tax returns.

Despite what Stinnie says about his recent activities, Ervin regards him as a Schleifer surrogate.

“Let’s have a debate on the issues, instead of all these personal attacks by proxies,” the Howard Park resident said.

The rancor over lawn signs has ratcheted up friction in a contest featuring a challenger with relatively meager financial resources.

The most recent finance report for Ervin is an affidavit saying he had not raised or spent more than $1,000 since he unsuccessfully ran against Schleifer in 2016.

Schleifer’s fundraising has continued with a “Birthday Party” fundraiser at Cylburn Arboretum last April. Basic tickets were $30, but a Whole Life Sponsor could donate $3,000 and a top-tier League of Their Own contributor could kick in $6,000. 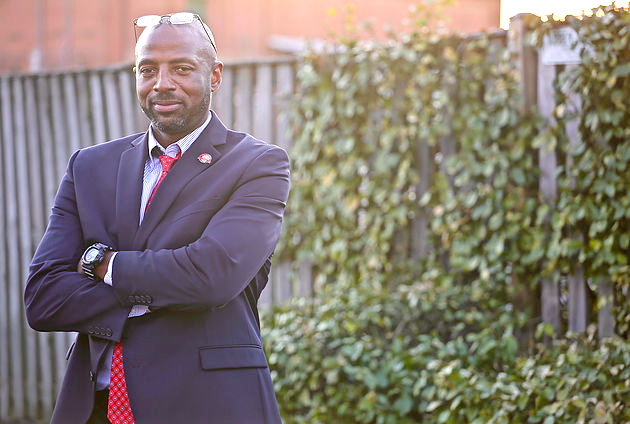 The race is playing out in a corner of the city where distinct African-American and Orthodox Jewish communities have sought to co-exist, but where tensions have historically flared.

The piece accused Schleifer, the first Orthodox member of the City Council in decades, and then-House of Delegates candidate Dalya Attar of deploying divisive, “fear-mongering” Republican rhetoric on crime.

The essay drew praise in some quarters and sharp criticism in others.

Ervin, a 51-year-old former sanitation worker and community advocate, has been using social media energetically since 2016 to keep his name, his issues and his critique of the incumbent in the public eye.

Charged during the 1990s with car theft, drugs, and illegal gun possession, Ervin did time in prison. That experience, he says, led to his commitment to criminal justice reform.

He founded Lazarus Rite, a nonprofit that helps returning citizens get Class B commercial drivers licenses. He also has worked to reinstate voting rights for Maryland citizens with non-violent felony convictions.

The Council’s youngest member, Schleifer, is a co-founder of an online fundraising company, Raffle Ready.

During his first year in office, he came under fire for his links to the private patrol group Shomrim and for intervening with Pugh to secure a $50,000 Chevy Tahoe for the group using public slots funds.

The councilman also drew fire for his support of an apartment complex at Falls Road and Northern Parkway proposed by Blue Ocean developer Jonathan Ehrenfeld, a major campaign contributor.

Favoring mandatory minimums and other tough-on-crime measures, Schleifer released an unscientific poll of city police officers indicating they were “afraid” to enforce the federal consent decree.

His profile has risen since Brandon Scott took over the Council president’s office. Scott appointed him chairman of the Public Safety Committee as well as co-chair of a cybersecurity committee formed after the May ransomware attack. 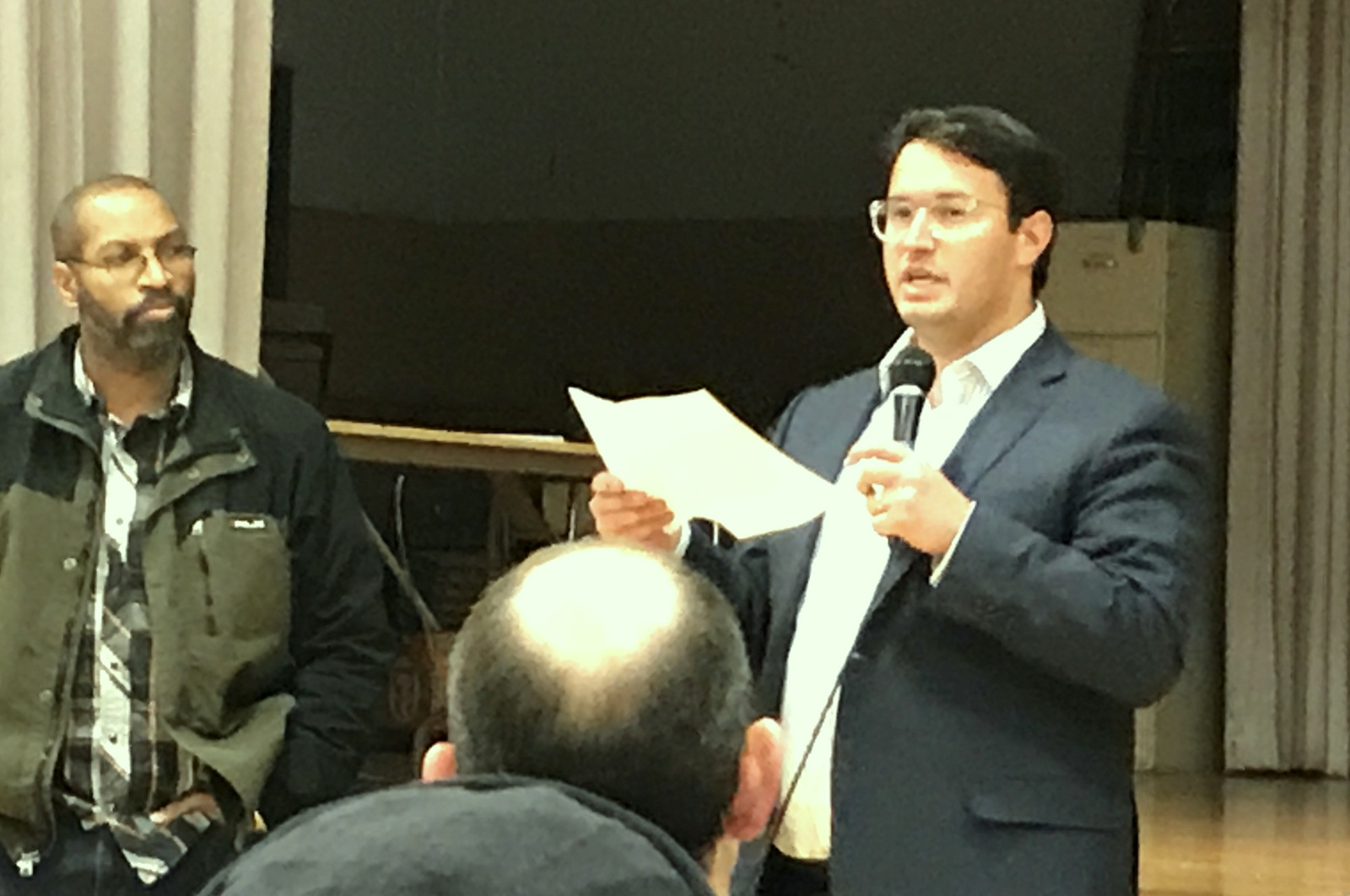 “He put me through hell”

Meanwhile, run-ins between Stinnie and Ervin backers pre-date the controversy over political signs.

Several Ervin supporters told The Brew about complaints by Stinnie to their employers and professional disciplinary bodies over what they considered relatively innocuous Facebook comments and “likes.”

“He put me through hell for, like, a year,” one woman said, declining to be identified or release details because she said she is “contemplating legal action.” Another declined to speak about what happened, fearing more calls and emails to her supervisor.

Stinnie acknowledged making those complaints and said they were justified. “To call me a stalker was an attempt to label me as a dangerous person. I’m not a henchman, I’m not a stalker,” he said, adding:

“Someone should be reprimanded for falsely accusing me.”

Shah-Nelson may have her sign back up on the lawn and clarified its constitutional right to be there, but she does not consider the mystery solved.

Why, she said, were city workers suddenly enforcing an extinct ordinance? Who authorized it?

The housing department’s Hessler explained this enforcement action this way:

“Normally, all sign-related SRs [service requests] are handled by DHCD’s Special Investigation Unit SIU, but it appears that in the upgrade to the new 311 system this SR is automatically routed to the Housing Inspector for the assigned district.”

Meanwhile, legislation has been introduced to strike the old lawn sign restriction from the books.

In a twist that Ervin called “ironic,” the sponsor of Bill 19-0432 is Schleifer, who explained at last week’s Council lunch why the lawn sign language needs to be taken out.

“Some of my constituents,” he said, “feel it restricts free political speech.”