Cars were backed up for a block at the entrance to the Sisson Street Citizen Drop-off Center today, the first day under a new policy that suspends recycling collections in Baltimore until November 1.

The city workers directing traffic at the scene were cheerful (“Pull right over there by that red car, young lady!”), but the rules they were observing did not match those on the Department of Public Works website.

Citizens may bring recyclables in pick-up trucks, whether private or rented from U-Haul, the employees said, but box trucks could not be used.

“No box trucks,” a man in an orange DPW t-shirt said, when asked the policy on this type of truck during the recycling suspension.

What about “walk-ins,” or people bringing recyclables in on foot?

“Nope. That’s against the rules,” he answered, explaining, “It’s a safety issue.”

Online, though, the agency was tweeting a link to its web page that said just the opposite:

“Note: Box trucks that have collected neighborhood recycling will be allowed to use the Sisson Street drop-off location at 2840 Sisson Street. Walk-ins with recycling are welcome!”

“At Sisson Street, walk-ins are welcome and box trucks are too,” she said in an email.

“In fact, the Solid Waste Bureau head [John Chalmers] is stopping by the Sisson Street yard to reiterate this information to the staff,” she added. 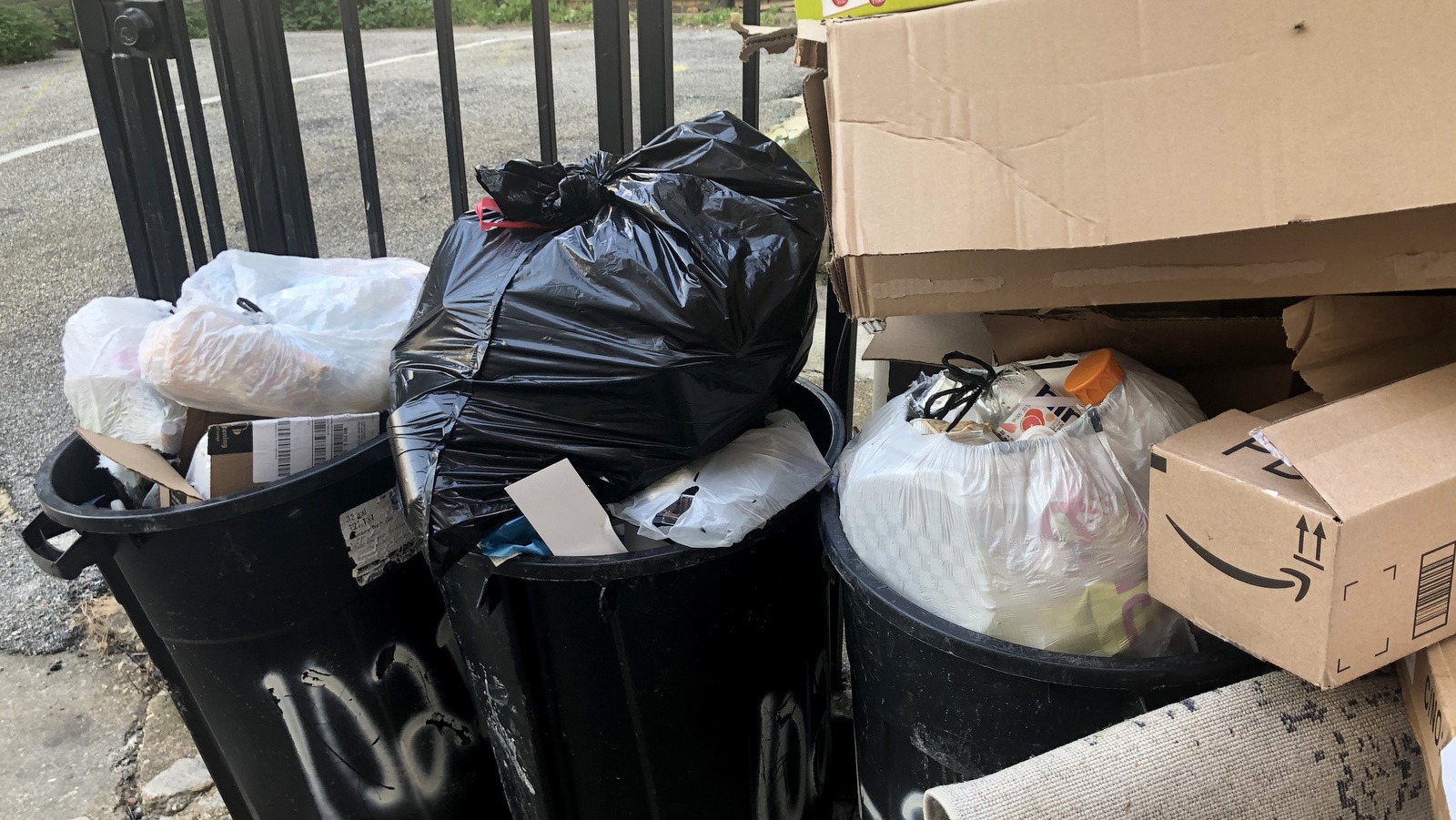 This pile of trash in Mt. Vernon last week had both a distinct odor and a swarm of flies. (Fern Shen)

Drop-off centers have been set up in each of the 14 Council districts, he said, announcing locations and hours during which citizens could drop off recyclable materials themselves.

But many have expressed frustration that DPW is unable to respond better to staffing issues related to a pandemic that began five months ago.

“While COVID-19 has created unprecedented challenges for our city, it is unacceptable for us to be at this point, Council President Brandon Scott said in a letter to Garbark that was released to the media. 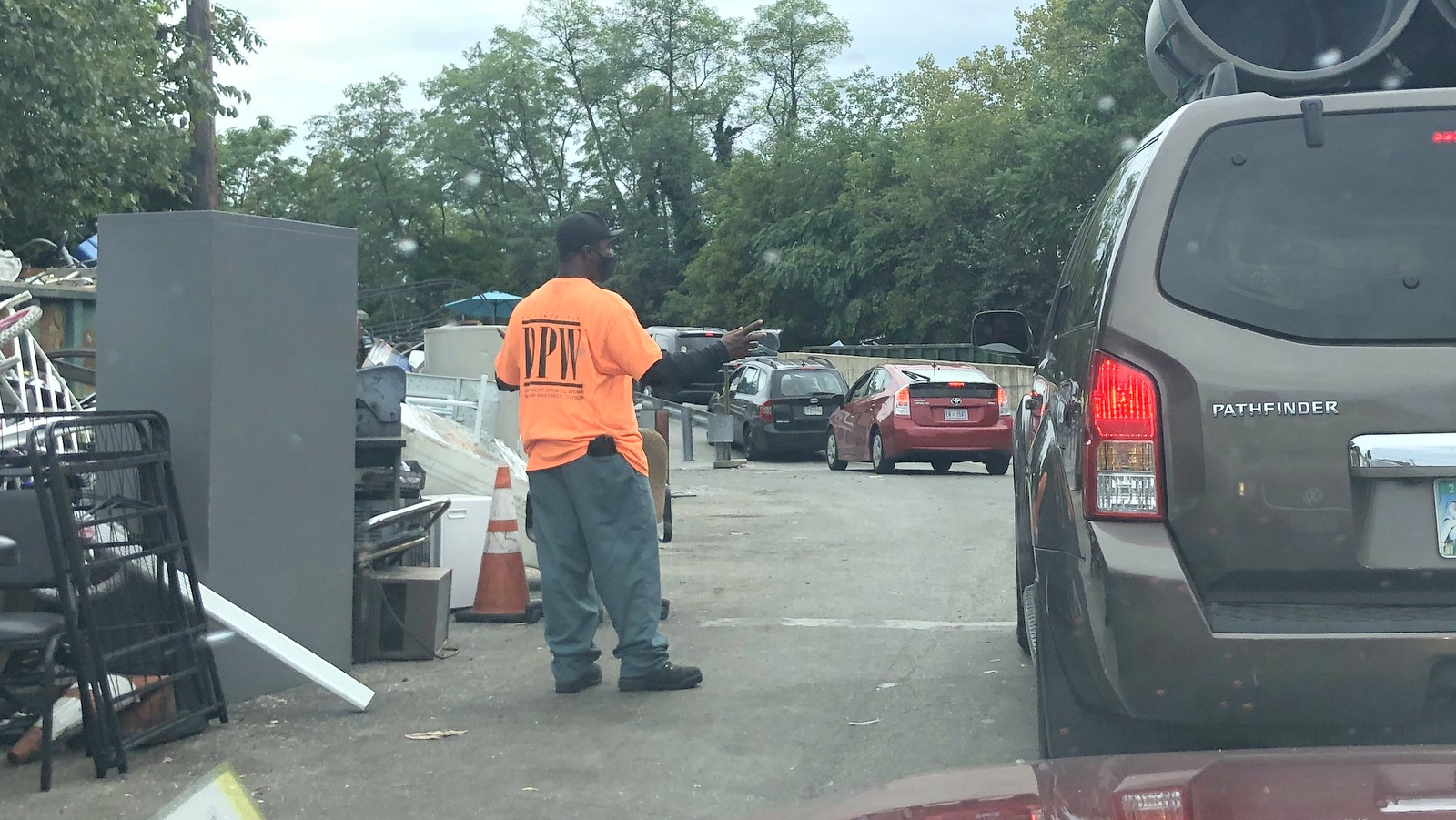 Trash has been piling up along city streets and alleys as a result of a previous suspension of recycling services in June following a Covid-19 outbreak among workers. Since then, as crews struggled to keep up with the backlog, service has been haphazard.

“More must be done to ensure seniors, people with disabilities, and people without personal vehicles can access basic city services,” Scott wrote.

He has summoned DPW officials to a Council hearing on Sept. 15 to discuss the impact of COVID-19 on basic trash and recycling services. On the letter he called on Garbark to take a number of actions as soon as possible to better serve citizens:

• Better prioritize 311 requests to serve residents who have been consistently missed.

•  Increase the number of drop-off sites in each district, with a focus on densely- populated neighborhoods where access to vehicles is low.

•  Engage in consistent, proactive communication with neighborhoods and clearly establish a point of contact for citizens and elected officials.

Scott said he will also ask:

• What alternatives did DPW consider before implementing this plan, such as moving to bi-weekly recycling collection first, hiring temporary or other workers or working with private contractors?

• Did DPW consider redirecting workers from other units to temporarily fill the shortage in workers?

• Do frontline employees have the necessary PPE to do their jobs safely?

• What impact has COVID-19 so far had on DPW employees and operations?

“I am frustrated that Baltimore continues to struggle with regular trash pickup, a problem that predates this pandemic,” Scott wrote.

While Scott has been vocal on the issue of garbage service snafus, Mayor Bernard C. “Jack” Young has been largely silent.

That’s a striking contrast to Young’s focus on trash during his unsuccessful primary campaign to retain his job.

In January, he launched a mayoral “Clean it up!” campaign, touted as “all-hands-on-deck” and “data-driven.” It touted a number of initiatives, including a “Small Haulers Pilot” and a “Pothole Challenge.”

Many, like the “Communities Pitch-in” campaign, put the onus on citizens to do their part.

“This is a bold and aggressive plan to tackle the city’s grime and trash and it will require community participation,” the press release from his office announced, adding: