Right now in Baltimore children are sitting alone in cells, wasting away – despite the well-known fact that solitary confinement causes lasting psychological harm to young people.

One detainee, after weeks alone in his room, is alleged to have attempted suicide. The facility responded by stripping him of his clothes and placing him in a cell without a bed, forcing him to sleep on the floor naked with just a blanket for six days.

Nothing can justify how some children accused of committing crimes are being treated right now. Not the allegations that they have committed serious offenses. And not the pandemic, though that is the rationale detention officials are using.

Children are only let out of their cells once or twice a day for 45-minute recreation periods.

Recently, in a period of just 30 days, 13 youth (out of fewer than 40 detained) and even more staff at the facility tested positive for Covid-19.

Because of this entirely foreseeable outbreak, the children are required to stay alone in their cells nearly around the clock. They are only let out one at a time, once or twice a day, for 45-minute recreation periods.

These short breaks from their cells are the only opportunity they have to shower, wash their clothes and call family members.

As a public defender, I am a witness to these abominable conditions at the Youth Detention Center on Greenmount Avenue.

For months, the children have not received adequate, if any, educational instruction. They are not being provided rehabilitative services. They are not given therapy or allowed to see their families in person.

Solitary confinement means being alone in a cell for all, or nearly all, of the day with minimal environmental stimulation and little opportunity for social interaction. State officials may give such cruel and inhumane treatment another name, but that’s simply what it is.

Dr. Stuart E. Grassian, a longtime member of the Harvard Medical School, has published considerable research detailing the harmful psychiatric effects of solitary confinement on adults in prisons. He has argued that the deprivation of environmental stimulation, especially when of prolonged duration, is toxic to brain functioning.

For juveniles, the consequences of solitary confinement are particularly devastating because their developmental immaturity leaves them more vulnerable to adverse reactions to prolonged isolation.

The Department of Justice has found that more than 50% of all suicides in juvenile facilities occurred while young people were isolated alone in their rooms, and more than 60% of young people who committed suicide in custody had a history of being held in isolation.

Baltimore’s Youth Detention Center opened in 2017 over the strong opposition of youth advocates who had long opposed spending money to build a jail for children.

When the media was invited to see the new $35 million facility, Stephen Moyer, then secretary of the state Department of Public Safety and Correctional Services, assured the public that this youth jail would “help change the lives of our troubled youth” thanks to rehabilitative services and programming. 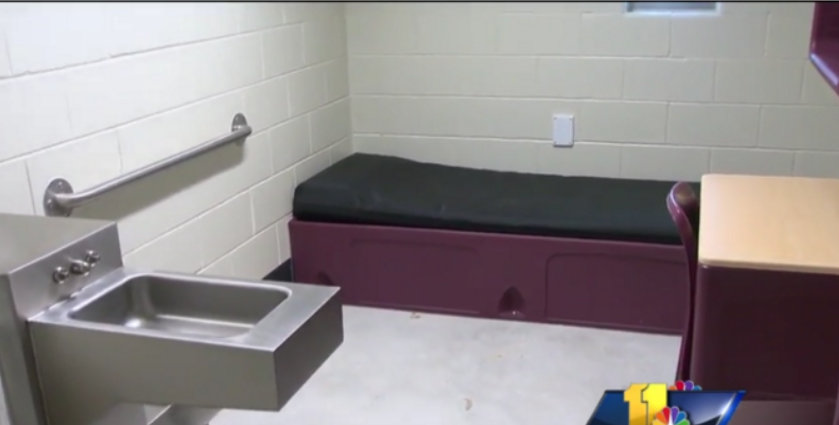 At the 2017 opening of the Youth Detention Center, officials show reporters one of the new cells. (wbaltv.com)

Reporters were asked to notice the bright colors and skylights in the facility. They were shown a gymnasium where youth could exercise, and special rooms where detainees would have access to medical, dental and behavioral health treatment.

Classrooms in the school run out of the new detention center were equipped with computers, allowing the children detained there to earn a quality education, even a high school diploma.

The facility was also advertised as having visiting areas where children could interact with their families and other spaces designated for addiction awareness and conflict resolution.

“He cried out for help”

Now because of the pandemic, none of this is occurring.

No real schooling, no rehabilitative programming, no in-person family visits. Children, most of whom are still legally presumed innocent, are instead being held in the conditions described above or worse.

One boy, while imprisoned in solitary, was mistreated by other detainees. They threw water, and sometimes urine, into his cell as he cried out for help from correctional officers who failed to promptly put an end to his mistreatment.

Children with severe learning disabilities and individualized education plans, instead of being provided an education, are being handed paper packets of worksheets that they often can’t understand.

One boy was allowed to be mistreated by other detainees, who threw water, and sometimes urine, into his cell as he cried out for help.

One child, who asked for help from a guard, was told to shout to his fellow detainees through his room’s air vents for help with his school work.

I have made officials at the Department of Public Safety and Correctional Services and the Attorney General’s Office aware of these conditions.

They justify them as necessary precautions against Covid transmission, and see the placement of a child in a suicide prevention cell without clothes as a standard and appropriate response to protect that child from self harm.

The child being mistreated by his fellow detainees whose pleas went ignored by the guards? They moved him to a different unit, after I made the warden aware of the situation.

But I know that what is happening is not right. This situation is simply unacceptable and someone needs to intervene to stop it.

The current conditions at the Youth Detention Center cannot be justified by the Covid pandemic. Nothing can justify treating human beings this way, especially children.