A simple headline from City Hall – Baltimore’s spending board today approves new travel policy for elected officials – offers little context to the procedural intrigues that arose this morning from the demands of a close ally of Nick and Marilyn Mosby.

Under longstanding rules, the Board of Estimates restricts public comment to contractors and vendors who must file a written notice of their proposed protest by noon on the day preceding the meeting.

But today Kobi Little, president of the Baltimore chapter of the NAACP, participated like a full-fledged member of the board, invited to join the virtual meeting just minutes before it began by City Council President Nick Mosby (who, in turn, said he was directed to do so “I guess” by Comptroller Bill Henry).

Handed an online megaphone, Little instructed the board “to put a full halt” to the new travel policy, denouncing the rules as “officious,” “gratuitous,” “stifling” and “anti-democratic.”

“I would say to you, and the NAACP would say to you, do not subvert the democratic process and the will of the voter by passing a policy that reduces elected officials’ ability to decide how to use their time and which conversation is important to them.”

While never referring to Marilyn Mosby by name, Little alluded to overzealous policies that can “trip up” an elected official in “unfavorable optics” and lead to “something they shouldn’t be held accountable for.”

He warned Mayor Brandon Scott that passage of the rules made it “very, very possible” that future mayors could block other officials from traveling to meetings where they could gather information “that would oppose the mayor’s policies.”

“No elected official will approve of somebody going to Hawaii on a trip. But that trip could be very valuable,” he pointed out. 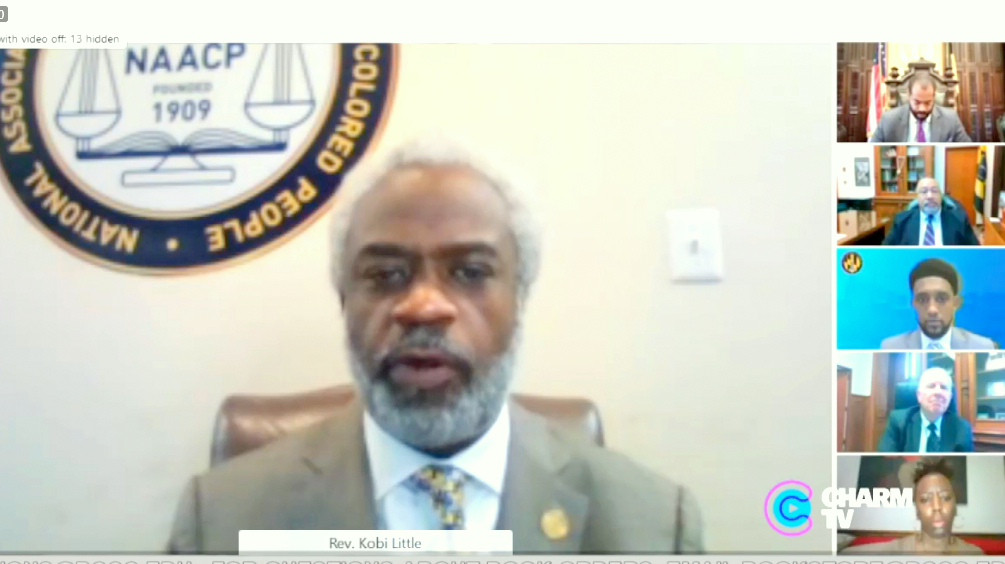 Kobi Little never uttered the words “Marilyn Mosby” today, but he referred to an official being “tripped up” for something “they shouldn’t be held accountable for.” (CharmTV)

The object of Little’s concern involved minor revisions to the travel reporting requirements for elected officials.

The new rules call on electeds to follow the practice of salaried employees and submit a form that lists the destination, dates, purpose and costs of out-of-town travel on government business.

The rules do not set a limit on overall costs other than per-diem government rates for hotels and meals. Nor do they restrict the number of trips an elected official could take. Travel to any destination in the world is still permitted.

And herein lay the issue that no one at the meeting was willing to confront head on – the fierce resolve of State’s Attorney Marilyn Mosby to use her power to defend her pre-Covid travel habits.

Ever since The Brew published an article about her dozens of trips to conferences in Europe, Africa and across the U.S., Mosby has sought to win official exoneration for what she said was unfair and misleading reporting.

The Cumming’s report, released in February, found no misspent travel funds, but criticized Mosby for not disclosing many of her trips to the Board of Estimates and for using her private company to write off federal taxes.

• The Brew’s coverage of the Mosbys

To quell the controversy, Mayor Scott announced that his staff would update the Administrative Manual to clarify the travel policy and bring greater accountability to the process.

The revised rules were published last month. Twice since then, Nick Mosby asked the BOE to delay their approval so his staff and members of the City Council could review them. 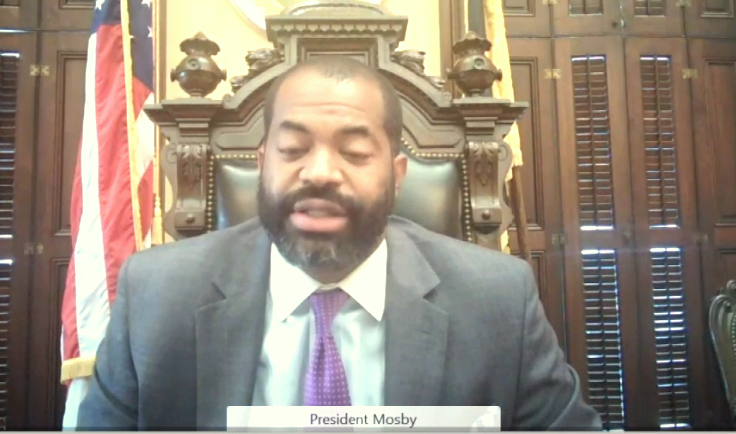 Nick Mosby left it to Rev. Little and Comptroller Bill Henry (below) to attack the new rules. (CharmTV) 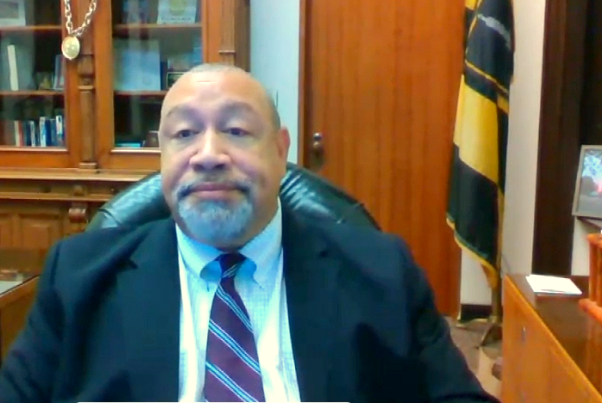 But amid his praise, Mosby kept referring to the 17 elected officials covered by the rules (14 members of the City Council, himself, Comptroller Henry and Mayor Scott).

Missing from the lineup was his wife’s position. Was Nick Mosby suggesting that the state’s attorney was exempt?

Neither the mayor nor lawyer Shea challenged Mosby’s statements. Later, Scott said the new policies would cover 18 positions, including the state’s attorney, and would become effective immediately.

During the meeting, Scott and Shea listened quietly to Rev. Little’s attacks.

Scott began speaking up after Comptroller Henry told Little he fully agreed with his critique of the rules and would be “happy” to “table this matter indefinitely.”

“I move that we approve,” the mayor shot back.

“I would ask for this matter to be deferred,” Henry repeated before adding this caveat – “only if the administration is willing to actually engage in conversations taking up the issues Rev. Little raised.”

Describing his proposal as a “conditional deferral” of the new rules, Henry continued, “If there’s no appetite for that, then I don’t want to waste everybody’s time.”

“Then we should just move the motion,” Scott responded.

After more back and forth, a vote was finally taken.

“I’m going to abstain from this particular vote,” Mosby cheerfully announced to the board. 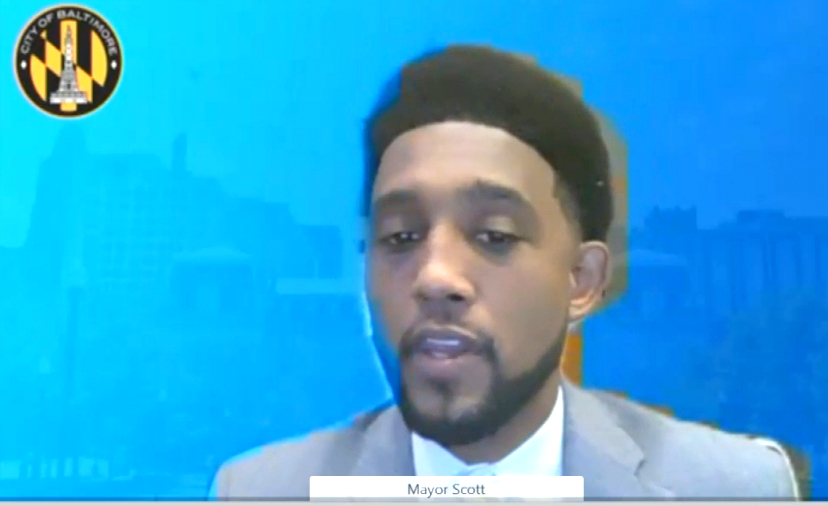 Scott beat back a deferral of the travel rules proposed by Comptroller Henry, while his three votes assured its approval. (CharmTV)

In the wake of today’s vote, Marilyn Mosby claimed credit for the travel changes.

They developed as a result of “the inspector general’s inaccurate assertion that I violated city rules regarding travel,” she said in a statement from her office.

While repeating that she was not required to obtain approval for travel that was not paid for by the city, she said her travels were disclosed on her state ethics forms.

“The genesis of today’s vote was the Inspector General’s inaccurate assertion that I violated city rules regarding travel that was formally disclosed on all my ethics filings.

“Consistent with my concerns on the OIG’s faulty report, the  city solicitor released an opinion stating that ‘there is nothing in the City Charter or the City Code that would require BOE approval of non-funded travel by an elected official.’

“As I have always disclosed all my work related travel, I am in support of the board’s decision to require city elected officials to formally do the same. Unfortunately, against her public promise, the OIG has yet to correct her report regarding this issue.”