Carolyn Shoemaker looked out at the rally in front of the home on Sarah Ann Street she is about to leave and saw a crowd of people from across the city who had come to support her neighborhood, Poppleton, where residents are fighting displacement.

“This really makes no sense,” said one of those who turned out, Rachel Templer, of Union Square, pointing to the inaction of New York-based La Cité since the company was given rights to develop the land 16 years ago.

“It’s not clear to me that anything is happening much with this development over all this time,” Templer said. “So in a city with so much vacant land, why is this  being done to this neighborhood since, I mean, people live here.”

In spite of the crowd of about 100 people assembled at the 1100 block of Sarah Ann Street, Shoemaker said she felt only a glimmer of hope.

She was sitting near the block of historic alley houses inhabited by Black residents since just after the Civil War.

Last year, the city purchased the properties and is now telling residents they must leave – a place where Shoemaker and her neighbors have rented homes and lived peacefully for decades.

“Maybe – maybe – it means someone else won’t have to go through the pain we are. It’s too late for us,” said Shoemaker, who accepted the city’s offer of relocation assistance before the opposition got organized and soon will be moving into an apartment near Mondawmin Mall.

“It’s like you lost a mom or your sister,” says Carolyn Shoemaker about leaving her blue-shuttered historic house on Sarah Ann Street.

She and another neighbor, who already left, were led to believe they had no choice, but would have loved to remain on the block, which they reclaimed from drug dealers 20 years ago and enhanced with a tidy park and play area.

“Leaving your home, it’s like a death,” Shoemaker said, her eyes welling up. “It’s like you lost a mom or your sister.” 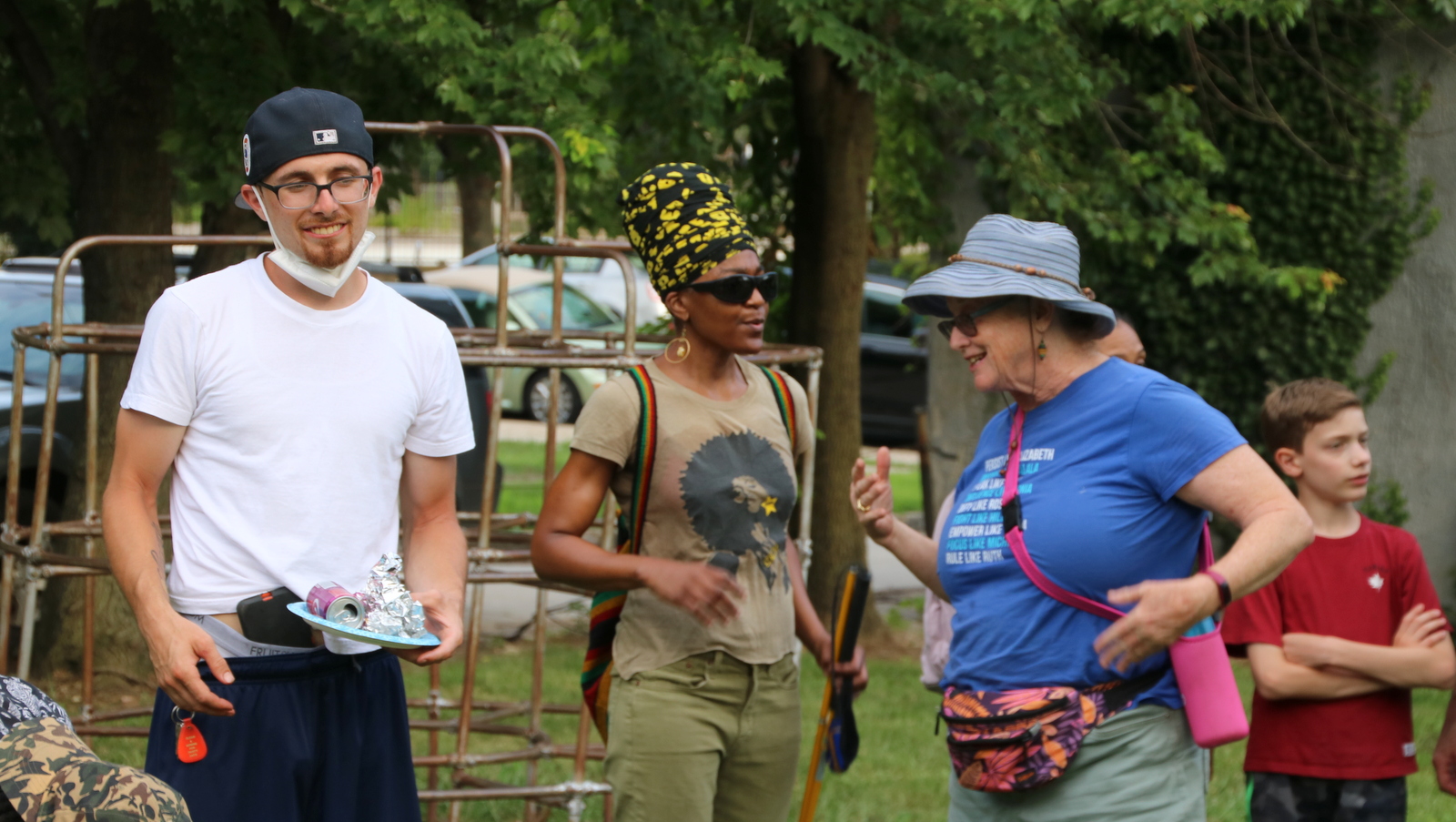 The Save Our Block rally and celebration was an upbeat event, featuring food, toys and a bouncy house for kids, and live and recorded music (including at one point, Gloria Gaynor’s “I Will Survive”).

Organizers were distributing literature about the historic street of small, pastel-painted rowhouses, encouraging people to sign an online petition calling on the Department of Housing and Community Development (HCD) to preserve what’s left for current residents.

A number of prominent community activists spoke, including Nneka N’namdi of Fight Blight Baltimore, Bree Jones of Parity Homes and Lenora Knowles, of Village of Love and Resistance.

But none of the invited elected officials from City Hall (including Mayor Brandon Scott, City Council President Nick Mosby and Councilman John Bullock) showed up.

Who did make appearances were Ivan Bates and Thiru Vignarajah, who challenged and lost to Mosby’s wife, Marilyn Mosby, in the 2018 primary for state’s attorney, and China Terrell, a declared candidate for next year’s primary for state delegate in the 40th District that includes Poppleton.

Giving organizers some hope, however, 40th District Senator Antonio Hayes sent an email promising to attend “and lend my voice in support of the residents,” and he did show up later in the evening.

(Hayes declined to respond to a request from The Brew today for further comment.)

UMBC Professor of American Studies Nicole King, who has been emailing officials in recent months in hopes of helping residents, said she did receive a response from the staff of Comptroller Bill Henry and that a meeting with him has been scheduled for this week.

But otherwise, King said, “We’re just getting nothing” from HCD or City Hall. 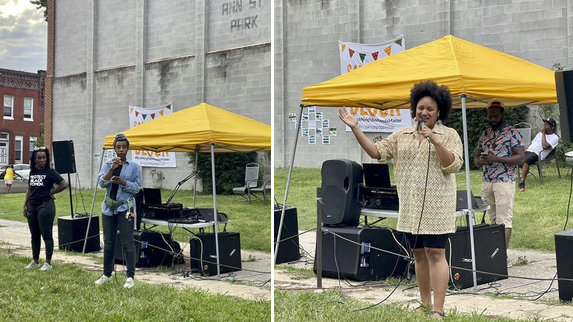 Nneka N’namdi of Fight Blight Baltimore, Bree Jones of Parity Homes and Lenora Knowles of Village of Love and Resistance speak out at a rally in support of Poppleton residents. (@organizepopple1)

The block being targeted by the city, including the home of Sonia and Curtis Eaddy, is part of a 14-acre area over which La Cité got development rights in 2005 and $58.6 million tax increment (TIF) public financing in 2015. (Except for two partially-occupied apartment buildings, the project remains stalled.)

The Eaddy’s, meanwhile, are in a court battle with the city, contesting what they say is its misuse of its eminent domain powers to take possession of her house, as it has already done to more than 100 other houses and businesses in the neighborhood.

When asking the city for help to put a small  playground in a vacant lot, a Poppleton resident was told, “Oh, no, that land is for the developer.”

Standing in front of her home on Carrollton Avenue last night, Sonia Eaddy gestured to the nearby metal swing set where children were playing that her neighbors had salvaged from a church that was upgrading its play area.

Eaddy said when she had asked if Baltimore Recreation and Parks could put a small playground on that vacant lot, she was told, “Oh, no, that land is for the developer.’” 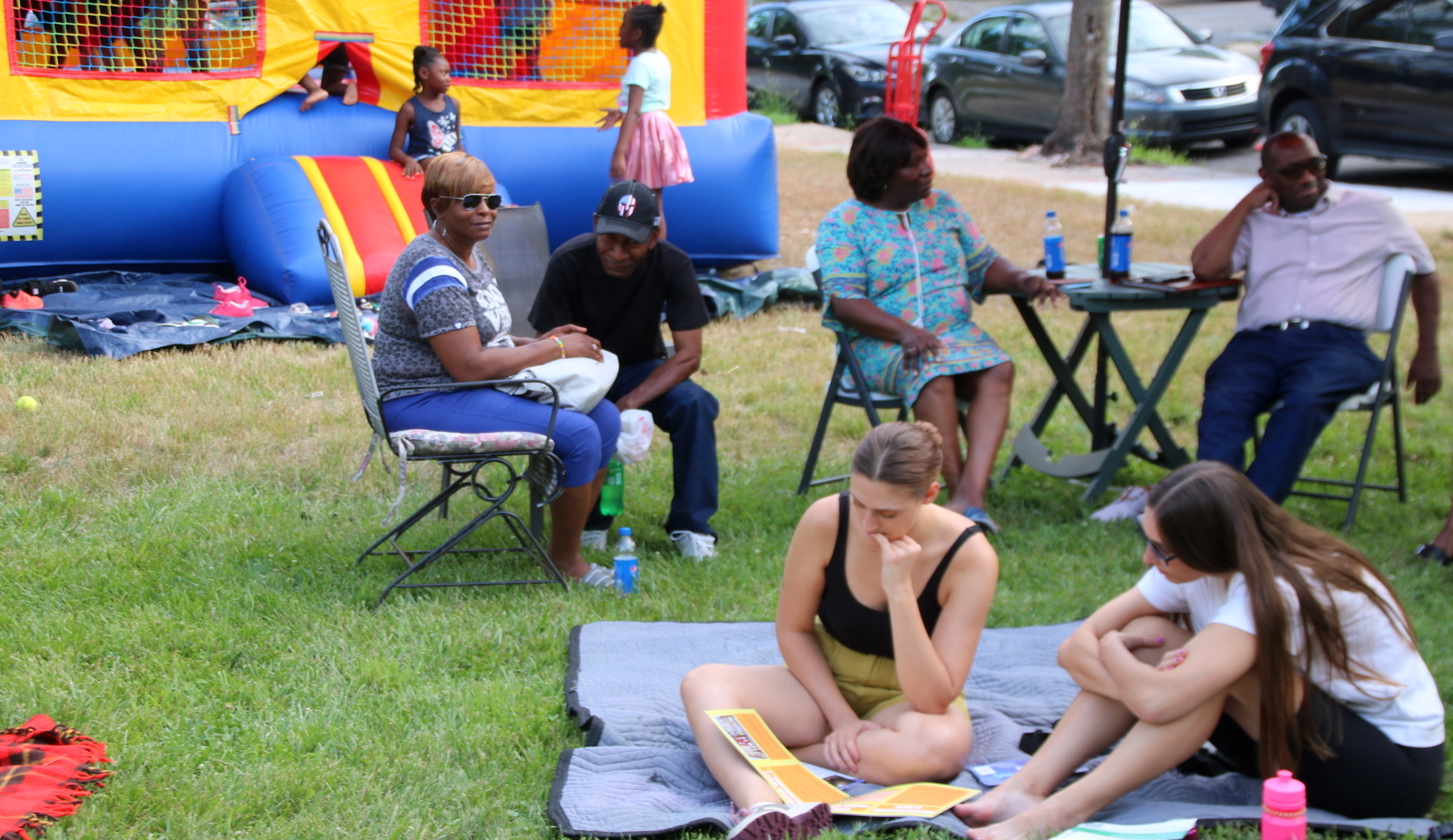 Children play and adults relax on the grass in Sarah Ann Street Park, which residents established and maintain on a vacant lot. (Fern Shen)

A Solution: Sell it to Us

Participants at the rally said the city’s treatment of Poppleton residents, displacing them under the pretext of a vague development plan, points to fundamental flaws in the city’s approach to urban renewal.

“I think the way that development happens in this city is wrong. It’s done without any thought for the people who have lived here,” said Kate Drabinski of Charles Village.

Among the participants in the rally was a contingent of supporters from a church in Anne Arundel County, Oh Taste and See Apostolic Faith Church and Ministries.

Elder Sherry Hudson said the city should support working-class people who have been keeping neighborhoods like Poppleton alive.

“What’s happening here is they’re trying to draw in people who can afford [high-priced housing] and not thinking of the little folks,” Hudson said.

The city should support people of modest income, she said, but cautioning: “Don’t just build Section 8 housing. Help the people in the middle who are left out.” 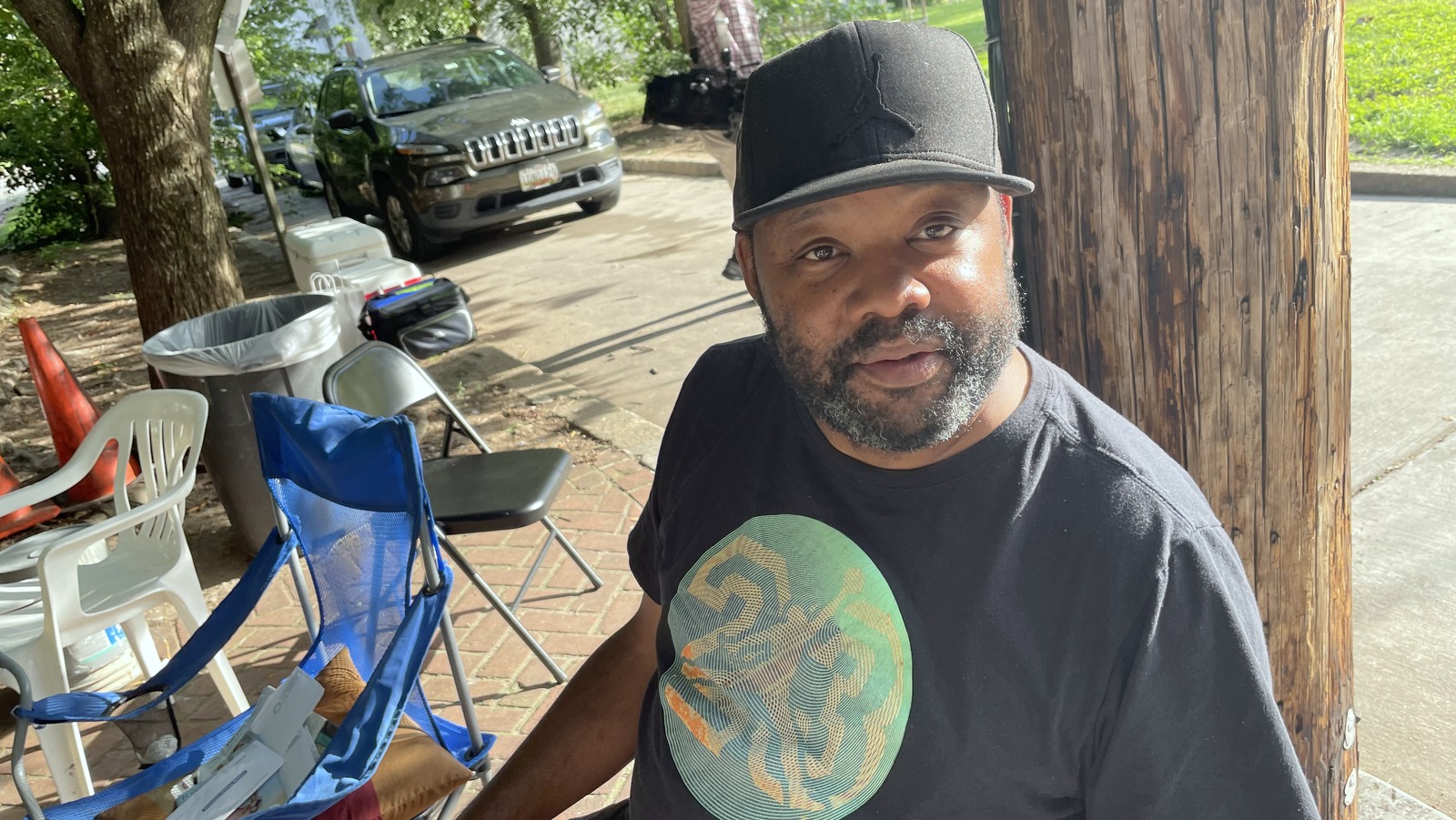 “This has been a good block. Keeping people here is a win-win,” says Bobby Lee Shackleford Jr. (Fern Shen)

A solution suggested by Sarah Ann Street resident, Bobby Lee Shackleford Jr., was for the city to assist the people like his family with low-interest loans so they could purchase the homes where they have lived for years.

“Renovate them. Sell them to us. Keep people living here and maintaining them like they have been, and now they’d be paying taxes,” said Shackleford, 52, who works for the U.S. Coast Guard.

“My dad has been here for like 50 years – this has been a good block,” Shackleford said. “Keeping people here is a win-win for everybody.”