The latest study of Baltimore’s problem-plagued water and sewer system reaches, among other things, this conclusion:

There are too many consultants on the job.

If that’s less-than-surprising to jaded government watchers, consider findings in the report documenting just how much of this work is supervised, overseen and inspected by outside advisors (almost all of it) and how well government scrutinizes the costs (hardly at all):

• Of the roughly $1.5 billion worth of new construction undertaken in recent years to modernize water infrastructure and end sewage overflows, 100% of the design work and 100% of estimating is done by outside companies and consultants.

• Likewise, 90-100% of environmental services and 50% of construction inspections are done by outside companies and consultants, the study found.

• Baltimore City, meanwhile, delegates hiring authority to its DPW director, who can then ratify his decision as a member of the Board of Estimates.

That’s hardly the end of it.

The error-prone UMAX billing system is monitored by a bevy of consultants flown in from Atlanta (they get their hotel, food and travel costs paid for by Baltimore ratepayers).

Total costs for these consultants since 2014: more than $26 million, according to Baltimore’s inspector general.

It’s a similar story with the city’s wireless “smart” water meters – which cost $82.5 million to install six years ago but are often blocked by obstructions or disabled by moisture. The communications gear was supplied by Itron, a global brand based in Spokane, Washington, while the meters came from third-party vendors selected by DPW.

Their report comes on the heels of a $420,000 “financial and performance analysis” prepared by Baker Tilly in 2018 and a $90,000 report on commercial water users prepared by Raftelis Financial Consultants in 2020.

In the wake of such piles of paper documenting a very high-cost, dysfunctional system (see chart below), what are the chief executives of Baltimore City and Baltimore County planning to do?

“Mayor [Brandon] Scott and County Executive [Johnny] Olszewski have directed the creation of a working group,” says a press release issued by Scott’s office on Monday.

The working group will consist of city and county officials led by Scott’s newly installed DPW director, Jason Mitchell, and Olszewski’s acting DPW director, D’Andrea Walker – who cannot be made the permanent department head because she is not a licensed engineer, as required under the county charter.

It is this “diverse stakeholder” group, according to Olszewski’s press release, that will “explore” ways to “help standardize high-quality water services, improve the overall customer experience and lower shared costs through economies of scale.”

And who will guide the group?

You guessed it: consultants. 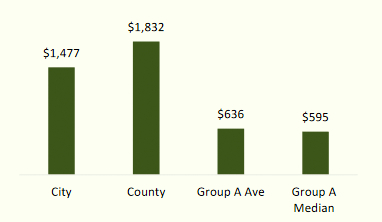 Under agreements dating back to the 1920s, Baltimore City owns the reservoirs and supplies the drinking water to Baltimore County and to parts of other counties, currently reaching 1.8 million residential and business customers.

The counties pay bulk water fees to the city. Baltimore County operates its own sewer network, which empties into the city’s system for chemical treatment at Back River and Curtis Bay and disposal into the Chesapeake Bay.

The NewGen report comes a month after the 22nd increase in utility rates for city customers since 2000. For several years going, Baltimore’s rates have exceeded the global affordability standards set by the United Nations.

The report also comes three weeks after Mayor Scott and the BOE settled a lawsuit with the ex-deputy chief of staff at DPW, who charged “fraud, gross waste and misuse of public funds” in the water meter installation program.

Shaaron Phillips said she was dismissed after she became a “whistleblower” and presented documentation to her superior, Johnnie Hemphill, about how DPW overpaid consultants and rebid construction work  – practices that “cost ratepayers double and triple to do the same work,” she alleged.

Last September, Phillips and Hemphill were released by DPW’s acting director, Matthew Garbark, reportedly as part of an organizational reshuffle. The city settled Phillips’ lawsuit in record time (for $158,000) before it could go to court and the allegations heard by a jury.

The NewGen report gets into none of this nitty-gritty, but it does point out the sizable turnover in the city and county, which it says has led to “a sense of operational paralysis.”

Since 2015, Baltimore DPW has lost 31 key administrators, engineers and project managers, while the county has seen the departures of 17 senior staff, including two directors. 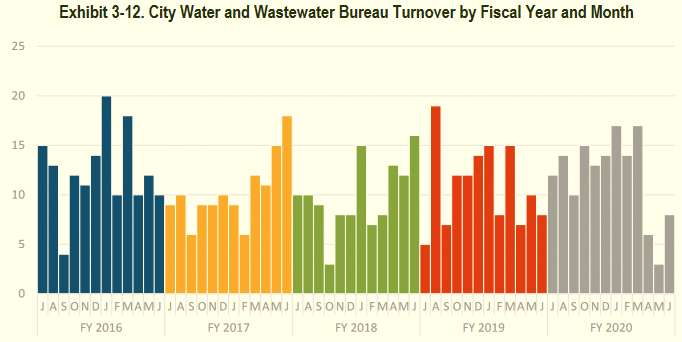 Monthly turnover of senior staff in the water and sewer departments of the city and county. (NewGen)

The report also describes other problems that have been known for years but never seem to get fixed despite the billion-dollar-plus of capital expenditures.

For purposes of health and safety, the most serious problem facing Baltimore City is overflowing raw sewage.

Much of it stems from a 100-year-old “structured,” or engineered, pipe configurations that dump sewage into the Jones Falls during periods of heavy flow, which then empties into Inner Harbor. Lesser outflows take place along sewer mains that run along Herring Run and Gwynns Falls.

In 2002, the O’Malley administration signed a consent decree with the U.S. Environmental Protection Agency and the Maryland Department of the Environment promising to end all overflows, known as SSO’s, by 2010.

The deadline was never met. A new agreement, signed in 2016, calls for overflows to stop by 2022 through various improvements to the Back River plant and miles of newly-laid pipe.

The NewGen report found that the city still has a long way to go.

While Baltimore County reports substantially fewer spills in recent years (some of them recorded only after the fact), it should be noted that the county’s wastewater flows through the city, exacerbating the city’s overflow problems. 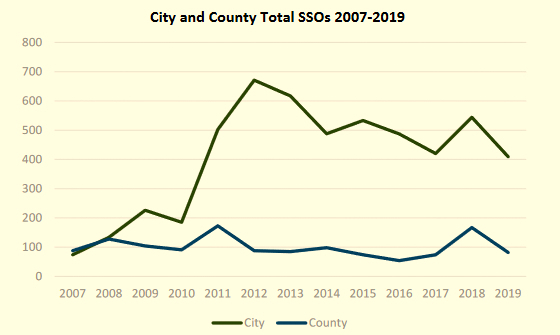 With over 400 incidents in FY19 alone, Sanitary Sewer Overflows (SSOs) remain a major problem in the city (upper line). Baltimore is under a federal consent decree to end all overflows by 2022. (NewGen)

The report also sheds light on a matter that has been debated for years: Is the city subsidizing county water users? Or is the county underwriting the city’s utility costs?

Like much else, it is not an easy question to answer.

The NewGen authors were unsure about how the city and county calculate water usage. Each jurisdiction uses different types of water meters, and each boasts its own cost-allocation model and annual reconciliation process.

Delving deeper into the issue, “the project team reviewed numerous letters, memoranda and emails that chronicle both jurisdictions’ attempts to reconcile and explain the wide swings in revenue and cost allocation settlements that occurred between 2014 and 2018, but it is evident that neither the city nor the county ever reached agreement on the final settlements.”

NewGen determined that Baltimore City believes Baltimore County owes a total of $15.4 million as of June 2020. Data generated by the county indicates it owes the city $14.6 million.

Despite the relatively small difference of $749,562.42, the two sides remain at loggerheads.

It’s an impasse that bodes ill for city-county cooperation, as promised by Scott and Olszewski, on matters far more costly and contentious.