It’s a scheme that usually takes place in the shadows – a contractor cutting corners and dodging prevailing wage laws who forces workers to kick back cash.

But yesterday in open court in Baltimore, Sergio Blanco, of Laurel-based BAC Contractors Inc., pleaded guilty to charges of stealing wages. An employee had come forward to work with prosecutors.

Blanco, whose company was hired in 2019 to work as a drywall subcontractor on the new Morgan State University Student Services Building, told the employee to pay or lose his job.

“I had to return Sergio $200 fee every week for having me work on a government project – money that I badly needed to cover my expenses and to support my family,” the victim said in an impact statement read before Maryland District Court Judge Katie Murphy O’Hara.

“It was not enough for Sergio to fire me, but he also proceeded to let many other contractors know so that they would not offer me a job,” the statement continued. “Due to this situation, I spent a lot of time unemployed, without the right to unemployment benefits.”

Before being led off in handcuffs, Blanco was asked if he wanted to speak and declined. But in a “testimonial video” provided later by the state attorney general’s office, the 49-year-old contractor warned, “Please don’t make the same mistake I did.”

“I thought I could be more competitive and make more money if I made my workers pay me a rebate of their wages,” Blanco said. “The attorney general’s office charged me criminally, and I will be spending time in jail.”

Under the terms of the agreement, Blanco pleaded guilty to one count of a misdemeanor “theft scheme.” He was sentenced to six months in jail with all but 50 days suspended, followed by three years of supervised probation upon release.

As part of the agreement, Blanco prepaid $50,000 in restitution that will be made available to certain workers his company underpaid in violation of Maryland’s prevailing wage laws, according to a statement released by the AG’s office.

“Misclassification,” which occurs when an employer incorrectly classifies workers as independent contractors, is an industrywide problem, according to the Maryland Department of Labor.

In most cases, the misreporting is intended to avoid paying unemployment insurance taxes and other payroll taxes as well as workers’ compensation ionsurance premiums.

The department’s 2020 report notes that, going back to 2015, 92 cases of  misclassification were reported, resulting in six joint investigations concluded and 198 misclassified workers discovered.

In contrast to prior years, no misclassification citations were issued by the agency in 2020 because “the Covid-19 pandemic. . . prevented the completion of any joint investigation of the cases.”

Morgan State University’s Tyler Hall was where the wage theft by BAC took place in 2019. (commercial-group.com)

Workers typically keep quiet about the practice for fear of losing their jobs and being blackballed by the industry. The case of BAC that Assistant Attorney General Alexander Huggins presented in court yesterday was an exception.

As a drywall subcontractor on the construction of the Calvin and Tina Tyler Hall Building on the Morgan campus, Blanco’s company submitted documentation indicating that it had paid workers prevailing wages as specified by state law and the procurement contract for the project, Huggins said.

Dell Jackson, a spokesman for Morgan State University, said the school “has no direct affiliation with the subject identified nor any direct knowledge of any compensation practices.” 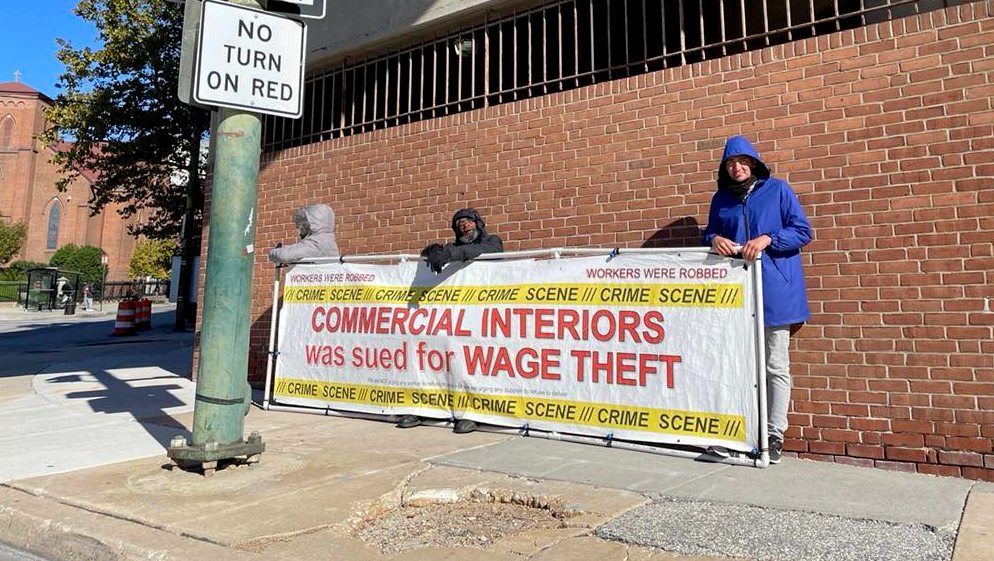 Earlier this week, three people hold up sign, “Commercial Interiors was sued for wage theft,” outside of the University of Maryland’s Midtown Medical Center on Eutaw Street. (Fern Shen)

Commercial Interiors was a subcontractor on the Tyler Hall project, listing the 139,000-square-foot building on its online portfolio.

Part of the Commercial Group headed by Kevin Johnson, the Hanover-based company has been spotlighted before by labor unions for alleged wage theft.

In 2019, a Towson University project where Commercial Interiors was working was the subject of a public protest by representatives of the Philadelphia-based Eastern Atlantic States Regional Council of Carpenters organization that has members in Maryland.

Union representatives held up a banner and handed out fliers that provided more detail:

“Commercial Interiors Inc., subcontracted drywall work to a series of labor brokers who often shortchanged workers. Commercial Interiors along with their business partners are bad for our communities and workers in the construction industry. Does Towson University care???”

Earlier this week, protesters lambasted the company in front of the University of Maryland’s Midtown Baltimore medical campus.

The company did not respond to questions about its labor practices from The Brew.

Attorney General Brian Frosh yesterday stressed that workers who were victimized by BAC are eligible to receive restitution funds.

“We urge any employees of Blanco or BAC Contractors who were required to pay a rebate out of their wages while working on the new student services building at Morgan State University to contact the Office of the Attorney General at 410-230-1712 as soon as possible,” Frosh said in a statement accompanying the plea agreement.

A claim must be made to Frosh’s office no later than February 5, 2022.