In the wake of last summer’s news coverage highlighting massive illegal releases of partly treated sewage and serious operational failures at Baltimore’s two treatment plants, the city was already facing lawsuits filed by the state and by Blue Water Baltimore.

The environmental watchdog group has been working for the past two months with the city and the Maryland Department of the Environment (MDE) to craft a consent decree to bring the polluting plants into compliance.

But on a visit to the Back River Wastewater Treatment Plant in Dundalk Tuesday – triggered by citizen reports of a fish kill and floating solids in the river – inspectors found that the problems have worsened:

Settling tanks, filters and other components at the facility were clogged with scum and solids and rendered inoperable.

Some equipment was choked with reeds, grasses, vines and algae; some areas reeked of “sewer gas” (corrosive hydrogen sulfide).

In one instance, the inspectors observed “a floating layer of emulsified fats, oils and grease.”

And only two of the 11 primary settling tanks were in service, with one of them requiring maintenance to function properly. 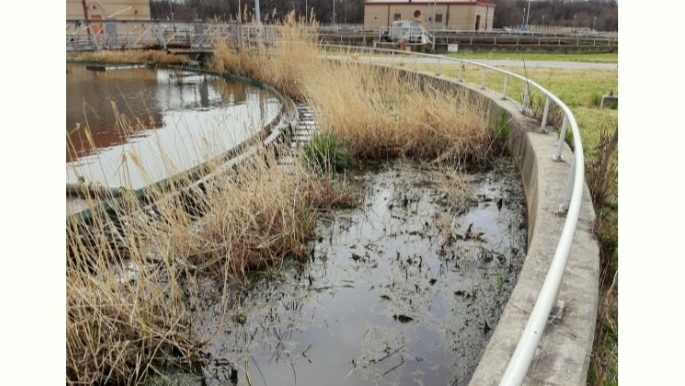 A secondary clarifier filled with algae, reed grasses and other vegetation at the treatment plant. (Maryland Department of the Environment)

Warning that the situation risks a “catastrophic failure” that could harm public health and the environment, Maryland Secretary of the Environment Ben Grumbles issued an order requiring the plant to be brought back into compliance within 48 hours.

Environmental groups said they were stunned to learn of the abysmal conditions MDE had found.

“The photos and stories emerging this week about the Back River plant are shocking,” said Chesapeake Bay Foundation’s senior scientist, Doug Myers.

“It looks like many parts of this plant receive no routine maintenance and most of the treatment systems are compromised as a result,” Myers said.

“We’d been hearing from DPW that things were improving over there,” said Alice Vopitta, Blue Water Baltimore’s Baltimore Harbor Waterkeeper. “We’re very discouraged to see now they are actually getting worse.”

How could the city allow conditions to deteriorate, after so much regulatory criticism and embarrassing news coverage?

“You would have to ask them that,” Volpitta said.

Asked to respond to Grumble’s order, a spokeswoman for DPW provided a short statement:

“The city is disappointed to learn of MDE’s order given the collaborative efforts to improve performance over the past several months. However, once the order is served, the city will respond accordingly.”

Neither Mitchell nor Scott provided comments on the state’s declaration of urgent failures at the facility.

“Our team has developed a strategy to get back into compliance and will be providing a timeline for compliance to MDE next month,” he said at the time.

“The root causes for the violations have been identified by DPW and will be addressed systematically to ensure we achieve 100% compliance,” Mitchell declared.

Praise and Blame for MDE

MDE’s action comes after the state agency itself has come under criticism for lax enforcement of environmental regulations.

At a January hearing in Annapolis, Grumbles was questioned harshly about a number of incidents, involving polluting chicken farms and contaminated oysters, along with other issues.

Volpitta had nothing but praise for MDE following Grumbles’ order.

“This is a very positive step in the right direction,” she said. “This is MDE saying we are not going to accept this.”

Others pointed out that the order came one day after the state lawmaker representing the area called for Grumbles’ resignation, saying MDE had failed to respond to longstanding complaints about “escalating problems” at the Back River plant.

In a letter to Gov. Hogan, Delegate Robin L. Grammer Jr. called Grumbles “incompetent” and said that MDE “has consistently demonstrated a complete lack of accountability and oversight.”

“As of this week, it appears that solid human feces are being leaked from the plant,” the 6th district Republican said in a letter posted on his social media along with a photo. 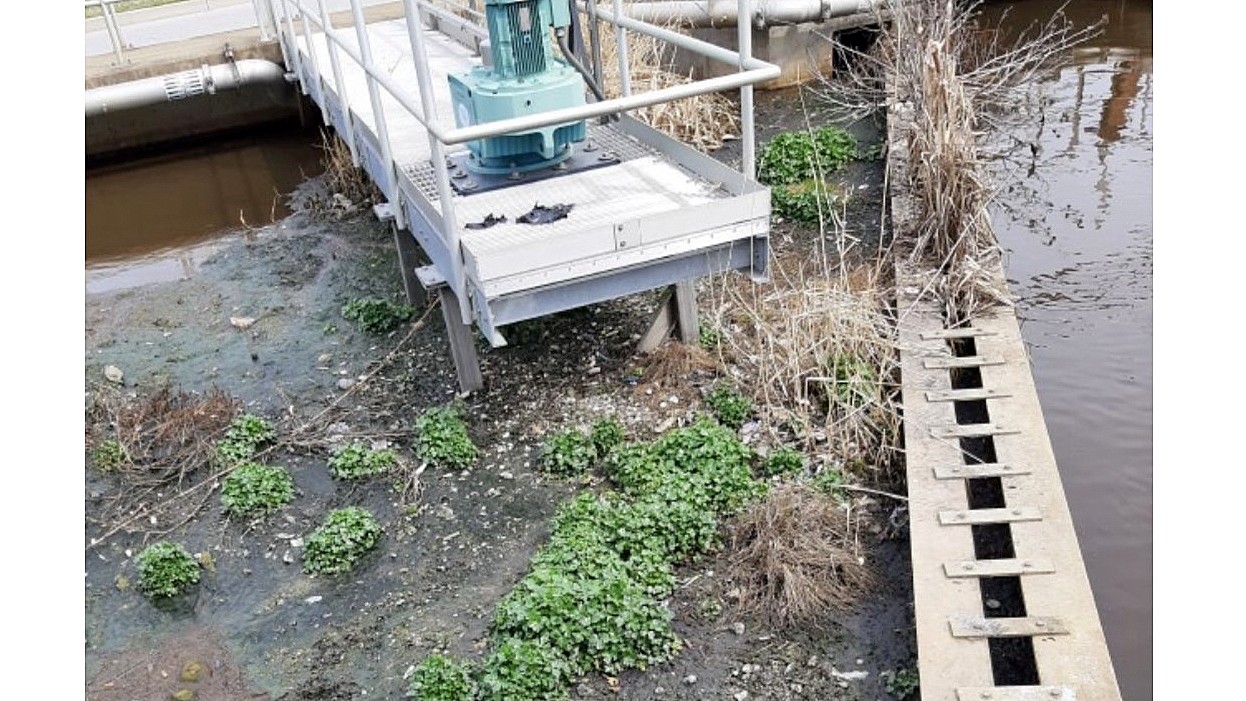 Solids buildup with vegetation growing in the biological reactor found during the March 22 inspection of the Back River Plant. (MDE)

That allegation is a reference to fisherman Raymond Vrablic III’s discovery last week of dead fish floating in the Back River waterway near the plant.

When Desiree Greaver, project manager for the Back River Restoration Committee (BRRC), heard what Vrablic had seen on March 18 – black globs that looked like solid feces floating in the water along with fish carcasses – she alerted her contacts at Blue Water Baltimore and MDE.

“It looked like a volcano of black stuff coming up from the bottom”  – Desiree Greaver, Back River Restoration Committee.

On Tuesday, Greaver, who has been sampling the water near the plant regularly for Blue Water Baltimore, went to see for herself.

“It looked like a volcano of black stuff coming up from the bottom in several places,” Greaver said. “It looked and smelled like feces.”

MDE officials who told her they had been onsite over the weekend said the material was not feces, but algae mats that had risen to the surface.

Blue Water’s Volpitta said MDE provided her with their explanation for what happened.

“They said it was something to do with the moon phase, a drop in temperatures and a low tide causing an inversion,” she said. “Even if that’s the case, why was all that algae there? We can all agree, it is the wastewater treatment plant that is causing it.”

Greaver said she is “thrilled” Back River’s problems are getting some attention. But she isn’t so sure she buys the algae explanation.