Roland Park got its wish, as did developers in Woodberry, Highlandtown and Port Covington.

Now the rush is on to enact the new code before the Council term expires.

This means that the full body must approve the code at its Monday October 24 meeting, so the measure can pass third reader next month and be signed into law by Mayor Stephanie Rawlings-Blake before her term ends in early December.

The upshot has been a blizzard of amendments to the text and maps of the code that several Council members privately admit they have never read, but are more than willing to approve on the basis of “councilmanic courtesy,” or the right of a member to determine the fate of his or her district.

“It doesn’t make sense, but here you have it,” said a person closely involved in the process.

Thus, all 300-plus changes brought by Council members to the markup session of the Land Use and Transportation Committee were ratified without a single dissent.

For two hours, chairman Edward Reisinger repeated the words, “Seven affirmative, moved,” as the amendments were passed by the seven-member panel. 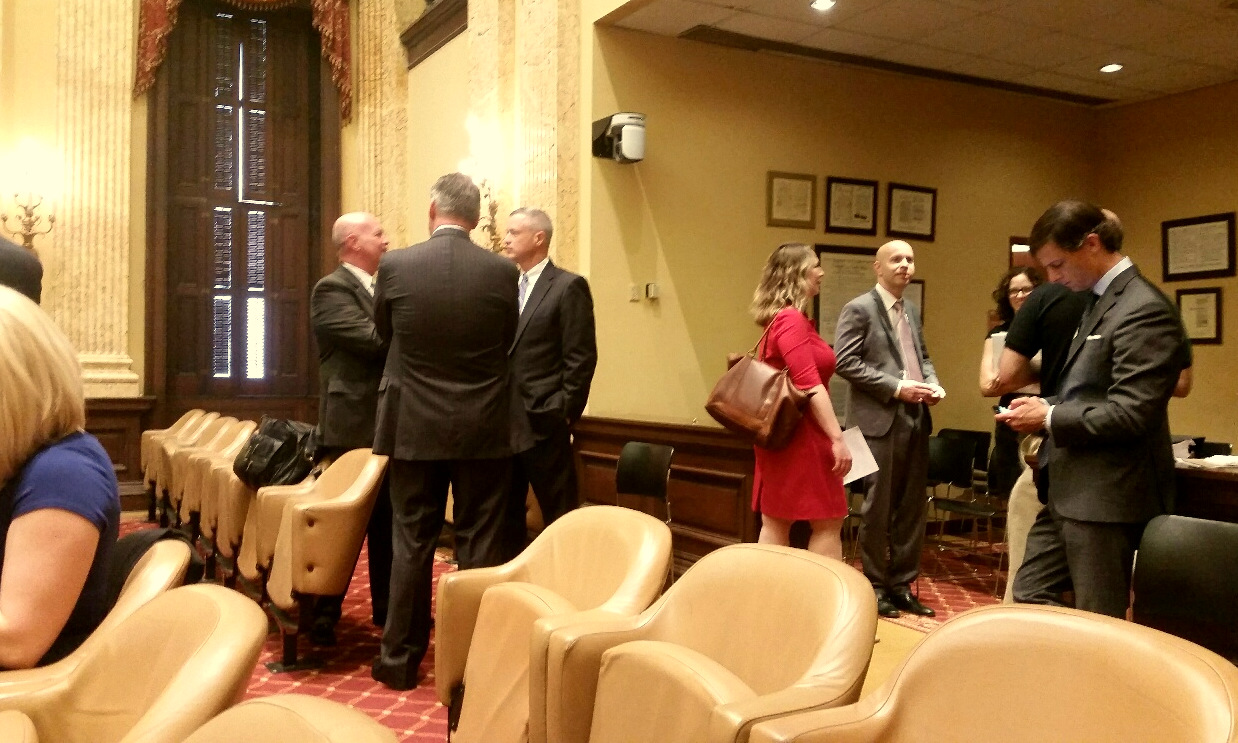 Before Wednesday’s markup, lawyers and lobbyists congregate in the Council chambers. Among them: Sean Malone (back to camera), Peter O’Malley, Caroline Hecker, Ryan Potter and Adam Baker. (Mark Reutter)

Of the score of people in the audience, mostly lawyers representing developers, some tried to follow the action from downloaded lists of properties, while others quietly chatted and a few stared at the city attorneys and legislative assistants scurrying about the chambers.

Many of yesterday’s changes were technical in nature and involved correcting mistakes that had cropped up during the five years spent by the Land Use Committee in reviewing the new code, which was the result of two years of prior effort by the city Planning Department.

Policies for the next 40 Years

The new code will supplant the existing code, which dates to the early 1970s, and is expected to govern Baltimore’s land use policies for the next 40 years.

In addition to a height “overlay” in Fells Point that First District Councilman James B. Kraft backed away from (story here), the panel acted on four other high-profile matters:

• “Downzoned” or reduced the density of the open space on Falls Road owned by the Baltimore Country Club. In any future development of the land, lot sizes must be a minimum of 14,250 square feet as opposed to 9,000 square feet.

The larger lot size was advocated by the Roland Park Civic League and went against the recommendation of the Planning Department. The panel yesterday voted 7-0 in favor of the change, deferring to the wishes of 6th District Councilwoman Sharon Green Middleton.

The zoning dispute, however, may not be over. With high-powered lawyer-lobbyists Lisa Harris Jones and Sean Malone at its side, the club has let it be known that it is considering a lawsuit against the city. The premise is that the zoning process has unfairly devalued the worth of its land. 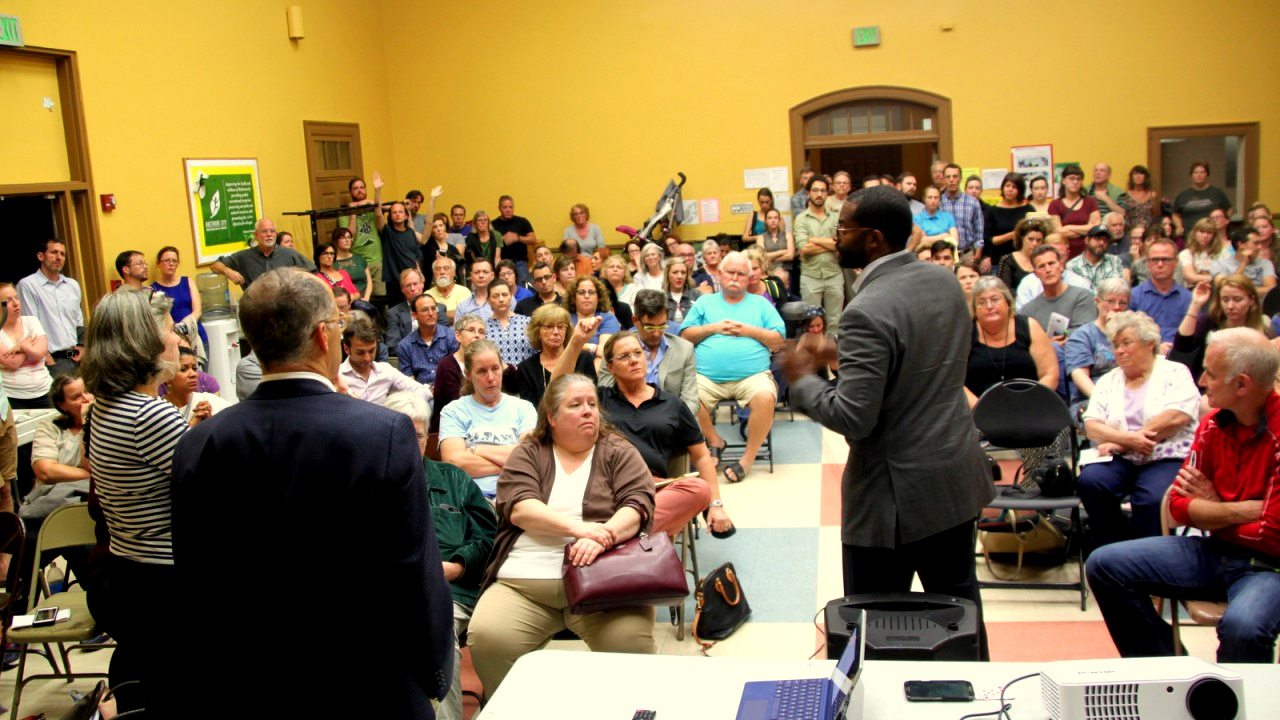 On Tuesday night, residents cram into a meeting room to hear Councilman Nick Mosby talk about zoning plans for a proposed conversion of the Pepsi plant in Woodberry. (Fern Shen)

• Two miles south of the leafy country club, a Pepsi distribution plant in Jones Falls Valley will be rezoned from industrial to industrial mixed use (I-MU). This will enable developer Himmelrich Associates to convert the warehouse and loading terminal to apartments, offices and retail outlets.

Seventh District Councilman Nick Mosby decided on the I-MU designation at yesterday’s markup after city attorneys told him that he could not delay the property’s zoning any longer.

Before Mosby’s amendment, the site was proposed as TOD (Transit-Oriented Development), which allows up to 100-foot-high construction.

That height has been lowered to 60 feet, but the zoning permits Himmelrich wide berth for commercial and residential uses, such as a high-end grocery store, restaurants and open space described at a well-attended community meeting. 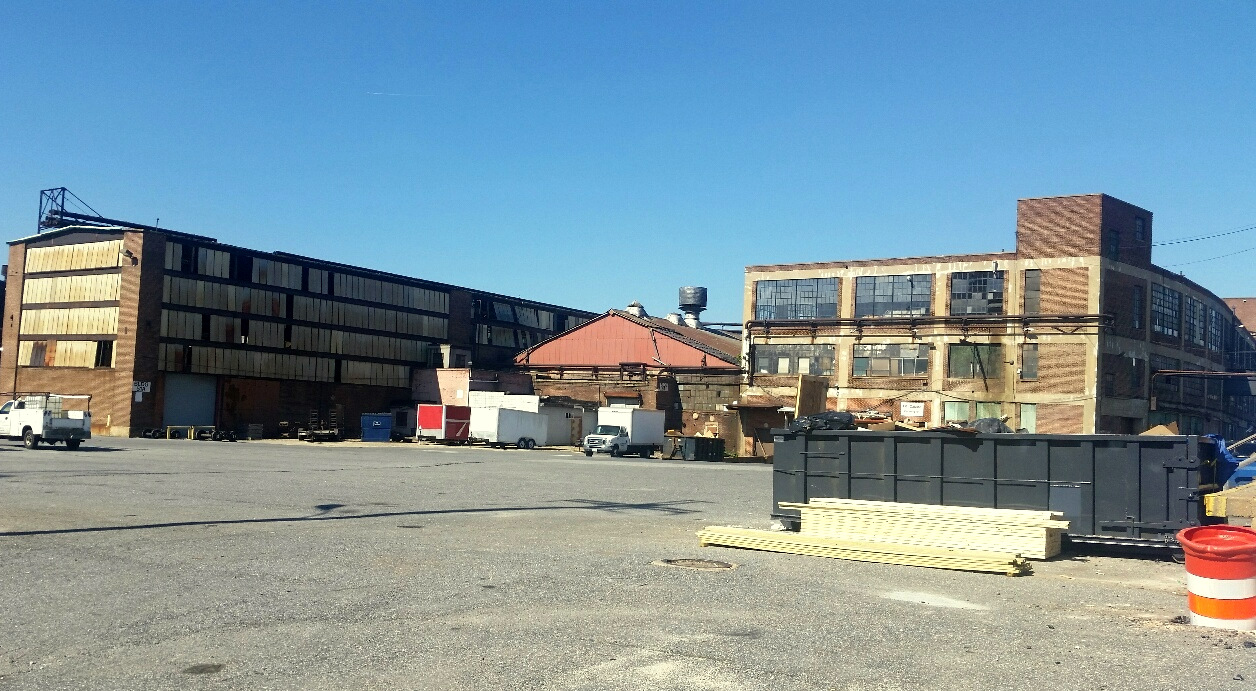 • In the railroad corridor separating Highlandtown and Greektown, the committee paved the way for redevelopment at the former Cambridge Iron & Metal site and the one-time Crown Cork & Seal factory on Eastern Avenue. Other properties were rezoned on South Haven and O’Donnell streets.

The new designations will free up more than 40 acres of industrially-zoned land to residential and commercial development.

The change was vocally opposed by the Maryland Port Administration, whose director of planning, James M. Dwyer, admonished the Council for not “protecting” the land for industrial users. He said the properties, which border the CSX and Norfolk Southern rail lines running to the Dundalk and Seagirt Marine Terminals, are not suitable for residential properties.

Dwyer predicted a doubling of freight traffic on the CSX line due to increased Panamax trade and the expansion of industrial users at Sparrows Point. Out of considerations for safety and quality of life, Dwyer and others said that the two properties should remain industrial.

In the case of the Cambridge property, the Planning Department sided with the MPA’s position. But at the behest of Cambridge Iron’s Sanford M. (Sandy) Shapiro, Councilman Kraft amended the property’s zoning to I-MU similar to the Pepsi conversion in Woodberry.

In testimony before the committee, Shapiro said his family has been in the scrap business for over a hundred years, would like to continue, but there is no longer enough scrap generated in the city to turn a profit. He said he is now leasing the property to another metal processor.

A Pikesville businessman, Shapiro has been a stalwart backer of Kraft. Records at the Maryland Board of Elections show that Shapiro and Cambridge Iron have contributed $8,800 to Kraft’s campaign coffers.

The amendment will mark one of Kraft’s last acts as a councilman. He is retiring from the body in December after serving the First District for 12 years. 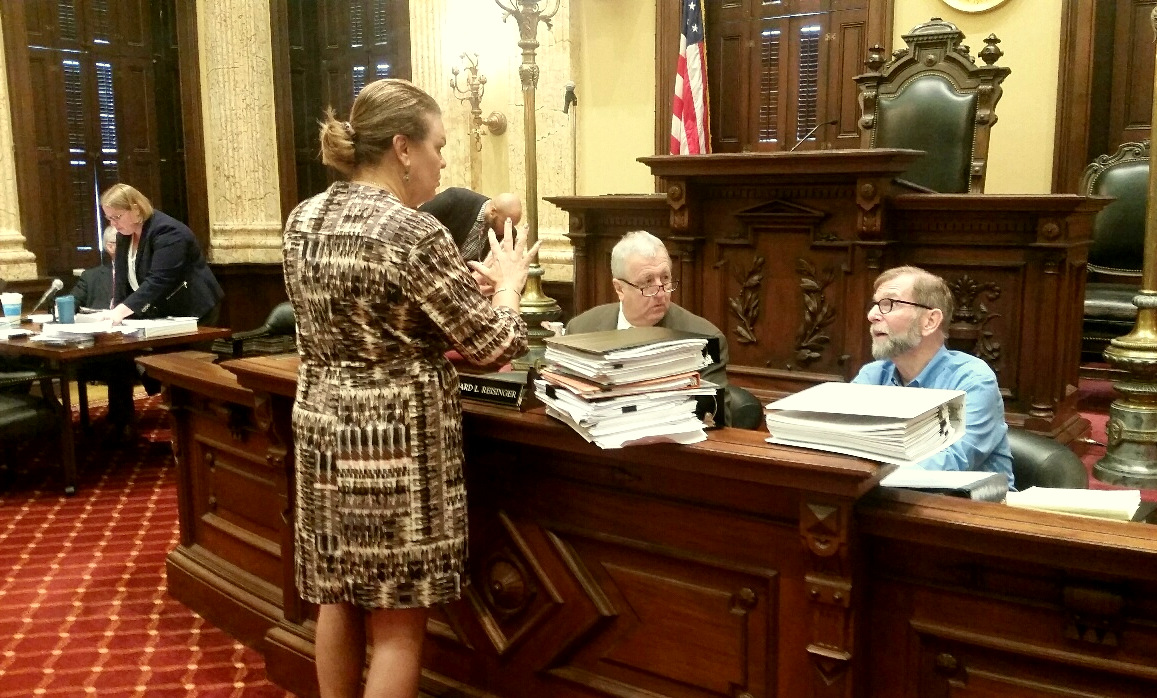 • Port Covington has been granted its own “special purpose” zoning under the TransForm law.

The zone will encompass the 190 acres owned or controlled by Under Armour CEO Kevin Plank that was granted $600 million in tax incentive (TIF) subsidies by the City Council for his proposed transformation of the peninsula.

Existing zoning calls for heavy industrial uses in keeping with its former role as the freight export terminus of the Western Maryland Railway. About 15 years ago, the east side of the peninsula was rezoned to mixed-use retail to accommodate a now-closed Wal-Mart store and former Sam’s Club.

The new zoning will allow for manufacturing uses at the site of Plank’s Sagamore Whiskey Distillery and for retail, hotel, open space and recreation uses between the distillery and the new Under Armour campus. Buildings in this district could reach 100 feet.

North of the distillery, around the Baltimore Sun printing plant (which will be relocated), the new zoning allows for dense development with a wide variety of permitted uses, including apartment towers and high-rise offices, retail outlets, hotels, recreation, entertainment, open spaces and industrial uses. The district has no height restrictions.

For land west of Hanover Street, there will be height limits of 200 feet, allowing Plank’s Sagamore Development company to convert existing properties, such as the Schuster concrete facility, to other uses.