Newly released police body camera footage seems to confirm what police have said and bystanders described – the man holding knives and scaring people on Greenmount Avenue on November 25 was in the midst of a mental health crisis.

“He was standing on the corner with a blank stare on his face, pounding a pole or cane on the cement and incoherently babbling,” said Derek Baumgardner, who happened to be driving by on the day when two police officers, responding to a 911 call, shot the man.

The footage also confirms, say disability rights and civil liberties advocates, something they’ve sought to change for years and that U.S. Department of Justice investigators singled out in a scathing report on the Baltimore Police Department:

The agency’s unconstitutional use of excessive force against people with disabilities.

The body-cam video shows the man, dancing and yelling, ignore multiple commands to drop the knives. But he does not lunge at five police officers and keeps a distance on the empty street, his arms outstretched. About a minute after the officer approaches the man, another officer fires a Taser at him.

Then multiple shots ring out, and the man drops to the ground, bleeding. (Police say he remains at an undisclosed hospital and has not been charged with a crime.)

“The appropriate response would have involved mental health workers skilled at engaging individuals in behavioral health crisis and de-escalating this type of encounter,” she said.

“Resorting to gun violence, causing serious injury and trauma or even death under such circumstances is deplorable,” she said, adding that she has forwarded the video to Justice Department officials.

Critics acknowledge that the public has good reason to resist second-guessing police officers, who are called upon to protect citizens in dangerous, potentially life-threatening situations.

But along with calling for better training of officers, they are pressing for the creation of a crisis response network so that police officers don’t have to be the first responders in such situations.

“We urge Baltimore City to invest in a comprehensive crisis response infrastructure to reduce police interaction with disabled people, avoid costly, needless incarceration and hospitalization and save money and lives,” said Marcus.

“We have been advocating, for years, for changes that would re-orient police to understand that their primary role is defusing a situation,” Curtis said. “Especially when individuals are in distress or under the influence of substance abuse or a disability.”

Curtis pointed to agencies in other cities, such as Camden, N.J. or  Portland, Oregon that have adopted such a model with some success.

The crisis training teaches officers about psychiatric medications, allows them to role-play various scenarios, and gives them opportunities to interact with people who have a mental illness when they are not in crisis. They are taught to “use distance and time” to try to defuse potentially violent encounters.

The critics say there is ample data to back up their contention that the criminalization of disability, often mixed with race discrimination, is at the root of interactions that go needlessly wrong.

Reviewing 2010- 2014 data the ACLU found that 38% of the 109 people who died in police encounters in Maryland presented in a way that suggested a possible medical or mental health issue, disability, substance use or similar issue.

Looking at 2015 data, the ACLU found that nearly half of the 21 people who died in police encounters in Maryland presented in a way that suggested a disability or various crisis issues. About 90% of the encounters involved African-Americans.

U.S. Department of Justice investigators also red-flagged the problem, citing cases that sound strikingly similar to the Greenmount Avenue police shooting, with officers routinely using Tasers in drive-stun mode, which they note “is designed to cause excruciating pain and application can burn a subject’s flesh.”

In many cases, the report said, the painful Taser use “produces no noticeable benefit and “often, if anything, exacerbates the situation.”

The DOJ noted that not all officers have been provided specialized training in how to handle such situations and that “the Department does not have a protocol requiring that a person with this training be dispatched to a crisis call.” 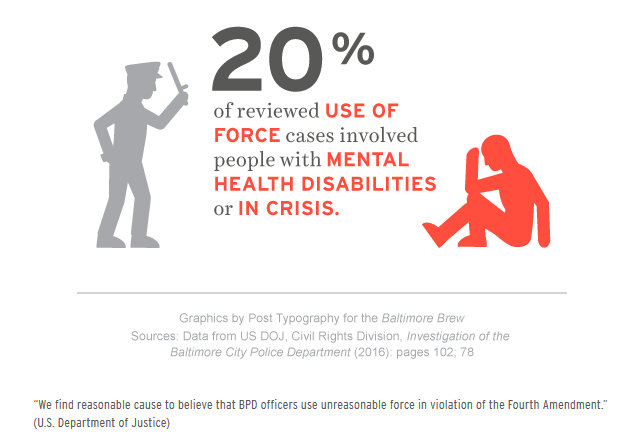 In a 2012 incident included in their report, “Zachary” told a police dispatcher he had a weapon and was “going to do something crazy.”

Instead of calling for back-up, a single officer responded, went to the door and encountered Zachary standing in the doorway with a lit cigarette in one hand and a knife in the other.

“The officer reportedly ordered the man three times to drop the knife and, when he did not comply, the officer fired, killing him,” the DOJ report said.

“After radioing dispatch to inform that he had arrived on the scene, less than two minutes passed before he announced that Zachary had been shot two to three times.”

While acknowledging “insufficient information to make a determination about the shooting itself,” the DOJ report concludes that “the incident shows how different tactics could have changed the outcome.”

Roughly 20% of the use-of-force incidents the Department of Justice investigators reviewed involved people with mental health disabilities or people in crisis.

The investigators determined that BPD’s routine use of unreasonable force constituted 4th Amendment violations and illegal discrimination under the Americans with Disabilities Act.

The idea that police need better strategies and support for dealing with people in crisis is hardly new, either in Baltimore or elsewhere.

As the founder and executive director of the Baltimore Crisis Response, Edgar Wiggins has been involved with the issue for more than two decades. His non-profit offers a wide range of counseling services, a 24-hour crisis hotline that responds to 40,000 calls a year and assorted residential services.

The organization also has a mobile crisis team that, operating from 7 a.m. to midnight, averages 2,500 responses a year.

One thing BCR does not have is “unlimited resources,” Wiggins told The Brew in an interview conducted this summer following the fatal shooting by Baltimore County Police of Korryn Gaines.

“One reason people call police,” he said, “is the police come.”

Since 2004, Wiggins said, he and others have provided training for Baltimore police on how to deal with people in crisis. Wiggins said the training was provided to experienced officers who had been on the street.

“But that changed after a few years,” he said, “when the department said it couldn’t afford to take 25-35 people off the street.”

Providing training to neophytes in their last two weeks at the police academy, he said, “is not optimal.”

Wiggins said he respects officers’ concern about their own safety in interactions with troubled individuals. “I will never knowingly send somebody out if I know there are firearms involved,” he said.

“But everybody has a knife in the house,” he said. He trains his staff on verbal techniques “that decrease the chance of somebody acting out in a violent way. These are the techniques that should be used first.”

“There’s a lot you can do if you make that verbal connection – even with people who are psychotic,” he said. “Police have a lot of the same misconceptions as the general public about mental illness. And race is always a factor.”

Wiggins said he is hopeful that city police will invest in more training and the use of non-police professionals with the skills and time to get people the help they need.

Baltimore Police Commissioner Kevin Davis, he noted, has been working on a pilot program for officers in the Central District, “something that was under discussion before the DOJ report.”

Curtis said efforts are also underway in Annapolis to put together new training standards statewide “and to add the accountability piece by putting civilians on police trial boards.”

Marcus said her group considers the establishment of a coordinated crisis response network in Baltimore “extremely urgent” and a high priority.

Meanwhile Baumgardner, the eyewitness who saw the man on Greenmount Avenue before the police shot him, said he knows city police have a tough challenge and doesn’t blame them.

“The officers who fired at the man did what they were trained to do,” he said.

But that doesn’t mean, he added, that people should be callous or untroubled by what happened that day. “He wasn’t a thug. He was a 48-year-old man with problems.”