By law, Baltimore’s water and sewer funds are supposed to be “financially self-sustaining and operated without profit or loss.”

So why do the city’s own documents forecast that Baltimore’s utility funds will collect $215 million in surplus money – in effect, “profits” – between now and June 2022?

The forecasts, contained in bond buyer reports required by the U.S. Securities and Exchange Commission, undercut the argument for another three-year, 30% rate hike.

They suggest that a rate increase of about 20% over the next three years would satisfy the legal requirement that the funds be self-sustaining.

The Department of Public Works says the 30% increase – up for approval by the mayor and Board of Estimates on January 9 – is essential to finance federally-mandated projects, such as the underground water tanks at Druid Lake.

The bond buyer reports do predict a substantial rise in debt service costs between now and FY 2022 to pay for new construction.

Those same bond buyer reports forecast that DPW would accumulate the following cash surpluses over the same period:

Such surpluses raise serious questions about DPW’s latest proposal to hike city water and sewer rates, according to Mary Grant, who directs  Food & Water Watch’s “Water for All” campaign.

“We don’t know how the city arrives at its rate numbers. Most cities do thorough evaluations of revenue needs and projections to arrive at what their rates will be,” she said.
______________________________________
The information in this article is not available on city websites, but can be downloaded from EMMA, the official source of municipal securities data. Here are the key reports:

“She indicated that they [DPW] had a meeting and just decided on the rates,” Grant said.

The 1978 charter amendment that set up Baltimore’s utility funding mechanism requires that water and sewers funds be “self-supporting at all times” and that rates be adjusted only “if revenues, expenses and changes in equity for the current fiscal year anticipates a loss.”

In a meeting with DPW’s deputy director, “she indicated that they had a meeting and just decided on the rates”  – Mary Grant of Food & Water Watch.

The recommendation, offered in bold type, is about as close as a consultant can come to saying that the city should review its level of rate increases “going forward” after June 2019.

Instead, DPW wants to continue water and sewer increases at the same 10% yearly pace approved by the Board of Estimates during the Rawlings-Blake administration.

The Brew asked DPW to explain the 30% rate increase in light of the fund surpluses forecast in the bond buyer reports.

After days of back-and-forth with the agency, DPW spokesman Jeffrey Raymond provided this response:

“Regarding the statement in the [Raftelis] financial report: We met those requirements without a supplemental rate increase in FY19. The [new] rate increase we requested is fiscally and socially responsible, addressing our ongoing, water, sewer and stormwater needs in the next three years.”

(The response was nearly identical to the statement made by Mayor Pugh when the new rates were announced last month.)

The Brew also asked DPW for rate studies that justified the proposed water and sewer hike.

The agency’s response: “The rate studies remain deliberative and for internal use.”

Grant noted that DPW is counting on rate increases through year 2029 to finance various large-scale construction programs required under the Clean Water Act and a sewer consent decree.

A string of future rate increases through 2029 was disclosed in a memorandum to the Board of Estimates:

Under the law, the city of Baltimore cannot allocate surpluses in its water and sewer accounts to other programs. So why is it highly likely that the mayor and Board of Estimates will approve rate hikes higher than necessary?

While no one will speak on the record, two sources tell The Brew that officials are fearful that the major capital projects now underway, such as at Druid Lake and the Back River Treatment Plant, are liable to end with cost overruns.

Surplus funds generated by the proposed rate hike could be used to  absorb such overruns.

Said one knowledgeable person: “What’s in the [bond buyers] reports are surpluses based on DPW managing its assets properly. Let’s see what happens by 2022.”

The Brew asked DPW for rate studies justifying the proposed hike. The agency’s response: “The rate studies remain deliberative and for internal use.”

The source noted that DPW’s Office of Engineering and Construction is understaffed and has undergone considerable turnover. It relies heavily on private consultants to oversee complicated projects that can easily exceed their budget.

DPW Director Chow has asserted that large contracts have tight cost controls, with overruns falling on the shoulders of contractors, not the city.

But there is a long history of cost overruns in DPW contracts, including by the agency’s “go-to” sewer contractor, Spiniello Cos. (here and here), and “EWOs” (extra work orders) at the Back River and Patapsco treatment plants.

Baltimore has been in violation of the Clean Water Act ever since the law was signed by former President Richard Nixon in 1972.

In 2002, the Martin O’Malley administration entered a consent decree with the Environmental Protection Agency (EPA) and Maryland Department of the Environment, promising to end decades of sewage overflows and dumping into local waterways and the Chesapeake Bay.

With few compliance measures completed by 2016, the city got an extension to 2022 to end the majority of sewage dumping into the Jones Falls – and a 2030 deadline to make other improvements.

Baltimore has been in violation of the Clean Water Act ever since the law was signed by former President Richard Nixon in 1972.

DPW fell years behind complying with the new standards at its Druid Lake and Lake Ashburton finished water reservoirs.

Much of the delay occurred after Chow decided to scrap EPA-approved plans put forth by the Sheila Dixon administration to install ultraviolet (UV) treatment facilities in favor of the underground tanks.

The decision, which Chow justified as to the long-run advantage of the city, increased the cost of the projects by roughly four times to the current price tag of $300 million, including design and construction.

The projects are scheduled to be completed in 2022.

Another project that DPW has cited to justify its latest rate increase is the Fullerton Water Filtration Plant.

“Construction of the proposed new plant alone is estimated at $635 million,” DPW said in its memorandum to the Board of Estimates.

The yellow lines show the expected annual “Revenue Available After Debt Service” – that is, cash surplus – in the two accounts through FY 2023. 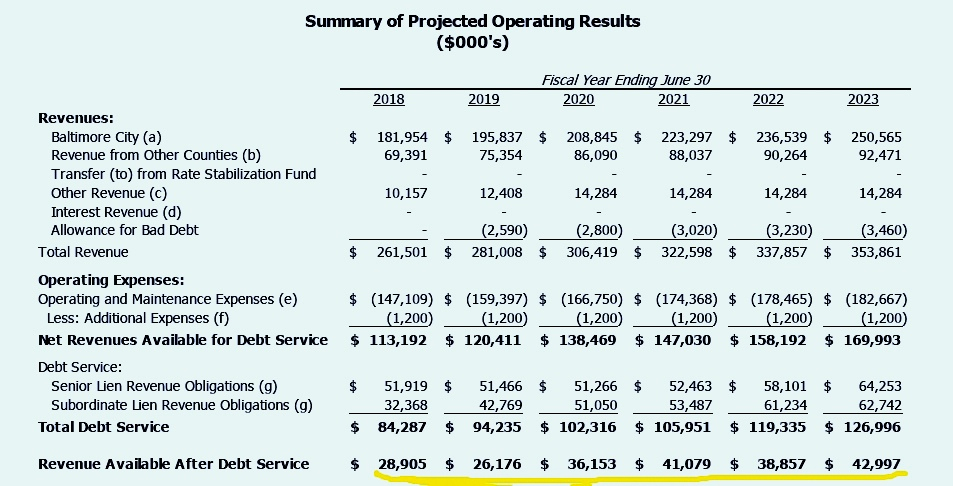 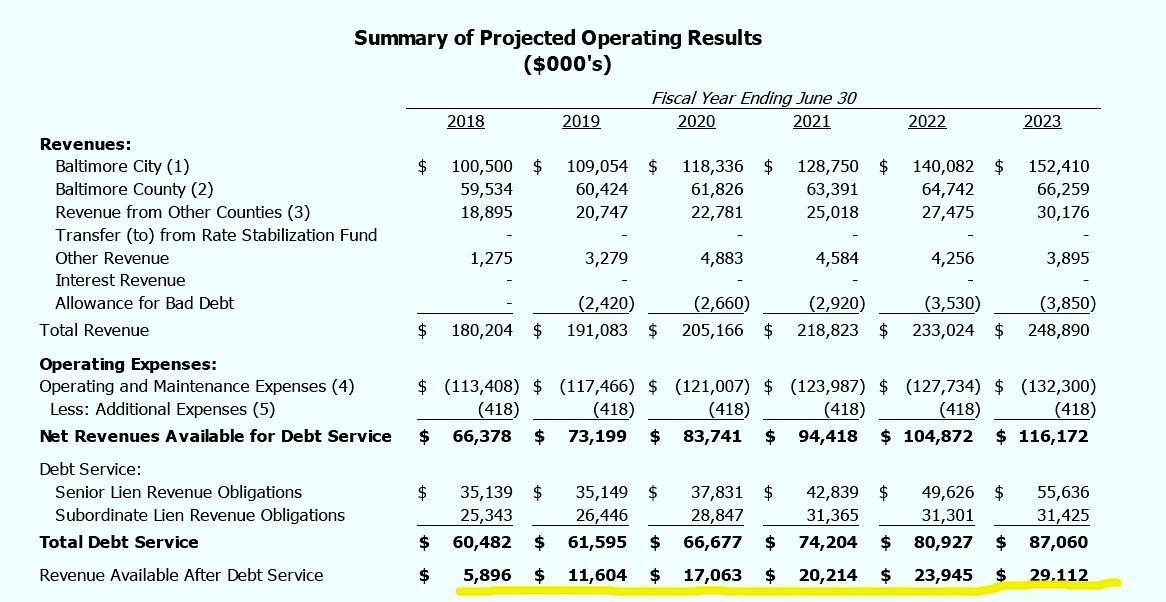