When the city sold part of the Hendler Creamery site to Kevin Johnson six years ago for no money down, he promised a luxury development to lift up a non-waterfront area of Baltimore and a sensitive design that would preserve the shell of the historic ice cream packing building.

Last night, not far from where the stalled project has stood for a year as a rubble-strewn mess, Johnson explained the delay and outlined a possible new development plan:

Moderate-priced rental units and a design that may mean demolishing the historic facade altogether.

Why did he stop work after tearing down most of the buildings on the site of the planned $75 million project?

Councilman Robert Stokes interrupted Johnson from the audience to make a correction, instructing him to say, “The Unrest, not the riots.”

“I’m so sorry,” Johnson replied. “I used the wrong term. I appreciate you correcting me. The Unrest.” 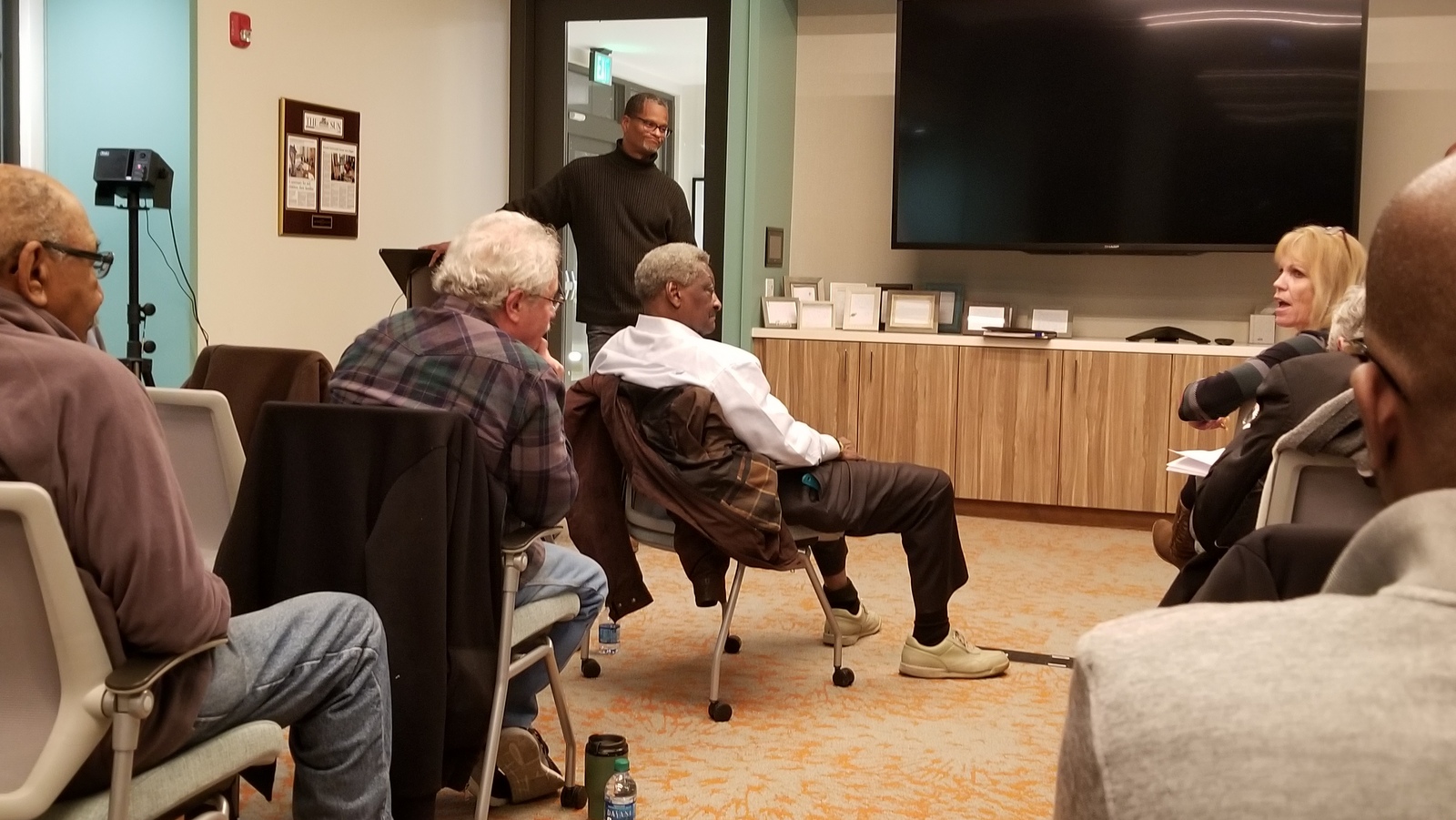 Kevin Johnson, at the doorway, speaks with the Jonestown Planning Council about the Hendler Creamery project. (Ed Gunts)

The chief executive of the Hanover-based Commercial Group was by turns remorseful, defensive, self-deprecating and upbeat as he addressed a roomful of community leaders and stakeholders at the Ronald McDonald House, including State Delegate Brooke Lierman.

He was apologetic about leaving a pile of construction debris behind, but failed to make any commitment as to when the site will be cleaned up or when the project might resume.

“After spending $7 million, nobody is more invested than I am,” he declared. “You have my 100% commitment that the site will get developed.”

Johnson failed to make any commitment as to when the site will be cleaned up or when the project might resume.

During a 30-minute presentation, Johnson admitted he’ll likely never complete the upscale rental project he originally promised for the former Hendler site in the 1100 block of East Baltimore Street. He said he now envisions a smaller project aimed at a less affluent pool of renters.

• Instead of 296 apartments and 218 parking spaces over six levels, he’s thinking about 200 units in one or more buildings rising no more than four stories and a surface parking lot for about 60 cars.

• Instead of competing for the same renters who are leasing waterfront apartments at Harbor Point and Harbor East, he’s thinking about building housing for “teachers, fire fighters and nurses.”

• Instead of preserving two original facades from the 1892 building as approved by CHAP, the city’s preservation commission, he said he may need to reduce the amount he is saving – or take down the facades altogether.

The currently propped-up facade may have to be demolished for the site to be developed, Johnson now says. (Ed Gunts)

Envisioned as an Anchor

The Hendler, as the project was known, was expected to be one of the anchors of a revitalized Jonestown, along with the Ronald McDonald House and the National Aquarium’s Animal Care and Rescue Center.

Explaining the year-long construction delay, Johnson said his group had planned to sell to site to a third party, which was going to carry out his vision for the site, but backed out after the 2015 unrest.

“I certainly intended on erecting a building when I demolished the site. Unfortunately, I was not able to get to closing,” he said.

“So I did have to step back for four to five months and kind of regroup, just to get my mojo back. And so I’ve done that.”

Now that he has regrouped, Johnson said he is ready to pursue a new vision for the site: “affordable housing, workforce housing.”

Not explaining what he meant by those terms, he left some audience members wondering what commitments he had actually made. “What did he really say? Was there anything concrete?” grumbled one person after the meeting concluded. 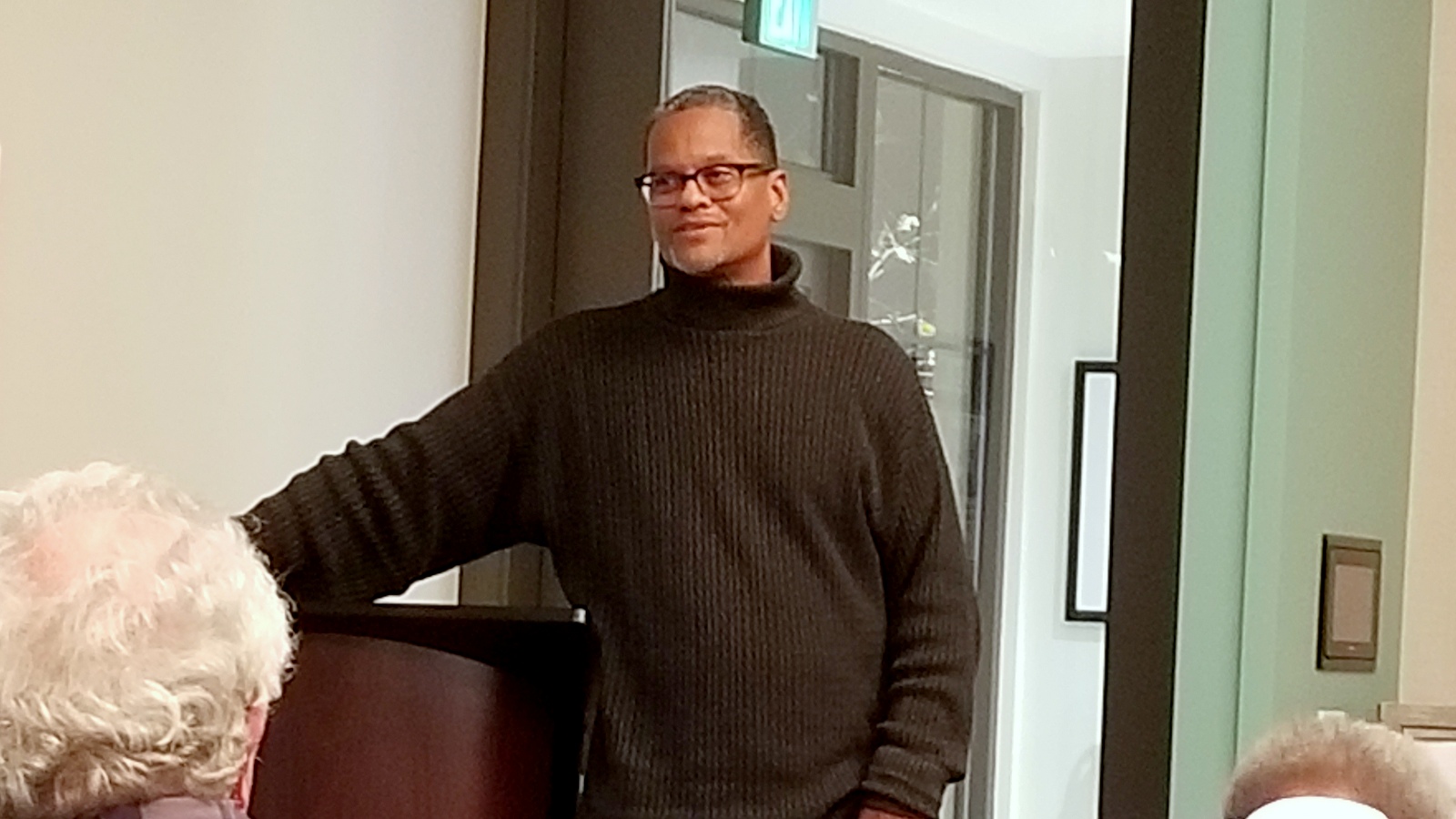 Kevin Johnson: “It’s a little too early to make commitments” about how he would proceed on a project scheduled to be finished years ago. (Ed Gunts)

The developer said he does not yet have a figure for how much his downsized project would cost, and said he planned to explore all possible sources of funding, including tax credits for affordable housing.

What about a timetable?

He spoke of a three-month conceptual design phase until February 2020, and said “designing the site” will take nine months after that.

What about the two salvaged brick facades from the creamery, one along Baltimore Street and one along East Street?

Johnson said his first choice would be to save both and incorporate them into the new development. “Step 1, Goal 1 is to retain the historic facades,” he said.

Several audience members asked Johnson if he could clean up the rubble as soon as possible.

“The first thing we would really like you to do is to clean it up,” said Ronald McDonald House Charities President and CEO Sandy Pagnotti, referring to the site. “Even if nothing happened there, if the rubble would go away, it would be awesome.”

Saying “it’s a little too early to be making any commitments,” Johnson talked about “wrapping” the construction fence in order to block views into the property.