Strong City Baltimore, the fiscal sponsor organization whose financial disarray last year drew complaints from clients and alarm from foundations, mistakenly sent sensitive financial statements for hundreds of client organizations to people who were not, it appears, supposed to get them.

One of the unintended recipients was Lola B. Pierson, artistic director of The Acme Corporation, who said her small Baltimore-based theater company had stopped using Strong City as a fiscal sponsor.

When she opened the email from Strong City yesterday, Pierson said, she was astonished by what was inside.

It included an attachment with files for a wide range of organizations, from small neighborhood associations to larger entities such as Impact Hub, showing financial reports for the last six months of 2020.

“I couldn’t believe what I was seeing. It was completely inappropriate for them to send them to me,” said Pierson, who said she immediately reported what happened to the Office of the Inspector General for Baltimore.

“At first, I thought it was malware,” said another recipient, Fagan Harris, president and CEO of Baltimore Corps, which he said had severed ties with Strong City about 18 months ago.

After discussing the Strong City email with his organization’s general counsel, Harris said, he concluded it was not some sort of phishing scam from a hacker.

“It really was sent by Strong City,” Harris said. “It was just sloppy and bizarre.”

The Brew reported in August that the IG began a probe into Strong City, whose client organizations receive large sums from city, state and federal programs and through grants from local foundations. Headquartered in a newly renovated East Baltimore factory building, the organization claims more than $14 million in assets.

That investigation was commenced following The Brew’s disclosure that many clients had for months been unable to access the funds Strong City was holding for them.

Clients described missing invoices and bounced checks. Some of the city’s biggest nonprofit funders stopped financial dealings with the organization.

Fiscal sponsors, such as Strong City, lend grassroots groups their 501(c)(3) nonprofit status and manage their grants, payroll and other administrative needs in return for a fee.

In the wake of the 2015 Uprising, Strong City rapidly expanded its scope to help grassroots and community groups obtain and manage funds that were becoming available from the Baltimore Children & Youth Fund and other public and private sources.

But leaders of these organizations – just the kind of Black-led grassroots groups meant to benefit from the gush of grant money – said they were stressed and struggling because of lack of communication and mismanagement by Strong City.

“We have reached a breaking point,” said a letter written last July to Strong City by a coalition of 19 client organizations, complaining of inaccurate and delayed financial statements, fouled-up receivables and invoices, delayed and blocked payments.

In response, Strong City made a number of leadership changes and promised to right the ship.

“Our board, leadership, staff have been working tirelessly to identify, isolate and address our challenges,” Davis said at a September news conference in the wake of the disclosures.

Need for an Audit

Since the story broke last year, however, clients still have not been able to access funds and “basically nothing has changed,” according to Impact Hub Executive Director Michelle Geiss, who led the coalition of clients who complained about Strong City’s practices.

“We tried to work with Strong City, we went to the press, some clients have pursued legal avenues, but it’s still stagnant,” Geiss said today.

“There needs to be a forensic audit,” she continued. “People keep saying someone needs to go in and look at their finances, but somehow it doesn’t seem to have happened.”

Yesterday, Pierson forwarded Geiss the strange Strong City email, but by the time she got to it, Geiss said, the links to financial statements were disabled.

“Terrible from the get-go”

The email’s subject line says “675 – ACME Corporation – Preliminary JULY 2020 – DECEMBER 2020 Statement,” but goes on to include the link to more than 280 files from other groups.

This is the text, with odd spacing and in multiple font sizes and colors, that follows: 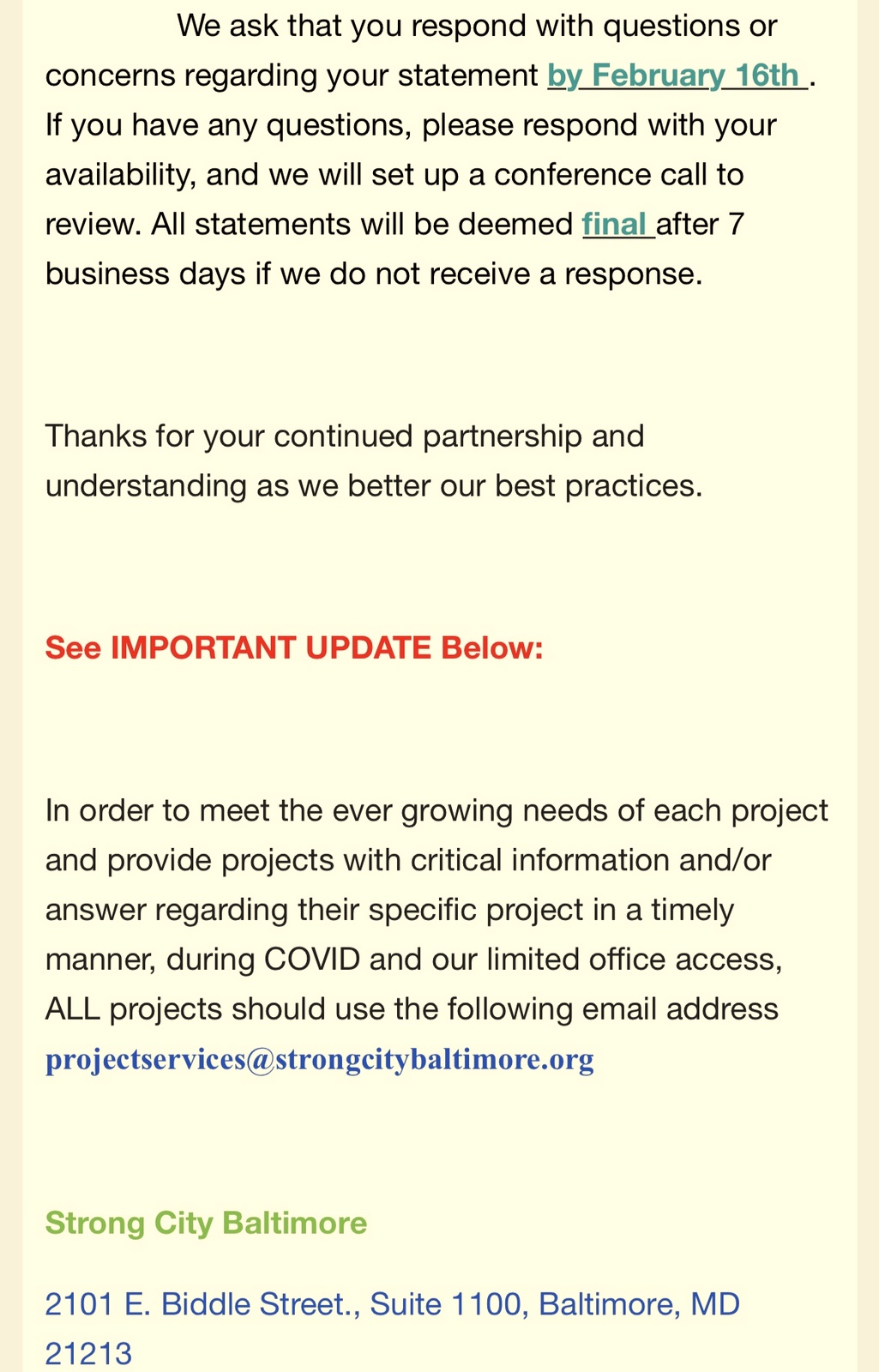 Portion of the email Lola Pierson received from Strong City on February 11.

Pierson said the apparent error and privacy breach did not surprise her given her negative experience with Strong City.

“They were terrible from the get-go,” she said, describing “agonizing” efforts to separate from Strong City about 18 months ago.

She cited “their lack of transparency,” failure to return emails or provide them access to their funds, double-charging donors at one point and other problems.

Even though Acme has a new fiscal sponsor and in her view no financial obligations to Strong City, Pierson said, “they emailed a month ago and demanded $300.”

The playwright, who tweeted about her Strong City email yesterday, said she is watching what happens to the group now with interest.

“I didn’t think they could top themselves, but with this latest incident I think they did.”