Lewis Sharpe has always had a vision for the Duncan Street Miracle Garden. He shared it with The Brew last year – a pavilion for seniors, a playground and even some chickens.

In its heyday, the garden produced 10,000 pounds of fresh produce a year for Baltimore’s Broadway East community. Last August in the midst of the pandemic, the plot was overrun by weeds and trash.

Volunteers, concerned about Covid, were staying away, and Sharpe, the garden’s steward since 1988, had been slowed down by his own health problems.

It was clear he needed resources and help.

Yesterday he got both, as local officials from Amazon showed up with a $10,000 check and a group of volunteers.

“I appreciate all the people that have given me help to do this garden,” the 82-year-old said, addressing a ceremonial gathering of community members and city officials.

Aside from college students who came to help off and on, Sharpe said, “I went a long long, a whole lot of years by myself, when I ain’t have no help.”

“Last year, the Baltimore Amazon community learned about Mr. Sharpe and his efforts to keep the garden afloat during the pandemic,” Davis said. “In the fall, the Broadway East community became a food desert after its only remaining grocery store providing access to fresh produce closed.”

“The Baltimore Brew’s coverage,” spokeswoman Emily Hawkins added, “is what drew the attention of our fulfillment center employees and sparked the donation.” 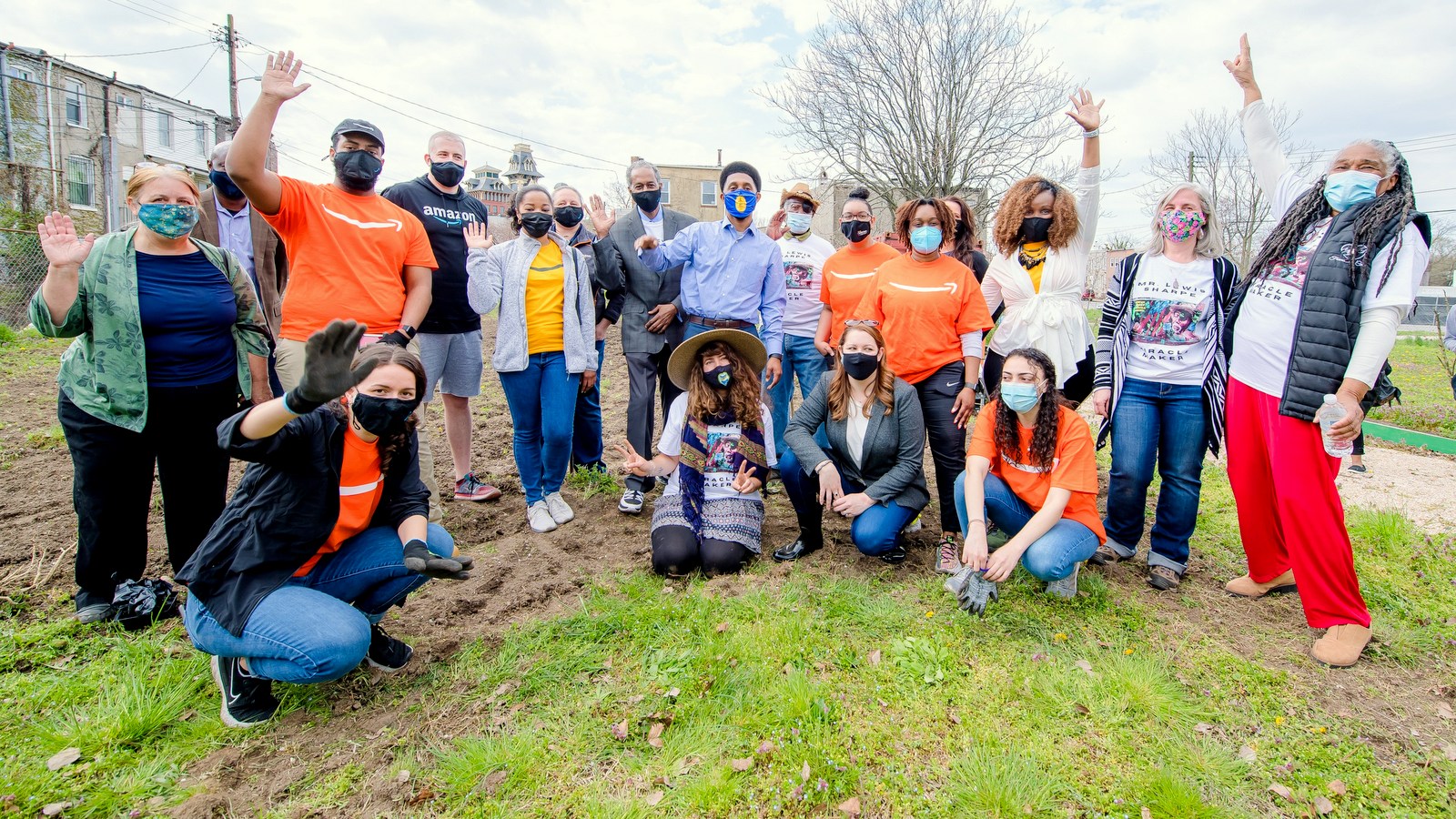 A longtime hub for several proud but underserved neighborhoods, the half-acre plot sits at the intersection of Duncan Street and North Avenue.

“There have been times of despair, but this is a wonderful morning,” said Doris Minor-Terrell, president of the Broadway East Community Association, which will use the Amazon donation to support the garden’s 2021 planting season, purchase equipment and fund a community garden program.

Davis said Amazon employee volunteers will stay involved and that the donation is oriented toward “long-term sustainable solutions that will support the garden for years to come.”

“The perfect example of collaboration for the greater good,” says Mayor Scott.

“We have, like, six community associations that encompass North Avenue. So this is just the first piece of what we want to do with other neighborhoods,” Stokes said.

Mayor Scott lauded the groups and individuals who came together to help Sharpe and the garden, including Baltimore Green Space and the volunteers in orange tee shirts from Amazon.

“The Miracle Garden is the perfect example of collaboration for the greater good and this collaboration and selflessness embodies the true beauty of Baltimore,” Scott said.

Then they got to work.

Sporting suits and sneakers, Scott and Stokes joined the volunteers in their work clothes, to help put broccoli, collard greens and other plants in the ground. 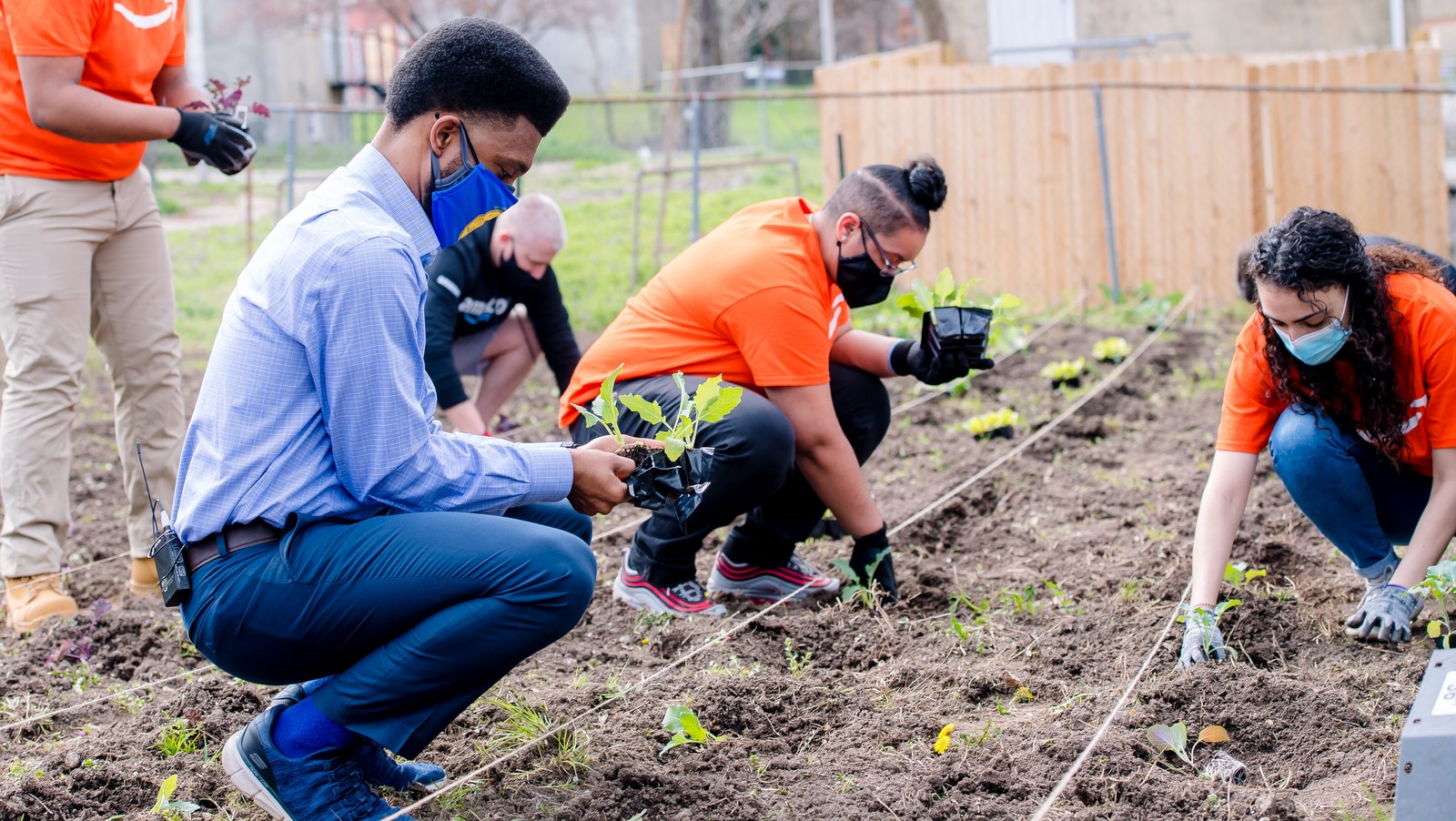 Grinning from ear to ear, Sharpe watched the busy scene and told anyone who listened about that dream of his.

“Right in that lot right there,” he said, pointing to the spot. “I’m trying to get a senior citizen pavilion, and I want flushing toilets, radios, televisions. Anything they need.”