The Brew has obtained a draft bill, prepared on behalf of Baltimore County Executive Johnny Olszewski, that would abolish the independence and restrict the investigative powers of Inspector General Kelly Madigan, who Olszewski appointed 18 months ago to root out waste, fraud and corruption in county government.

The bill, so far publicly undisclosed, would allow an Oversight Board packed with political appointees – three designated by Olszewski, two designated by County Council Chair Julian E. Jones, and two mutually agreed upon – to restrict and control future investigations by the IG.

In May, Jones attacked Madigan during a Council budget hearing, saying he had “buyer’s remorse” over the 2018 legislation that established the office.

He was joined by Middle River Councilwoman Cathy Bevins, who castigated Madigan for overspending county funds (by $59, she said) on double-sided business cards and for “giving Baltimore County a black eye.”

As this story was posted, the bill was still not disclosed on the Council’s website.

Sources tell The Brew the bill will be introduced at the Council’s meeting on Tuesday (July 6) by Jones “by request of county executive,” according to the bill’s language.

After extensive coverage by The Brew, McCollum tendered his resignation, effective today, as the $135,000-a-year deputy director at the Department of Economic and Workforce Development.

The 13-page draft bill would rewrite the Office of the Inspector General statues to:

• Limit the watchdog’s access to county records, preventing the office from obtaining “records, data, reports, contracts, correspondence or other documents that are protected, confidential or privileged,” which could hide administration decisions under the cloak of executive privilege.

• Remove the power of subpoenas to be judicially enforced.

• Require the IG to submit to the Oversight Board “a work plan that clearly defines the purpose and scope of [an] investigation, the methodologies to be used and the manner in which the work will be conducted.”

• Give a county employee accused of corrupt or wasteful behavior 10 days to rebut the IG findings.

• Restrict the IG from conducting a joint investigation with other law enforcement agencies.

• Allow the Oversight Board to fire the IG “with cause” and to “receive, review and refer to the appropriate county department complaints about the Inspector General.”

It is unclear from the bill’s language who would be the “appropriate county department” that gets complaints about the IG.

An informed source says it potentially could mean that the County Police Department will be asked to investigate the County Inspector General.

Madigan: I was kept in the dark

Reached today, Madigan criticized the draft bill, saying it “removes the independence of the inspector general as well as limits the ability of the IG to do their job.”

Madigan said the administration recently showed her the bill, “but I was not part of the drafting of the bill.”

She said she noted “some particularly problematic aspects of the bill.” But except for some technical points, none of the problems she cited was changed in the bill, she said, and she has still not received the final draft copy of the legislation. 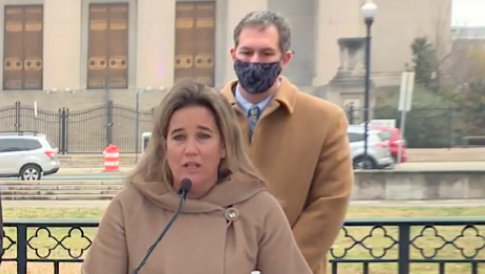 County Executive Olszewski shared in the limelight last December at the public release of a report by Madigan and Baltimore City’s IG of billing errors in the water system shared by the city and county. (Charm TV)

The bill comes in the wake of two reports by Madigan’s office on  alleged misspending by McCollum during the years he was director of the Ag Center in Hunt Valley.

The first report detailed more than $1 million spent by McCollum under the administration of Kevin Kamenetz.

In pursuit of an ill-fated program to grow crops for homeless shelters and food banks, McCollum ordered a $629,000 greenhouse that was rarely used and over $500,000 on state-of-the-art tractors, tillers, planters and plows, Madigan reported.

The report that really stung the administration and Bevins was issued in April.

Madigan reported that McCollum had made $30,000 in unauthorized purchases of farm equipment, kitchen appliances, clothes, snow blowers and even women’s boots.

In many cases, he used multiple county credit cards to split larger purchases in order to circumvent the $1,000 individual-purchase limit placed on the cards.

Bevins blasted Madigan’s report on the Ag Center without disclosing her relationship with McCollum, who has long served as her campaign treasurer and election manager.

At the same hearing, Council Chair Jones accused Madigan of both “terrifying” county employees and issuing a “fluff” report on McCollum.

Councilman Tom Quirk also piled it on – over objections by Councilmen Izzy Patoka and Todd K. Crandell – by suggesting that the IG had too much power.

Bevins, Jones and Quirk are part of the Baltimore County Victory Slate set up by Jim Smith, which has funneled tens of thousands in election dollars to the three politicians over the years.

The treasurer of the Victory Slate is Chris McCollum, who received cash payments from both the Slate and Bevin’s campaign that were not reported on his county financial disclosure statement.

(After The Brew requested his statement under the Maryland Public Information Act, McCollum amended it to disclose he was paid by the two entities.)

After he was elected county executive in 2018, Olszewski transferred McCollum from the Ag Center to the Department of Economic and Workforce Development, where he has served as a deputy director and. for several months in 2020, as acting director.

McCollum’s resignation was disclosed by Olszewski’s press office shortly before The Brew disclosed $20,000 worth of contributions that McCollum had arranged for Olszewski’s campaign committee and for a slate committee chaired by the county executive’s brother.
_____________
To reach this reporter: reuttermark@yahoo.com