When she heard the sound of the demolition crew clawing down the trio of pre-Civil War houses on the other side of her block, Sonia Eaddy was in her Poppleton home, preparing for a meeting about how to save the area’s historic structures and keep residents from being displaced by development.

Eaddy immediately texted UMBC professor Nicole King, who at that very moment was working with a lawyer on an emergency CHAP landmark application for the historic structures on Eaddy’s block – including 1106 West Saratoga Street, the former home of a famous political boss, John S. “Frank” Kelly.

“They’re tearing down the Boss Kelly House!” Eaddy told King, who rushed over to the West Baltimore neighborhood yesterday.

“I cannot believe this,” said a livid King, who had worked with Organize Poppleton on a rally two days earlier to support Eaddy (whose home is being taken by the city by eminent domain) and residents of Sarah Ann Street (who are defying the city’s order that they leave their homes, a row of historic alley houses inhabited by Black residents since the Civil War era.)

Bricks crashed down and dust clouds boiled up in the 90-degree heat as the Boss Kelly House and two adjoining buildings were leveled.

The roughly 175-year-old Kelly house was vacant, basically left to deteriorate after being purchased by the city from a private owner in 2009 for $162,750.

“I feel like they’re targeting me. The city knew we were fighting to have these houses preserved”  – Sonia Eaddy.

Residents had sought to capitalize on the house’s historic value – it was similar in age to the stone workers’ houses whose demolition in Woodberry  caused an uproar in 2019 and led to the neighborhood’s historic designation.

Eaddy and King especially wanted a halt to the displacement of people who occupy homes on the Sarah Ann block, an oasis amid a landscape of disinvestment, blight and a largely failed city-subsidized development project.

“I feel like this was done to make the area we’re trying to save less significant,” King said, as workers from demolition contractor K&K Adams fenced off the spot and reduced the buildings to rubble.

“I feel like they’re targeting me, it’s a deliberate attack on me,” said Eaddy, who struggled to maintain her composure. “The city knew we were fighting to have these houses preserved.” 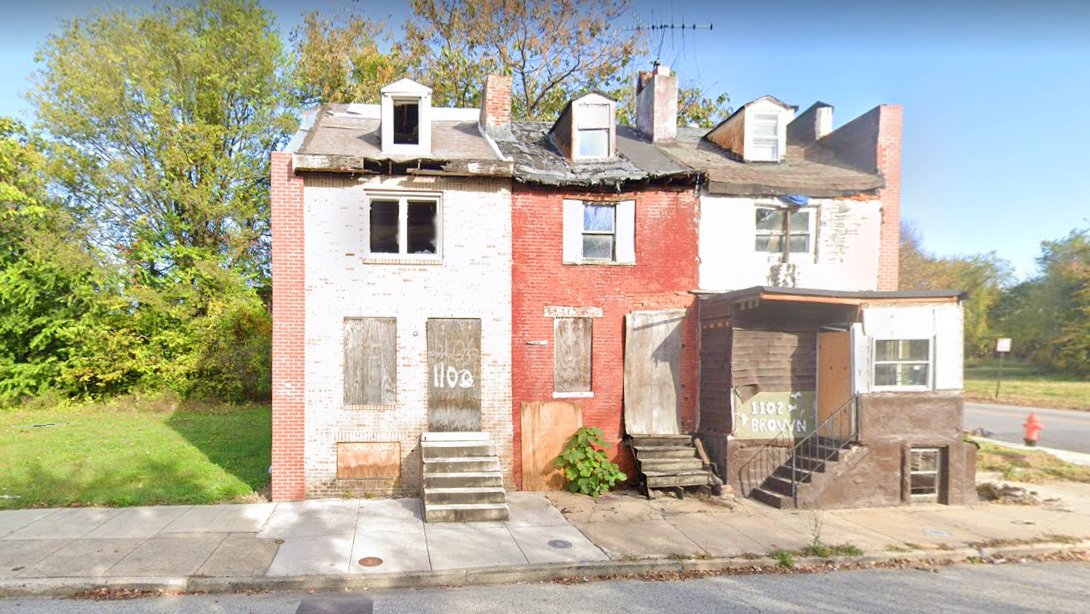 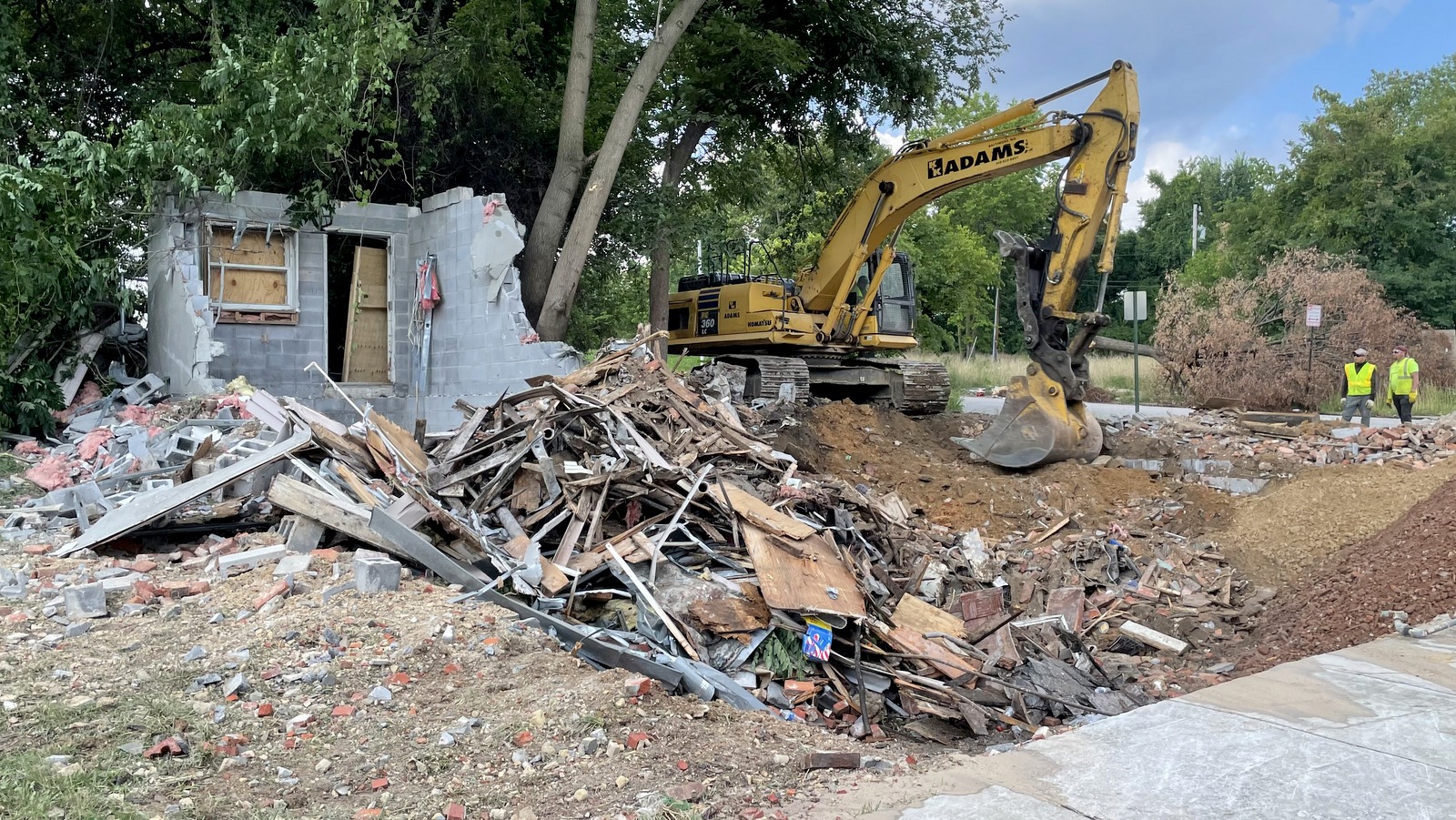 The demolition crew pauses yesterday afternoon after knocking down the houses at Saratoga and Arlington streets. (Fern Shen)

Eaddy, King and a growing cadre of allies have been trying for months to stop the Department of Housing and Community Development (HCD) from pushing residents out and pleading with Mayor Brandon Scott and City Council President Nick Mosby to intervene.

They have gotten no response from City Hall until last night after photos The Brew tweeted of the demolition in progress began circulating.

“I am aware of the situation in Poppleton and have directed the acting housing commissioner to engage area residents and the developer in dialogue around these concerns, which stem from a legal agreement the city entered into two decades ago,” Scott tweeted at 7:16 p.m.

“My administration is committed to reaching an equitable solution that prioritizes community voices, and will present recommendations promptly,” the mayor continued. 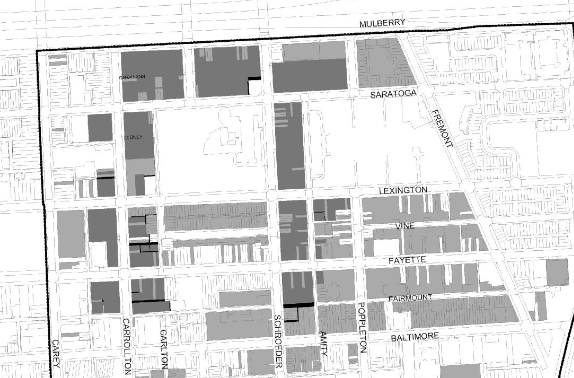 A map of Poppleton shows (in shades of gray) the properties acquired – and to be acquired – for redevelopment. The Boss Kelly house was located in the gray block at the uppermost left. (Poppleton MOU Exhibit, Board of Estimates, November 21, 2016)

Housing officials said this morning that Acting Commissioner Alice Kennedy plans to meet with residents of Sarah Ann Street as well as convene a meeting with the community “to provide an update on plans” for Poppleton.

The statement did not address demands for a moratorium on the displacement of Sarah Ann residents by the agency.

Poppleton has been targeted for redevelopment since 2005 when a New York developer, La Cité, was given rights to a 14-block area. In 2015, the company was awarded $58.6 million in tax increment (TIF) public financing.

After promising retail space and 1,600 new homes, the developer has only built two partially-occupied apartment buildings on Schroeder Street, about eight blocks from the Boss Kelly house.

HCD, meanwhile, has continued to acquire and demolish the neighborhood’s rowhouses.

Asked to explain yesterday’s demolition, the agency responded with a written statement that demolition notices were posted on the Kelly and adjoining houses in March.

“Once the notices were posted and questions were raised, HCD placed a hold on the demo and then confirmed that this property was not part of the group of historic properties in the area.

“The developer,” the statement continued, “determined that the property was not salvageable and HCD was advised that the community group (Poppleton Now) and leadership did not object to this action. Demolition notices have been posted since April, and HCD’s contractor commenced with the demolition on July 12 as part of their normal rotation of work.”

Calls to Stop the Demolition

King and Eaddy, who has been president of Poppleton Now but whose leadership has been challenged, have struggled to get assistance from those with the power to act.

Early this year, they sought help from the Southwest Partnership (SWP), the umbrella group representing  Poppleton as well as “anchor institutions” like the University of Maryland medical complex and Grace Medical Center.

The chairman of SWP’s Preservation Committee, Scott Kashnow, said last night he brought the issue to the group’s board in February and again in March, at that point asking the group to call for a temporary moratorium on all non-emergency demolition in Poppleton.

“One [letter] requested a Memorandum of Agreement to be completed by all parties and the second a moratorium on demolition,” Kashnow told The Brew. The board approved sending the letters, but King discovered, to her surprise, that the letters were never sent.

It was not until after a second Board vote in June that the letters were finally sent out.

“It seems that the new leadership of Southwest Partnership is working with the La Cite developers and against residents being displaced from their homes,” King said today. “It is really a shame and does a great disservice to residents.”

The June 24 letters were sent to Scott, Mosby, HCD and a host of other agencies. Kashnow said he has not gotten a response from any of them.

Last night, the Preservation Committee voted to support a request to the city’s CHAP preservation body asking for an emergency stay of demolition.

Yesterday’s demolition of the Boss Kelly House was especially disappointing, Kashnow said, in an email.

“It is absolutely terrible that the neighborhood is being taken apart a piece at a time and neighbors are losing their homes. It’s not right.”

As residents were reacting to the demolition on one side of the block, they had second surprise on the other side of the block – a large deep hole that opened up in the Carrollton Avenue road surface.

To prevent people or cars from falling into it, residents positioned one of the big, green city trash cans in the sinkhole and placed tires on either side. Another person later grabbed some orange cones from the demolition site on Saratoga Street and added them to the spot. 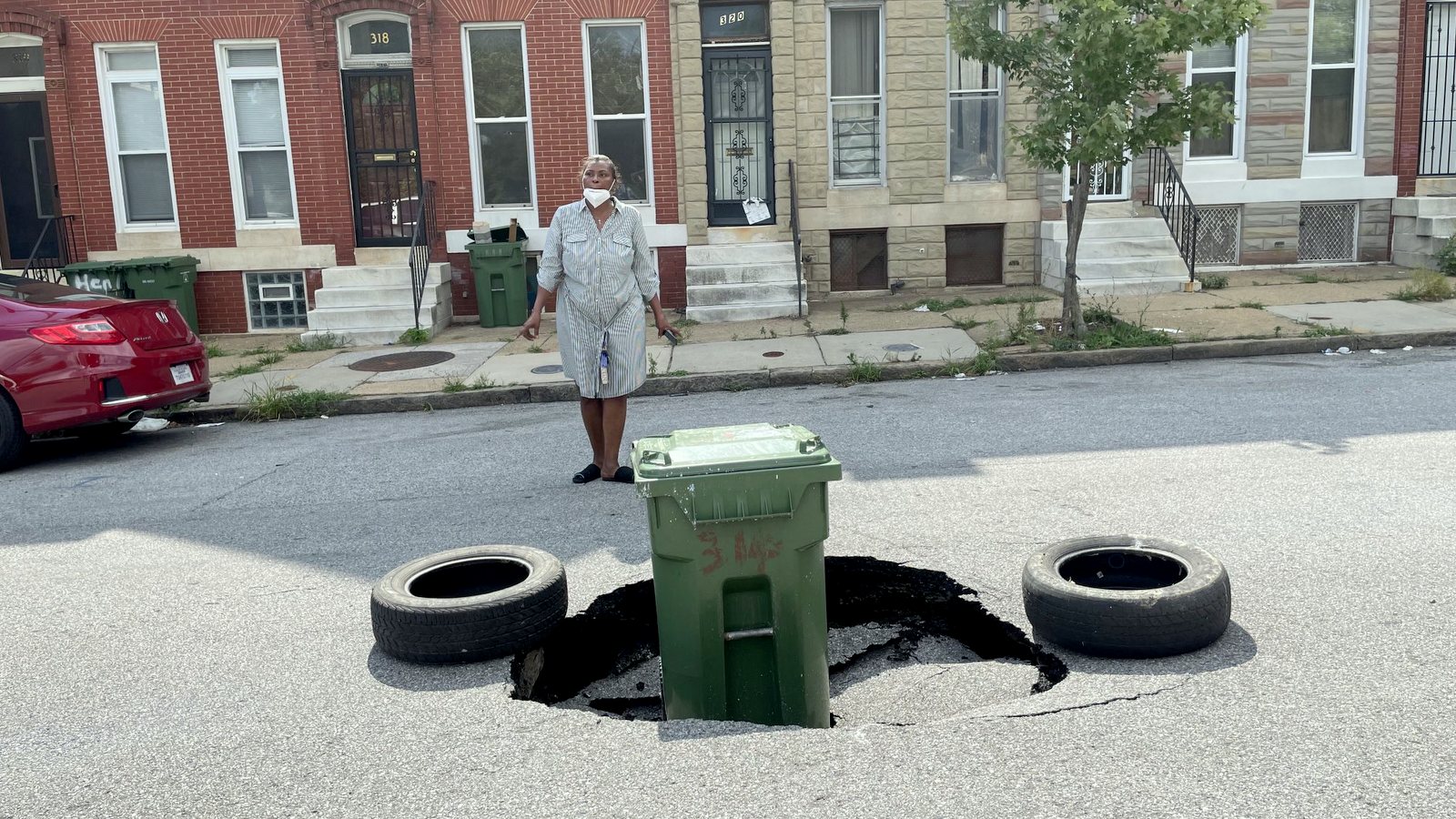 A resident points out the large hole that opened up in Carrollton Avenue where trucks carrying demolition rubble were driving. (Fern Shen)

The hole was directly across from Sarah Ann Street Park, the tidy green gathering place residents created themselves, enhancing it with a donated metal swing set.

Why had the hole suddenly appeared?

Throughout the day, Eaddy said, K&K Adams trucks carrying bricks, beams and other debris from the demolished houses had rumbled up and down the street.

—Mark Reutter contributed to this story.