Mayor Brandon Scott had just held an upbeat press conference downtown and about two miles away, Denise Knight was watching clips from it on the morning news:

“We have great news to share,” Scott said, announcing he was lifting the precautionary “boil water” advisory issued four days earlier in the city and region after routine testing showed E. coli contamination in Knight’s neighborhood of Harlem Park.

Was the 64-year-old ready to go back to drinking water from the tap?

“No way! I’m not buying it! Does he think I’m some kind of dizzy blonde?” Knight cracked, turning serious as she pointed to the part of the news conference that struck her as key:

The Scott administration acknowledged they have not determined the cause of the bacterial contamination.

“How dare you insult my intelligence,” Knight exclaimed. “You’re telling me you did a couple of tests yesterday, and now the water’s okay? No! What’s to stop this from happening again?”

Another reason for her skepticism – the condition of the water in her bathtub after she ran the water for three hours last night:

it was yellowish brown with floating grit. 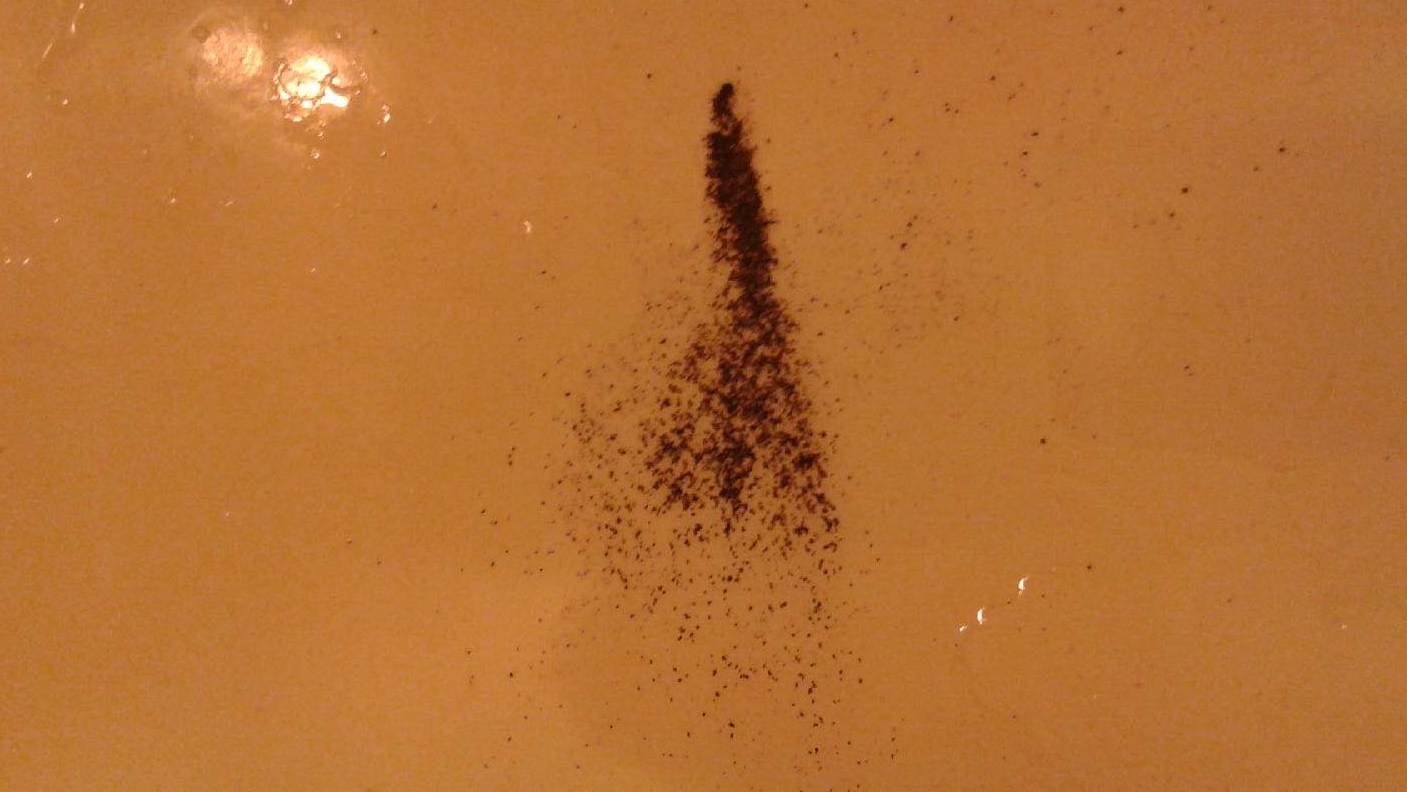 As Knight spoke from the open second-floor window of her home on Calhoun Street, she could see the stream of cars continue to pull up to Harlem Park Elementary Middle School, where city workers were still handing out cases of bottled water. (The free water there ends tomorrow at noon, city officials announced.)

One motorist said she had heard about Scott’s announcement but was still anxious about city water and and planned to keep getting the give-away bottled kind as long as possible.

“We’re going to keep boiling it for at least a week,” the woman said. “I can’t believe we pay our water bills and this is what we have to do.”

Some, like Sandra Holmes, have no car and so have been coming by foot to get their water.

“It’s just been a mess for the last four days,” said Holmes, who was using a metal shopping cart to wheel her two cases of water the four blocks back home. 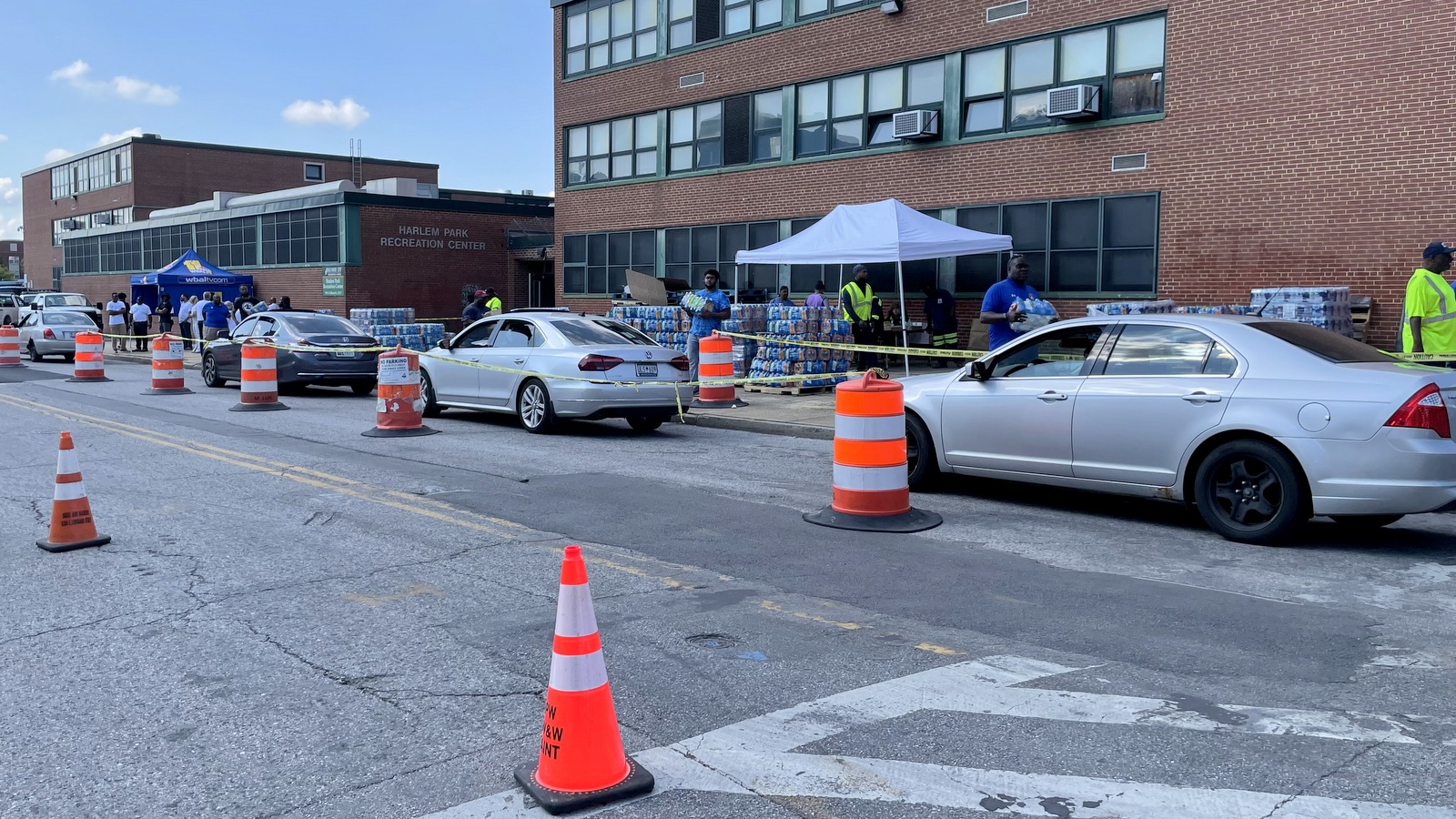 City officials said they have distributed over 103,000 gallons of water to residents after E. coli was discovered in the drinking water. Shown here: the Harlem Park Elementary/Middle School site today. (Fern Shen)

Holmes has been boiling water and as well as journeying back and forth to get water from the school distribution site. Like Knight, she had heard about Scott lifting the boil water advisory, but didn’t trust it.

“DPW said [the E. coli] is out of the system, but I don’t know whether that’s true, especially because I live in an apartment building, and I don’t know if everything’s been flushed out.” 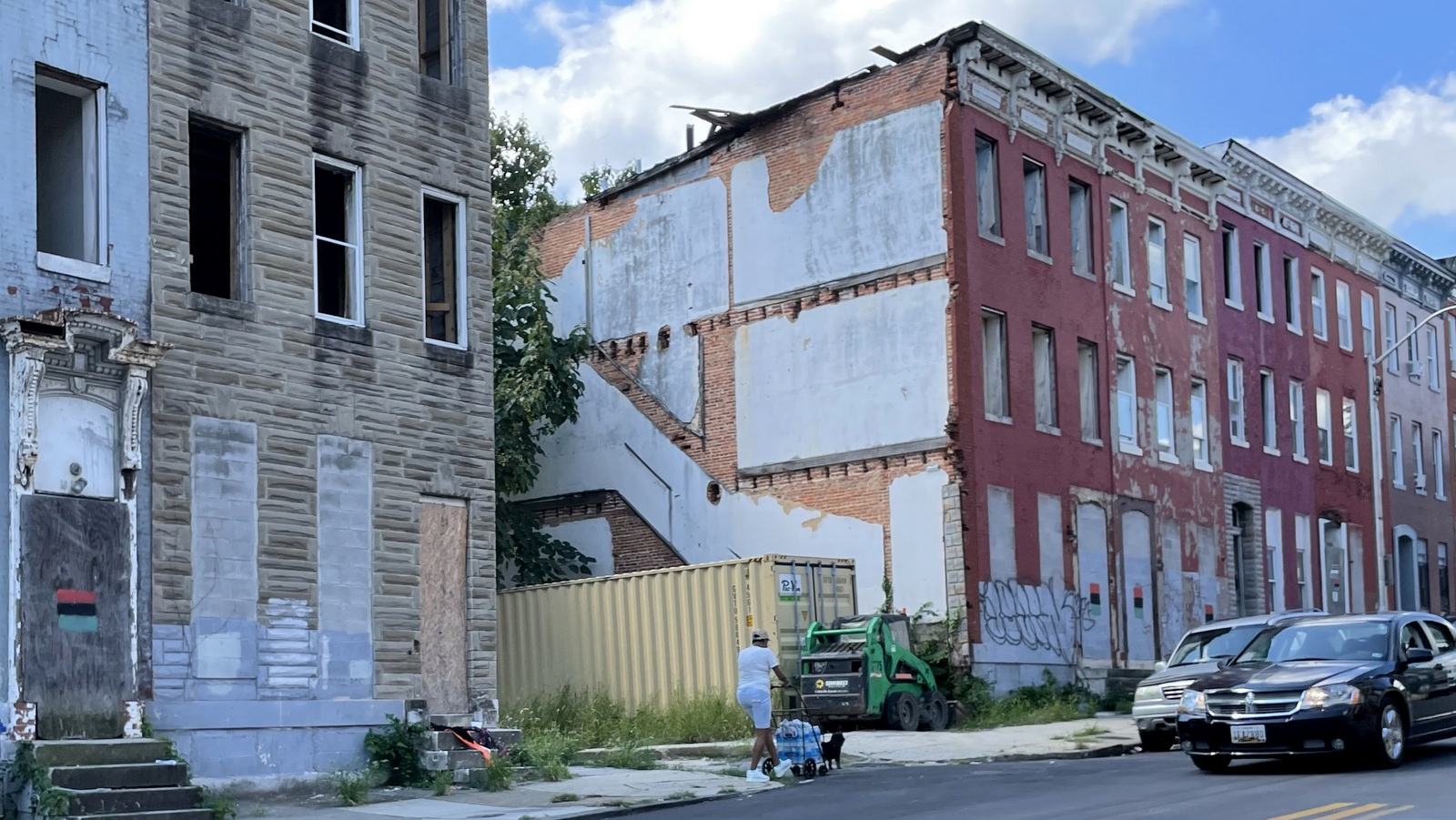 In Harlem Park, Sandra Holmes brings home bottled water she got from the distribution site set up after E. coli was found in the tap water there. (Fern Shen)

Today’s news conference was one of several organized by Scott in the wake of criticism since the first public notice about the contamination:

A confusing series of early morning tweets on Labor Day by the Department of Public Works (DPW) said health-harming E. coli bacteria had been found in West Baltimore water samples.

The contamination was limited to the three locations, the tweets said.

For many hours after that, City Hall and DPW were silent on the matter until an evening press release saying a boil water advisory was being issued for a 54-block portion of Sandtown-Winchester and Harlem Park.

Thousands more were impacted by a wider “precautionary” boil water zone – covering a wide swath of West and southwest Baltimore and nearby jurisdictions.

Appearing with Scott at today’s news conference, DPW Director Jason W. Mitchell was asked to explain how the advisory could be lifted while his agency had still not determined “root causes.”

“Over the last three days, we began to flush our system and tested over 100 locations within our city and we’ve seen negative results,” said Mitchell, noting that the city has been following Maryland Department of the Environment (MDE) guidance as it worked through the process.

“The water that’s flowing through our entire distribution system is meeting expectations,” Mitchell said, adding that DPW will continue to work to find the cause of the contamination.

Officials have ruled out any connection to the city’s water treatment plants or its highly troubled sewage facilities, and say they are now focusing on what Mitchell today called “the small box that you see on the map,” meaning Harlem Park and Sandtown-Winchester.

He mentioned construction sites, water main breaks and other repairs in the area as “leading candidates.”

Asked by a reporter if it may not be possible to ever figure it out, Mitchell agreed the search “could be inconclusive.”

Also speaking at the news conference was Health Commissioner Letitia Dzirasa, who provided an update on two cases of potential E. coli infections her department has investigated.

One of these was a child who had gastrointestinal issues and has since recovered. She said the child was never tested for E. coli.

The other case was a person who is currently hospitalized for E. coli bacteremia.

In Harlem Park and Sandtown today, contractors and crews from the Department of Transportation, DPW and Baltimore Gas & Electric were seemingly in every block.

The gutters of many streets featured water bypass lines – some old, some newly placed by the city to flush water out of the suspect system. 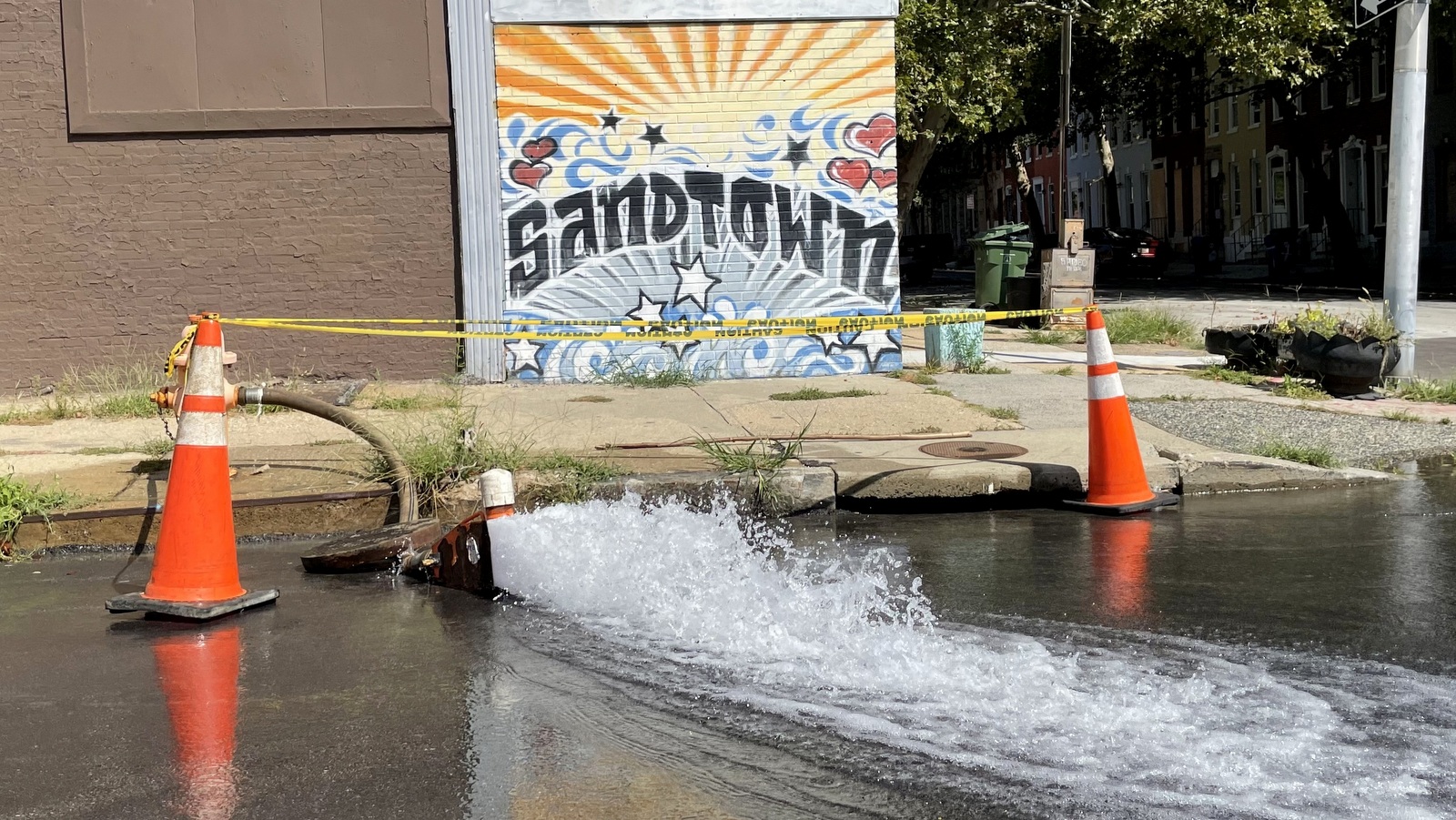 DPW continues to flush water out of the system in the area where routine sampling turned up E. coli contamination. (Fern Shen)

Amid the mystery of how the E. coli came to contaminate the area’s water, residents have been speculating as to the causes, with some wondering whether the proliferation of gas line projects this summer could have caused it.

BGE spokesman Richard Yost confirmed that the utility company is replacing aging pipes there. He pointed to the company’s Operation Pipeline map which showed the area where upgrades are planned over the next year. 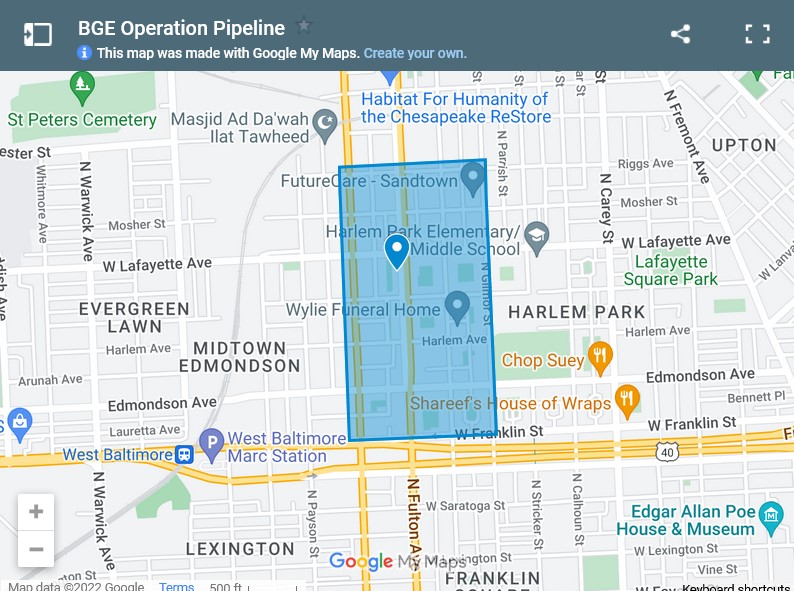 But he said although BGE has had courtesy conversations with the city regarding the incident, they’ve had no other interactions over the matter.

“There’s been no question that our work could have caused this. We’ve heard no questions or concerns from them,” Yost said.

A group of workers on Stricker Street today doing gas line replacement work (they said they were swapping in plastic pipe for metal) was asked about the the possibility their work could have caused it. 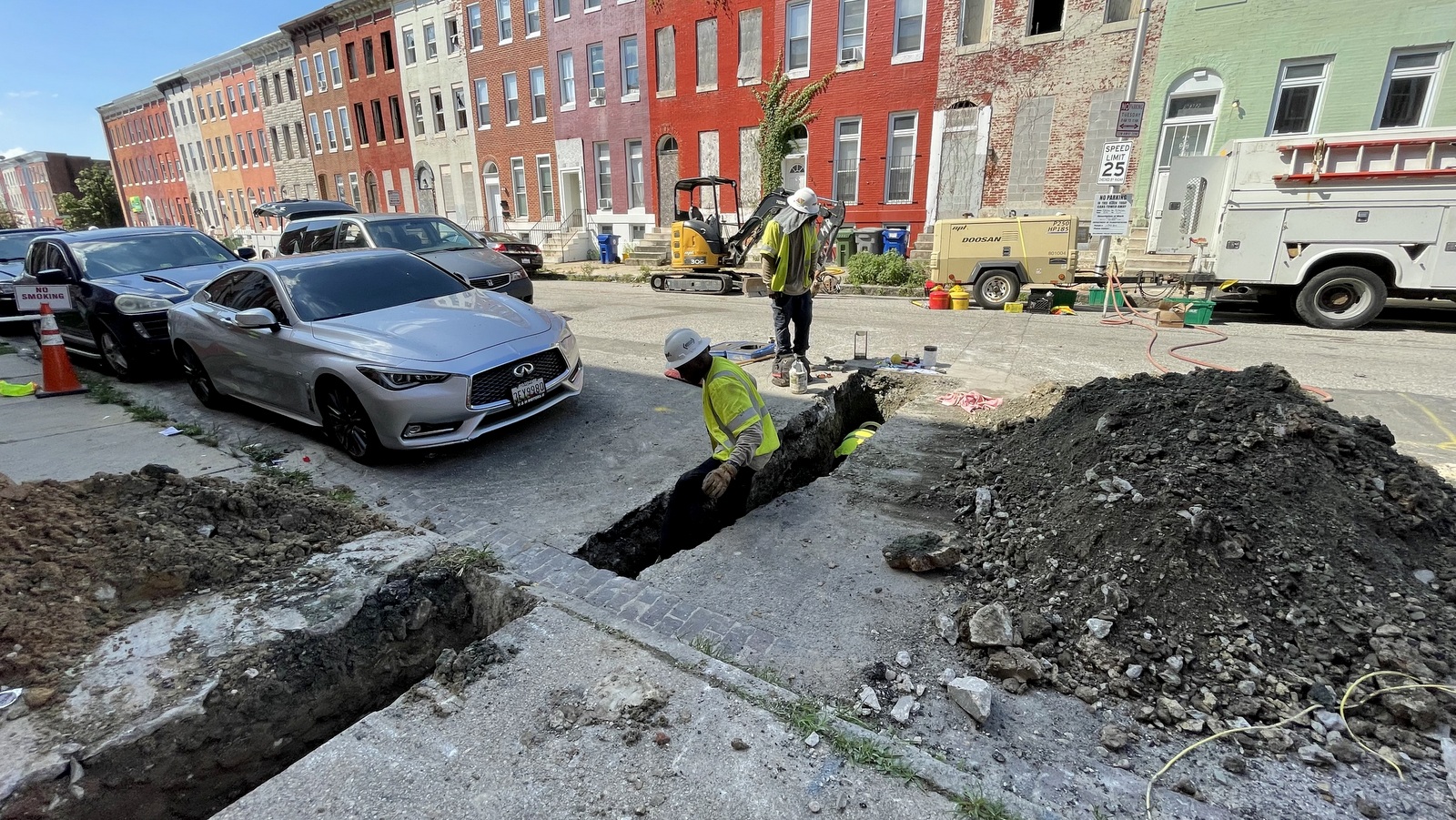 Gas line replacement project underway in Harlem Park today. “No way it could be connected” to the E. coli, one worker asserted. (Fern Shen)

“Not possible,” one said, pointing to the blue spray painted line several feet away from the trench he’d been working in. “That’s the water over there.”

But one of them was happy to point to the age of the metal gas lines they were getting rid of, pointing to the rusty looking segment they had just removed.

“That thing went in before Bible verses were written.”