Soaring police overtime has been a burning issue in Baltimore as the agency’s overall budget has ballooned, dwarfing spending for parks, roads, recreation centers, after-school programs, affordable housing and more.

But taxpayers’ complaints have prompted only hollow vows of reform from the last two mayors and the City Council.

Mayor Catherine Pugh now explains the absence of the police overtime audit she promised a year ago by saying it is “privileged” material, tied up in a legal case with the Fraternal Order of Police.

To better understand the dimensions of overtime at the BPD, Baltimore Brew analyzed payroll data between fiscal years 2012 and 2017, publicly available on the Open Baltimore website.

And we looked at individuals. We found officers with $200,000-plus annual salaries living in large suburban homes who out-earn the mayor and other top city officials thanks to generous overtime allotments.

•  One officer racked up $235,233 of overtime during a two-year period when he made fewer than two arrests a month. Based on his overtime payments, this officer consistently worked 75-hour weeks.

• A married couple got $697,955 in overtime over the last six years. Combined with their regular salaries, they earned more than $1.7 million and live on a three-acre spread in Harford County.

• The new captain in the Northwest District, whose FY2017 salary was $203,130, saw her overtime pay jump by 535% while she was mostly assigned to central records and handled between zero and three criminal cases a year.

Given his higher base pay, a lieutenant on overtime will make $100 an hour directing traffic at a parade, a police source said.

Our investigation found that the amount of overtime is larger than previous estimates and is growing at an alarming pace. 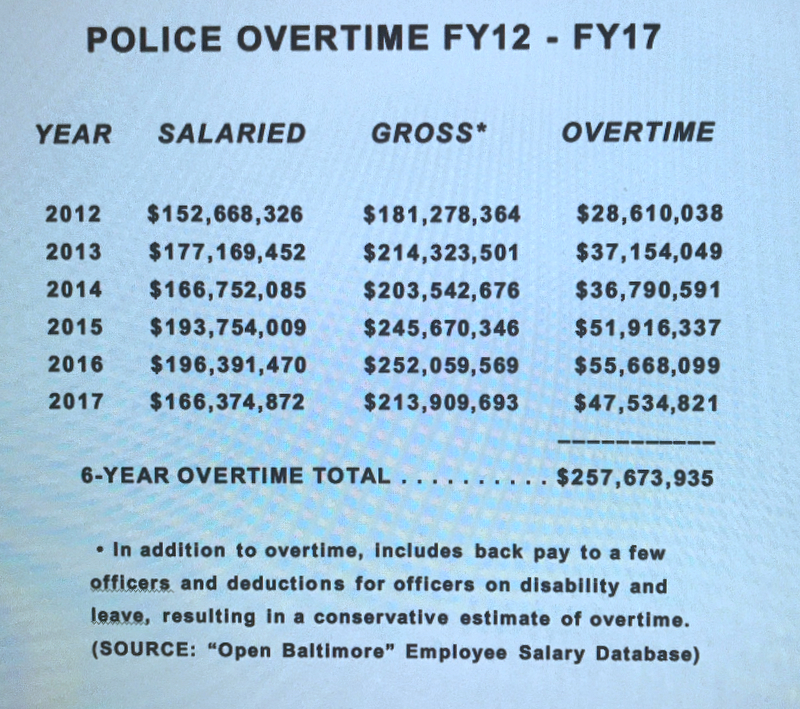 The phenomenon of high-earning but not-highly-productive officers is well known in police circles, according to a veteran officer who requested anonymity because department policy forbids police from talking to the press.

“We call them house cats. They stay inside the downtown bureaucracy and they’re not making a lot of arrests,” he said.

“But they can go work the footraces and festivals and special security details because they have desk jobs and can pick and choose the best assignments.”

“It’s all very loosey-goosey,” agreed another officer, who worked at the Southeast and other districts. “To tell the truth, the system is set up for people to milk it.”

“We call them house cats. They stay inside the downtown bureaucracy and they’re not making a lot of arrests.”

A retired career officer, with deep knowledge of the department, asked this: “Where’s the bang for the buck? The city is paying so much overtime, and the cops aren’t doing much. At best, they are being paid to act as scarecrows.”

“And where’s the accountability?” he asked. “Why isn’t the mayor screaming at the commissioner, especially with all the dirt that’s come out about the Gun Trace Task Force?”

Testimony revealed that abuse of overtime was not isolated to this single unit, but has become a systemic problem at the Baltimore Police Department. Getting supervisors to sign off on faked time sheets, as well as bogus arrest reports and phony search warrants, was no problem.

“Where’s the bang for the buck? The city is paying so much overtime, and the cops aren’t doing much.”

GTTF members were paid for hundreds of hours of unworked overtime – known as “G-days” and “slash days” – as an incentive to find guns. Sometimes they handed over the guns; other times they kept the guns, along with stolen money and drugs.

“Overtime was given with a wink and a nod right up the chain of command,” William Purpura, attorney for convicted GTTF detective Daniel Hersl, told jurors earlier this month.

Overtime is allowed in city government for “non-exempt” or non-management personnel at a rate of 1½ times regular pay for hours worked above 40.

According to the Baltimore Administrative Manual, which covers the police department, overtime is to be approved only in emergency situations, which are defined as “any condition which endangers safety, life or property or threatens the breakdown of vital services to the public.”

Overtime, the manual continues, should be granted only for tasks that cannot be accomplished during an employee’s regularly scheduled workday and should not become a regular occurrence. Or as the manual puts it, overtime must be limited to a “prescribed time when a deadline cannot be altered.”

Police overtime has evolved into a very different system. It has become an integral part of the lives of many officers, a jealously guarded perk and salary enhancer, justified by their higher-ups as necessary because the department is short of personnel.

Skyrocketing overtime comes at a time when the body count in Baltimore has surged from 218 homicides in 2012 to a record 343 homicides last year. To curb overtime abuse, BPD says it plans to roll out a fingerprinting system, requiring officers to scan their fingerprints at the start and end of each shift.

“We’re staffing that and we’re putting mechanisms in place as we speak,” he said, promising to discuss the matter in more detail at another time.

At a City Council hearing last year, BPD’s then-chief financial officer, Caroline Sturgis, said that 70% of the overtime is due to “staffing shortages as well as investigations and homicides.” (Sturgis now works at the city budget office that submits the BPD’s supplemental overtime appropriations that the City Council routinely approves.)

Mayor Pugh says her top priority is to increase recruitment and get more officers through the police academy and on to the streets. 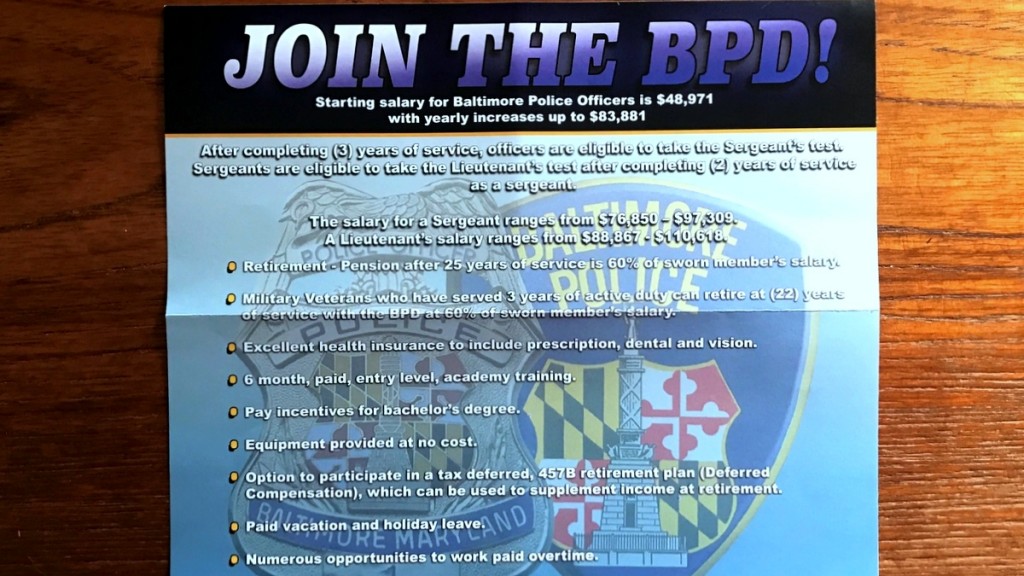 In its recruitment flyers, Baltimore Police advertise “numerous opportunities to work paid overtime” as a bonus for joining the force. (baltimorepolice.org)

But salary data suggests that, while street patrol officers receive overtime, there are additional key drivers of the 66% increase in overtime costs since 2012.

One of the most significant drivers is the increasing number of higher-ranked officers who receive overtime.

Sergeants and lieutenants, who were not paid overtime in the past, are now among its biggest recipients. With a base salary of $85,000 to $110,000, the 1½-time overtime multiplier becomes very attractive.

“If there’s a parade and they put out the word that we need 20 people for patrol, lieutenants can now work that,” another source explained.

“It’s nothing for them to pull down $10,000 over a few weekends. And from that, there’s another $10,000 from neighborhood festivals or Artscape or sports events.

“So, yeah, they’re not out there fighting crime, but, boy, they’re making money!”

BPD’s response to this series:

The police department requires reporters to make all inquiries through its Media Relations Office.

“This would amount to an MPIA [Maryland Public Information Act] request,” chief spokesman T.J. Smith responded, declining to provide answers and forwarding our questions to “the Document Collections Unit.”

The Brew copied its request for overtime information to Mayor Catherine Pugh’s media office. We have received no response.